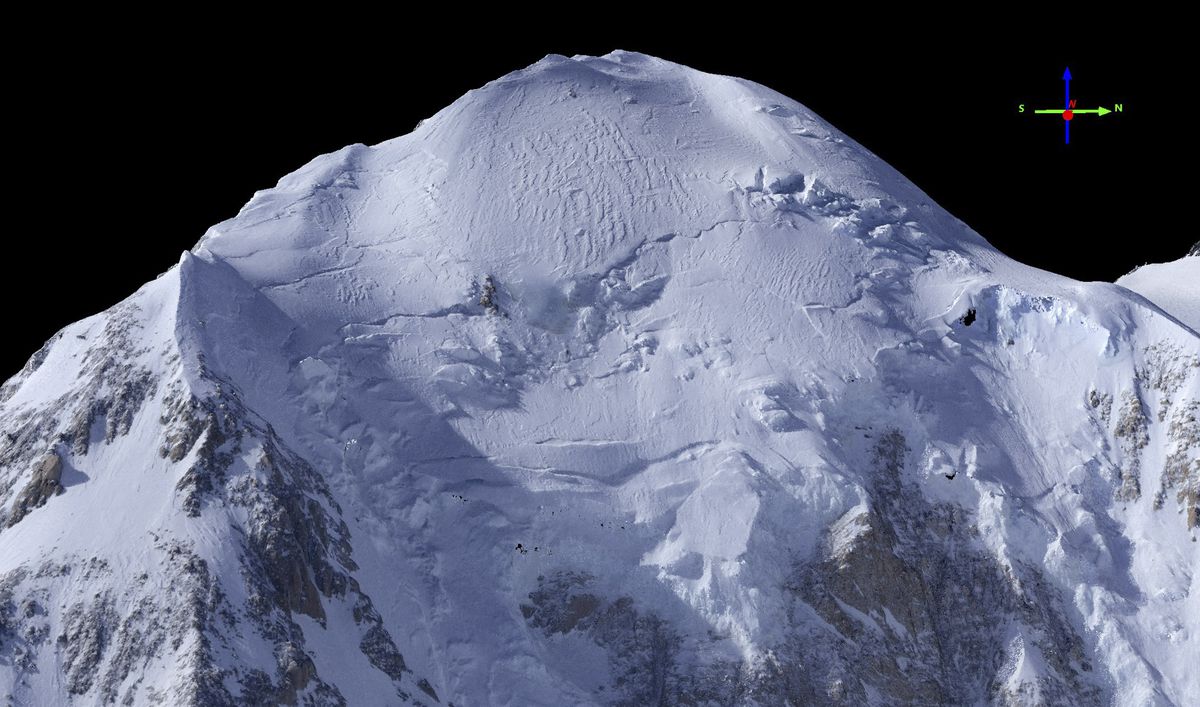 An image of Denali that Matt Nolan made from a fodar mapping mission in his Cessna 206. (Courtesy Matt Nolan)

An image of Denali that Matt Nolan made from a fodar mapping mission in his Cessna 206. (Courtesy Matt Nolan)

A Fairbanks scientist recently made an intricate new map of Denali while crisscrossing its summit a few times in a single-engine airplane. His top-of-the-continent measurement was within a few feet of a GPS reading done a few years ago, using a system he calls "fodar."

Matt Nolan is a former University of Alaska Fairbanks faculty member who is now in the business of precision mapping using his three aircraft equipped with fodar, a term he invented. It means "any photogrammetric process for quantitatively measuring both the color and elevation of Earth's surface using a small-format digital camera."

In previous glacier studies, Nolan had been frustrated with the expense of Lidar systems, which pilots carry over landscapes, bouncing laser pulses to the surface and back to determine elevations. He combined a digital camera with a GPS system while flying and refined it until it worked.

On April 8, 2018, he, fellow pilot Kristin Scott and their 12-year-old son Turner took off from Fairbanks on a nice spring day with calm winds.

They flew 150 miles southwest to Denali, the highest mountain in America. After flying over the summit several times and crunching the data, Nolan measured the height of Denali's south peak as 20,308.6 feet.

A GPS point measurement of Denali's summit height by climbers, including UAF's Tom Heinrichs in 2015, was 20,310 feet, with an accuracy of plus or minus one inch. That number, embraced by USGS officials, pushed out the old USGS map measurement of 20,320 that was the standard for decades. The 2015 expedition team also determined Denali's high point was on top of at least 13 feet of wind-packed snow that coated the ice or rock underneath.

The difference between Nolan's and the 2015 reading is something he expected, due to changes to the snow cornice covering the bedrock, which "could easily exceed a meter elevation in a single storm," Nolan said.

Nolan said the accuracy of his system allowed him to map the entire top of the mountain down to individual snow drifts, to within 6 inches accuracy. The next-best map he has is accurate to about 50 feet, he said.

"Had there been any climbing teams on the mountain, their tents and even their bodies would have become part of this map," Nolan said. "It's a new era for map making. What once took years to create can now be done in a few days at much higher resolution."

His map now exists in digital form but he may create a print version that would require a few more flights for more data points.

Nolan, Scott and their son made the flight from Fairbanks to a few thousand feet above Denali in Nolan's turbocharged Cessna 206. The turbo boost was needed to keep the engine running while flying at the high altitude. The three in the plane wore oxygen masks for the high passes over the mountain at 23,000 feet.

Nolan flew the Denali mission not only for scientific interest, but because he wanted to prove to himself that he could. He said he is not a mountain climber, but this mapping project presented the same type of challenge for him. Scott was along as a safety pilot. Completing the family outing was Turner, a home-schooler who would turn the mission into a geography project.

A correction from last week's column: Reader Vivian Mendenhall pointed out that the tropopause is between the troposphere (which is the air from sea level to around 6 miles up) and the stratosphere. And both are part of Earth's atmosphere.