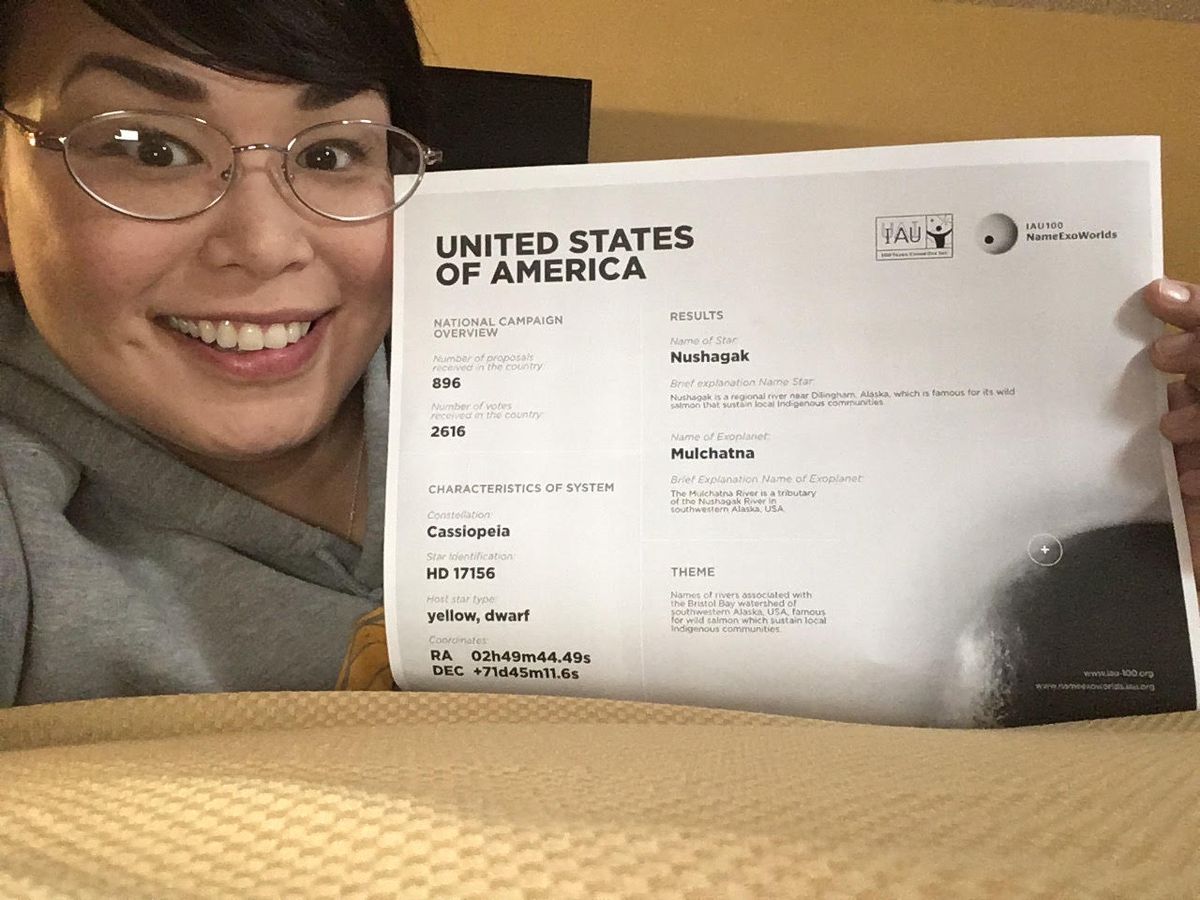 When Ivory Adajar, 36, received an email inviting her to watch a press conference in Paris announcing the new names of a star and exoplanet, she didn’t think a name she’d submitted would win.

Adajar, a member of Curyung Tribal Council in the Bristol Bay region, woke up at 5 a.m. Tuesday to watch the conference from North Carolina, where she currently lives with her husband and two children.

Then the International Astronomical Union announced it; the names she’d submitted — Nushagak for a star and Mulchatna for an exoplanet, named after rivers around her hometown of Dillingham — had been selected.

So, she called her dad.

When he answered, Adajar said, he sounded breathless and concerned over receiving a middle-of-the-night call from his daughter who lives on the East Coast. But quickly, his concern turned to pride, she said.

When the announcement was made, Adajar said she thought about her grandmother who, after losing her fisherman husband, went on to raise Adajar’s father on her own.

“She taught him everything he knows about fishing and living off the land there,” Adajar said. “And so it felt like my ancestors were cheering me on.”

The competition asked people around the world to submit name ideas for many of the universe’s recently discovered exoplanets. Those planets, which orbit other stars outside our solar system, number in the 4000s.

“While astronomers catalogue their new discoveries using telephone-number-like designations, there has been growing interest amongst astronomers and the public alike in also assigning proper names, as is done for Solar System bodies,” according to a statement from Eric Mamajek, a co-chair of the campaign’s steering committee.

Every country was assigned a star bright enough to be visible through a small telescope in that nation. The U.S. was assigned star HD 17156, in the constellation Cassiopeia.

The campaign also encouraged people who speak Indigenous languages to submit exoplanet and star names in acknowledgement of the United Nation’s 2019 International Year of Indigenous Languages.

Scrolling through social media, Adajar noticed an advertisement for the campaign and thought she didn’t have anything to lose.

Adajar sat with her son and husband. They thought for a while, and then it just came to her. Exoplanets revolve around stars “in a very eccentric and wiggly way," she said.

She saw a similarity between the path of an exoplanet and the path of a salmon, swimming out to the ocean and back to the rivers.

And so she decided the names of those rivers — Nushagak and Mulchatna, a tributary of the Nushagak — were fitting.

“I couldn’t think of a better way to honor my home and my people and my way of life there.”

Though she lives far from home, Adajar said she tries to come home during summer to spend time with family and to fish.

After the initial press conference, Adajar said she thought about her own children. Adajar said she wants to move back, raise her two boys in Dillingham and expose them to the fishing that has been so important in her own life.

Bristol Bay is the area of the proposed Pebble Mine, and while Adajar said she didn’t want to take her submission in a political direction, she did want to emphasize sustainability and preservation of the watershed.

“I wanted to immortalize what we have right now,” Adajar said.

Adajar said she hopes the win helps educate young people, both on the science of outer space and the importance of maintaining and respecting the environment on Earth.

“It feels really good to know that I was able to contribute to my heritage and my culture, my people.”