A winter journey along the Yukon River 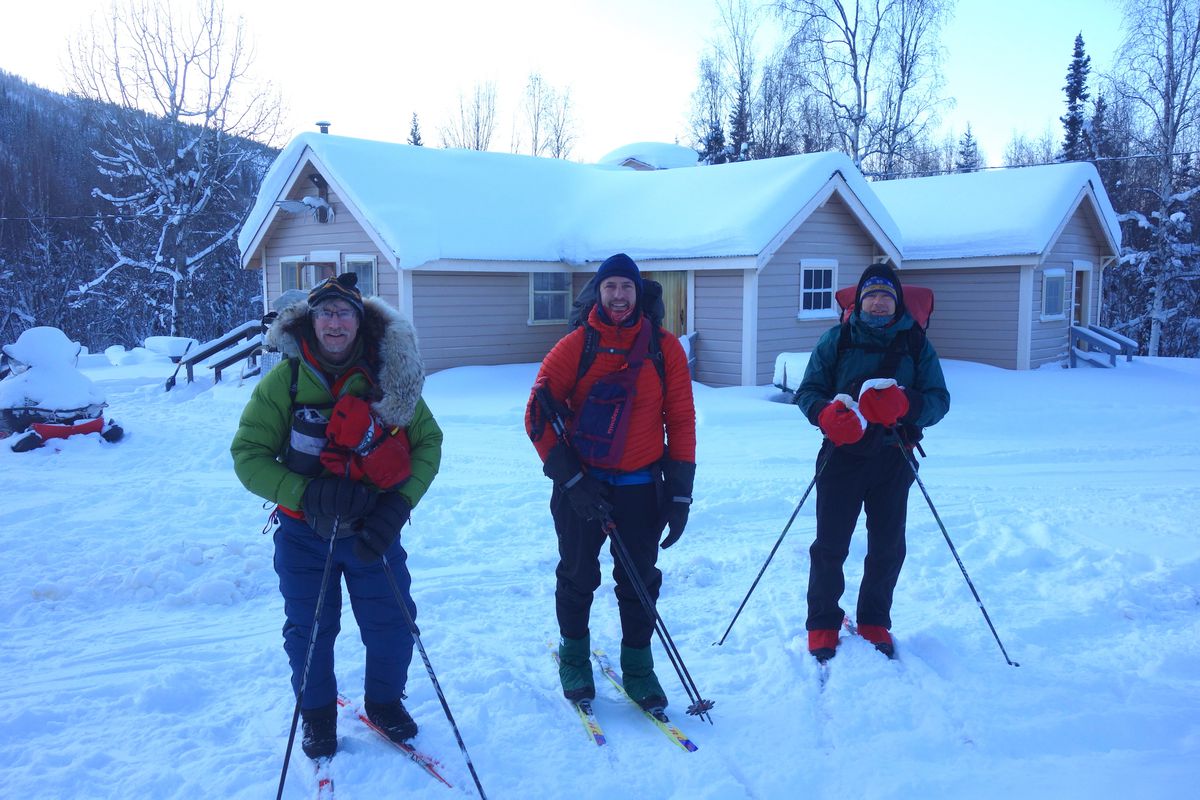 We just skied 100 miles of the frozen Yukon River, two friends and I, until it got too cold for our skis to glide, and we flew back to Fairbanks on a plane that landed on both skis and wheels.

Though my friends — Bob Gillis and Adam Bucki — are both scientists, this trip was not for science. It was an exploration of the big country between Eagle and Circle, Alaska, enabled by a trail packed by volunteer snowmachiners and dog mushers racing in the Yukon Quest International Sled Dog Race. The race alternates direction each year. This year, 15 mushers ran from Fairbanks to Whitehorse, Yukon.

Bob Gillis is a geologist for the state who once walked 20 miles barefoot on a painted white line of the Richardson Highway because it was the least painful way to get back to his car after a summer wilderness race.

I met Adam Bucki when he was a Geophysical Institute graduate student studying rock glaciers. He lives in Houston, Texas, now. The last time he was near Eagle, 20 years ago on a caribou hunt, his wife, Carrie, did the driving from Fairbanks as he scribbled captions for a scientific poster in the passenger seat. He mailed them to a co-worker from the Chicken post office.

I knew the Yukon River as it flows into Alaska from a couple summers as a park ranger in Yukon-Charley Rivers National Preserve. That was when Bill Clinton was president and the locals weren’t so enamored with the National Park Service.

The Yukon was new for Bob and Adam, and maybe they got tired of me stopping, pointing and saying things like “those trees are where Ed Gelvin’s A-frame was once, I don’t know what happened to it.”

The Yukon I knew back then was mostly the dimpled, liquid one, flat as a plywood sheet and hissing brown against the skin of your boat. This February blue/white river, ice chunks poking up like shark fins, was something new. I told Bob and Adam that maybe we could ski as fast as a canoe, but that turned out not to be true, maybe because when you snack in a boat you drift downstream.

Friends and I have, in the past, thought about skiing on the snow compacted to a 1,000-mile ribbon over river and hill that is the Yukon Quest trail. Bob Baker and Tim Kelley skied the entire thing once, 30 years ago. When Bob told me he and Tim had left a checkpoint when the dogs would not, because of a blistering cold wind, I knew I was not the same as Bob and Tim.

We never skied the Quest. My friends and I were always scared of the cold, the type that sinks heavy to the valleys of the Fortymile River and Birch Creek. This year was no exception.

Even in a time of warming, Alaska is still good at making its own cold. This January, Fairbanks’ average temperature was minus 21.4 degrees Fahrenheit. The high for the month was plus 4. Since feasible ski-trip temperatures range from about minus 10 to plus 35, we came up with some Plan Bs.

The week of the Yukon Quest arrived. As the calendar flipped to February, things changed, as they often weirdly do. Air temperatures warmed above zero, and the forecast promised more of the same. Bob, Adam and I caught a plane to Eagle.

Because we couldn’t fly from Fairbanks with the white gas for our mountaineering stoves, we bought some at the Eagle Trading Co. store. We filled our bottles outside in the wind. We gave the remainder of the $25 gallon can to John Borg, a principal character in John McPhee’s “Coming into the Country,” still maybe my favorite book.

John seemed happy to get the fuel. And it was good to see John’s old Chevy C-10 pickup was still running, as it has been since before McPhee’s book was published in 1976. Its blue camper shell was full of down-parka wearing checkpoint volunteers, on their way to the airstrip to fly to Dawson City ahead of the race.

We said goodbye to John and pulled on our backpacks. We followed the wooden Yukon Quest trail stakes down Eagle streets to the boat landing, our ramp to the frozen river.

Once launched onto Alaska’s largest river — which is a quarter-mile wide at Eagle — we felt a blustery downriver wind. But the breeze was at our backs. When we skied, sometimes it felt like there was no wind at all — until we stopped, and the breeze pulled heat from our sweaty clothes.

Our plan was to ski all the way to the town of Circle, which is 160 miles from Eagle. We figured we could manage about 20 to 25 miles per day, about the spacing of a few public-use cabins maintained by park rangers. We were prepared to sleep outside, and did, but never had to.

One of the reasons for all the indoor living was the hospitality of the few people who live on the river. Home visits were a big difference between summer travel by boat and winter travel by trail — the path of the Yukon Quest went right by the three houses of the folks that live on the river between Eagle and Circle. Those eight people are the only souls living in a space the size of Connecticut.

They included Andy Bassich, who has a multi-building clearing about 12 miles downriver from Eagle. Like the other people we met, Andy, who is not an Alaska Native, purchased land from an Eagle resident who was, and who had possessed a Native Allotment, a rare spread of private land along the Yukon.

When our noses detected a few molecules of spruce smoke, we knew someone’s place was ahead. Andy Bassich gave us a warm place to stay, spaghetti with moose sauce and a package of vacuum-sealed smoked salmon, dripping with fat. The other folks we met were also uncommonly generous.

Tim and Tova Henry, who live on Fourth of July Creek and burned just 11 gallons of gas last year for their generator to supplement their solar panels, handed us a bagful of cookies. Tim also dug out a can of epoxy for Adam’s not-fatally broken ski. Tim would not take the $20 bill Adam offered for it.

Nate and Ruby Becker of Wood Island fried us moose steaks, offered us floor space to sleep and made us true believers in the handpainted sign hanging from a tree at the entrance to their trail: All Are Welcome.

We also rested at historic cabins the park service has saved from decomposing. One of our favorites was cozy Nation Bluff Cabin, built in 1934 by Christopher “Phonograph” Nelson, who got his nickname from his understandable need to gab at visitors. Like all the cabins, Nation Bluff had dry firewood, usually yellowed spruce. At Nation Bluff, a ranger had left a crumple of newspaper and dry kindling inside the woodstove.

Like all trips, ours did not go precisely as planned. We were set up for and looked forward to meeting all the Yukon Quest mushers head-on. But we experienced that fun only once, with rookie Pat Noddin, on a narrow, wooded portage trail that cut off a river bend. As we plunged into knee-deep snow and his dogs chugged by, Pat said he was glad we weren’t a moose.

The front-runners, and most others, passed when we were sleeping. With no up-close race energy, we were left to notice other things, like the tracks of an otter sliding into an open hole on a Yukon tributary, the mountains shouldering up on both sides of the river, and quiet so intense I could count my heartbeats by listening to the pulse of my neck against my sleeping bag.

Another way our trip did not go as planned happened because of technology I could not have imagined when I was a park ranger in the 1990s.

When we reached the majestic, two-story Slaven’s Roadhouse 100 miles in, we had just finished a sublime day of skiing over fresh wolf and caribou tracks in February sunshine.

Earlier that day, near the Charley River, I looked at my handheld satellite texter and saw a blinking green light. My friend Andy Sterns had pinged me from Fairbanks. He told of a Special Weather Statement the folks at the National Weather Service office had just issued.

I texted a National Weather Service meteorologist friend for the forecast between Slaven’s and Circle. He said our nice weather window was about to freeze shut.

“Ski fast,” he wrote, noting that deep cold was oozing back to Yukon Flats, where the mountains of Yukon-Charley ramp down to low muskeg. There was a predicted low of minus 40 for a night we would be camping out.

Urp. But there was another option.

We knew there was a snow-covered airstrip at Coal Creek camp, about 4 miles from Slaven’s Roadhouse where we were, and that planes had probably used it during the race. We also knew that the Quest trail toward Circle had just blown in with 4 fresh inches of snow that fell overnight. That, and the descending cold, would have us lurching along at walking speed.

I texted Andy Sterns back. He booked a flight for us leaving the next morning from Coal Creek, on a Helio Courier with wheel/skis.

As the sun dropped behind Slaven’s Dome, we skied the 4 miles from the Yukon River to Coal Creek camp, an old mining compound now used by park service people. With the snow barking at our skis as the temperature plunged, Bob, Adam and I creaked past the silent monster of the Coal Creek gold dredge, and then on top of its wormy tailing piles. In 1936, that gravel had yielded 50 pounds of gold in the first two weeks of valley eating.

At headlamp time, we arrived at a tight, seldom-used public cabin at Coal Creek camp. We knew it was cold outside (and inside) when snow melting from Adam’s skis froze before the droplets could hit the floor.

The next morning, the thermometer outside the Coal Creek cookhouse read minus 36 F. I knocked, and entered the nearby cabin in which park service rangers Josh Spice and Nick Thompson were drinking coffee. That day, they would be snowmachining over nearby hills in search of a wolf collar that indicated the wolf had stopped moving, and was probably dead.

Rugged duty, I thought. Seeing them reminded me of when I was a ranger stationed at the same place, many full moons ago. Just before we skied off to the airstrip for our ride, Josh put into words what I had been thinking about the river and the mountains we had just shushed through.

“This place is not like Denali, where the mountain smacks you in the face,” he said. “It’s big, and lonely, and peaceful. You have to take your time with this place. You need to stop, breathe, and take it in.”