A tale of glacier mice and young love 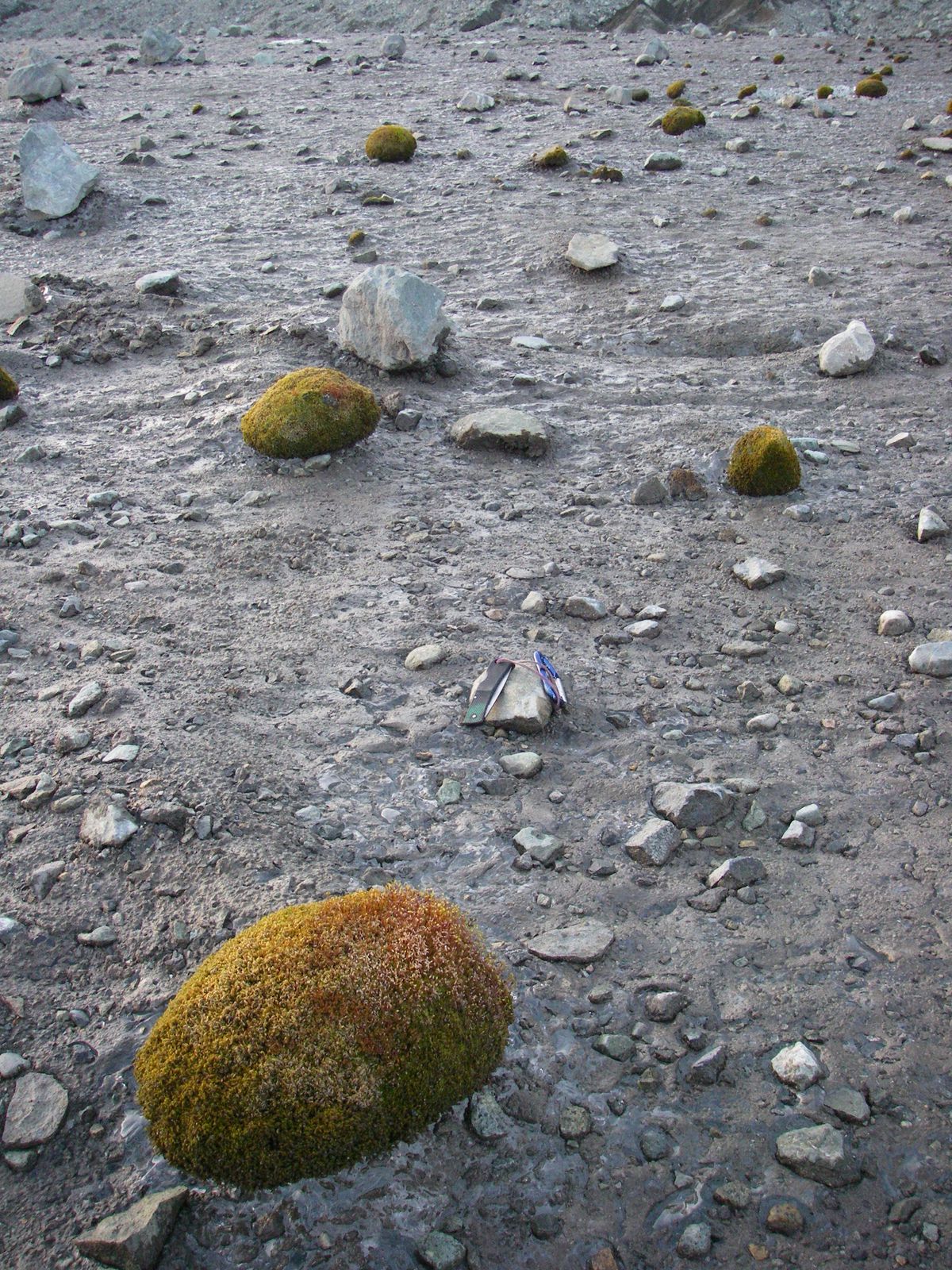 Glacier mice, or moss balls, on the Root Glacier near McCarthy. (Photo by Tim Bartholomaus)

Glacier mice, or moss balls, on the Root Glacier near McCarthy. (Photo by Tim Bartholomaus)

Glacier mice are soft green ovals, about as big as your hand. Each summer day, they creep an inch across the surface of some Alaska glaciers. They roam in groups, sometimes changing direction together like a herd of caribou.

Green and spongy, glacier mice are not really rodents at all. They consist mostly of moss, and are the subject of a recent published study. Two of its authors are former Alaska graduate students, who met and fell in love in the company of the little green pincushions.

Those two — Sophie Gilbert and Tim Bartholomaus — are now both professors at the University of Idaho in Moscow. She is a biologist, he a glaciologist. They met in McCarthy in 2006, when they were both involved with the Wrangell Mountains Center. She was wrapping up her undergraduate degree, and he a visitor graduate-student researcher.

Their recent paper about glacier moss-balls is the first one upon which they have ever collaborated. It is probably the only time during which their disparate areas of expertise would meet in a “Venn diagram,” Gilbert said.

She studies living creatures, such as blacktail deer in Southeast Alaska. He studies ice that behaves like a living thing: glaciers that grow and shrink and creep downhill.

When they met in 2006, Bartholomaus was studying the connection between water flow and glacier motion, and Gilbert was studying ecology and geology as part of a field course with other undergraduate students around the Root Glacier, near McCarthy and the ghost town of Kennicott.

The next year, then as co-instructors of the field course, they brought their students back to further investigate the moss-ball herd. In this expansive setting of a gorgeous ice plateau between high mountains, the pair noticed more than just tufts of moss. She saw a handsome young leader who wanted to solve glacier problems. He saw an attractive, worldly biologist who loved being outside.

“Powered by flirty energy,” as Bartholomaus put it, the pair began to think about how best to study the moss balls.

“We were young, excited about doing things together, and stretching our wings together,” Bartholomaus said. “We were also new as scientists. We started this project the summer before we started our Ph.D.s at UAF.”

The couple would later dive into their thesis projects — Gilbert examined the survival of young blacktailed deer in Southeast Alaska and Bartholomaus studied the complexities of Yahtse Glacier’s ice calving with the Geophysical Institute. But both kept coming back to McCarthy, a magic place for them.

If the study of glacier mice had scurried away from two scientists who became busy with funded projects, their friends would have understood. But they did not let that happen. With the help and enthusiasm of glacier biologist Scott Hotaling of Washington State University, they wrote a paper, published in 2020.

In the 11 years since when they started the study together and also got married, both have become seasoned scientists and university faculty members. But the research on glacier mice will be something they will always remember.

“It was exciting for us, and our first time, really, designing a study ourselves,” Bartholomaus said. “Doing our own science was a cool, novel challenge.”

Though they did not at the time know how to make sense of the information they would gather, for the glacier-mice study they borrowed techniques from both of their disciplines.

So they could find the same glacier mice later, Gilbert and Bartholomaus marked individuals with beads similar to those that might be on a leg-tag of a bird. They measured how much the glacier was melting each day with stakes common to glaciologists.

Years later, using techniques they had honed over the years from their different specialties, Gilbert, Bartholomaus and Hotaling found a few interesting things.

One was that the glacier mice probably formed when moss spores from a nearby mountain blew onto the dirty ice surface and found it to their liking. Another was that glacier mice probably moved by falling again and again off ice pedestals of their own making. It is perhaps similar to a phenomenon Alaska drivers see in springtime, when roadside pieces of cardboard insulate the snow beneath from the sun, and a stem develops, from which the cardboard eventually falls.

Maybe the most exciting results were that the moss balls were moving as a herd, in a direction not explainable by the glacier’s downhill flow. The moss balls were first moving to the south during their study, but after a month they almost all changed direction, and started rolling west. The scientists could not explain the movement by correlating it with gravity, nor the prevailing wind direction.

That mystery remains for future students of the Wrangell Mountains Center in McCarthy, where Bartholomaus and Gilbert return almost every year; they are both members of the board for the organization responsible for bringing them together.