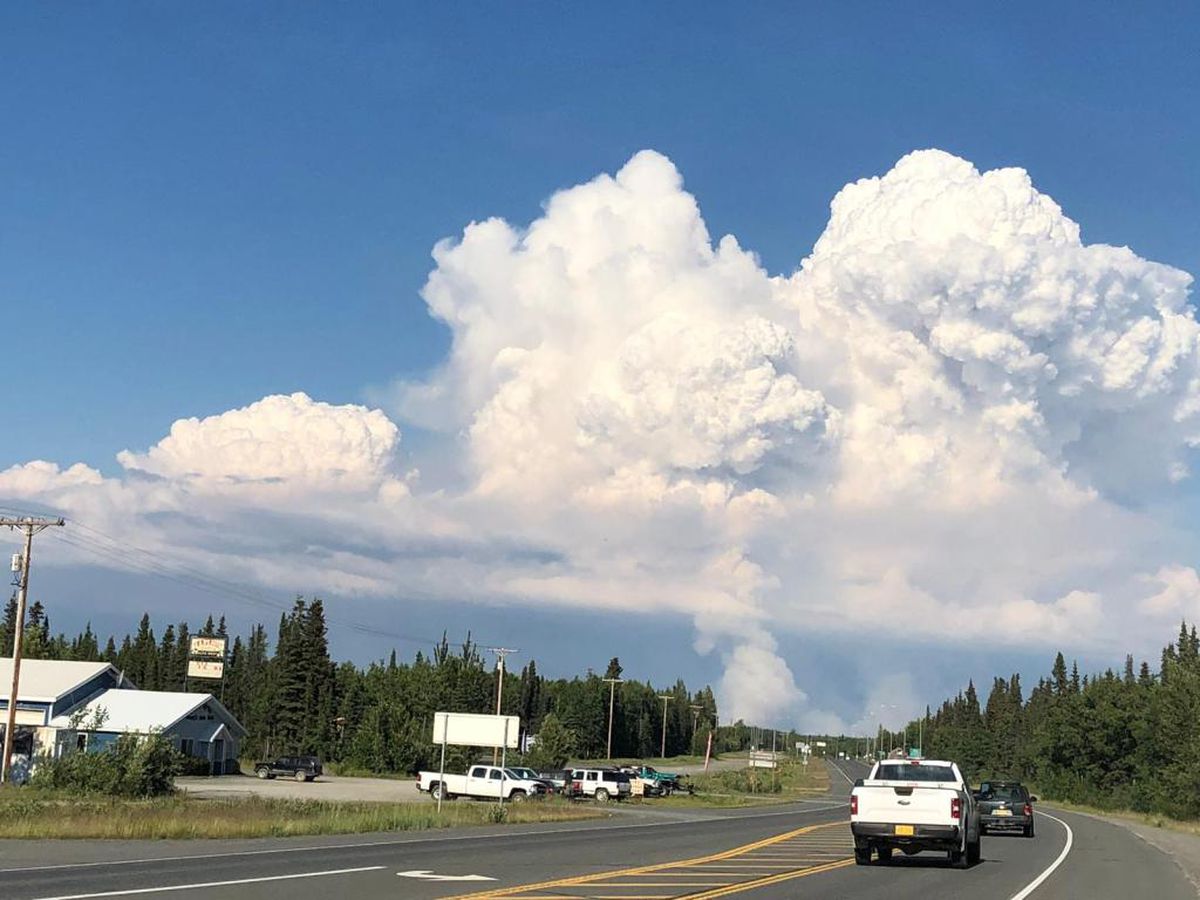 Pyrocumulus cloud over the Swan Lake Fire as seen from the Sterling Highway on the northern Kenai Peninsula this week. (Alaska Division of Forestry photo)

Pyrocumulus cloud over the Swan Lake Fire as seen from the Sterling Highway on the northern Kenai Peninsula this week. (Alaska Division of Forestry photo)

A major wind shift on the Kenai Peninsula was expected to give firefighters a shot at a “strategic burn” Tuesday to keep the still-growing Swan Lake wildfire off the Sterling Highway.

The fire grew by about 5,000 acres to 37,354 acres by Tuesday morning and generated a pyrocumulus cloud that rose 30,000 feet into the sky, according to fire officials. But a wind shift -- blowing out of the south instead of out of the north -- kept the blaze about two miles from the only road that runs from the north end of the Peninsula south to Homer.

“It’s gonna take the fire another day or so to progress toward the highway,” public information officer Kale Casey said in a video update Tuesday morning.

Fire managers hope to stop the fire north of a Homer Electric Association transmission line near the highway by burning a buffer that gives the flames less fuel to consume.

Drivers should expect areas of smoke on the highway through the day and be prepared for delays between Mile 62 and 72, officials warned. Motorists are encouraged to plan ahead, top off gas tanks, bring extra ice for fish, food and snacks.

“The next several days, there’s going to be periods of smoke. There will be periods of very clear (skies)," Casey said. "It depends on when the winds shift and which direction they’re coming from and what time of day, and whether there’s a marine layer or not.”

The Swan Lake fire grew from 25,100 acres Sunday to 32,300 acres Monday and moved to within two miles of the Sterling Highway and a major transmission line after jumping containment lines and pushing east and south, according to an update from the BLM Alaska Fire Service.

But crews strengthened existing containment lines to block the fire’s spread toward the community of Sterling, about 5.5 miles away.

The fire, in wilderness on the Kenai National Wildlife Refuge, is consuming a volatile mix of black spruce, which hasn’t burned in more than 70 years, and white spruce, half of it killed by beetles and standing dead.

“That’s a lot of fuel with that black and white spruce. It’s also really close together,” said Emery Johnson, a public information officer with the Alaska Division of Forestry.

Nearly 400 firefighters had contained about 9 percent of the blaze, up from 3 percent on Sunday, Johnson said.

“The refuge does want that area to burn to promote new growth ... but our job is to hit that southeast part to prevent it from coming toward the highway and the transmission line," she said.

The highway was “very smoky” as of early afternoon, according to the Kenai Peninsula Borough.

Forecasters warned of increased smoke in the Anchorage Bowl and Mat-Su area through Wednesday and the area remained under a state air-quality advisory.

By mid-week, shifting winds are expected to send smoke toward Cooper Landing and Moose Pass, the Department of Environmental Conservation said in a new advisory released at 4 p.m. Monday.

Smoke from the #swanlakefire will be on increase across Anchorage today into Tues. Get all your weather at https://t.co/Yepna3RzCk#akwx pic.twitter.com/sv9kzL73vD

The fire was started by lightning in early June. It was one of 321 burning on more than 180,000 acres across the state as of Monday.

The weather on the Kenai is warm and dry with persistent winds from the northwest, according to the update. This pattern is expected for the next several days.

“Motorists are advised to use caution on the highway as smoky conditions reduce visibility. Please drive carefully, use headlights, and give the right-of-way to any fire traffic in the area,” the update says. “This is a dynamic situation that can change rapidly. Allow extra time to reach your destination and all highway travelers are encouraged to be prepared for delays.”

At the request of fire managers, Homer Electric Association Inc. de-energized the transmission line that connects Bradley Lake Hydroelectric facility to the rest of the Railbelt utilities. Crews worked near the line several hundred feet north of the highway on Monday, Johnson said.

The refuge also closed the Skilak Wildlife Recreation Area to the public due to the fire’s progress to the south, she said.

The state on Monday issued a burn suspension for the Kenai Peninsula. That means open burning -- including in burn barrels -- is not allowed. Campfires are, but they can’t be bigger than 3 feet by 3 feet.