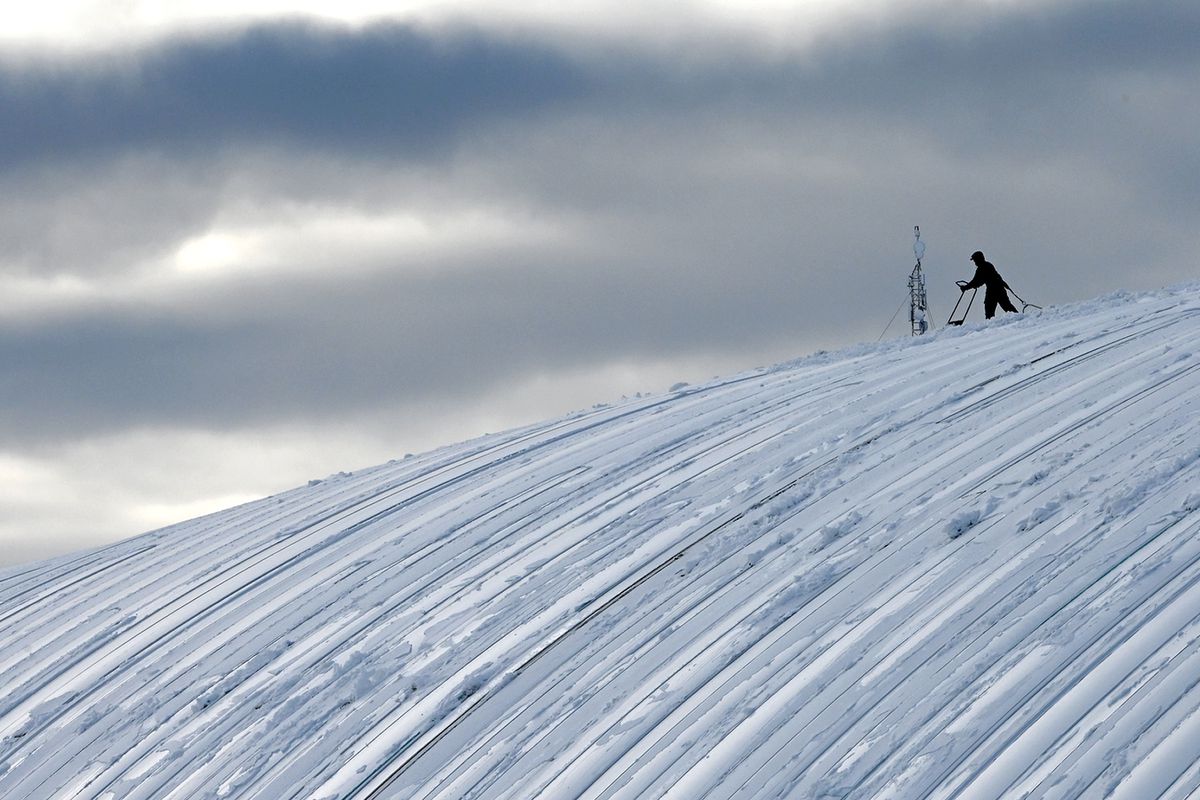 Scott Ezell with Chinook Roofing shovels the recent snowfall from the roof of The Dome on Wednesday, Feb. 19, 2020. (Bill Roth / ADN)

Scott Ezell with Chinook Roofing shovels the recent snowfall from the roof of The Dome on Wednesday, Feb. 19, 2020. (Bill Roth / ADN)

As snowfall tapered off throughout the day Wednesday in Anchorage, forecasters said they were expecting light snow in the evening and snowfall to pick back up by Thursday afternoon.

Less than an inch of snow may fall in Anchorage on Wednesday evening, but it will likely be concentrated in the Hillside area, according to National Weather Service meteorologist Kimberly Hoeppner.

Another 3 to 4 inches of snow is expected to fall from Thursday afternoon into Friday evening over an area spanning from Anchorage up through the Susitna Valley to Talkeetna, Hoeppner said.

Since the storm moved in Tuesday, a total of 10.8 inches of snow had fallen at the weather service’s Anchorage office near Kincaid Park, including 1.9 inches that accumulated Wednesday.

Temperatures Thursday and Friday are expected to stay around 30 degrees but will likely drop to the mid-teens and low 20s by the weekend, Hoeppner said.

On the other side of Prince William Sound, the Richardson Highway was closed Wednesday between Mile 18 and Mile 45, at Thompson Pass east of Valdez, because of an avalanche at Mile 32. Deep, drifting snow on the highway contributed to unsafe driving conditions, the Department of Transportation said.

The #RichardsonHighway is currently CLOSED at Thompson Pass. An extreme winter storm has created zero visibility...

Avalanche danger is high from Turnagain Pass on the Kenai Peninsula to Hatcher Pass in Mat-Su, according to the Chugach National Forest Avalanche Information Center. Natural avalanches are possible and human-triggered avalanches are likely, the center said.

The new snowfall mixed with temperatures in the 30s could cause roof avalanches, the center warned.

Rain followed by heavy snowfall Tuesday made driving treacherous at times and forced cancellation of after-school activities in Anchorage and Mat-Su.

The daily Anchorage snow record was broken Tuesday with 8.9 inches, among the 10 snowiest February days recorded in the city. The previous record for Feb. 18 was 6.2 inches in 1967.

The Tuesday high temperature in Anchorage, recorded just after midnight, was a record-tying 44 degrees.

Palmer saw 4 to 8 inches of snow Tuesday, and Markle said some parts of the Knik River Valley saw a foot of snow. There was 6 to 12 inches recorded across Eagle River.

Markle said the Susitna Valley saw up to a foot, with 12.4 inches recorded on Talkeetna Spur Road.

“It was a pretty impressive storm,” Markle said. “Maybe once or twice a season we get a significant snow like this and this is the second so far and could be compared to the one on New Year’s Eve and New Year’s Day.”