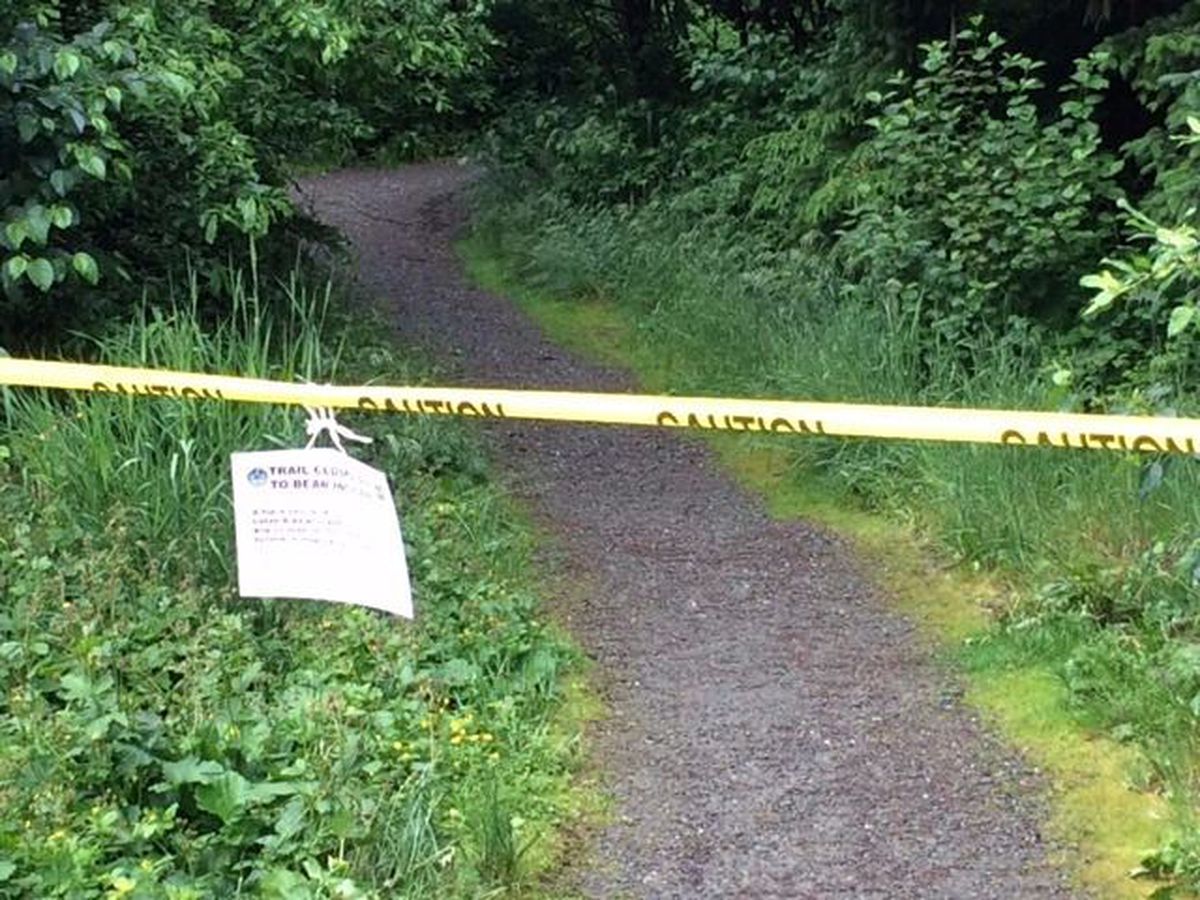 Trailheads leading into the Dredge Lakes area in Juneau have been temporarily closed as the Alaska Department of Fish and Game investigates a bear attack without injuries in the area. (U.S. Forest Service, Tongass National Forest)

Trailheads leading into the Dredge Lakes area in Juneau have been temporarily closed as the Alaska Department of Fish and Game investigates a bear attack without injuries in the area. (U.S. Forest Service, Tongass National Forest)

Trailheads leading into the Dredge Lakes area in Juneau have been closed due to a bear attack on a dog and its owner, who walked away without injuries, a wildlife official said.

The Alaska Department of Fish and Game received a report at 9:40 a.m. from the man who was attacked in the popular recreational area, but the encounter with the black bear sow happened about three hours earlier near Glacier and Moraine lakes, said Fish and Game wildlife regional supervisor Ryan Scott.

The black bear initially chased the man's Rottweiler, but when the owner started yelling at the animal, it shifted its attention to him, Scott said.

"He got down on the ground, apparently, and the bear was on top of him. He was fighting back — kicking and whatever he could do to keep her off of him," Scott said.

The bear neither bit nor scratched the man, Scott said.

"At present, he has no injuries that we know of," he said.

The bear eventually left the area, and Scott credits the man's fighting back for his lack of injuries. The attack appears to be defensive in nature; the man reported seeing a single cub up in a tree during the encounter.

Scott said he could not confirm whether the dog was on a leash, but the obtained information suggests it wasn't.

John Neary, director of the Mendenhall Glacier Visitor Center, said the trails will remain closed, possibly for a day or more, while Fish and Game investigates the encounter.

"They're going to remain closed until Forest Service and Fish and Game are able to consult about what is the danger and how long it may last," Neary said.

Officials, including Scott, searched the trails Friday but did not spot a single bear. They hoped to assess the bear's behavior around humans. Scott said he intends to periodically return to the trails to conduct the "behavioral assessment."

Female black bears with cubs are very common in the Dredge Lakes area, Neary said. Families were spotted frequently through May and June, he said.

Sows prefer to hang around Steep Creek near the Mendenhall Glacier Visitor Center, Scott said. He is aware of two females with three cubs and another mother with four cubs.

"The one that was involved in this morning's incident seems to be a little bit on the outside, the edge of where the rest of the females are usually found. And it's the only one with one cub," Scott said.

Many access points go into the woods around the visitor center. The man who was attacked entered the area using a trailhead at a dirt parking lot used by tourist buses. Most visitors do not use that specific trail unless accompanied by a guide, Neary said. Outdoors enthusiasts will have to stay off the trails for a short while, but they'll return, and Scott wants to remind people to be bear aware.

"This time of year bears are very active, and we encourage people to travel in groups and make lots of noise. If you're going to have a pet with you, please put it on a leash. We don't want pets, people or bears to get injured."