There's more than one way to cook a reindeer 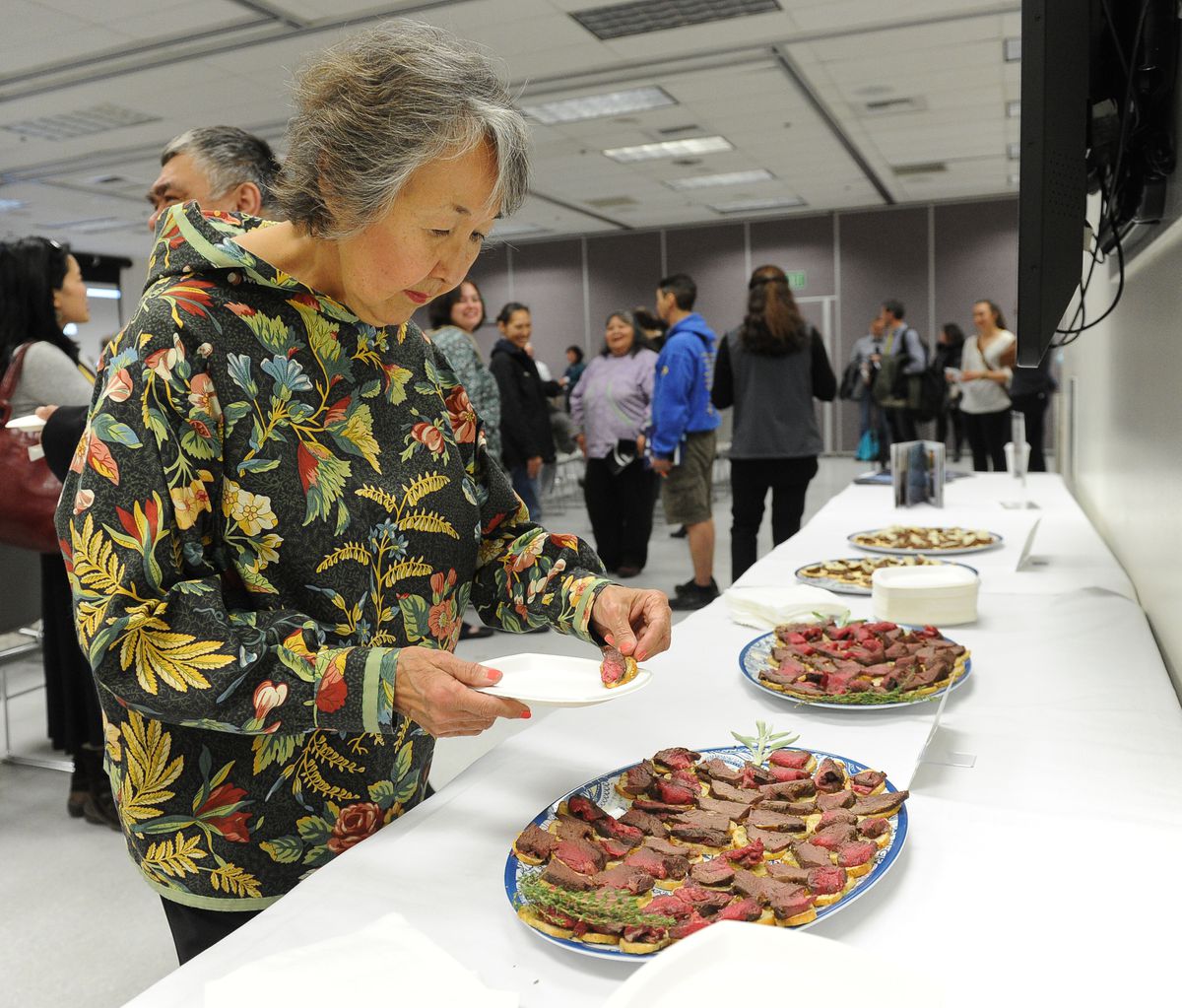 Pearl Johnson, with the Midnight Sun Reindeer Ranch, samples some of their reindeer snacks at Perspectives in Circumpolar Reindeer Production at the Arctic Council event at the University of Alaska Fairbanks on Wednesday. (Bob Hallinen / Alaska Dispatch News)

Pearl Johnson, with the Midnight Sun Reindeer Ranch, samples some of their reindeer snacks at Perspectives in Circumpolar Reindeer Production at the Arctic Council event at the University of Alaska Fairbanks on Wednesday. (Bob Hallinen / Alaska Dispatch News)

FAIRBANKS — Jessica Macaraeg is the daughter of an Inupiat reindeer herder and a formally trained chef who collaborates with her mother, Ann Davis, to apply complex culinary techniques to a meat that's traditionally prepared in simple ways in the Arctic.

For their garlic herb crusted reindeer, they marinated the back strap — the muscles paralleling the animal's spine — overnight in garlic, thyme, sage, olive oil, salt and pepper. They cooked it at 450 degrees until it reached an interior temperature of 140 degrees and immediately removed it from the heat.

They served juicy coins of the meat on thin slices of toasted sesame baguette.

"If you cook reindeer up to 140 degrees, it's very tender, but if you cook it above 140 degrees, it gets very tough and you have to spend another two hours cooking it to soften it up," Macaraeg said. "We have to watch it very carefully."

Macaraeg and Davis, were serving their creations to a crowd intimately familiar with the raising and eating of reindeer. Reindeer herders from across the Arctic were meeting in a classroom at the University of Alaska Fairbanks to discuss husbandry and cooking techniques.

They were in town for the biannual ministerial meeting of the Arctic Council, the main international forum in the region.

Dozens of reindeer eaters were also in attendance, lining up to taste the fare created by Davis and Macaraeg as well as traditional reindeer preparations from around the Arctic. There was fried reindeer heart, slow-cooked ribs and brisket.

Faye Ewan, who comes from the Alaska Native village of Kluti-Kaah just south of Glennallen in the Copper Center area, said she can taste the difference between reindeer depending on how and where it was raised.

Macaraeg's reindeer, from her family's Midnite Sun Reindeer Ranch near Nome, is fed on a diet of oats and barley, but also grazes on lichen.

And indeed, she took second helpings of the garlic herb reindeer and the mother-daughter team's other appetizer, reindeer braised in Midnight Sun Kodiak Brown Ale.

Their recipes were a clear departure from the traditional recipes found in a reindeer cookbook featured at the meeting. That cookbook features recipes from indigenous cultures around the circumpolar north and was produced under the U.S. chairmanship of the Arctic Council.

Finland took over the two-year chairmanship on Thursday.

The 160-page cookbook brings to mind Bubba, a fictional character from the movie "Forrest Gump," who is obsessed with the many ways to prepare shrimp.

Certain parts of the animal are particularly good for babies and young people, according to tradition.

The spleen, say the Sami, is a "very good food for young babies, being good 'food training' and being easy for a baby to suck."

In culture of the Nenets, an indigenous people of the Russian Federation, "the head is a stand-alone dish that is usually served to children."

Reindeer herding has a much shorter history in Alaska than in northern Europe and Russia, where entire cultures are based on the nomadic herding of reindeer.

Sheldon Jackson first brought the domesticated animals into the Territory of Alaska in the late 19th century. They are so closely related to wild caribou the two species can mate.

The cookbook also details how different cultures slaughter, preserve, prepare and eat reindeer and the reasoning behind the methods. The Nenets of Russia strangle reindeer with a rope to preserve all the blood, which they drink, and to retain the juiciness of the meat. The Sami kill reindeer with a knife to the heart.

Macaraeg's father, Bruce Davis, said he shoots them with a rifle. His use of a more recently developed, Western technology for dispatching reindeer is right in line with his wife and daughter's experimental cooking techniques.

He said with the help of his family, he'd like to grow the herd of 150 to 3,000, bring in slaughtering equipment that meets U.S. Department of Agriculture standards and commercialize the operation.

As the crowd mingled and sampled the array of reindeer dishes, Greg Finstad, program manager of UAF's Reindeer Research Program, led a real reindeer to the front of the room.

Upon entering a windowless place in which dozens of people were eating reindeer meat and presenting ways to raise, slaughter and cook it, the animal urinated on the floor.