What’s new, what to do at the Alaska State Fair 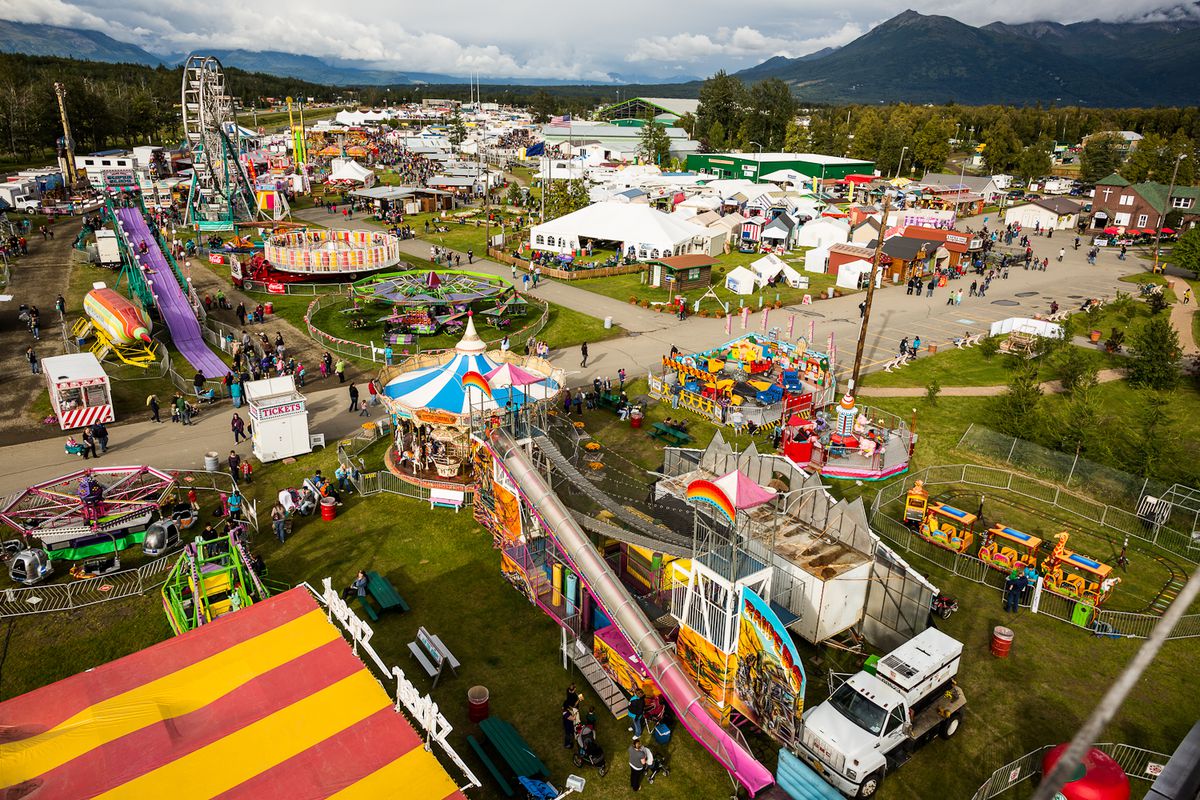 The Alaska State Fair has packed its schedule full of fun activities and concerts to send the summer off with a bang.

According to the state fair, about 294,500 Alaskans made their way to the fairgrounds in Palmer last year for carnival rides, cotton candy and barbecued turkey legs. This year, attendees will find some new attractions, including two new food vendors: Crepe de Paris, serving up sweet and savory crepes along the green trail, and Rebel Riders Roundup, serving burgers and dogs on the yellow trail.

Here are some highlights — from classic attractions like the Lumberjack Show to newcomers like the Silent Disco Party. Visit alaskastatefair.org for full event listings.

Giant pumpkin and cabbage weigh off

The heaviest cabbage ever recorded anywhere in the world was a 138.25-pound monster grown by Scott A. Robb in Palmer in 2012. Cabbage and gourd growers from around the state will compete for the chance to write their name in the history books. Check out their produce and cheer on the big efforts of the littlest growers in the junior division.

Whose vehicle can withstand the most damage? The annual demolition derby returns and promises to be a loud, fast-paced display of destruction. $12 for ages 13+, $8 for kids age 6-12. Kids under 5 get in free.

Performing daily, Spenard Builder's Supply Woodlot, 1 p.m, 3 p.m. and 5 p.m.
Watch world-champion lumberjacks battle it out in the "Olympics of the Forest," while comedy routines keep everyone laughing. This fast-paced show features the same events showcased in ESPN's Great Outdoor Games and the Lumberjack World Championships.

Irene Bedard is an Alaska Native and First Nations actress who voiced Pocahontas in Disney's 1995 animated film and starred in the 1998 film "Smoke Signals." She'll conduct a series of talks on aspects of Alaska Native culture and heritage with guests including: Samuel Johns, motivational speaker and founder of the Forget Me Not movement, on Aug. 24; Yupik singer and drummer Ossie Kairaiuak on Aug. 25; 2017 Miss Alaska Alyssa London on Aug. 26; Marjorie Tahbone, 2015 World Eskimo-Indian Olympics salmon filleting world champion, on Aug. 29.

On the Dena' Stage. Check alaskastatefair.org for times.

Silent discos are popping up all around the country, and for the first time the Alaska State Fair is joining in. Silent Events, the company responsible for Bonnaroo's silent disco, will provides headphones and tunes. Free with fair admission.

8:30 p.m. Thursday-Saturday, Aug.31-Sept. 2. Kids silent disco with Clifford the Big Red Dog will be on the same days at 5 p.m. All at the Borealis Plaza Tent.

Spirit – The 7th Fire of Alaska

This year's special exhibit features instruments and musical history from around the world. Hang out at the listening pods and check out educational exhibit stations.

For parents looking for a good deal, Kids' Day is the best time to head to the fair. Children 12 and under get in for free with the donation of two canned goods per child. There will be family friendly-activities taking place all around the fair. Make sure to take the kids to meet and greets with Daniel Tiger and Clifford the Big Red Dog at the Midway Carnival Stage.

Children can compete in races and games like the wheelbarrow race, frog jump, potato sack Race and pie eating. Kids have a chance to win their very own ribbons and prizes. For children ages 5 to 9.

Visit the fair's annual reptile exhibit for a look at some of Earth's most fascinating creatures. Interact with live reptiles, amphibians and other exotic species from around the world. A great stop for any child who's an animal lover.

For parents looking for a quiet place to bring the kids in the chaos of the fair, head to the family rest stop on the south end of the red trail. This quiet space provides parents and kids a little reprieve from the noise and business of it all. Change diapers, breastfeed or simply let the kids run around and play.

Stopping at the farm exhibits is a must for many families. After checking out all the adult livestock, head to the petting zoo to mingle with all the baby animals. Kids will get the chance to interact with baby goats, pigs and more.

Home Free is a country a cappella group that won season four of NBC's reality-singing competition, "The Sing-Off." Since then, they've released four studio albums and become an internationally touring act. $25 plus fair admission.

A multi-platinum-selling country singer based in Nashville, Tennessee, Josh Turner is one of the youngest people invited to become a member of the Grand Ole Opry. His hits include "Your Man," "Time Is Love" and "Why Don't We Just Dance," as well as current Top 20 country hit, "Hometown Girl." $35 for lawn; $55 for reserved seating (plus fair admission).

Australian rapper Iggy Azalea rose to prominence in 2013 with her debut single, "Work." Since then she's released the No. 1 hit "Fancy" with Charli XCX and toured internationally promoting her first album, "The New Classic." Her sophomore album, "Digital Distortion," is set to be released later this year. $40 for lawn; $55 for reserved seating (plus fair admission).

Alt-rock mainstays Third Eye Blind first arrived on the music scene 20 years ago. Since forming in 1996 the band his released five albums, including their six-time platinum self-titled LP. Their biggest hits include "Semi-Charmed Life," "Jumper" and "How's It Going to Be." in 2016, the band released the EP "We are Drugs." $35 for lawn; $55 for reserved seating (plus fair admission).

Originally a collaboration between Joe Jonas and former Jonas Brothers drummer Jack Lawless, DNCE is a high energy dance-rock band based in Los Angeles. The group achieved mainstream success with their top 10 single, "Cake By the Ocean." The band recently toured with Selena Gomez and released the track "Kissing Strangers" with Nicki Minaj.  $45 for lawn; $60 for reserved seating (plus fair admission).