Homer’s annual Burning Basket event, not open to public during pandemic, will be streamed online 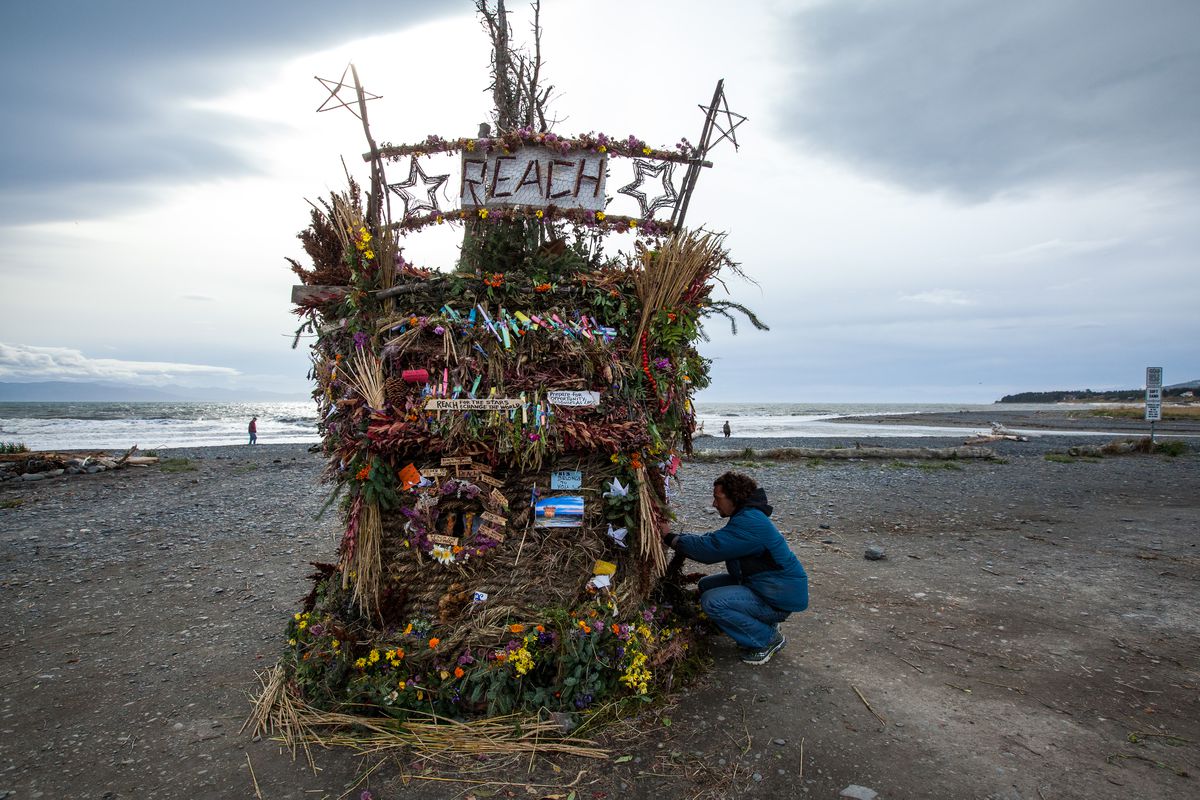 HOMER — In the midst of the COVID-19 pandemic, Homer’s annual Burning Basket will happen this year, but the actual burning will be streamed live and isn’t open to the public.

Coordinator Mavis Muller said she had considered two options: hold the event as usual, but with COVID-19 safe restrictions, or hold a virtual event with a public interactive element.

“We have decided to go ahead with Plan B,” she said Monday. “I still have lots of dots to connect. That’s a reimagining of the whole project.”

Now in its 17th year, Burning Basket has become a community art event and fall tradition. Instigated by Muller, an artist, in past years the project has started with a week of building the basket on site near the Mariner Park beach.

Volunteers helped Muller build a frame and then weaved a large multisided basket using natural materials like alder, bluejoint grass and fireweed. On its last day, the basket was presented to the community for interaction.

Billed as an opportunity for remembrance and unburdening, people were invited to write messages or post photos of lost family and friends. Drummers laid down a beat during the last hours leading up to the burning. At sundown, the basket was lit.

People still will have an opportunity to see the completed basket in person and interact with it by placing objects and written material on it. “Reimagine,” the name of this year’s basket, will be displayed from 11 a.m. to 4 p.m. Saturday and 11 a.m. to 4 p.m. Sunday at Wisdom, Knowledge, Faith and Love Park on Pioneer Avenue. Members of the drumming circle who have played in the past will be there.

“This is the basket that will give us an opportunity to recognize the loss of hundreds of thousands lost to this pandemic,” Muller said.

On Sunday, after the public interaction, “Reimagine” will be moved to a private location for its broadcast ceremonial burning at about 8:30 p.m. Muller plans to include a slide show of past baskets as well as poetry readings and other activities that will start at 7:30 p.m. It can be viewed as a Facebook Live video at facebook.com/BurningBasketProject. It also can be viewed on YouTube by searching for “Homer Burning Basket 2020.”

Even before Muller decided on the virtual event, she had made changes. The basket was to be built in sections at her home and then moved to the Spit. In 2016 and 2015, vandals damaged the basket in progress when it was left in Mariner Park during the building week. In 2015, one vandal destroyed it by yanking it apart with a chain pulled by a truck. Both times, volunteers made last-minute repairs and the burning went on as scheduled.

This year, “Reimagine” was to be a six-sided larger basket to be built in sections and reinstalled at Mariner Park. With the new plan, it’s a smaller, four-sided basket built on a pallet so it can be easily moved. Muller said the challenge of creating the Burning Basket in the pandemic has sparked a new perspective on the annual art project.

Muller noted that 10 years ago the basket was named “Imagine.”

“This year we are reimagining how to let this basket tell a different story — not a lesser story, a more intimate story that involves an in-depth look at the phenomena of this project,” she said. “Imagination is not a finite process. It’s not like you imagine it and that’s how it will be. There is flux and there is change.”