Jimmy Kimmel can surely have fun with a virtual Emmys show, but will TV ever feel like a shared experience again? 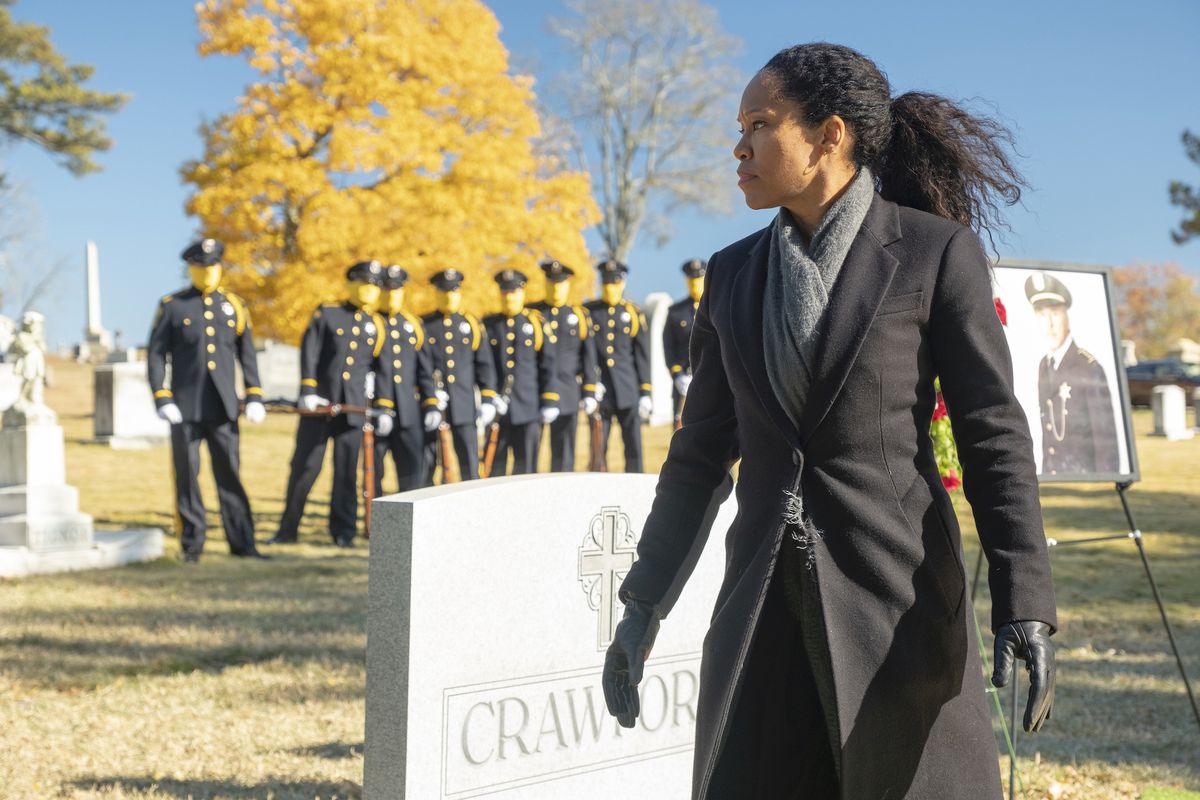 If any show ever deserved the sort of rapt attention and ratings that big, Emmy-nominated TV shows used to get, it would be HBO's limited series "Watchmen," starring Regina King. (Mark Hill/HBO)

If any show ever deserved the sort of rapt attention and ratings that big, Emmy-nominated TV shows used to get, it would be HBO's limited series "Watchmen," starring Regina King. (Mark Hill/HBO)

Producers of Sunday night’s Emmy Awards telecast on ABC are doing everything they can to roll with the 2020-ness of it all, instead of working against it. Jimmy Kimmel, exactly the sort of sarcasm specialist who can have more fun with a deflated balloon instead of a fancy bouquet of them, has been promoting the virtual ceremony for weeks now as a positive thing - better than schlepping down a red carpet for yet another awards show. He will be hosting the proceedings, sans audience, from L.A.'s Staples Center.

Along the way, ABC has billed the event to its virtual attendees as “come as you are, but make an effort,” and is reportedly dispatching more than 100 camera crews to be with nominees, promising to help them look far better than they would with a spotty internet connection. As viewers have seen recently, TV has worked hard during the coronavirus crisis to make live events seem vibrant - and in some cases better and more efficient - without convening an audience. Sports are doing all right with the canned sounds of roaring crowds; the Democratic National Convention in August was far more compelling as a remotely orchestrated symphony of voices. If anything, the Emmys will be more interesting to watch this year, if only to see how Kimmel and company handle it.

So let’s not worry too much about that.

What will seem evident this year - and what a virtual ceremony only amplifies - is that the 2019-2020 season felt like one more giant leap away from the old notion that TV is a communal experience.

This year’s awards will go to a smattering of excellent programs and performers whose work has never seemed more niche, in programs that are more likely to still be on that list of shows you mean to watch, but haven’t. “Mrs. America,” “The Good Place,” “Unbelievable,” “The Mandalorian,” “Succession,” “Insecure,” “What We Do in the Shadows” - they are all present in at least one major Emmy category, but have you seen them all? Have you seen half of them? What about “Normal People,” “The Marvelous Mrs. Maisel,” “The Morning Show,” “I Know This Much Is True,” the latest seasons of “Killing Eve,” “The Kominsky Method,” “Ozark” and “GLOW”? Or the “Breaking Bad” movie, “El Camino”?

I’m a TV critic and I’ll confess that there’s one or two in that assortment that I still haven’t gotten around to finishing - or watching at all. The prime-time Emmys have always had lots of categories with lots of nominees, but it used to be possible for TV viewers to be more or less expert in knowing the field. That was before the current deluge made it impossible for the American audience to have a common conversation about what’s on.

When HBO’s “Game of Thrones” took its final and widely disappointing bow last year (and won the last of its Emmys, including for best drama series), it felt as if we were saying goodbye to the last of the water-cooler shows, the end of TV’s shared references, the category-killing series that comes along and seems to hold everyone in its grip.

Of course I’m aware (all too aware) that not everyone watched “Game of Thrones” - they had their reasons and were inclined to voice them, ranging from distaste of the violent content to simple issues of access (HBO is a luxury item). But keep in mind that resistant naysayers are also key to any cultural phenomenon; by letting everyone know they’re not into it, they actually become part of the hype around it. About 19.3 million viewers watched the “Game of Thrones” finale, and more than 13 million of them did so using a plain ol' TV subscription to HBO, in real broadcast time.

That’s nothing compared to, say, the Nielsen ratings for the 1983 series finale of CBS’s “M*A*S*H,” which an astonishing 106 million viewers tuned in to watch, or 1998′s “Seinfeld” send-off, seen by 76.3 million viewers.

Back then, the prime-time Emmy Awards used to reliably draw more than 20 million viewers - sometimes many more, as in 1986 on NBC, when about 35 million people watched the telecast, which was co-hosted by David Letterman and “Cheers” actress Shelley Long. In 2019, the hostless Emmy telecast on Fox (the networks rotate the duty each year) slipped precariously below 10 million viewers for the first time, drawing only 6.9 million.

If any show ever deserved the sort of rapt attention and ratings that big, Emmy-nominated TV shows used to get, it would be HBO’s limited series “Watchmen,” Damon Lindelof’s provocative and utterly relevant twist on a cult-classic graphic novel about superhuman shortcomings. So much about “Watchmen” seemed to presage the feeling of 2020, with the George Floyd protests against racist policing, everyone covering the lower half of their faces with masks, and a sense that social conflict was being engineered and fomented by players seen and unseen.

Even the bright yellow letters painted on the street in Washington, D.C.'s newly re-christened Black Lives Matter Plaza on 16th Street Northwest echoed the look of “Watchmen’s” bold typography. It’s the rare show that transcends its own ambitions, its influence seeping into a cultural movement. The show has received widespread praise; in addition to 26 Emmy nominations (including technical categories), it just won top honors from the Television Critics Association (of which I am a member), which named it as the outstanding miniseries, outstanding new program and program of the year in its annual awards announced Sept. 14.

Yet these accolades must be tempered with the numbers. “Watchmen’s” stirring conclusion last December garnered only 935,000 viewers the night it aired and about 1.6 million viewers across HBO platforms. More viewers have discovered it since, but these ratings tell a familiar story about this golden era of television: We’re no longer watching the same shows - and we’ve lost our ability to persuade others to watch what we’re watching.

Since the coronavirus pandemic swept the country, I have been working overtime to recommend shows worth watching, either by writing about them or answering emails from readers who ask me to help them find that elusive “next show” that will hit all the right buttons. Getting these folks to try something in a less comforting genre is difficult, often because they have perfected the act of feeling a certain way when they watch TV.

Many viewers are on a continual hunt for shows that won’t depress them or add to their anxiety, because we have enough of that right now, thanks. Others take the privileged position of shunning any show that challenges their perceptions about race or gender - a blanket refusal of “no politics!” Many, many people are looking for more of the snarky-yet-gently optimistic comedies in the “Parks and Recreation”/"30 Rock"/"The Office"/"Schitt’s Creek" mode (they’ve also run through all the episodes of “Community,” “Brooklyn Nine-Nine,” “Superstore,” “Unbreakable Kimmy Schmidt” and “New Girl”), yet for some reason won’t take my suggestion of the “The Good Place,” which will be vying for best comedy series at Sunday’s Emmys.

As with books and music before it, television no longer has the ability or need to generate the broadest possible crowd-pleaser. Watching TV has become deeply tied to one’s sense of self - nowhere is this more clear than on a scroll-stroll through your social network, where an acquaintance will post a query to all her followers, asking for TV recommendations.

What she gets back is a startling range of emphatic praise for shows that ... well, as a critic, I sometimes cringe at what some people hold up as great TV. And yet, as an American living through a global health crisis requiring us all to stay away from other people and stay sane while doing so, I find myself more sympathetic to viewers' personal habits. It has never been more important to watch the thing that entertains you, whether the critics like it or not, and whether it’s up for an Emmy or not.

This, then, is Kimmel’s real challenge on Sunday night: to give his audience the sense, if only for a few hours, that something about television still feels like something we all share.

Hank Stuever has been The Washington Post’s TV critic since 2009. He joined the paper in 1999 as a reporter for the Style section, where he covered popular culture.