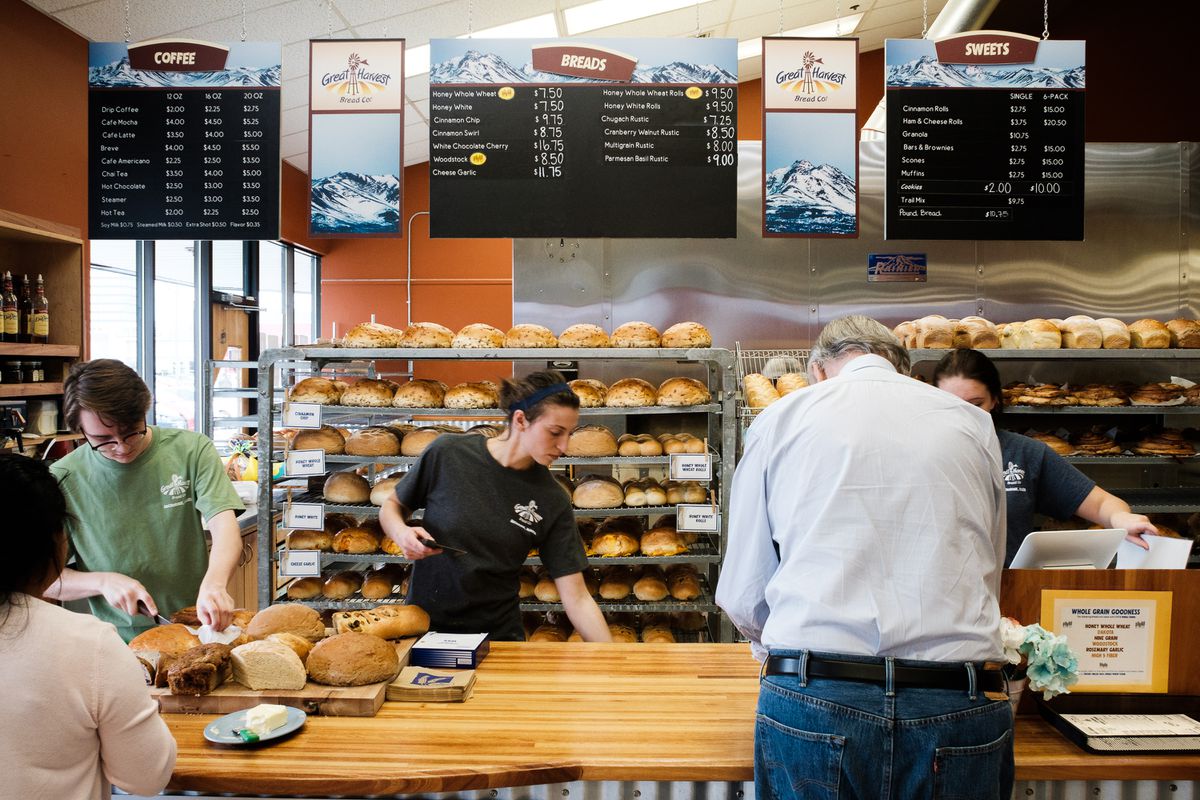 The Great Harvest Bread Co. on Benson Boulevard in Anchorage looks like a homegrown Alaska restaurant. Local blueberry jam is on prominent display. Images of snow-capped peaks accent the store. Menu items include a sourdough loaf called "Chugach Rustic" and a sandwich called "Chicken Alaska," named for Chicken, Alaska, in the Interior.

You could be excused for not knowing Great Harvest is a chain based in Montana. That's because its franchisees are encouraged to buck the typical chain model of homogenization. The company dictates what wheat they buy and what typeface appears on their signs, but franchisees have plenty of say over their menus, recipes and decor, said Anchorage owner Dirk Sisson. There are no uniforms required. He and his wife, Barbara Hood, have put their own family in marketing materials with no objections from the corporate office.

"My wife and I wanted a local flavor where people felt like they're not really in a franchise," said Sisson, who opened the Midtown bakery with Hood in 1994. "We operate pretty independent of the franchise office."

Great Harvest has a history of localizing its stores. As competition among restaurants in Alaska has grown and consumers increasingly seek regional offerings, more chains are likewise adding local touches to what has typically been an Anywhere, USA, business model.

In Alaska, that means a Denali Mac at McDonald's, a reindeer omelet at Denny's and smoked Alaska salmon at TGI Fridays. Decor might include photos of moose, sled dogs and Alaska wildflowers. The Alaskan Brewing Co. sign is a popular piece of flair, even at chain restaurants where the beer isn't sold.

Bruce Burnett, who owns TGI Fridays in Anchorage, has seen the market shift enough over the years, with more rivals opening, that a few years back he spent eight months convincing the corporate office in Dallas to allow the addition of a summer-only menu of Alaska salmon, halibut and reindeer sausage. They figured that tourists staying in the many hotels surrounding their Midtown restaurant were looking for ingredients emblematic of Alaska cuisine.

"Usually if you do anything that's outside their playbook, the franchiser is going to tell you, 'You can't do this' and you can't get it done," Burnett said. "I did it by talking to corporate officers and said we could do good in the summer with local products."

Burnett, who owns a commercial real estate company, had been watching rival chains pushing Anchorage's rapid restaurant growth. Anchorage restaurant and bar employment grew 58 percent faster than the city's overall employment between 2005 and 2015, according to the state labor department.

"It's a big pie and when you keep slicing it smaller and smaller and smaller, you have to figure out how to get the people you need," Burnett said. "Now we have two Olive Gardens and Texas Roadhouses. Chili's closed and then reopened in the Dimond Center. Now we have Smashburger. It all has an effect, so you've got to do something."

Alaska's recession has also elevated the concept of buying local to keep money circulating in the state's economy longer. It might be easy to dismiss a chain restaurant as an outside corporate interest drawing all its customers' money out of state, but that's not usually the case.

Franchisees are obligated to pay a percentage of their revenues to the national office in exchange for use of the brand name and access to administrative services, suppliers and other support. But they also live, work and spend in the state.

"We're the local owners, not the corporate owners out of Colorado," said Smashburger owner Mark Larson. "They get a piece of our pie, but are very supportive of, and actually encourage, personalization, and believe it's important to be a part of your community."

Larry Campana, a restaurant marketer and operator based in Connecticut who has worked in chains across the country, said local customization makes patrons feel they're getting attention and that the restaurant belongs in the community.

"Some people don't want to feel like they're eating at a chain restaurant," Campana said. "The more 'un-chainy' you can get, the better, so that it feels like part of the place and not like some big corporation coming in."

Adding a menu item here and a piece of local art there may seem simple — but often it's not. There is tension between giving franchisees the latitude to adapt to local tastes and the need to maintain a credible, recognizable brand. For chains, consistency sells.

"If I'm going to an Alaska location and they have a dish I love and then I go someplace else and they don't have it, I'm disappointed," said Mark Siebert, chief executive of restaurant consultancy iFranchise Group in Homewood, Illinois. "The franchisee usually has an argument to be made: 'I'm doing this differently because my local customers want it.' But it's not consistent with the brand's image."

And, Campana said, the addition of new ingredients found only in certain regions can increase supply chain costs, or suppliers might not meet corporate standards. That is why plenty of chains, including Domino's, Starbucks and Olive Garden, have stayed true to the brand.

The franchise model may be constraining, but for neophytes, it eases entry into the restaurant business. Manuals, training, suppliers and administrative services are all in place. In many cases, corporate headquarters provide built-in networking and moral support.

"When you're brand new, they visit you quite often. They have an annual convention where you meet with all the other owners and have an internal website where you can commiserate with other bakery owners," said Sisson of Great Harvest. "The main corporate office comes up with marketing ideas and we can send in our recipes for a nutritional analysis, then put it on our labels."

And there's a reason chains receive ecstatic welcomes in Alaska. (See: Olive Garden, Smashburger and Krispy Kreme Doughnuts.) They are known, proven brands with a ready base of customers, many of whom have moved here from cities chock full of the latest chain concepts.

Name recognition also appeals to banks, which tend to be more open to lending to known entities that can provide financial information from other locations.

"It's quite expensive to open a restaurant, and you don't know how people are going to react," Campana said. "Franchising takes a lot of risk out of opening restaurants. And restaurants are notoriously risky."