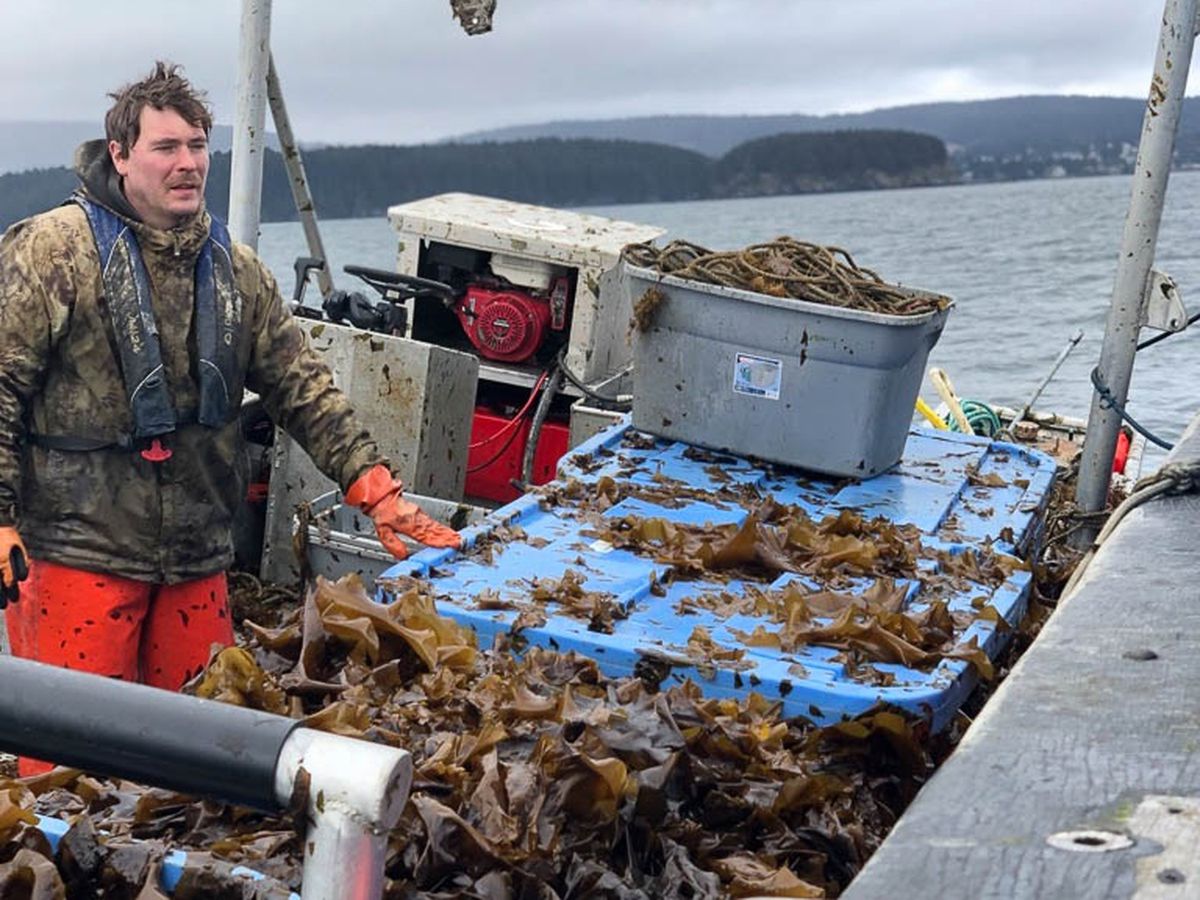 The biggest commercial seaweed harvest in Alaska history is unfolding this week in waters off Kodiak, one slick blade of sugar kelp at a time.

Subsistence seaweed harvests have been happening along Alaska’s coastline for millennia. But Alaska’s commercial seaweed industry is only a few years old, and growing fast.

Just five years ago there were no commercial seaweed farmers operating in Alaska.

The first applications for aquatic farms growing kelp were issued in 2016, said Cynthia Pring-Ham, the aquatic farming coordinator for the Commercial Fisheries Division of the Alaska Department of Fish and Game.

Today, 16 aquatic farming operations are permitted to culture species of seaweed in the state. Ten have permits to grow seaweed in addition to oysters and other shellfish, six to farm only seaweed, according to Pring-Ham.

Lia Heifetz is the co-owner of Barnacle Foods, a Juneau company that produces kelp salsas, pickles and other products.

In the past, her company has used wild harvested bull kelp.

But this year they’ve expanded enough to buy commercially farmed kelp from a growing operation at Hump Island Oyster Company, near Ketchikan.

“(Our business) gave him the confidence to scale his harvest up,” Heifetz said. “No one has a desire to grow kelp and have nowhere to sell it. We’re at a scale now it made sense for him to make the jump and be confident we can buy it."

Barnacle plans to buy about 25,000 pounds of kelp when the harvest is ready.

“It’s a huge milestone,” she said.

Meyers of Kodiak and her husband, Alf Pryor, operate an 18-acre seaweed farm a short skiff ride from the harbor.

They grow two types of seaweed: sugar kelp, marketed in Asia as kombu, which grows in wide, flat bands up to 7 feet long. Ribbon kelp, marketed as wakame, is narrower and features a rib that runs the length of each blade.

They sell their harvest to Blue Evolution, a California-based company that has been on the forefront of the developing industry in Alaska.

Worldwide, seaweed is a $6 billion business, according to the World Aquaculture Society. But most seaweed is harvested in Korea, Japan and China, dried and used for seasoning.

In Maine, seaweed farmers have been producing kelp for food markets for years. But until recently, Alaska had been left out, said Blue Evolution founder Beau Perry.

Starting in 2014, the company worked with researchers at the University of Alaska Southeast to develop techniques for commercially farming kelp -- rather than harvesting wild kelp beds.

The technique involves collecting wild kelp plants and breeding them to produce tiny floating “seeds” that then attach themselves to “grow lines” of string farmers suspend in the ocean in late November, Meyers said.

Seaweed is harvested in late April and early May.

Blue Evolution sells “seed stock” to a handful of Alaska kelp farmers, including Nick Mangini and Alf Pryor on Kodiak, and then buys back the mature kelp.

The kelp is then processed at the Ocean Beauty seafood processing plant and sold as a blanched and frozen product.

So far, the main clientele has been food service at corporations, colleges and other cafeterias.

Alaska kelp can be eaten in a vegan broth at Reed College in Portland, Oregon, and found in the cafeteria of the Bill and Melinda Gates Foundation and Amazon’s corporate catering menus.

It isn’t available in grocery stores yet, but the company plans to sell a small volume of a dried kelp product used for seasoning on its website within a few weeks, he said.

Perry says it tastes like umami, but without a heavy ocean flavor. Perry likes to use kelp in a wild rice bowl, or in a compound butter. Kelp has made its way into microbrews and sourdough bread.

Alaska is poised to become the center of the commercial seaweed industry on the U.S. West Coast, said Perry.

What would it take to grow Alaska’s seaweed industry?

“The development of a market. Right now there isn’t any one buyer who could take all the kelp, at this point,” Meyers said.

It would also take community acceptance. There’s been no voluble pushback to the still-small seaweed farming industry in Kodiak, Meyers said.

“A lot of people don’t understand kelp farming,” she said. “There’s been some concern over people getting bottom leases.”

Meyers believes a growing seaweed industry could be a boon to year-round fishing families that live in Kodiak and other Alaska communities. Seaweed farmers use much of the same gear and skills as setnetters.

And the seaweed harvest cycle takes place exactly when other big fisheries are at a lull, in late fall, winter and spring.

“There’s not a lot of opportunities for folks to gain income over the winter months," she said. “It’s been really nice to see something else creep up.”