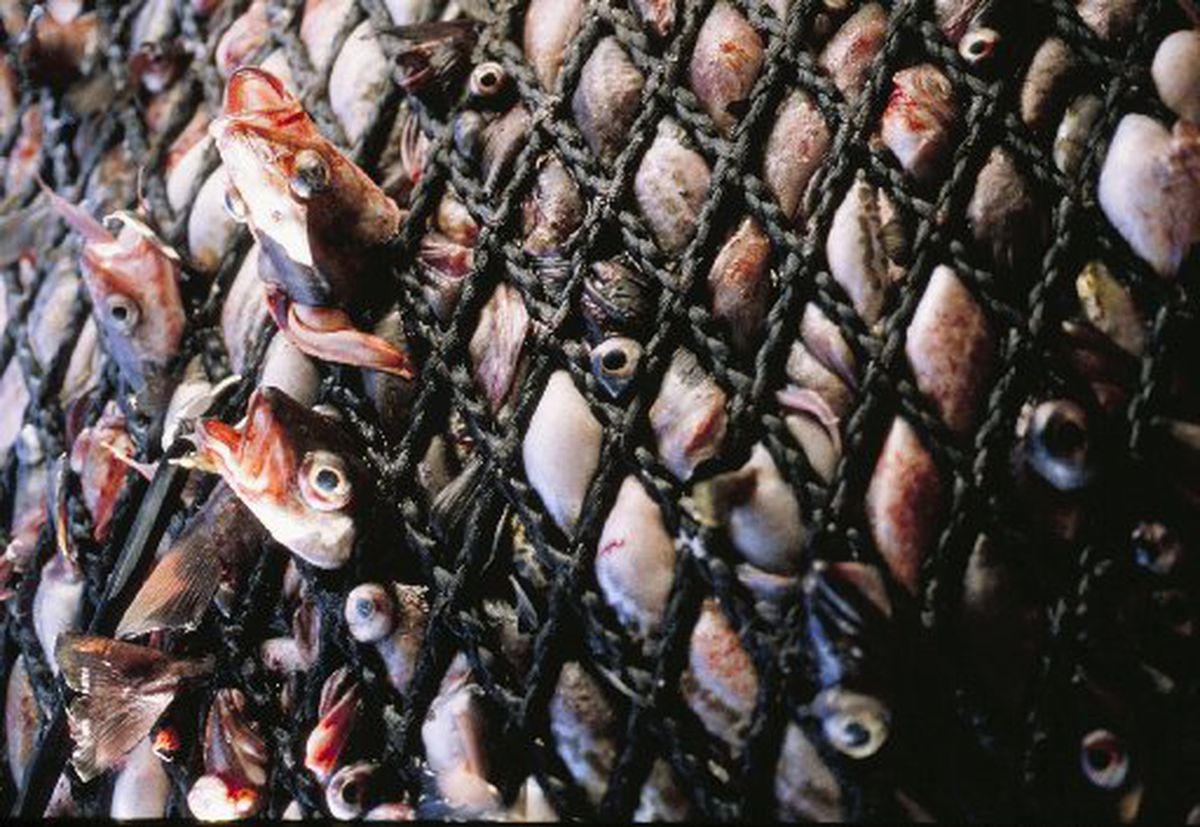 Pollock bulge with the pressure of tons of fish on a factory trawler. (Bob Hallinen / ADN archive)

Pollock bulge with the pressure of tons of fish on a factory trawler. (Bob Hallinen / ADN archive)

SEATTLE — Skipper Kevin Ganley spent most of the summer and fall pulling a massive trawl net through the Bering Sea in a long slow search for pollock, a staple of McDonald’s fish sandwiches. The fish proved very hard to find.

Ganley’s boat is part of a fleet of largely Washington-based trawlers that have had a difficult year as they joined in North America’s largest single-species seafood harvest. Their catch rates in 2020 during the five-month “B” season that ended Nov. 1 were well below long-term averages. They also encountered more skinny, small fish — fit for mince but not prime fillets — than in a typical year, according to a federal review of the season.

Meanwhile, COVID-19 greatly complicated the essential task of keeping crews healthy as one company, Seattle-based American Seafoods, was hit with outbreaks on three vessels. The pandemic also resulted in the cancellation of some research surveys that help scientists measure fish stocks in a body of water that has been undergoing climatic changes as temperatures warm.

This has added an unwelcome element of suspense as crews start their COVID-19 two-week quarantines before the Jan. 20 start of the “A” season.

Though the weather often is rough, these winter harvests typically offer prime fishing as the pollock come together in the southern Bering Sea before spawning. But the disappointing fishing in the last half of 2020 has put Ganley on edge about what he and his four crew members will find when they drop their nets.

“This is the best time of year,” said Ganley, who captains the 123-foot American Beauty. “If they are not there, we’re in trouble.”

During the past decade, the fleet’s average annual haul of pollock has tallied more than 2.88 billion pounds.

The huge fish populations that sustain such harvests result from the remarkable Bering Sea productivity, which has been driven — in part — by seasonal ice that can act as a giant platform for growing lipid-rich algae at the base of the maritime food chain.

In 2018 and 2019, amid a warming trend, there was scant winter ice, and summer Bering Sea temperatures — even on the ocean bottom — soared by as much as 12 degrees Fahrenheit. In those two years, fishery scientists noted all sorts of ecological changes, including pollock and Pacific Cod migrating in much greater numbers to the northern Bering Sea and into Arctic portions of the Chukchi Sea. Biologists and Alaska Native villagers also observed increased die-offs of some sea birds and marine mammals.

In 2020, an initial cooling trend enabled ice to form across a broad swath of the Bering Sea, and by March exceeded long-term averages. But the ice was thin and quickly fell apart amid storms and warmer temperatures. By early April, when longer spring days help spur algae blooms, it was gone from much of the sea.

“That was the time of year when ice should have been near its maximum, and we had this dramatic fall off,” said Rick Thoman, a University of Alaska Fairbanks researcher who tracks the ice formation and movement.

During the rest of 2020, sea temperatures continued to rise. Though the warming was not as intense as in 2018 and 2019, it still was well above long-term averages, and some sea bird die-offs continued, according to a federal ecosystem report.

In a typical year, a series of surveys by federal fishery scientists help assess the algae bloom, the distribution of commercial fish species and the abundance of copepods — small crustaceans that are a key source of food for young pollock.

But as the pandemic took hold in the spring, the Alaska Fisheries Science Center, headquartered in Seattle, canceled five of six research cruises amid concerns about the potential for COVID-19 outbreaks at sea.

“After much deliberation we determined that there is no way to move forward with a survey plan that effectively minimizes risks to staff, crew, and the communities associated with the survey,” said a statement released in May by the National Oceanic and Atmospheric Administration.

Fishermen, for example, helped in taking bottom temperatures with equipment they brought on board their vessels. And scientists figured out a way to roughly measure the pollock abundance through acoustic sonar mounted in three Saildrones, which are remote-controlled 20-foot boats.

They were developed by Alameda, California-based Saildrone, and are powered by a mix of wind, solar and hydro power from turbines turned by the motion in the sea. The crewless vessels left California in mid-May and traveled 2,200 nautical miles to the Bering Sea, where they spent much of July and August conducting the pollock survey.

Alex De Robertis, a NOAA Fisheries scientist, said the Saildrones had previously been used for survey work in the Arctic, and he was able to quickly develop the survey plan for pollock when the pandemic took hold. He comes up with the survey instructions for the Saildrones, and then the development company directs their movement.

Ganley said he twice spotted the craft — bright orange in color and with distinctive fins — as they crisscrossed the fishing grounds. Initially, he thought they might be piloted by some adventuresome sailors until he drew close.

“I think it’s brilliant,” Ganley declared. “That’s our hope, scientists like that.”

The Saildrones’ data made a significant contribution to the annual federal assessment of pollock stocks that helps determine the harvest level for the upcoming year.

But the Saildrones did not have any trawl nets. So they could not replicate another part of survey work that involves netting fish and assessing their size, weight and age.

That information gap means there is more uncertainty about what’s happening to the pollock stocks and why many fishermen struggled to find older, bigger pollock during the summer and fall harvest. Some of these fish may have moved farther north in a continuation of trends of recent warm-water years. But a planned trawl survey of the U.S. portion of the northern Bering Sea was canceled.

Fishermen’s experiences of the past year also pointed to other ecological changes, perhaps resulting from the warming trend that has benefited some species that have moved into traditional pollock harvest zones.

Ganley said he noticed far fewer humpbacks and other whales in the area where he searched for the scarce large pollock.

And sablefish, also known as black cod, turned up in the nets of pollock fishermen in much greater quantities. The final fleet tally of these fish — prized for their rich, oily fillets — was 3,459 metric tons, which was more than 34 times the quantity caught just three years earlier. This was a problem because the tonnage far exceeded the pollock fleet’s allocation. Therefore, much of it — under federal rules — had to be discarded.

“It’s tough. There were a lot of small ones that we were catching, and you had to pick them out of the nets and throw them overboard,” Ganley said.

The pollock fleet’s dramatically higher take of sablefish enraged other fishermen who make a big part of their livelihoods from catching black cod with longlines set along the bottom with baited hooks.

“This is unacceptable by any standards and threatens the health of the sablefish resource throughout Alaska,” wrote Raymond Douville, an Alaska longliner, in testimony submitted in December to the North Pacific Fishery Management Council. “The trawl fleet is being allowed to trash one resource in order to profit for themselves.”

The pollock fleet started 2020 in a kind of splendid isolation as they worked the winter Bering Sea harvests with crews who left their shoreside homes before the COVID-19 pandemic had gained much momentum outside of China. But the risks of the novel coronavirus were demonstrated in May when an American Seafoods factory trawler, fishing for hake off the Washington coast, had one crew member report feeling sick. Subsequent testing then indicated 85 out of 126 crew were infected with the virus.

In the months that followed, the owners of most pollock boats — both the larger factory ships and smaller catcher boats — were able to prevent coronavirus infections from coming aboard their vessels.

That was accomplished with 14-day quarantines, which became the standard for all crews.

American Seafood vessels initially had opted for quarantines of as few as five days, but after the spring outbreaks switched to the 14-day quarantines. But the company continued to have problems in the summer fishing season in the Bering Sea when 85 of 119 crew members tested positive for the coronavirus during a stopover in the Unalaska port in the Aleutian Islands.

That vessel then had to temporarily stop fishing and docked in Seward, Alaska, where infected crew members disembarked.

The coronavirus also created new tensions in the fleet’s relationship with shoreside communities that are ports-of-call. Alaska public health officials were concerned about the potential for infected crew members to spread the virus in remote areas with few health facilities. Meanwhile, boat operators were wary that their crew might pick up the virus onshore and bring it to sea.

This made port stops, once an opportunity for crews to savor a rare restaurant meal, far more austere. Ganley required his crew to stay aboard the vessel through most of the 2020 fishing season. He is hopeful that sometime this winter his crew can get vaccine shots. Until then, he plans to repeat the prohibition on shore leaves.