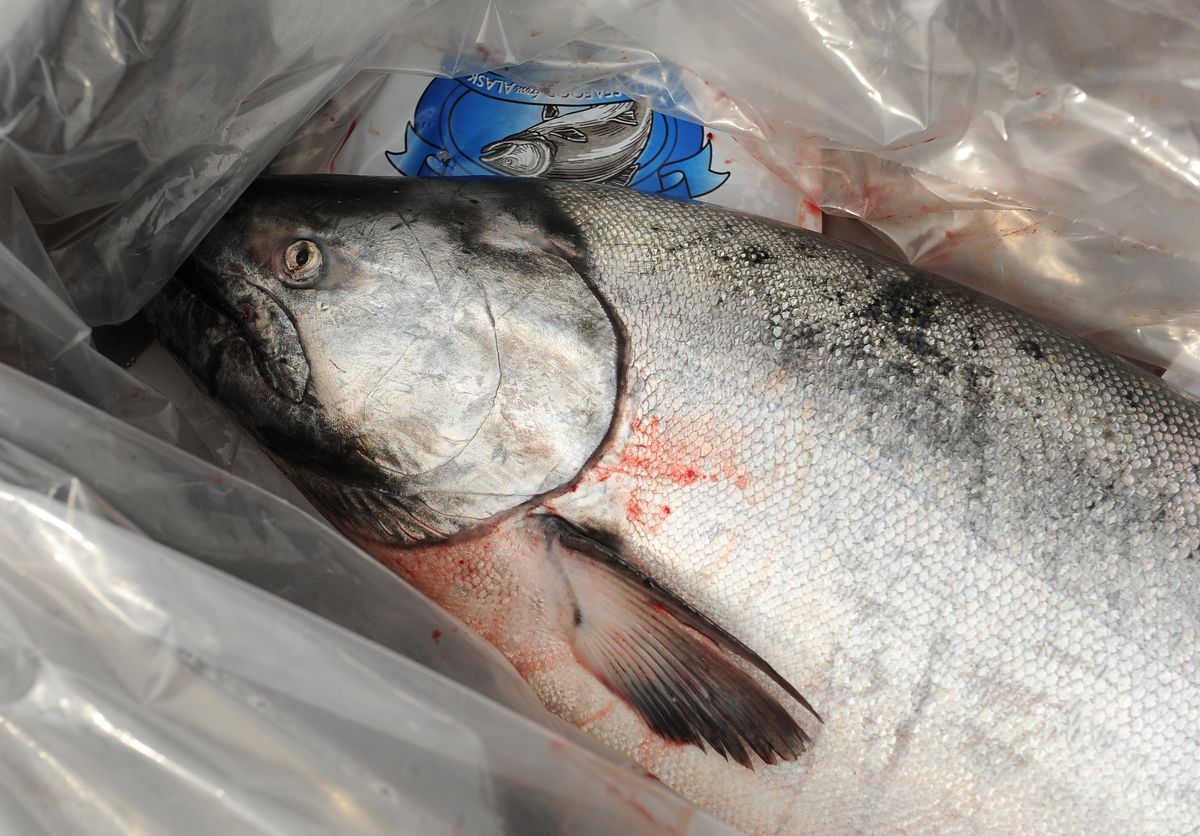 A 45-pound Copper River king salmon is displayed as the first salmon of the year arrived in Anchorage on May 19, 2017. (Bob Hallinen / ADN)

A 45-pound Copper River king salmon is displayed as the first salmon of the year arrived in Anchorage on May 19, 2017. (Bob Hallinen / ADN)

Alaska’s 2021 salmon season officially starts on Monday, May 17, with a 12-hour opener for reds and kings at the Copper River.

All eyes will be on early Cordova dock prices for Alaska’s famous “first fresh salmon of the season” as an indicator of wild salmon markets. COVID-forced closures in 2020 of high end restaurants and seafood outlets tanked starting prices to $3 per pound for sockeyes and $6.50 for king salmon, down from $10 and $14, respectively the previous year.

But early signs are looking good.

National Retail Federation President Matthew Shay said there is a lot more consumer optimism this year as more people are getting vaccinated and stimulus checks are being distributed, and friends and family are moving about more freely.

Elsewhere on the fishing grounds - Alaska’s biggest herring fishery at Togiak kicked off on May 3 with two buyers and about a dozen boats on the grounds. They have a roughly 85 million pound quota, the largest since 1993.

Herring fishing continued around Kodiak for a nearly 16 million pound catch, the largest ever.

Sitka’s roe herring fishery this spring produced less than half of its 67 million pound quota, taken by 18 of 47 permit holders.

Kodiak’s Dungeness fishery opened on May 1 and so far, a fleet of about 15 boats is dropping pots around Kodiak, Chignik and the Alaska Peninsula. Last year’s dungie catch of nearly 3 million pounds was the region’s best in three decades.

Bering Sea crabbers are pulling up the last of their 40.5 million-pound snow crab quota. Crabbers also are wrapping up the season’s Tanner crab and golden king crab fisheries.

Black cod (sablefish) catches have topped 7 million pounds, with most going to Sitka, Seward and Kodiak. That fishing limit this year is 40.5 million pounds.

And as always, fishing continues throughout the Gulf of Alaska and Bering Sea for a huge mix of Alaska pollock, cod, flounder and more.

COVID commfish impacts - A drop in dock prices stemming from the COVID pandemic was the biggest hit to Alaska fishermen over the past year, followed by planning and logistics disruptions.

Those are just a few takeaways from a presentation compiled by McKinley Research Group economist Dan Lesh for the Alaska Seafood Marketing Institute at its May Board of Directors meeting.

Other lowlights: Dockside values were down across the board due to a mix of biological factors and COVID disruptions. That decreased the value of Alaska’s 2020 seafood catch by roughly 20-25% to an estimated $1.5 billion, and down 16% in export value and volume from 2019.

Disaster declarations were posted for eight Alaska salmon fisheries in 2020, one of the worst years since 1970s.

Alaska’s seafood industry reflected a 21% decline for crew licenses from 2019, and a 31% decline in peak employment for processing workers.

For Alaska processors, costs above and beyond those normally incurred added up to $70 million, and they expect to pay more than $100 million this year due mostly to travel and quarantine expenses. Processors also saw a 50% decrease in workforce changes along with “reduced employee morale.”

COVID impacts are expected to be even more challenging this year, due to trade disputes, climate change impacts and increased competition, including from plant-based foods.

The Alaska Dept. of Revenue spring forecast estimates that fisheries business and landing taxes for FY2021 will total $47.8 million, a 19% decrease from last year’s $58.8 million.

Meanwhile, increased seafood demand and a 36% growth in direct-to-consumer sales to $90 billion is called “exciting” and the Alaska brand remains strong and “increasingly relevant.”

Big seafood surge - A who’s-who of over 60 U.S. fishing companies, organizations, medical professionals and more sent a letter to Congress last week asking for support for a country-wide seafood marketing and public education campaign. The goal is to highlight the immense health benefits of eating fish and shellfish – a message backed by Americans who have sent seafood sales soaring during the COVID pandemic.

The group plans to resurrect a national seafood council, a move recommended by NOAA’s Marine Fisheries Advisory Council last July. A seafood council was created in 1987 as part of a Fish and Seafood Promotion Act but fizzled after five years.

The mission is simple – get Americans to eat more seafood.

The push gets some extra clout from new U.S. dietary guidelines that advise Americans to eat two seafood servings per week, starting with kids at six months.

“Maybe we should have a contest to find a nice tag line that would identify seafood in the same way as Got Milk? Or Beef, It’s what for dinner, or the Incredible Edible egg,” said Dr. Tom Brenna, professor of pediatrics and nutrition at Dell Medical School at the University of Texas, pointing to other major U.S. food producers who back their industries to promote their products.

This week’s industry letter to Congress requests $25 million in seed money to revive a more modernized council that would eventually become industry funded.

A task force led by the Seafood Nutrition Partnership has formed to lay a foundation for the council. It will be “the most all-encompassing, consumer-facing seafood marketing campaign in our nation’s history,” SNP said in a press release.

Brenna is encouraged by the seafood push.

“Apparently, we have not done the kind of job that we should have in educating consumers in what they ought to be demanding for themselves and their kids,” he said in a phone interview. “We have a major effect here with seafood that we should be heralding from the rooftops.”