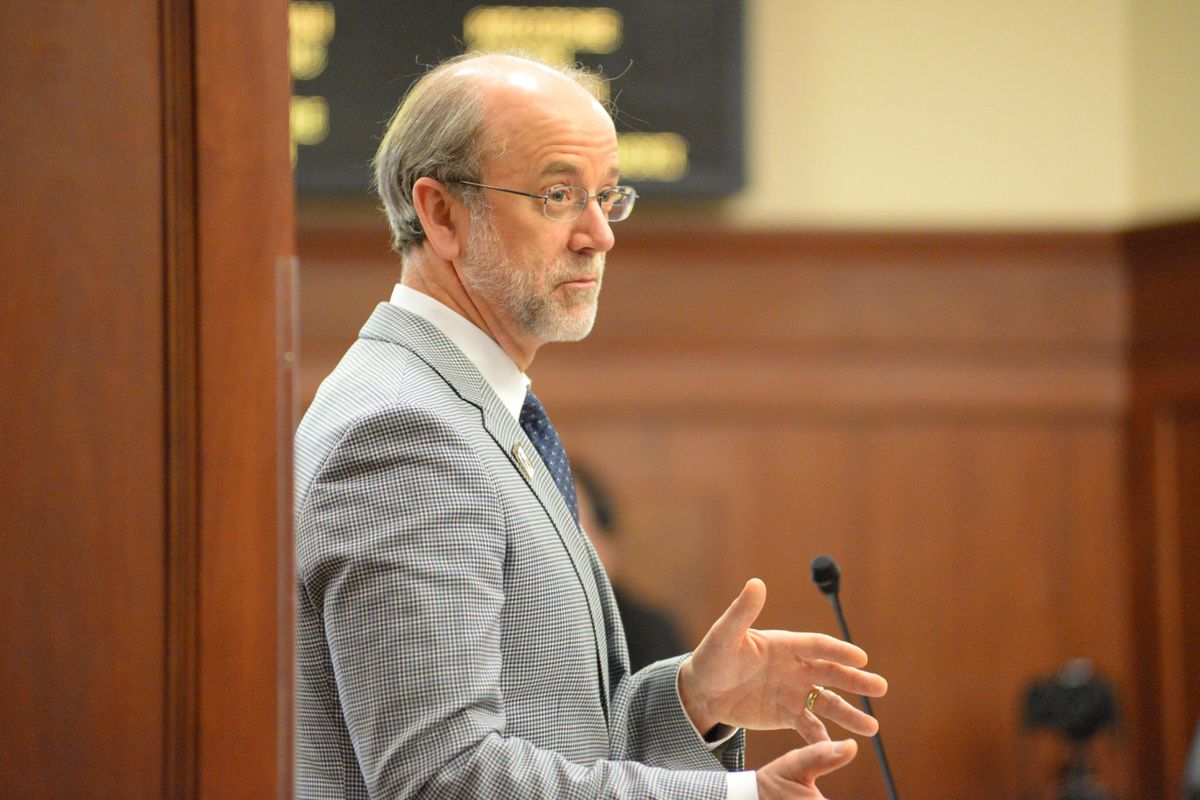 Gov. Mike Dunleavy this week put the chairman of Alaska’s oil and gas oversight body on administrative leave with pay, after a hearing officer rejected some complaints against Hollis French but said it’s up to Dunleavy to determine if the former state senator should be removed over a potential “security breach” involving a top-secret well.

Tim Petumenos, a private attorney who oversaw a three-day hearing against French last week, also found that French was chronically absent from the office, causing a “reallocation of work” to others and affecting office morale, according to Petumenos’ findings released Tuesday.

But Petumenos added that the work of the Alaska Oil and Gas Conservation Commission was not “delayed or affected in any material way." French did a substantial amount of work outside the office and was not given a chance to change his behavior because no one in the office “seriously” informed him of their concerns, Petumenos said.

The hearing, and Petumenos’ 19-page report, was sparked by an unusual Jan. 17 letter from the governor charging French with five missteps, including typically coming to the office just four hours daily. The two-page complaint stemmed from concerns by French’s fellow commissioners, Cathy Foerster and Dan Seamount.

French, an attorney and former Democratic state senator, was appointed by former Gov. Bill Walker in 2016. He earns $145,000 annually.

If Dunleavy finds “cause” to remove French, a step required by state law, he can quickly overhaul the independent, quasi-judiciary body, appointing two of its three commissioners.

Foerster, who documented French’s absences over several months, said she’s leaving the board this month after 14 years. (The current term for Seamount, a commissioner for nearly two decades, ends in 2023.)

French on Wednesday told a reporter he finished commission-related tasks he needed to complete, and did so quickly. French said he spent limited time at the commission’s Anchorage offices — choosing to work elsewhere — because he felt uncomfortable there, like he was being “spied on.”

“It turns out I was right,” he said, referring to Foerster’s tracking of his time.

Foerster and Seamount did not respond to requests for comment on Thursday. Both testified against French during the hearing in Anchorage.

The commission, among other actions, issues drilling permits to oil and gas companies, and enforces rules designed to prevent waste and accidents.

A letter from the governor to French on Wednesday said he was “immediately” being placed on administrative leave and must hand over his key card. Dunleavy is considering details of the case and French’s “continued employment," the letter said.

In the hearing, French said he gave the Anchorage Daily News information for a story in 2017 about security measures surrounding the confidential data, as well as the whereabouts of that data, from the lone well drilled in the Arctic National Wildlife Refuge in the mid-1980s, known as KIC-1 well.

Foerster had also shared that information with the Daily News, but pointed out last week she is not under investigation.

French had argued during the hearing that he did not reveal details of the data itself, and therefore met the requirements of a 1992 settlement between the state and oil companies. French said it was not a violation to disclose the data’s location or discuss security around it.

Petumenos, who agreed to serve as hearing officer at Dunleavy’s request, found that it’s up to the governor to determine whether French’s disclosures constitute "a material cause for removal.”

French said Wednesday he did not know why Foerster and Seamount want him removed.

But French said the disagreement started in 2017 when he met with then-Attorney General Jahna Lindemuth, presenting his views that the commission should expand its jurisdiction to further stop waste. The agency had determined it did not have enforcement authority over natural gas leaking from a Hilcorp line that fueled operations at a Cook Inlet platform.

Petumenos found no “substantial evidence” to support “removal for cause” due to those concerns.

Petumenos wrote that the concerns were related to the “good faith” disagreement French had with Foerster and Seamount over the agency’s jurisdiction. French clearly communicated that his view was not the commission’s view, Petumenos said, citing evidence in the case.

There is “insufficient evidence” showing that French was “unprofessional, rude or bullying," Petumenos wrote.

With state law designed to protect the independence of commissioners, there isn’t enough evidence to remove French simply because he “ardently” pursued his “minority” views, Petumenos wrote.

Doing so could set a “dangerous precedent" for such an independent body, he wrote.

“This governor, and future governors, should be free to hear from commissioners, even minority view commissioners, without the fear that the commissioner could be removed for bringing issues to the governor or attorney general’s attention,” Petumenos wrote.

“The entire point (of state law) is to ensure that removal for cause does not come about as a consequence of policy disagreements or points of view, but for elements of misconduct unrelated to the merits of any issue before the AOGCC,” he wrote.