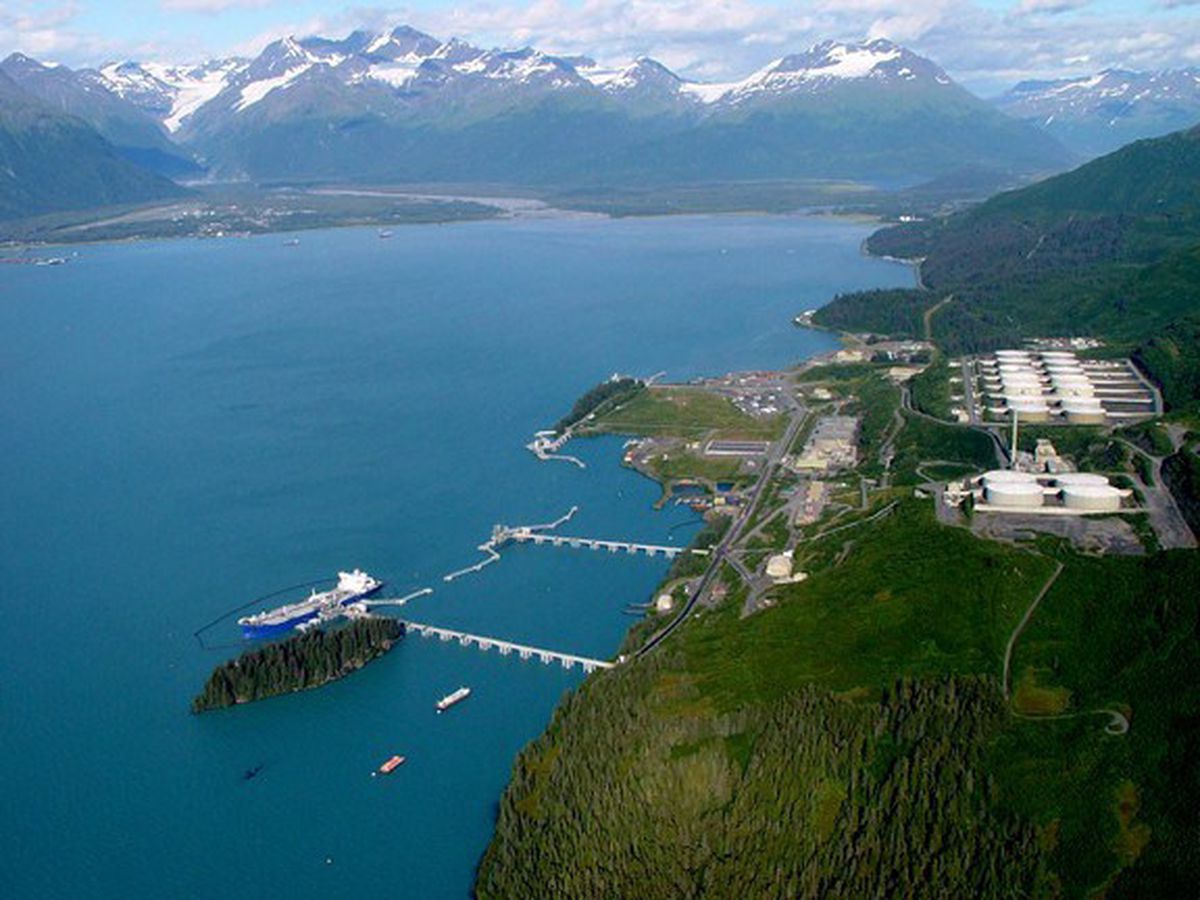 Valdez pipeline terminal. The four tanks in the foreground are the West Tank Farm; those further back are the 14 in East Tank Farm. (Alyeska Pipeline photo. )

Valdez pipeline terminal. The four tanks in the foreground are the West Tank Farm; those further back are the 14 in East Tank Farm. (Alyeska Pipeline photo. )

Federal regulators all but confirmed Nikiski should be the terminus of the proposed $43 billion Alaska LNG Project when they released the draft version of its environmental review June 28, but officials hopeful to see the project in two other areas have very divergent views on that conclusion.

The City of Valdez filed initial comments July 8 with the Federal Energy Regulatory Commission on the Alaska LNG environmental impact statement, or EIS, that note just one page of the roughly 3,800-page document is devoted to analyzing a route to Valdez and it “ignores the substantial advantages” that route would provide the project.

Previous gas line investigations have determined routing a project to Valdez is the least environmentally damaging option, largely because the pipeline would follow the existing Trans-Alaska Pipeline System route, according to city officials.

“Moreover, FERC appears to have taken (Alaska Gasline Development Corp.’s) unsupported assertions regarding the impacts of the Valdez Alternative at face value without conducting the additional research or analysis mandated by (the National Environmental Policy Act),” the comments state.

Alaska Gasline Development Corp. leadership has, through multiple management changes, stuck with Nikiski as the chosen locale for the project’s massive LNG plant.

Nikiski was selected in 2013 when ExxonMobil was leading early work on the project in a consortium with BP, ConocoPhillips and the state.

Former ExxonMobil Alaska LNG Project manager Steve Butt said at the time that the project team studied more than 20 sites across Cook Inlet, Resurrection Bay and Prince William Sound. Nikiski was chosen largely for its flat terrain and the ability to provide natural gas to the state’s four largest population centers along the pipeline route.

The draft EIS largely affirms the conclusions of AGDC and the producers.

The producer companies solidified their project endpoint by subsequently purchasing nearly 700 acres along tidewater in Nikiski to begin preparing for the eventual LNG plant.

Interim AGDC President Joe Dubler said in a statement following the release of the draft EIS that publication of the voluminous document indicates significant progress toward obtaining the key authorization to build the project.

[Alaska Gasline Development Corp. cuts over half of its staff]

The final EIS is expected in March 2020 with a commission decision on the project coming in the following months. The public comment period on the draft EIS closes Oct. 3.

Whether or not the State of Alaska, through AGDC, will follow through and build Alaska LNG if it gets authorization from FERC remains to be seen. Gov. Michael J. Dunleavy has directed the state-owned corporation to drastically slow its marketing and contract efforts related to the project and focus on the regulatory issues, which is a marked reduction in the work AGDC was doing under former Gov. Bill Walker’s administration.

“The ongoing permitting process incorporates more than 150,000 pages of data and should give Alaskans confidence that the project’s merits and impacts are being rigorously scrutinized,” Dubler said.

Valdez officials note that going to Nikiski requires approximately 196 miles of new pipeline right-of-way through currently undeveloped areas as well as a 27-mile subsea crossing of upper Cook Inlet, which is considered critical habitat for the endangered population of Cook Inlet Beluga whales.

The comments note their route would also avoid construction in several state game refuges and possibly the edge of Denali National Park; however, whether or not the 42-inch Alaska LNG pipeline would cut through a small portion of the park or skirt around it is unclear at this point.

AGDC’s current route plan — primarily developed by the producers — is to generally have the gas line follow the TAPS corridor from the North Slope south to about Livengood north of Fairbanks before splitting off and cutting through the Alaska Range along the Parks Highway. The southern portion of the pipeline route would parallel the Susitna River along its west side until reaching the Cook Inlet crossing to Nikiski.

A gas line to Valdez has been studied extensively in the past but AGDC officials contend crossing over Thompson Pass just north of Valdez presents engineering challenges. They also note the different engineering requirements for the oil-carrying TAPS, more than half of which is above ground, and a gas line that would be completely buried.

The comments also contend that the draft EIS “unlawfully includes impacts” from a potential spur pipeline from Glennallen to Palmer, which Valdez officials insist is not a reasonable foreseeable impact of routing to Valdez.

The City of Valdez was granted intervener status on the project, meaning it can request the commission to reconsider its decisions on the Alaska LNG Project and can also appeal FERC actions in federal court.

FERC officials wrote in the draft EIS that AGDC first looked for plant sites with between 800 and 1,200 available acres with waterfront access for development, but reduced the size requirement to at least 400 acres after additional design work was done for the Nikiski site. They evaluated seven LNG plant site alternatives identified by AGDC, according to the EIS.

Anderson Bay is a 464-acre state-owned site adjacent to Valdez and within its city limits that FERC evaluated. The EIS notes that it would not drastically increase the length of the mainline pipe from the 807 miles needed to reach Nikiski and would avoid the construction issues associated with Cook Inlet’s turbid and turbulent waters, but it would require an additional 113 miles of lateral pipelines to reach Anchorage and Fairbanks.

The current plan calls for a roughly 30-mile spur pipeline running east from the main gas line to Fairbanks. It would connect to the Anchorage and Matanuska-Susitna Borough population centers through the existing gas pipeline network in the region.

The Anderson Bay option would impact an additional nearly 1,400 acres of land, much with wetland and forest resources, according to FERC.

“Unlike the proposed mainline pipeline, the Anderson Bay mainline pipeline would also cross two federally designated Wild and Scenic Rivers; however, minor deviations from the TAPS corridor would avoid the areas within the WSR designations,” the EIS states.

FERC officials also largely agreed with AGDC’s assessment of burying the gas line for about five miles through Thompson Pass. It would “likely add significantly to the construction complexity, lengthen the construction schedule and increase environmental impacts,” they wrote.

Laden LNG tankers traversing narrows near Valdez and the Hinchinbrook Entrance to Prince William Sound would also cause vessel traffic problems, according to FERC, as those tankers would need a very large safety zone established around them to travel safely.

A 968-acre Robe Lake site near Valdez would require moving the Richardson Highway and several residential developments, according to the EIS, along with adding between 4 million and 13 million cubic yards of fill to get the plant above potential tsunami wave heights.

The current plan calls for re-routing the Kenai Spur Highway through Nikiski to avoid the LNG plant site, which would require 3.4 miles of new highway, according to AGDC.

A Robe Lake LNG plant would also require the loading dock to extend about a mile and need additional dredging to reach the 60-foot water depths large LNG tankers demand. It would also have the same vessel traffic constraints as Anderson Bay and would mean displacing 142 homes instead of the 16 estimated under the Nikiski option, according to FERC.

Valdez officials said through their comments to FERC that they will file additional comments further detailing the failures in the draft EIS.

“Alaskans deserve a robust comparative analysis of the Nikiski Alternative and the Valdez Alternative to allow a reasoned decision between them and ensure that both environmental impacts and project costs are minimized,” the comments state.

After expressing their displeasure for years over allegedly having their favored LNG plant site unfairly dismissed by AGDC and the producers, Mat-Su Borough officials seem to be satisfied with FERC’s analysis.

Mat-Su Borough Manager John Moosey said in a brief interview that borough staff are still reading through the EIS, but he believes it shows the Port MacKenzie site “in a fair and more accurate light, and that’s really what we wanted.”

He noted that borough officials simply wanted the federal record to accurately reflect Port MacKenzie — across Knik Arm from Anchorage — whether for the Alaska LNG Project or other potential developments.

“If the State of Alaska believes Nikiski is the best place and the project can happen we’re all in favor of that,” Moosey added. “I just think a lot of extra energy got wasted over five years of being ignored and not providing factual information.”

They contended over the past several years that ExxonMobil’s initial review of potential LNG plant sites didn’t even consider the correct site. The site evaluated and dismissed by the Alaska LNG consortium is private land about three miles north of Port MacKenzie.

It has extensive tide flats that would require a 1.6-mile trestle or a massive dredging operation to access water that is continuously 50 feet deep, which is necessary for the large LNG tankers that would berth at the dock.

The EIS states that borough officials asked FERC to analyze a liquefaction site about 2 miles from tidewater that turned out to consist mostly of wetlands. AGDC also said the distance from tidewater would add design and operational challenges. Therefore, FERC did not evaluate it in detail.

AGDC officials have said that while ending the pipeline at Port MacKenzie would cut 60 miles off the pipeline it would require demolishing the existing dock and construction of a larger one, which the EIS notes would mean additional dredging during construction.

According to the EIS, the shipping channel across Knik Shoal would also have to be dredged to the tune of 700,000 cubic yards per year for the life of the project based on AGDC’s projections.

Additional considerations for Port MacKenzie being in some of the most critical Beluga habitat and more challenging winter ice conditions in the upper reaches of Cook Inlet, among others, led FERC to conclude Port MacKenzie would not be a significant improvement over Nikiski.

“FERC did what they’re supposed to do and I thought they did a fine job,” Moosey said.