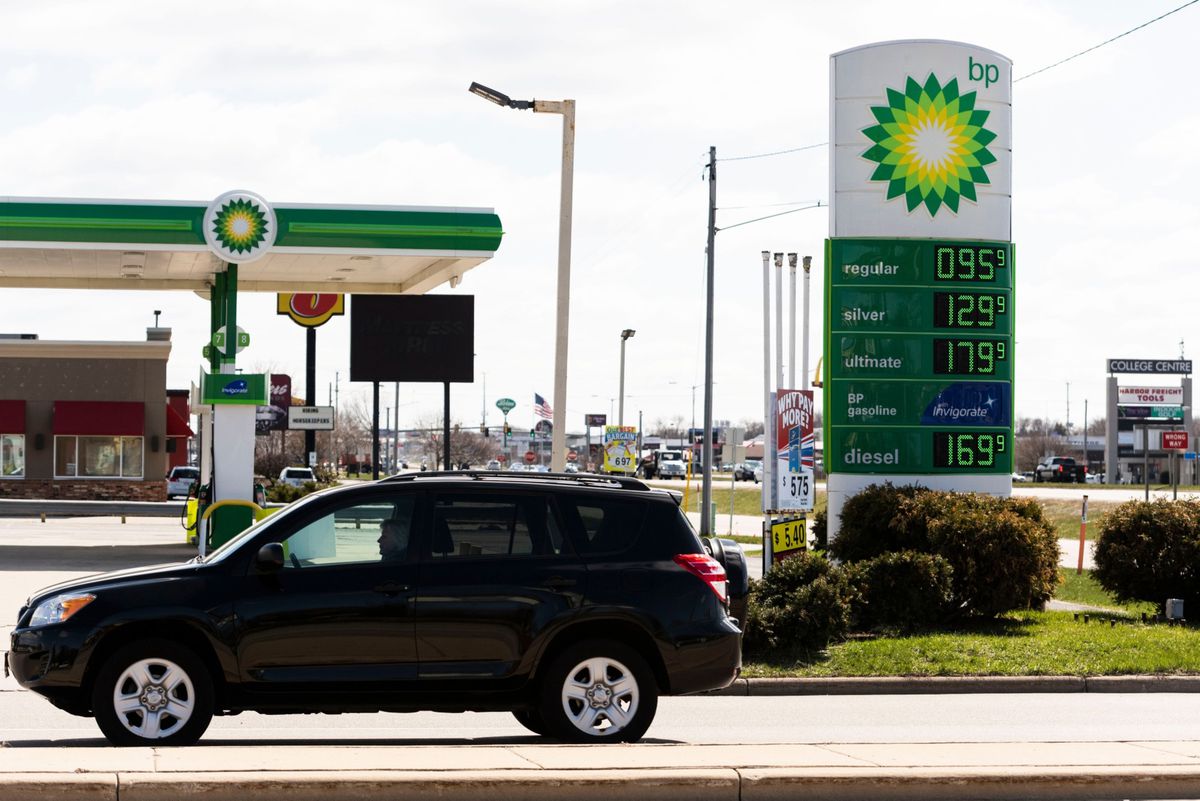 Fuel prices are displayed on a sign outside a BP gas station in Appleton, Wis., on April 20, 2020. International oil majors like BP and Chevron have eliminated thousands of jobs. MUST CREDIT: Bloomberg photo by Lauren Justice

Fuel prices are displayed on a sign outside a BP gas station in Appleton, Wis., on April 20, 2020. International oil majors like BP and Chevron have eliminated thousands of jobs. MUST CREDIT: Bloomberg photo by Lauren Justice

Every so often, corporations confront questions of life or death.

IBM did it in the 1990s, when its hulking mainframe computers faced the challenge of next generation PCs. A new chief executive successfully shifted IBM to services and software. Netflix did it — three times. It first played the role of disruptor, offering movie DVDs by mail and then mastering the business of online streaming. Then it changed again, generating its own content.

Now, BP, one of the world’s largest oil and gas companies, is aiming to ride the waves of disruption instead of being crushed under them.

Led by a new chief executive, BP is trying to reinvent itself as an energy company in the age of climate change. The company is shrinking its oil and gas business, revving up offshore wind power and developing solar and battery storage. It is even considering installing electric car charging kiosks at its gas stations, part of a drive to eliminate or offset its carbon emissions to a net zero level by 2050.

There is much at stake because the century-and-a-half-old oil and natural gas business — unlike the business of home entertainment — has the ability to inflict even more lasting damage to the planet’s climate if it fails to act and continues to generate greenhouse gases.

But BP is not just doing this out of altruism; it is making a business wager that low carbon energy will be a huge part of the world’s future.

“The challenge as I see it is that it is almost impossible for incumbent companies to change their business models,” Bruce Usher, a professor at Columbia University’s business school who uses Netflix as a case study in his classes. Netflix is one of the very few cases of a firm “radically changing its business model and going on to even greater success,” he said.

“I can’t think of a company like that in the energy business,” Usher said.

BP is giving it a try. On Sept. 10, the London-based oil giant said it would spend $1.1 billion for a half ownership in Equinor’s wind projects off the shores of Massachusetts and New York, with the hope that the partnership will build more offshore wind projects in a global market expected to grow from 30 gigawatts today to more than 200 gigawatts by the end of the decade.

BP is adding this to a portfolio that includes a 50 percent ownership stake in European solar company Lightsource BP, which is developing projects.

It’s just a start. The oil and gas company’s chief executive Bernard Looney, a drilling and production engineer, said on Aug. 4 that it aims to boost spending on low carbon projects from $500 million a year currently to $5 billion a year by the end of the decade. Even that larger figure, however, would be barely 40 percent of BP’s overall capital spending budget.

The company has also said it would consider installing electric vehicle recharging stations at many of the more than 7,000 retail gasoline stations in the United States. The company has already purchased Britain’s largest electric vehicle charging network and another network in China. And it plans to help cities and utilities buy packages of renewable energy and storage.

The need for a far-reaching corporate makeover as the planet warms is pressing, the company said. “There’s a fundamental belief about our business proposition: that the world actually demands more affordable clean energy,” said Dev Sanyal, chief executive of BP’s alternative energy business and a member of the company’s executive leadership team. “Providing the energy the world needs the way that it wants it — that is a shift in our strategy.”

The new strategy might be good for the world, but tough on the company in the short run.

Sanyal said that BP expects dividends in the range of 8 to 10 percent — a solid, stable performance but perhaps falling short of the oil industry’s traditional returns on investment. BP recently cut its dividend and Royal Dutch Shell slashed its dividend for the first time since World War II, a blow for shareholders, especially British pension systems that rely heavily on Big Oil’s checks.

“We’re not promising the world. We’re promising 8 to 10%,” Looney said in answering questions from stock analysts on Monday.

“You have to continue to take care of the core business to generate the cash to fund the transition and keep the investors on board as you slowly shift away from higher-margin projects to lower-margin energy projects,” said a mid-level executive who was not authorized to speak for the company. “I don’t envy the job of a CEO of an oil company. It’s a really hard task.”

He said that there wasn’t much choice, though, given shareholder activism and political pressure for fossil fuel companies to abide by guidelines in the Paris climate accord. The alternative was to wait for big financial shareholders to divest or vote you out of business, or for the company to get “regulated out of business” because of climate change, he said.

The other challenge that BP faces as it tries to reinvent itself is competition in areas where other companies have more experience.

One competitor is 8minute Solar Energy, a privately owned firm which is building solar panels expected to generate 16 gigawatts - enough to power 20 million American homes. (Eight minutes is the time it takes for solar radiation to travel from the sun to Earth.)

The company has more than 50 utility-scale projects under construction, including a $1.3 billion installation for the Los Angeles Department of Water and Power that both generates solar energy and then stores it. The projects rely on power purchase agreements, where the developer owns the solar panels and keeps a percentage of the payments for the electricity produced.

BP’s Looney said that the Lightsource solar unit has gone from 1.6 gigawatts under construction to 16 gigawatts in just two years. Looney’s goal is 50 gigawatts.

“As a climate activist I say [BP’s overhaul] sounds great,” Tom Buttgenbach, chief executive of 8minute Solar, said. “The problem the oil majors have as businesses is they’re so damn big. To invest a little in renewables isn’t going to help.”

“The key challenge for BP and other oil & gas companies isn’t just that these (renewable energy) business areas are less sexy but that they are relatively simple businesses with low barriers to entry and therefore low profitability,” Usher said in an email. Compared to oil and gas drilling, Usher said, “running a solar or wind farm isn’t very complex or difficult.”

As a result, he expects big oil companies to “gravitate towards the more challenging projects,” which include offshore wind where their experience with drilling platforms would help. They could also take on very large projects in challenging countries such as sub-Saharan Africa, where major oil companies already have experience, he said.

In the end, BP — which has searched for gas and oil reserves in farflung places such as Iraq, the Caspian Sea, Russia, the Gulf of Mexico and Alaska — could end up looking like an electric utility, albeit one that will be good for the climate.

The reason? Fighting climate will require a massive infusion of capital for a shift toward electrification. The International Energy Agency has calculated that reaching net-zero emissions by 2050 requires taking the equivalent of the largest solar park in the world and building a new one every two days. Or it could mean building the equivalent of the massive Northern Lights carbon capture project every week.

Oil and gas is one of the few industries able to make those massive investments. A Goldman Sachs report says that capital spending on low carbon projects by Europe’s big oil companies — BP, Total, Shell, ENI, Equinor and Repsol — would surpass $170 billion by 2030. While Exxon Mobil and Chevron have devoted only modest resources to low carbon projects, other smaller companies have made the switch already. Orsted, once a Danish coal company, has become one of the world’s leading installers of wind turbines.

Companies have done the easy part — changing their names. BP used to be known as British Petroleum. The Norwegian state-owned Equinor was formerly known as Statoil. Orsted was previously Danish Oil and Natural Gas, or DONG.

“If a company is to succeed over time, it must change and adapt at least as fast as its surroundings,” Equinor says on its web site. It said the name change meant it was “going from being a pure oil and gas company to become a broad energy major.”

But that might not be enough. Most companies facing disruptive technology go the way of Smith Corona, the once-dominant typewriter maker that couldn’t match the competition from personal computers and filed for bankruptcy in 1995.

BP’s annual outlook paper puts forward three widely divergent scenarios for oil and gas consumption. Looney says in the report that “the world is on an unsustainable path and its carbon budget is running out.”

Getting off that path will be difficult. The report politely adds that “a rapid and sustained fall in carbon emissions is likely to require a series of policy measures, led by a significant increase in carbon prices” — something American lawmakers have been averse to doing. Without tax-driven increases in carbon prices, oil and gas use will continue to rise, the report said. But “delaying these policies ...may lead to significant economic costs and disruption,” the company said.

“In terms of an oil company saying it will no longer emit carbon dioxide when that’s what fossil fuels are, it’s a radical change for a company BP’s size,” Usher said. “If it is successful in this it will be extraordinarily impactful. But from a business management perspective this is going to be very hard.”