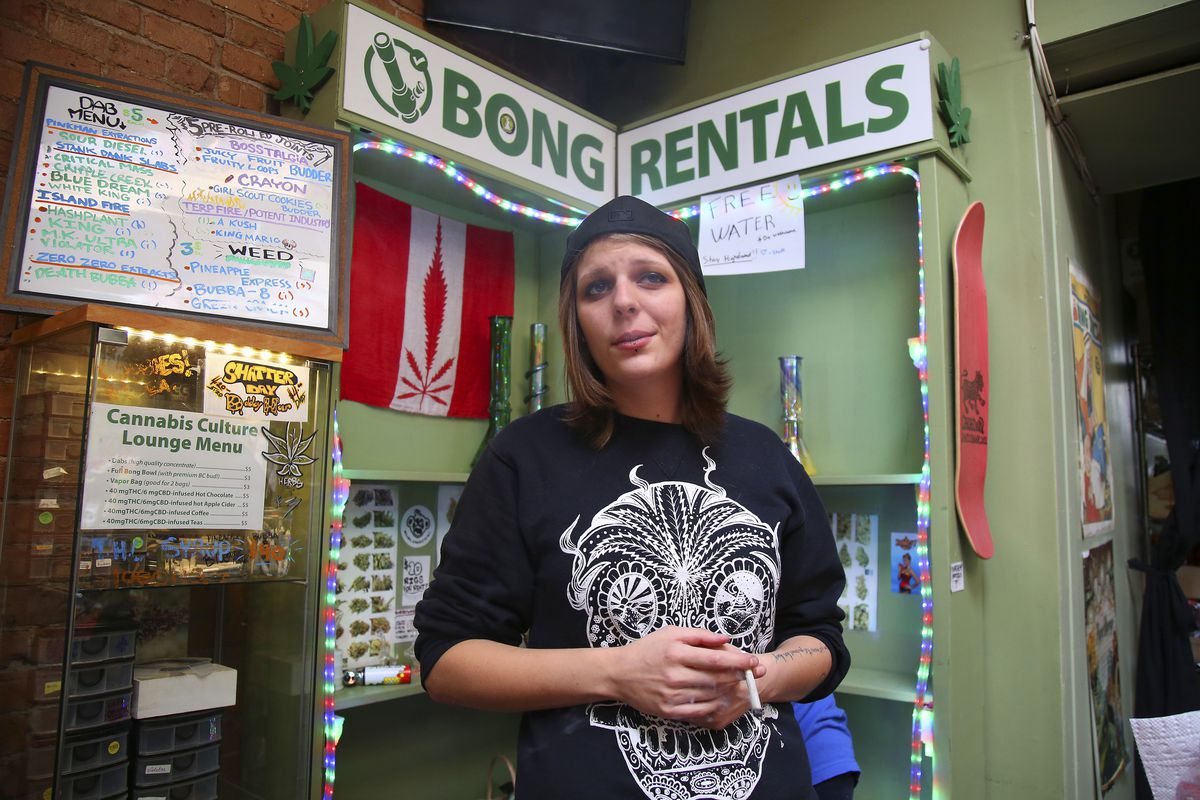 Alyssa Vail, the assistant manger at Cannabis Culture Lounge, in front of rental bongs at the lounge in Vancouver, June 22, 2016. (Jim Wilson / The New York Times)

Alyssa Vail, the assistant manger at Cannabis Culture Lounge, in front of rental bongs at the lounge in Vancouver, June 22, 2016. (Jim Wilson / The New York Times)

VANCOUVER, British Columbia — The Cannabis Culture Lounge has everything a pothead might need to feel right at home: $3 marijuana buds, bongs for rent, bags of Skittles and Doritos for sale, and black leather couches where customers can recline in zoned-out contemplation in a pungent haze. Never mind that it is all technically prohibited by Canadian law.

Still, some enthusiasts have higher hopes for the business, which opened more than a decade ago as a kind of speak-easy for marijuana smoking — long tolerated by the city's authorities. The lounge began selling marijuana after Justin Trudeau was elected prime minister in November.

"This is what recreational marijuana legalization in Canada looks like," said Jodie Emery, an activist and co-owner of the lounge and several medical marijuana dispensaries across Canada.

Trudeau has promised to make recreational marijuana legal in Canada as soon as next year, bypassing the nation's strict medical marijuana regulations. Under the latest rules for medical use, announced last week, patients must be registered, have a prescription and obtain their supplies only by mail from a government-licensed producer or by growing a limited amount privately.

[US affirms its federal prohibition on medical marijuana]

Impatient to test the shifting political boundaries, entrepreneurs have opened hundreds of illicit dispensaries across Canada, selling products like organic marijuana buds and potent cannabis concentrates while local governments and police have tended to look the other way.

The marijuana boom they hope for has yet to materialize though the Canadian government is now doing preliminary work on a measure to govern recreational use.

Even so, the authorities in some cities have begun to crack down, raiding scores of the illegal dispensaries and arresting dozens of owners and workers.

And a lobbying battle is raging between the new entrepreneurs and the licensed medical marijuana producers, who were the only ones allowed to grow and provide the plant under the old regulations. One side complains about being shut out by a politically connected cartel while the other complains about unfair and damaging competition from those who are breaking the law.

The collision of money, politics and policing has made recreational marijuana a major test for Trudeau. How he solves it will be watched closely in Canada and the United States, where federal law bans marijuana, but state laws are inconsistent.

"Canada is looking to hit a home run, rather than singles and doubles," said Allen St. Pierre, the executive director of the National Organization for the Reform of Marijuana Laws, based in the United States. "What Mr. Trudeau is trying to do is something we can only dream about here."

But it will not come quickly. A task force will take a few months to gather comments from local officials and the public before Parliament starts to draft a measure. "It's a long process, and we're hard at it," said Bill Blair, a Liberal Party lawmaker and former Toronto police chief whom Trudeau has put in charge of the marijuana effort.

Blair said in an interview that the government's top priorities are to keep marijuana away from minors and the profits out of the hands of organized crime. That may point to a system similar to the way liquor is sold in some Canadian provinces and U.S. states: strictly through government-owned or licensed stores.

Some cities in British Columbia are unwilling to wait for Ottawa though and are introducing their own marijuana policies in defiance of federal law. The province has been a center of marijuana growing and culture for decades, and it borders Washington state, where recreational marijuana is legal — and extremely profitable.

In Victoria, the provincial capital, where more than 30 dispensaries have opened in recent years, city leaders proposed new regulations in late July that would allow such businesses to operate if they abide by certain restrictions.

Victoria is following Vancouver, which has begun issuing licenses to some of the 120 or so marijuana shops in the city, provided they comply with rules, like being at least 1,000 feet away from the nearest school. Two licenses were granted in the spring, and at least 11 more are in the pipeline, officials said.

Dispensaries that do not obtain a license will be shut down, according to Kerry Jang, a Vancouver city councilor. Jang dismissed complaints that the regulations and fees — up to 30,000 Canadian dollars, or about $23,000, for a license, and 250-a-day fines for violations — were too onerous. "They got used to making money hand over fist with very little oversight," he said.

Krystian Wetulani, 32, who owns three shops, said he feels like he is stuck in red tape. Only one has been approved, and Wetulani is appealing a denial for another. Fines are mounting while he seeks locations that will conform to regulations. "It's impossible," Wetulani said. "Landlords hear the word 'weed' and just say no."

In the Downtown Eastside, a gritty Vancouver neighborhood, a crowd of people were smoking crack and shooting heroin on the sidewalk outside Farm, a dispensary with a self-avowed social-justice mission. It employs only women, many of them immigrants, former prostitutes or victims of sexual assault, and its proceeds help finance neighborhood programs like needle collection and a community garden.

The city tolerates open use of illegal drugs in the neighborhood and a local safe-injection site for heroin users, but Farm still fell afoul of the distance restrictions in the new marijuana regulations and had to win an appeal to stay open.

Wang Jingzhi, 83, an immigrant who lives in the nearby Chinatown neighborhood, said she frequently buys marijuana from Farm to soothe the aches and pains of old age. "Whenever I smoke it, my whole body feels better," she said in Chinese.

Like many in the local marijuana business, Cait Hurley, 28, the dispensary's manager, said she is worried that new government regulations will favor corporate interests and exclude women and the working class. "There's a lot of fear this will all be taken away from us," she said.

Under Trudeau's conservative predecessor, Stephen Harper, the government stripped patients of the right to grow their own medical marijuana in 2013 and centralized production and distribution through a few licensed companies. But in February, a federal court reinstated patients' growing rights; the new rules announced Thursday implemented that ruling.

Facing greater competition, the 34 government-licensed producers are calling for everyone to be held to the same rules they must follow, said Colette Rivet, executive director of a producers' trade association, Cannabis Canada. "We would be shut down if we tried to sell to dispensaries," Rivet said.

Some critics of Trudeau's legalization efforts see a conflict of interest in the close ties between political insiders shaping marijuana policy and the licensed producers. The head of the task force, A. Anne McLellan, is a former Cabinet minister who advises a law firm that represents clients in the industry, and Chuck Rifici, a founder of one of the licensed producers, was the volunteer treasurer of Trudeau's Liberal Party until June.

Rifici said he had no personal or political connection to the government's legalization process, but he acknowledged that the licensed companies "typically pull in people who know how to navigate government."

While lawmakers design new legalization policies, law-abiding entrepreneurs like Ivan Miliovski say they feel caught in the middle. Miliovski said his company, Vodis Pharmaceuticals, had spent years and millions of dollars seeking a license to produce medical marijuana under the existing regulations. His entire business plan is now in doubt.

"We don't know what's going to happen," Miliovski said. "The fear is that it won't help all the people who have struggled and advocated and pushed to make this industry legitimate."