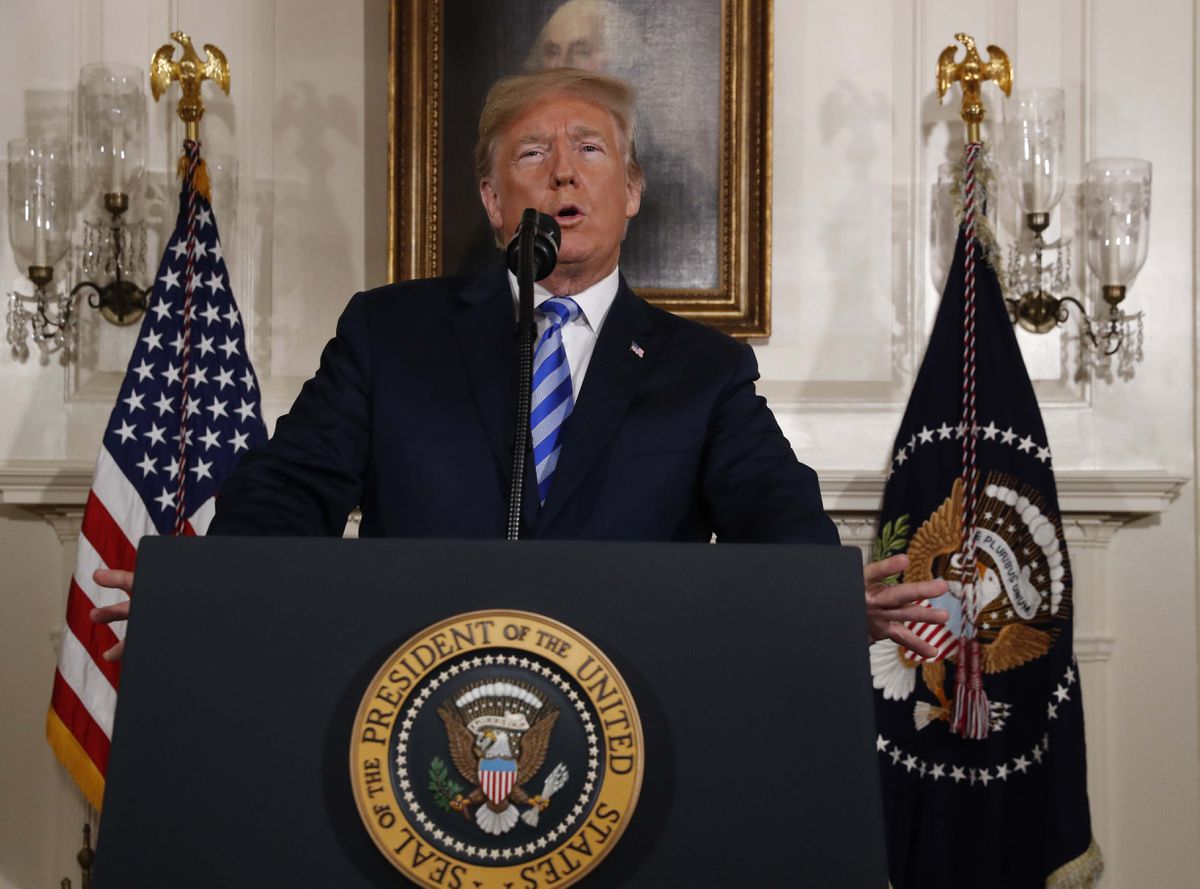 WASHINGTON – President Donald Trump on Tuesday said he is pulling the United States out of the international nuclear deal with Iran, announcing that economic sanctions against Tehran will be reinstated and declaring that the 2015 pact was rooted in "fiction."

Trump's decision, announced at the White House, makes good on a campaign pledge to undo an accord he has criticized as weak, poorly negotiated and "insane."

"The Iran deal is defective at its core. If we do nothing, we know exactly what will happen," Trump said in remarks at the White House. "In just a short period of time, the world's leading state sponsor of terror will be on the cusp of acquiring the world's most dangerous weapons."

The move amounts to Trump's most significant foreign policy decision to date. While he cast the U.S. action as essential for national security and a warning to Iran and any other nuclear aspirant that "the United States no longer makes empty threats," it could also increase tensions with key U.S. allies that heavily lobbied the administration in recent weeks not to abandon the pact and see it as key to keeping peace in the region. They tried to convince Trump that his concerns about "flaws" in the accord could be addressed without violating its terms or ending it altogether.

After Trump's announcement, the leaders of Britain, France and Germany issued a joint statement expressing "regret and concern" and pledging their "continuing commitment" to terms of the agreement, formally known as the Joint Comprehensive Plan of Action (JCPOA).

"This resolution remains the binding international legal framework for the resolution of the dispute about the Iranian nuclear programme," British Prime Minister Theresa May, French President Emmanuel Macron and German Chancellor Angela Merkel said in their statement. "We urge all sides to remain committed to its full implementation and to act in a spirit of responsibility."

That was a plea to Iran not to take steps that would break the deal, something Iranian officials have said at times they would do if Trump followed through on his frequent threats to yank the United States out of the agreement.

While the U.S. exit does not render the rest of the deal moot, it is not clear whether there is enough incentive on the parts of Iran and its international trading partners to sustain the agreement. Relief from U.S. banking sanctions was a main reason for Tehran to come to the table.

"In response to US persistent violations & unlawful withdrawal from the nuclear deal, as instructed by President Rouhani, I'll spearhead a diplomatic effort to examine whether remaining JCPOA participants can ensure its full benefits for Iran," Iranian Foreign Minister Mohammad Javad Zarif tweeted. "Outcome will determine our response."

The United States will reimpose all sanctions and could add new ones, U.S. officials said.

A memorandum signed by Trump at the conclusion of his statement means that "no new contracts" with Iran will be permitted, Bolton said. Although the United States cannot prevent the Europeans or others from having financial relationships with Iran, nearly all global transactions at some point pass through dollar exchanges and U.S. banks, arrangements that are now prohibited.

Existing contracts, Bolton said, will be subject to "wind-down provisions" of 90 days to six months, after which they will be required to "phase out." Regulations giving specific time frames, he said, will be announced by the Treasury Department.

He argued that sanctions are what previously brought Iran to the negotiating table.

"These are very, very strong sanctions – they worked last time," Mnuchin told reporters. "Our objective is to, again, eliminate transactions and eliminate access to their oil industry."

Trump's declaration puts a variety of companies in difficult positions. Though the French oil giant Total had hoped the contract it signed would be excluded from the newly reimposed sanctions, that seemed unlikely Tuesday.

The U.S. withdrawal from the Iran nuclear deal also boosts the outlook for crude-oil prices. Before the deal, the Obama administration squeezed traders and refiners to not buy Iranian oil, wringing a series of 20 percent cuts in purchases until more than 1 million barrels a day of Iran's exports had been taken off world markets. Fear of a similar mechanism has been one factor bolstering oil prices in recent weeks, though prices sagged Tuesday. The price of West Texas Intermediate crude fell about 1.4 percent, slipping to $69.74 a barrel.

Trump immediately faced questions about whether he has a plan for dealing with Iran beyond scrapping the accord, and the administration will now be under pressure to show that it has a strategy for the Middle East beyond undoing what was put in place under President Barack Obama.

"I don't see a path," said Senate Minority Leader Charles E. Schumer, D-N.Y., stressing that even if Trump had promised during the campaign to rip up and replace the Iran deal, "they don't have a real plan here."

Obama considered the agreement a signature foreign policy accomplishment, calling it the best way to head off the near-term threat of a nuclear-armed Iran and a potential opening toward better relations with Tehran after more than three decades of enmity.

Obama on Tuesday lamented Trump's decision and sought to counter his criticism that the accord had done little to check Iran's nuclear ambitions.

"The reality is clear. The JCPOA is working – that is a view shared by our European allies, independent experts, and the current U.S. Secretary of Defense," Obama said in a statement. "The JCPOA is in America's interest – it has significantly rolled back Iran's nuclear program."

Trump said Iran had lied throughout negotiations for the international deal, and he cited secret Iranian documents revealed last week by Israel that showed the Iranian regime had concealed a nuclear weapons program in the 1990s.

"America will not be held hostage to nuclear blackmail. We will not allow American cities to be threatened with destruction, and we will not allow a regime that chants 'Death to America' to gain access to the most deadly weapons on Earth," Trump said.

The chant was a fixture of pro-government rallies in Iran for decades, but despite its use during a major anti-Trump rally last year, it has largely fallen out of favor as a propaganda tool.

Trump invoked the current diplomatic efforts with North Korea and the possibility of a compact to rid the Korean Peninsula of nuclear weapons as emblematic of how he is conducting major international negotiations, saying any deal he cut would be airtight.

The reaction to the president's decision did not split neatly along party lines. While some GOP leaders applauded his decision, heralding it as an opportunity to strike a new and better arrangement, several other senior Republicans – including those who voted against the Iran deal – said the decision to withdraw was "foolhardy" and "a mistake."

"The Iran Deal is a deeply flawed agreement. . . . However, without proof that Iran is in violation of the agreement, it is a mistake to fully withdraw from this deal," Rep. Michael Turner, R-Ohio, a senior member of the House Armed Services and Intelligence committees, said in a statement.

Even House Speaker Paul Ryan, R-Wis., said in a statement that it was "unfortunate" that the United States could not come up with a way of fixing the Iran deal instead of withdrawing, and he thanked the European parties to the pact for trying to work with Washington "toward that goal." He expressed hope that they might be able to find a new way of addressing Iranian aggression before new sanctions are implemented.

Other GOP leaders cheered the move, saying it was needed to push U.S. allies and Iran to strike a more restrictive bargain.

"President Trump is right to abandon the Obama administration's bad deal," Sen. John Cornyn, R-Texas, said in a statement, adding that Congress must have a role in any new agreement.

Democratic leaders excoriated the president for a "rash" and shortsighted decision that they argued will compromise security in the Middle East and around the world.

"The President's decision to abdicate American leadership during a critical moment in our effort to advance a denuclearization agreement with North Korea is particularly senseless, disturbing and dangerous," House Minority Leader Nancy Pelosi, D-Calif., said in a statement.