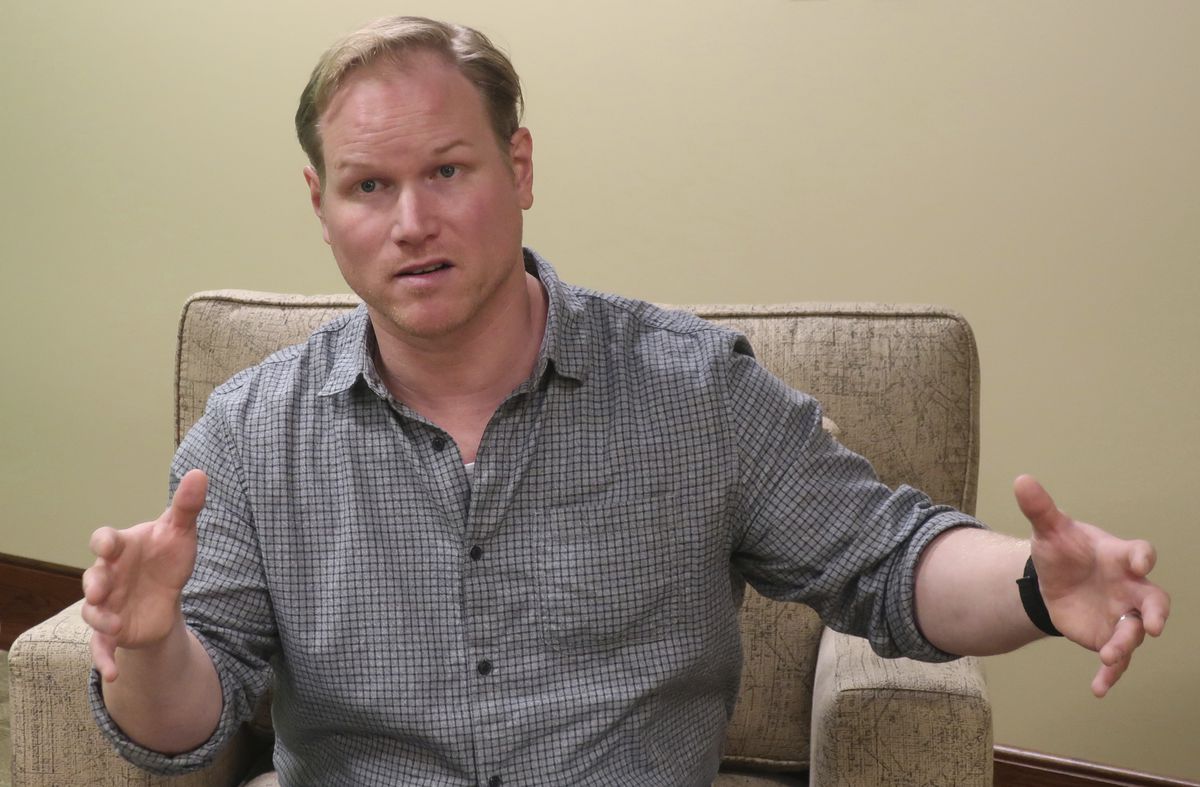 In this Sept. 15, 2018 photo, Republican congressional candidate Steve Watkins answers questions during an interview at the Statehouse in Topeka, Kan. As he campaigns in Kansas' 2nd District, Watkins faces questions about what he's telling voters about racing in Alaska's famed Iditarod dogsled race and attempting to scale Mount Everest in 2015. (AP Photo/John Hanna)

In this Sept. 15, 2018 photo, Republican congressional candidate Steve Watkins answers questions during an interview at the Statehouse in Topeka, Kan. As he campaigns in Kansas' 2nd District, Watkins faces questions about what he's telling voters about racing in Alaska's famed Iditarod dogsled race and attempting to scale Mount Everest in 2015. (AP Photo/John Hanna)

TOPEKA, Kan. — A political novice who rode his profile as an outsider-adventurer to the Republican nomination in a competitive Kansas congressional district is facing scrutiny about some of the biographical details he shares with voters.

Steve Watkins' campaign website featured a since-removed testimonial to his "heroic leadership" when a deadly earthquake shook Mount Everest during an expedition. He has acknowledged inaccurately claiming that he started a Middle East business, expanding it from three to 470 people. And there are doubts about Watkins' self-description as a devoted, sixth-generation Kansan.

Even before Watkins won the crowded primary to succeed retiring GOP Rep. Lynn Jenkins in eastern Kansas' 2nd District, some fellow Republicans were skeptical. One former GOP foe, state Sen. Steve Fitzgerald, called him "a charlatan, a fraud and an opportunist," though he now won't criticize him.

Watkins' campaign website calls him “an accomplished athlete and explorer,” citing his 2015 attempt to be the first person to race in Alaska’s Iditarod and scale Mount Everest in the same year.

His 2015 expedition on the world's tallest mountain was cut short by an earthquake in Nepal that killed nearly 8,900 people. Watkins' website previously quoted Everest outfitter Guy Cotter as saying he relied on Watkins' "heroic leadership amid the chaos." Watkins said it was in response to his calm and the moral support he offered his group of stranded climbers.

Cotter told The Associated Press that he never said it and was unaware Watkins had put the quote on his campaign website. It was removed after the AP questioned Watkins about Cotter's comments.

"There was not really anything heroic to be able to do," Cotter said in a phone interview from New Zealand. "We all felt quite hopeless ... because we were not there, where all the injured and dying people were, through that event. We were actually up on the mountain, so there was very little we could contribute."

Watkins said: "I captured the statement, to the best of my memory. He and I spoke frequently and often when we were up there, and he shared the sentiment."

As for the Iditarod, four-time winner Jeff King saw Watkins' entry this year as a stunt for his political campaign and Watkins' self-portrayal as an adventurer as a "gigantic fallacy."

Musher Tara Cicatello was at the back of the pack with Watkins, and both were forced to quit 11 days into the contest because they were so far behind. She said Watkins' chief concern after being forced to withdraw was the publicity he had lined up. He was on the phone talking about speaking engagements and left the dogs that had carried him more than 700 miles in the care of people who were already overwhelmed with other dogs, she said.

"People were irritated with Steve because they were doing more work for his dogs than he was," Cicatello said. "I don't think he mistreated them. It just sounds like he was all about his campaign and the show of it than the actual doing of it."

Watkins said he entered the 2018 dogsled race because he believed it could be his last chance to compete.

Recently the Kansas City Star reported that while Watkins claimed to have started a company and built it from scratch, in fact he joined an existing company as a contractor. To explain the discrepancy, Watkins said he helped create products and services for the company's clients.

And public records show the 42-year-old Army veteran hadn't lived in Kansas since he left high school — nearly two decades before returning to the state last year to run for Congress. During the AP interview, he acknowledged a "transient" life.

"It was exciting, and it was dangerous, challenging and meaningful," he said.

Military records show Watkins spent five years on active duty with the Army, including six months in Afghanistan. His work as a contractor began late in 2004.

He said his priorities shifted after he was injured as a contractor in Afghanistan in 2013. In a 2015 Washington Post interview, he described it as a traumatic brain injury and also said he’d been diagnosed with post-traumatic stress disorder nearly a decade earlier. He told AP the 2013 injury was a “tipping point” that pushed him toward “a more conventional life” but would not discuss details.

Watkins said Kansas “was always home in my heart.” However, he applied 11 times between 2002 and 2015 for the Alaska Permanent Fund dividend, a payment to those who have lived in the state for a full year and say they intend to remain indefinitely.

Property records show Watkins owns two condos in Alaska, purchased in 2005 and 2015, while the Topeka residence on his voter registration is rented.

Days before Watkins won the seven-candidate August primary, 40 local Republican leaders signed an open letter expressing concerns including his absence from the district. Some GOP leaders also were wary of him after three Democrats said publicly that he met with them last year about running as a Democrat — something he strongly disputes.

Many GOP doubters have since endorsed him because the stakes for the party are high. Even though President Donald Trump won the district by nearly 17 percentage points in 2016, Democrats see the seat as a prime opportunity. Watkins' better-known Democratic opponent, attorney and former Kansas House minority leader Paul Davis, carried the district when he narrowly lost the 2014 governor's race.

Davis has his own baggage after representing a legislative district in the liberal-for-Kansas city of Lawrence. Republicans have revived a 1998 incident in which Davis, then a 26-year-old attorney, was present during a drug raid at a strip club while visiting its owner, a client. Police did not accuse him of wrongdoing.

But in nominating Watkins, the GOP took a risk because he's not been active politically until now, said Bob Beatty, a Washburn University of Topeka political scientist.

"The party does not know what he was doing in Alaska and in the other places he lived," Beatty said. "It may be a good leap of faith, but it's still a leap of faith."