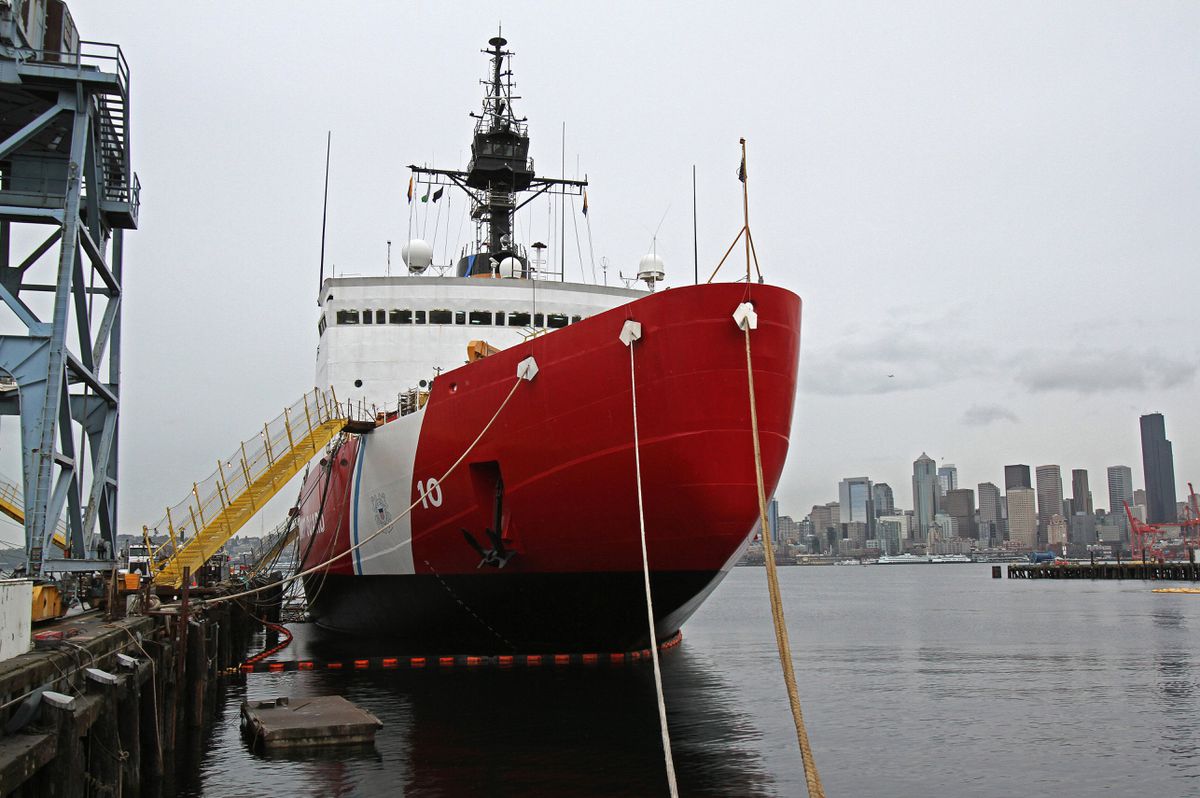 The Polar Star, a 1970s-era Coast Guard icebreaker, is undergoing a four-year, $57 million overhaul at Vigor Industrial on Harbor Island in Seattle. Its twin, the Polar Sea, is idled nearby; that ship's engines failed last year and its future is in doubt. (Mark Harrison/Seattle Times/TNS).

The Polar Star, a 1970s-era Coast Guard icebreaker, is undergoing a four-year, $57 million overhaul at Vigor Industrial on Harbor Island in Seattle. Its twin, the Polar Sea, is idled nearby; that ship's engines failed last year and its future is in doubt. (Mark Harrison/Seattle Times/TNS).

WASHINGTON — Democrats are pushing for Coast Guard icebreaker ships to be included in a funding bill that must be completed by Dec. 7 to avoid a partial government shutdown. But the move _ largely aimed at countering Russian influence in the Arctic _ is complicating negotiations already mired in debate over spending for President Donald Trump’s border wall.

The party wants $750 million to expand the Coast Guard’s small fleet of ships in the Arctic, where Russia has made inroads in recent years as the U.S. moves at a glacial pace. The money would pay for a new polar icebreaker, a large ship used for scientific research, defense and — as the name suggests — to break apart sheets of ice, allowing other vessels to traverse Arctic pathways.

The Coast Guard employed more than half a dozen of the massive ships back in the 1970s, but is down to two operable ones assigned to the Arctic — the Polar Star and the Healy, both of which have long-surpassed their 30-year service lives.

Both ships were built in Seattle and are docked at the U.S. Coast Guard base there, providing huge boosts for the area's shipbuilding industries. Along with the Alaskan congressional delegation, Washington state's two senators have played a key role over the years in securing funding for the icebreakers.

"Washington state's active military communities and ship maintenance industries, as well as our geographic proximity to Arctic waters, make it an ideal home for the nation's icebreaker fleet," said Sen. Patty Murray, D-Wash. "I think it's a critical part of our infrastructure that needs to be replaced."

Russia has more than 40 polar icebreakers, including several nuclear-powered behemoths, extending its military and economic presence in the region as warming temperatures and melting ice make more of the Arctic accessible. Not all experts agree that Russia poses a security threat in the Arctic, but some lawmakers don’t want to take any chances.

Rep. John Garamendi of California, the top Democrat on the Coast Guard and Maritime Transportation subcommittee, said adding more polar icebreakers to the region will help the U.S. guard against growing Russian influence.

Russians are "able to assert their dominance" of much of the Arctic, thanks to its large fleet, and the Coast Guard is "hard-pressed" to stop them, Garamendi said.

"What do you do when some boat hits an ice flow? Do we have a Titanic issue?" he said. As of now, there's "no way to provide assurance of search and rescue."

But Republicans see more imminent danger from Mexico, which Trump has long warned is "not sending (its) best" people across the border.

"They're bringing drugs. They're bringing crime. They're rapists. And some, I assume, are good people," he said back in 2015, later making a massive wall along the border one of his main campaign promises.

Trump has failed to deliver so far, but Republicans are making a push to fund the wall before the end of the year. In the House of Representatives, Democrats proposed reallocating $750 million of the $5 billion earmarked for the border wall and putting it toward a new icebreaker.

Rep. Kevin Yoder of Kansas, the Republican chairman of the House's Homeland Security subcommittee, opposed that unsuccessful Democratic amendment in July, but said this month that an additional icebreaker is "one of the things Democrats really want, and Republicans too."

Yoder said the icebreaker funding is one of the biggest hold-ups in negotiating a compromise between the House and Senate, which includes money for the polar ship and $1.6 billion for the wall in its version of the bill.

Garamendi, however, is confident the two chambers of Congress will be able to break the ice during negotiations, and thinks the House will accept the Senate's version.

"We have been fighting with Mr. Trump about this for quite a while. He keeps trying to reduce the funding for the Coast Guard so that it can go to the border wall," he said. "And we keep saying, 'Wait a minute, the Coast Guard is a border wall, and frankly far more effective than any other piece of concrete or steel wire.'"

David Satter, a journalist and Russian expert at the Hudson Institute, said there's "really no comparison" when examining whether Russia or illegal immigration from Mexico is the bigger threat.

Russia "has a huge nuclear arsenal and is still very powerful militarily and is in a position to cause a great deal of trouble in the world," Satter said.

Some argue that icebreakers may be needed to ease navigation and help with emergency response, but offer little benefit for military security. Andreas Kuersten, a law clerk for the U.S. Court of Appeals for the Armed Forces, wrote in 2016 that the idea of a competition for control of the Arctic is overblown: "There is no race to be won. Most Arctic territory and resources are solidly within the jurisdictions of Arctic states."

Even if military force in the Arctic was needed, Kuersten wrote, icebreakers are "massive and ungainly beasts" that would not be of much use in battle.

Though Washington politicians have pushed for the icebreaker, there is no guarantee the new ship, which would be operable in 2023, would be built in Seattle. Bollinger Shipyards, one of the companies competing for the Coast Guard’s icebreaker contract, said it would carry out the construction in Tampa, Florida.

Coast Guard leaders have attempted to highlight the need for another ship that can slice through the ice, renaming its program this fall after congressional funding appeared to be in jeopardy. The military branch is hoping for six new icebreakers in the next several decades.

“When we talk about icebreaking capability, that doesn’t sell very well to all audiences,” said Rear Adm. Melvin Bouboulis, according to the U.S. Naval Institute. “We understand that some folks think (it just) goes and breaks ice, but we’ve purposely changed the name of that program to Polar Security Cutter because it is really the U.S. presence in the Arctic regions and preserving our national interest and security in those areas.”