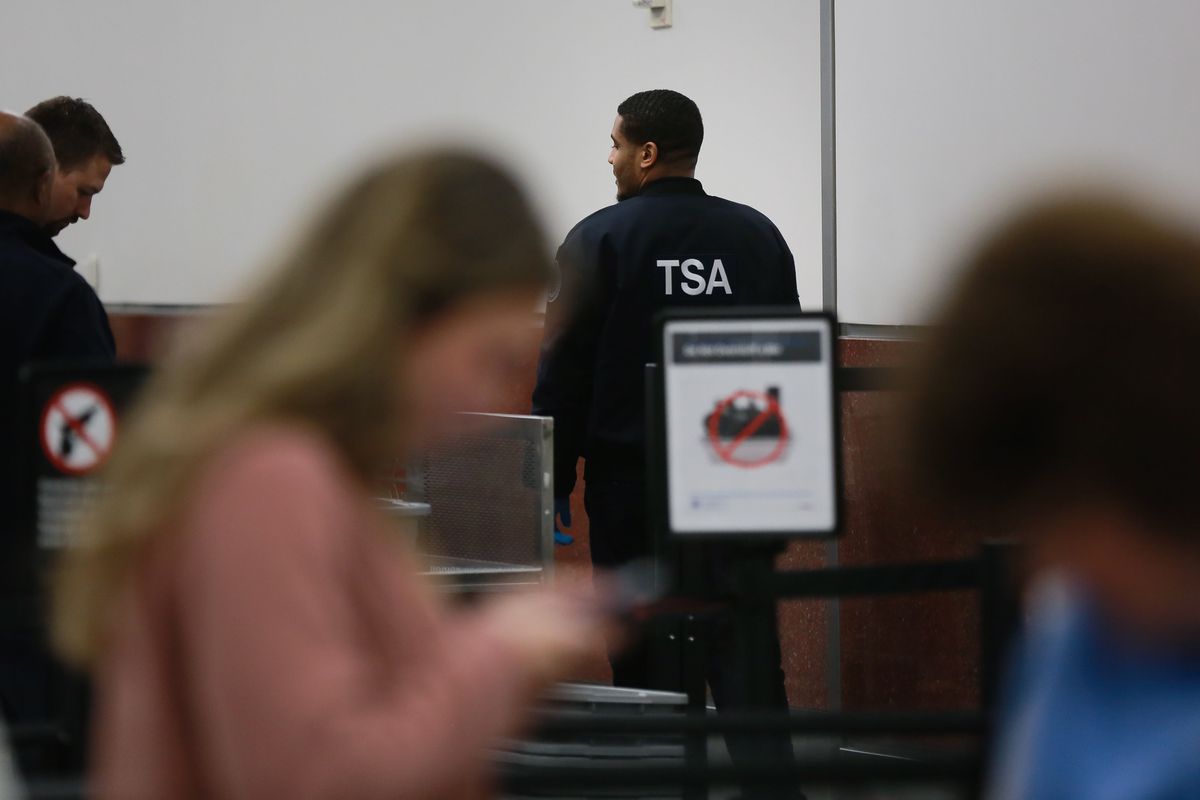 Transportation Security Administration agents have been calling in sick at a high rate during the partial government shutdown that precludes them from receiving their paychecks. As a result, security lines in Atlanta's Hartsfield Jackson International Airport, shown Monday, Jan. 14, 2019, and others across the country have been much longer than usual. Bloomberg photo by Elijah Nouvelage.

Transportation Security Administration agents have been calling in sick at a high rate during the partial government shutdown that precludes them from receiving their paychecks. As a result, security lines in Atlanta's Hartsfield Jackson International Airport, shown Monday, Jan. 14, 2019, and others across the country have been much longer than usual. Bloomberg photo by Elijah Nouvelage.

The Federal Aviation Administration is calling back thousands of furloughed inspectors to address safety concerns while airport security checkpoints have been shut down and agents have been redeployed amid intensifying problems related to the nation’s longest government shutdown.

Key work to improve safety has been stalled, and passengers have occasionally faced painful delays that could worsen as the shutdown continues and more workers who continue their jobs without pay decide it's no longer worthwhile to do so. While air traffic controllers say they have been keeping the nation's airspace as safe as before the shutdown, they question how long that can be sustained.

"Is it safe? Yes, it's safe. Can we survive this for long? That's a question I don't want to answer. I hope we can," said Andrew LeBovidge, Southwest region vice president for the controllers union, who added that the shutdown is forcing colleagues to face questions they - and the nation - should not have to confront.

"Do you want a surgeon to be distracted by his financial problems when he's operating on a cardiac patient - and for how long? The first patient? The second patient? The third patient?" LeBovidge asked. "Right now, the layers of the system remain intact because the controllers are diligently doing their work. But the distractions that are continuing to mount on their psyches are reaching levels they can't endure for a long time."

FAA documents released Tuesday show the agency is recalling more than 3,400 workers who had been furloughed but are now acknowledged to be vital for protecting "life and safety."

At the onset of the shutdown in December, the FAA's Office of Aviation Safety - which is responsible for "certification and safety oversight of approximately 7,300 U.S. commercial airlines and air operators" - had just 216 people listed as having a "life and safety" exception requiring them to remain on the job.

By Friday, the FAA said, it will have more than 3,100 employees back at work under that exception in the office, a major restoration that points to just how much critical work has been going undone. In all, 2,200 safety inspectors are being called back, according to the FAA.

Such midcourse shifts have become a hallmark of the Trump administration's shutdown strategy.

"We proactively conduct risk assessment, and we have determined that after three weeks, it is appropriate to recall inspectors and engineers," an FAA spokesman said, adding that the workers will "ensure continuous operational safety of the entire national airspace."

Among the FAA safety personnel forced out of work by the shutdown are those who inspect aircraft, issue medical and other certifications, and test equipment used by air traffic controllers, according to the agency.

Even with the latest recall of thousands of workers, important safety work remains suspended by the political impasse over President Donald Trump's insistence on billions in funds to build a border wall. For example, technical improvements meant to cut down the chances that pilots will land in the wrong place are being delayed.

On a summer night in 2017, a pair of Air Canada pilots nearly landed their Airbus A320 on passengers waiting to take off at San Francisco International Airport. The descending airliner was 100 feet from the ground before it pulled up, barely missing four airliners waiting on the taxiway.

To help air traffic controllers ward off such pilot mistakes, the FAA has been adapting existing radar used to track planes that are already on the ground. But that work is on hold, according to controllers and the FAA.

There are thousands of things - from the subtle and psychological to the highly technical - that contribute to the extraordinary safety record of the U.S. commercial aviation system, in which there has been just one death on a U.S. carrier in nine years. But for weeks, the federal government has been conducting something of an experiment: What happens when politicians decide that safety buffers meant to minimize risk can be sacrificed in pursuit of unrelated priorities?

And it has become an unsettling symbol for many.

"Who feels safe flying today?" asked Rep. Brian Fitzpatrick, R-Pa., in an interview with The Washington Post over the weekend, during which he also called on Senate Majority Leader Mitch McConnell, a Republican, to change course and hold a vote on a bill to end the partial shutdown.

Leaders of the FAA and the National Air Traffic Controllers Association, which unsuccessfully sued the Trump administration seeking pay for employees, say the skies remain safe. But academic researchers say there are limits, and it is unclear when they might be reached.

Erin Bowen, a professor who specializes in aviation psychology at the Embry-Riddle Aeronautical University's Arizona campus, said "accidents are almost inevitable" when people are stressed about not getting paid.

"It absolutely puts aviation safety in jeopardy," she said. "You're telling all of the support staff that makes our air system the safest in the world, 'Sure, do your job, but don't get the money you depend upon to feed your family.' "

Whether it's highly compensated air traffic controllers or Transportation Security Administration workers who are much lower on the federal pay scale, "people are simply not able to be as attentive to their job tasks when they're worried that they're not getting a paycheck."

Jirs Meuris, an assistant professor of management and human resources at the University of Wisconsin-Madison, said his research with truck drivers has shown that "financial worry is associated with a higher probability of a preventable accident." And while "many air traffic controllers suppress their feelings of financial anxiety, this suppression actually makes people more error-prone as well because it takes cognitive effort to do so," Meuris said.

A food bank has been set up at Tampa International to help some of the Florida airport's workers during the shutdown. About 700 federal employees work at the airport, including about 600 for the TSA and the remainder for the FAA and U.S. Customs and Border Protection.

"I think it's tough," said Wendy Smith, a TSA worker who showed up at the pantry this week with her young son, not knowing when she'll get her next check. So "this is superhelpful."

"I don't blame anybody. I just hope it will get worked out," Smith said, before heading off with a box of groceries.

The TSA has been forced to temporarily shut down security checkpoints in Miami and Houston because of a sharp increase in people calling in sick. The agency said about 1 in 15 checkpoint workers didn't report for duty Monday. This time last year, the number was about 1 in 40 workers.

At Houston's George Bush Intercontinental Airport this week, one passenger told a TSA agent checking IDs and scanning boarding passes, "Thanks for working today." The agent responded: "Don't thank me. Call the government up, and tell them to do something about this. Seriously, call them. Email them. Something."

TSA officials attributed the waits to a combination of high passenger volume and a higher than average number of TSA absences. Data released by the agency said the longest wait was 88 minutes; it was 55 minutes in the TSA Pre line.

And all these challenges are coming during the offseason, raising the stakes of a more prolonged shutdown.

On Jan. 2, a gun made it through a TSA checkpoint in Atlanta and onto a Delta Air Lines flight to Tokyo. A TSA spokesman said that the incident was not related to the shutdown and that there was no staffing shortage.

"TSA has determined standard procedures were not followed and a passenger did in fact pass through a standard screening TSA checkpoint with a firearm," the agency said. "TSA has held those responsible appropriately accountable."

The passenger reported the incident while on the flight and was met by authorities in Japan. But the incident was worrisome nonetheless.

TSA screeners stop passengers - many of them forgetful - carrying loaded guns in their carry-on luggage fairly regularly. A reported 4,000 firearms were seized at checkpoints in 2017. Instances in which armed passengers make it through security, however, are rare.

"They're working a lot of overtime. They turn around, and there's no cavalry coming to help," Marinitti said. "That's where we see the layers, the redundancies that are in place to maintain safety are starting to get peeled away."

Still, he said, "I'm going to give you a one-word answer: Yes. The national airspace system in this country is as safe today as it was prior to the shutdown." And, due to their continued diligence, controllers remain "the one thread holding it together."

But the shutdown has been disruptive and made their work harder.

Key FAA support staffers working on preparations for the Super Bowl in Atlanta - where controllers say perhaps 1,500 extra planes, many of them corporate jets, are expected each day - were among the furloughed workers, short-circuiting far-reaching logistical efforts, said Dan McCabe, a controller in Atlanta.

"Air traffic controllers still have questions as to how they will pull off a feat as big as the Super Bowl while working some of the busiest airspace in the country," McCabe said.

"It's busy here. We're used to busy. Volume doesn't scare us," McCabe added. But "what happens is, you start adding a whole bunch of extra airplanes. If you've got a 10-pound bag, you can put 10 pounds in the bag. You can't put 11 pounds in the bag," and trying to do the airspace equivalent without careful coordination across local airports and routes could lead to delays for airlines and private aircraft.

"We want to streamline the way we get airplanes in so we can be efficient with it. We're going to be safe. We want to be safe and efficient," McCabe said.

"We've been planning alongside all the right people in Atlanta for many months," said TSA spokesman Jim Gregory.

FAA spokesman Gregory Martin said the agency recently brought back "the necessary personnel for planning and training for the Atlanta Super Bowl, which was initially delayed. We have recalled the necessary people, so this is back on track."

Most of the agency's work has been at a standstill since the shutdown, however. That means it has been unable to approve new airline plans or commercial spaceflights. For example, Southwest Airlines announced plans in the fall to add flights to Hawaii from three California cities. But the new service had not started when the shutdown began.

"If it didn't happen prior to the shutdown, we're not looking at (approving) it," Martin said. "If it was a part of operations at the time the shutdown started, we're all over it."