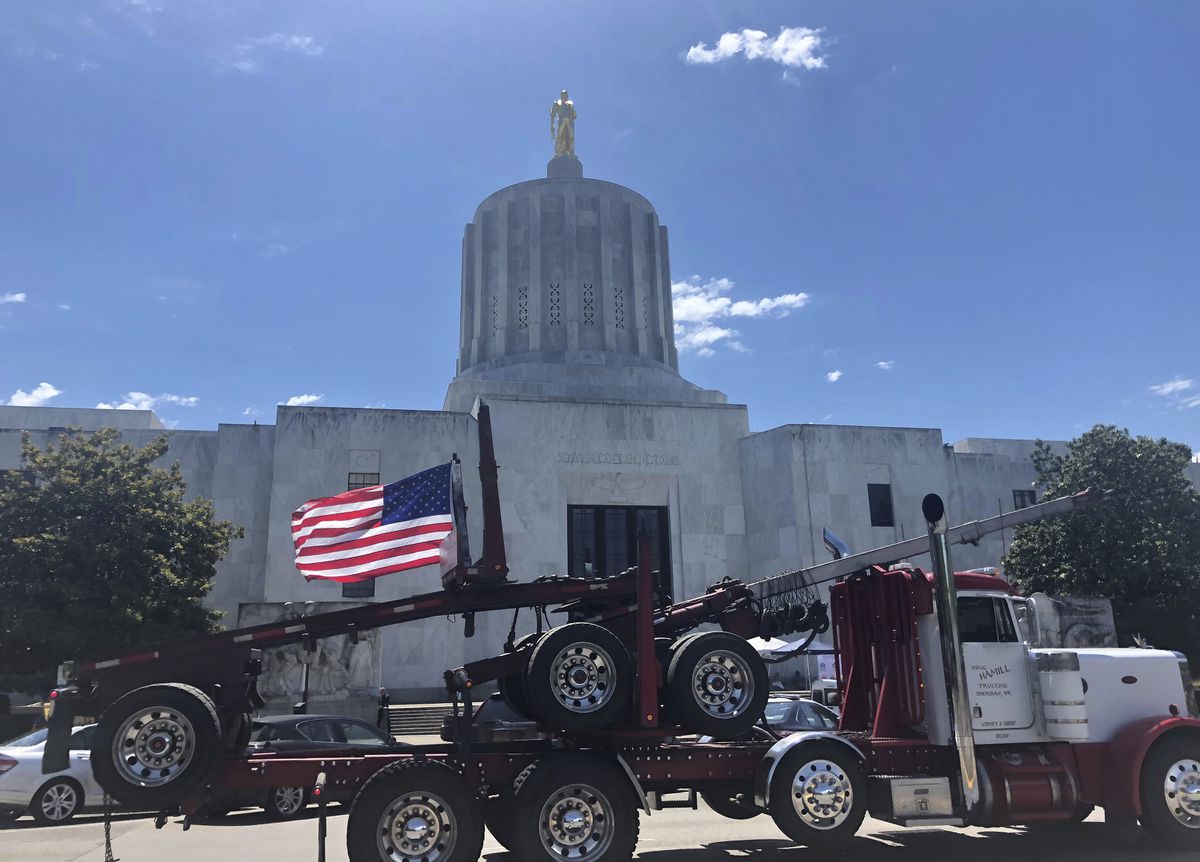 FILE - In this June 12, 2019, file photo, a truck moves around the Oregon state Capitol during a protest against climate bills that truckers say will put them out of business, in Salem, Ore. Oregon is on the precipice of becoming the second state after California to adopt a cap-and-trade program, a market-based approach to lowering the greenhouse gas emissions behind global warming. (AP Photo/Sarah Zimmerman, File)

FILE - In this June 12, 2019, file photo, a truck moves around the Oregon state Capitol during a protest against climate bills that truckers say will put them out of business, in Salem, Ore. Oregon is on the precipice of becoming the second state after California to adopt a cap-and-trade program, a market-based approach to lowering the greenhouse gas emissions behind global warming. (AP Photo/Sarah Zimmerman, File)

Oregon’s top lawmakers will shut down the state capitol after receiving threats from militia groups. Authorities say they are planning to demonstrate there in support of the 11 Republican senators who fled the state to dodge a vote on climate change.

State Senate President Peter Courtney, a Democrat, told his colleagues on Friday that Oregon State Police had informed him there was a credible threat to him, the rest of the remaining senators - all of whom are Democrats - and the building's staff.

"It was obviously a credible threat because Sen. Courtney wouldn't close it down for no reason," Courtney's spokeswoman Carol Currie told The Washington Post.

State police confirmed the danger in an emailed statement.

"We have been monitoring information throughout the day that indicates the safety of legislators, staff and citizen visitors could be compromised if certain threatened behaviors were realized," wrote Capt. Timothy Fox.

Friday night’s escalation was the latest in a bizarre feud between the state’s Democrats and Republicans, who have clashed repeatedly during this year’s legislative session.

Early Thursday morning, every GOP senator bolted, reportedly for the Idaho line, rather than sit idly in the chamber as their opponents passed a sweeping cap-and-trade bill. Gov. Kate Brown, a Democrat, responded by directing state troopers to corral the Republicans and return them to the state house.

Democrats have a supermajority in Oregon, allowing them the rare opportunity to pass the legislation of their dreams - but without Republicans, they can't achieve a quorum. No quorum, no vote. GOP senators said they had two options: allow a bill to pass that they said would devastate their constituents, or make a run for it.

"We will not stand by and be bullied by the majority party any longer," Senate Republican Leader Herman Baertschiger said in a Thursday statement. "Oregonians deserve better."

Critics of the cap-and-trade measure say it would raise the cost of fuel and have a disproportionate impact on truckers and loggers, many of whom live far from the state's largest cities.

The rift has become a proxy for the deepening divide between the state's ultraliberal urban enclaves and its sprawling rural counties with proud libertarian streaks. Currie said she feared the militia groups threatening action may be affiliated with the anti-government activists who led an armed occupation of a federal wildlife preserve in the state more than three years ago.

Led by Idaho rancher Ammon Bundy in 2016, about a dozen rogue fighters turned the Malheur National Wildlife Refuge - a federal nature reserve established in 1908 - into a militia stronghold. They were demonstrating their support for infamous ranchers Dwight and Steven Hammond, a father-son duo sentenced to five years in prison for sparring the government and setting fires on federal land.

The Bundys threatened to occupy the reserve for "years" in protest. Their efforts lasted 41 days.

News of the state house closure on Friday prompted the state Republican Party to suggest that the Democratic leadership canceled the session out of "a fear that Republican voters might show up."

Sen. Sara Gelser criticized the statement on Twitter, writing that she and her colleagues "were notified we were physically in danger."

"I'll keep showing up to do what voters sent me to do," she continued. "Rs have obligation to reject violent threats. I want all colleagues & staff to be safe, regardless of how they vote."

The militia groups' alleged threat was the second apparent mention of violence to mar state politics in recent days.

Sen. Brian Boquist, one of the Republicans currently on the lam, sent a warning to state police Wednesday.

“Send bachelors and come heavily armed,” Boquist said. “I’m not going to be a political prisoner in the state of Oregon. It’s just that simple.”