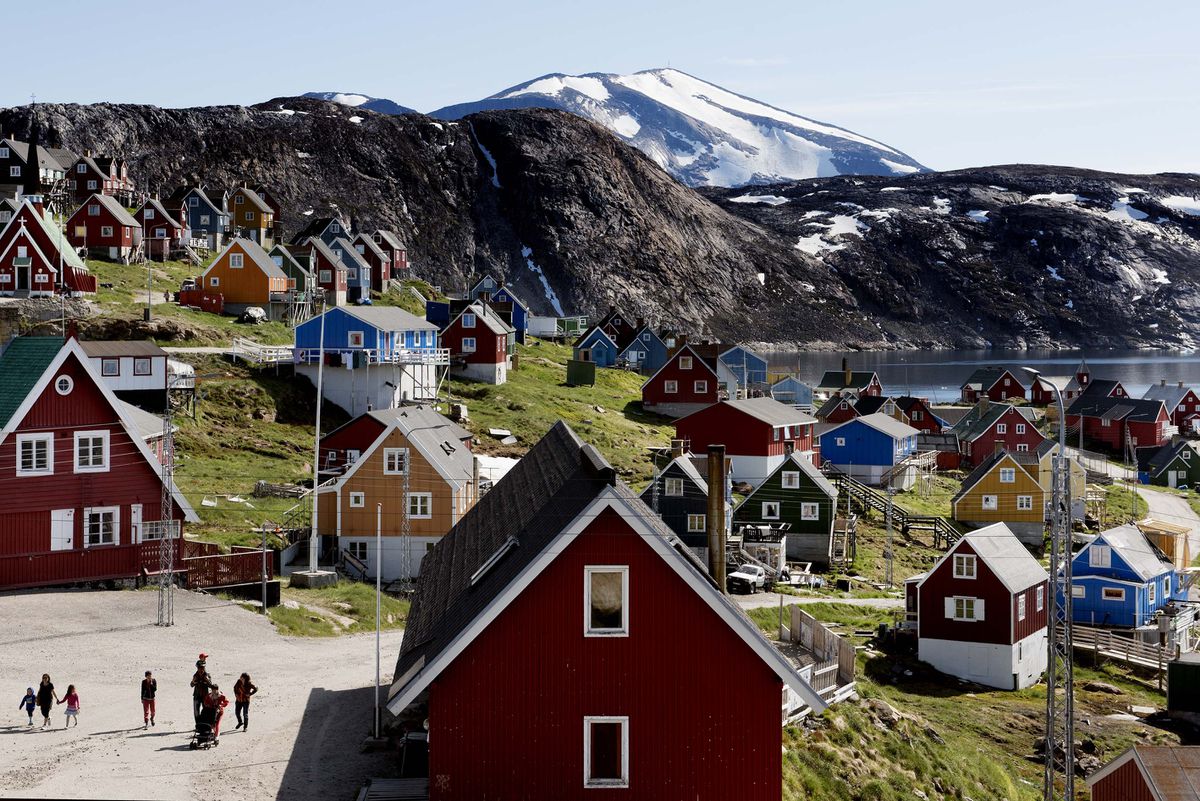 FILE - This July 11, 2015 file photo shows a general view of the town of Upernavik in western Greenland. (Linda Kastrup/Ritzau Scanpix via AP)

FILE - This July 11, 2015 file photo shows a general view of the town of Upernavik in western Greenland. (Linda Kastrup/Ritzau Scanpix via AP)

President Donald Trump on Tuesday abruptly called off a trip to Denmark, announcing in a tweet that he was postponing the visit because the country’s leader was not interested in selling him Greenland.

The move comes two days after Trump told reporters that owning Greenland, a self-governing country that is part of the kingdom of Denmark, “would be nice” for the United States from a strategic perspective.

Trump's announcement suggests that, despite his denials, the central purpose of his trip had been discussion of a U.S. purchase of the massive, glaciered island, which holds increasing value as melting sea ice opens new parts of the Arctic to shipping and resource extraction.

The episode was also a rare window into secret White House national security planning, albeit with a Trumpian dealmaker's twist and an element of the surreal. Trump touts his real estate background as a primary job qualification, promising voters he can negotiate better than his predecessors and spot a good deal. But the notion of buying a part of another country was widely met with surprise and bafflement when news broke last week of Trump's interest in the island.

In his tweet, Trump said that while Denmark is "a very special country with incredible people," he is postponing his scheduled meeting with Prime Minister Mette Frederiksen based on her statement "that she would have no interest in discussing the purchase of Greenland."

“The Prime Minister was able to save a great deal of expense and effort for both the United States and Denmark by being so direct,” Trump added. “I thank her for that and look forward to rescheduling sometime in the future!”

....The Prime Minister was able to save a great deal of expense and effort for both the United States and Denmark by being so direct. I thank her for that and look forward to rescheduling sometime in the future!

Over the weekend, Frederiksen had visited Greenland and told reporters there that Trump's idea of buying the island was "absurd."

It was not clear whether Trump will still go to Poland, as he had been scheduled to do for two days ahead of his trip to Copenhagen in early September.

On Sunday, Trump confirmed that he has asked his administration to explore the possibility of buying Greenland, opining that "essentially, it's a large real estate deal." But he added that the matter was "not number one on the burner" and claimed that his visit to Denmark was not related to his interest in the island.

"Not for this reason at all," he said.

Trump had also jokingly acknowledged his interest in purchasing the island for the United States on Monday, when he tweeted a doctored photo of a huge gold Trump Tower planted on what appears to be a fishing village there.

“I promise not to do this to Greenland!” Trump wrote.

I promise not to do this to Greenland! pic.twitter.com/03DdyVU6HA

People familiar with the president's interest in Greenland said he had been talking about the potential purchase for weeks. Senior administration officials had discussed the possibility of offering Denmark a deal where the United States would take over its annual $600 million subsidy to Greenland in perpetuity, two people familiar with the talks said.

They also discussed giving Denmark a large one-time payment as well to incentivize the transfer, the people said.

Greenlanders, many of whom chafe at Danish rule, reacted with scorn to word last week that Trump was keenly interested in making an offer.

Both Danish and Greenland officials have said in recent days that the island is not for sale.

"Greenland is rich in valuable resources such as minerals, the purest water and ice, fish stocks, seafood, renewable energy and is a new frontier for adventure tourism," Greenland's Ministry of Foreign Affairs said Friday in a tweet. "We're open for business, not for sale."

The United States has become increasingly interested in the Arctic because Chinese and Russian expansion in the region as melting ice makes it more accessible.

China declared itself a "near-Arctic nation" last year and has defended its desire for a "Polar Silk Road" in which goods would be delivered by sea from Asia to Europe.

China also recently sought to bankroll the construction of three airports in Greenland, drawing concern from then-Defense Secretary Jim Mattis and prompting the Pentagon to make the case to Denmark that it should fund the facilities itself rather than rely on Beijing.

One U.S. official involved in Arctic issues expressed surprise Tuesday night that Trump was interested in buying Greenland. The official, speaking on the condition of anonymity due to the sensitivity of the issue, noted that the Alaska congressional delegation has been trying to get the Pentagon to spend more money on operations in the Alaskan Arctic, and that they likely would be concerned that a Greenland deal could jeopardize that.

The effort to get more attention on Alaska in Washington this year included Sen. Dan Sullivan, R-Alaska, putting a temporary hold this spring on Gen. David Berger's nomination to be the new Marine Corps commandant. Sullivan eventually dropped his hold, saying only that he had worked out his concerns with Pentagon officials.

Trump had planned to dine with Denmark's queen before meetings in Copenhagen with Danish political leaders. Before news of Trump's interest in Greenland, his visit was seen as an offbeat thank-you to a small country that has been a stalwart NATO member and that supported U.S. military actions.

"This is no longer funny. Danish troops fought alongside the US in Afghanistan and Iraq. 50 Danes died," Brookings Institution Europe specialist Thomas Wright tweeted Tuesday. "The president dishonors the alliance and their sacrifice. On the same day he sought to appease [Russian President Vladimir] Putin by supporting his return to the G-8."

Trump earlier Tuesday renewed his call for Russia to be allowed to rejoin the Group of Seven industrial nations whose annual meeting he will attend this weekend in France.

Trump is not the first U.S. president to propose buying Greenland. After World War II, President Harry S. Truman's administration offered to purchase the country from Denmark for $100 million. The U.S. military had a presence in Greenland during the war as a means to protect the continent if Germany tried to attack.

Trump told reporters Sunday that owning Greenland is "hurting Denmark very badly" and that "they carry it at a great loss," although he did not immediately provide evidence to back up those claims.

Although many in the United States have mocked the idea, one Democratic lawmaker on Sunday voiced openness to considering it. Sen. Joe Manchin, D-W.Va., said on CBS’ “Face the Nation” that “changes are happening” in Greenland as a result of climate change, “and the people up there understand it and they’re trying to adjust to it.”

"We have a very strategic base up there, a military base, which we visited," Manchin said, referring to his visit to Greenland earlier this year as part of a bipartisan congressional delegation. "And I understand the strategy for that in that part of the world and the Arctic opening up the way it is now."

In an appearance on the Fox Business channel Tuesday night, Fox News host Pete Hegseth, a favorite of the president, took an optimistic view of events, musing that perhaps Denmark was simply holding out in the hopes of getting Trump to reveal how much he was willing to pay for the island.

"It's one of these big, bold ideas that no one would've thought of, that the modern era mostly bats aside and says would never happen," Hegseth said of buying Greenland. "But hey, maybe it's just an initial rebuff. Maybe it's part of their negotiations. 'Hey, we want a better price for Greenland.'"

The Washington Post’s Damian Paletta contributed to this report.