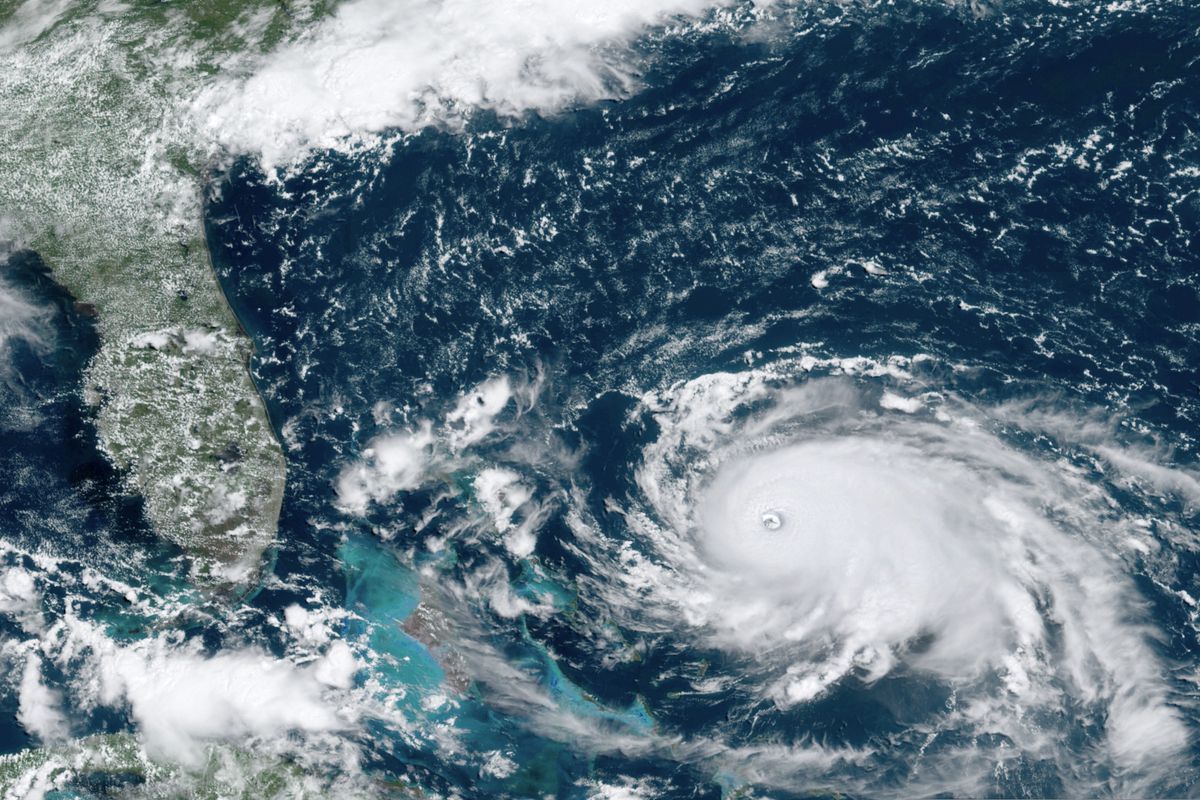 This GOES-16 satellite image taken Saturday, Aug. 31, 2019, at 16:00 UTC and provided by National Oceanic and Atmospheric Administration (NOAA), shows Hurricane Dorian, right, churning over the Atlantic Ocean. Hurricane Dorian bore down on the Bahamas as a fierce Category 4 storm Saturday, with new projections showing it curving upward enough to potentially spare Florida a direct hit but still threatening parts of the Southeast U.S. with powerful winds and rising ocean water that causes what can be deadly flooding.(NOAA via AP)

This GOES-16 satellite image taken Saturday, Aug. 31, 2019, at 16:00 UTC and provided by National Oceanic and Atmospheric Administration (NOAA), shows Hurricane Dorian, right, churning over the Atlantic Ocean. Hurricane Dorian bore down on the Bahamas as a fierce Category 4 storm Saturday, with new projections showing it curving upward enough to potentially spare Florida a direct hit but still threatening parts of the Southeast U.S. with powerful winds and rising ocean water that causes what can be deadly flooding.(NOAA via AP)

WEST PALM BEACH, Fla. - Hurricane Dorian careened toward the southeastern United States on Saturday, taking an unpredictable path that has residents of four states on edge.

Dorian had swelled to a more powerful Category 4 hurricane, with raging winds of more than 150 mph. The storm could bring life-threatening storm surge as it plows up the Atlantic coast toward Georgia and the Carolinas.

And experts warned that the storm could strengthen even more before it reaches the United States.

"Dorian is forecast to move over a deep layer of very warm waters, which is like high-octane fuel for hurricanes," National Hurricane Center senior forecaster Lixion Avila wrote in a Saturday update.

But even as officials urged residents to prepare for the worst, they struggled to deal with the storm's unpredictable path. On Friday, it looked as if Dorian would bear down on South Florida. By Saturday afternoon, the National Hurricane Center said Dorian might skirt the state's coast without making landfall, instead striking somewhere along the Carolina coast midweek.

Even so, officials urged Florida residents not to let their guard down. Florida Gov. Ron DeSantis (R) warned that Dorian could be dangerous even if it never touches land.

Jared Moskowitz, director of the Florida Division of Emergency Management, said "most of the east coast" of Florida will probably see high winds and flooding. "At this point, the only thing consistent about this storm has been its inconsistency," Moskowitz said in a news release.

But the shifting track confounded public officials, who wrestled with whether to declare mandatory evacuations. Five counties issued voluntary evacuations, but only two - Martin and Brevard - planned to make it mandatory for residents on barrier islands.

That country is preparing for "catastrophic" wind, rain and storm surge Sunday, especially in the north, said Lindsay Thompson, public information officer for the National Emergency Management Agency in Nassau.

"It's slow moving, so it's really not good," Thompson said. "We are a low-lying island nation. We're looking at a storm surge in some areas up to 12 feet, 15 feet."

She said Prime Minister Hubert Minnis warned residents Saturday afternoon of the danger from Dorian. "He made a final appeal for people to get off the smaller islands," she said. "He said basically, you will die if you stay."

Hurricane-force winds extended out 30 miles from the well-defined eye of the storm, and tropical-storm-force winds of up to 74 mph extended outward 115 miles, according to the National Hurricane Center.

The wind field and uncertain track kept people on the east coast of Florida in active preparation mode Saturday. Florida Power and Light (FPL), which provides electricity to nearly 10 million people in the state, called in 18,000 restoration crew workers from across the country and Canada. They were deployed around the state - including at the Daytona Motor Speedway - waiting for the power outages officials said are inevitable with a strong hurricane.

"Rest assured that Florida remains in the cone of uncertainty, and this is still a very dangerous storm," he said.

Floridians seemed to be heeding that warning Saturday. Water, bread, ice and plywood were selling fast at stores along the state's east coast.

"We're kind of last minute," said Christyna Hooks, as she and roommate Teika Woodbury wove through the waiting cars in the parking lot of a West Palm Beach Home Depot. "Honestly, I don't even want to put up shutters. We need wood - our landlord said it was on us to put it up - and snacks and lots of water."

"And alcohol," she added.

Stores selling supplies were busy, but places that would normally be crowded with tourists on Labor Day weekend were quiet. Orlando International Airport, the busiest in the state, plans to cease commercial operations at 2 a.m. Monday.

On Saturday morning, entire blocks of the Daytona Beach boardwalk were deserted, and Labor Day crowds were nowhere to be found. Amusement park rides were shut down, and crews were boarding up an ice cream shop.

Those who stayed said their heads were spinning from a week of changing expectations for the slow-moving storm.

"It's annoying not knowing," said Eileen Keenan, as she sipped a salted caramel mocha at a beachside Starbucks.

Keenan filled her car with gas and went grocery shopping without issue earlier in the week. After the hurricane was upgraded to Category 3 on Friday, the same station was out of gas and the same store was out of water.

Karen Cook, manager of a sprawling beachfront souvenir shop, frowned as she watched the Weather Channel on a large TV behind the cash register.

"I can't hear about it anymore," she said, planning to switch channels to HGTV or college football. "It's so much stress . . . making sure we have food preparations and the kids taken care of. The waiting game, it's just so hard. But that eye is so big."

St. Johns County in North Florida offered free sandbags to residents, and city workers placed hundreds of them along the streets of St. Augustine.

In South Florida, residents who rushed to board up windows and stock up on supplies heading into the weekend found themselves out of the cone Saturday. But many of them were still wary.

On Fort Lauderdale's beaches, crowds were sparse, despite sunshine, temperatures in the low 90s and a mild breeze. Lifeguard stands had yellow flags fluttering, meaning there was a medium hazard with "moderate surf and/or currents."

Without mandatory evacuations, the highways weren't crowded, and lines at gas stations were short.

"There have been 10 different predictions, and even though conditions are now more favorable, let's not forget what happened in 2017," said Broward County Mayor Mark Bogen, speaking at an 11:30 a.m. briefing in the county's fully staffed Emergency Operations Center in Plantation.

Bogen was referring to Hurricane Irma in 2017. South Florida was in the direct path of a Category 4 storm, only to dodge a major disaster when Irma turned at the last minute and headed up the west coast of Florida instead. There was still considerable storm damage here, including significant flooding and many days without power for a number of residents - including 12 people who died in a nursing home that wasn't equipped with a generator - but not the devastation originally predicted.

"Assume you'll lose power, assume you'll be in the dark, assume the worst," he said. "Be prepared. Be in a safe location."

Hurricane Irma was a much bigger storm than Dorian, enveloping most of the state. The prestorm warnings and evacuation orders from state officials, such as then-Gov. Rick Scott (R), prompted one of the largest mass evacuations in the country's history: 6.8 million people left their homes to find safer ground.

That caused massive traffic snarls on the state's major highways. Drivers ran out of gas on the Florida Turnpike and camped out on the side of the road.

A year after Irma, a survey by the National Hurricane Survival Initiative found that 3 in 5 Floridians would refuse to evacuate, mostly because of concerns about traffic.

DeSantis, while urging residents to "remain vigilant" in the face of Hurricane Dorian, left evacuation warnings up to local officials in the state's 67 counties.

Evacuation orders are never popular. Even evacuation suggestions irk people - as officials in the Florida Keys discovered Saturday. On Friday, when the Keys were in the cone of uncertainly, officials asked visitors to leave if they could.

On Saturday, when the new forecast showed that Dorian was no longer a threat to the islands, they reversed course.

It was good to be out of the cone, said Rhonda Holding of the Marathon Chamber of Commerce and Visitors Center.

"You'd have a better chance of getting through Dorian here than you would up north," Holding said. "It's a beautiful, sunny day. There's a nice breeze. It would be a good day for fishing or snorkeling."

The Washington Post’s Jason Samenow contributed to this report.