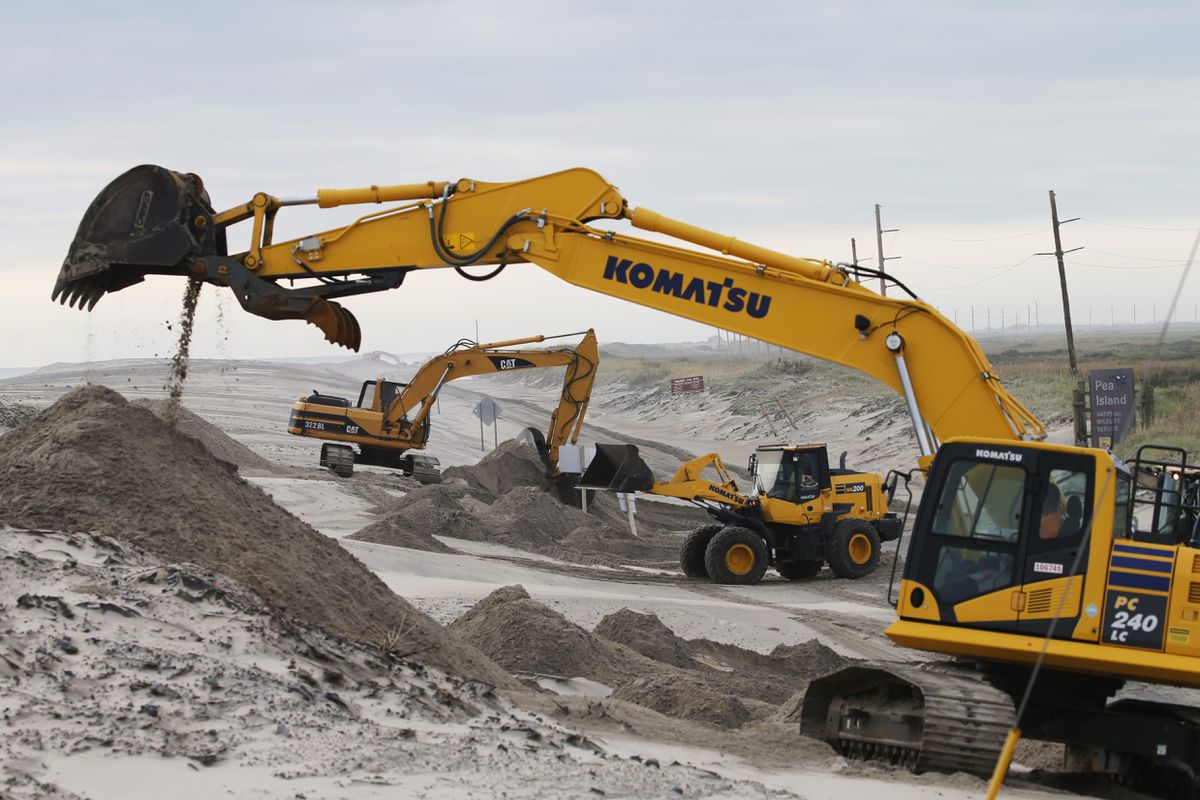 Dorian's worst damage in the U.S. appeared to be on Ocracoke Island, which even in good weather is accessible only by boat or air and is popular with tourists for its undeveloped beaches. Longtime residents who hunkered down to wait out the storm described strong but manageable winds followed by a wall of water that flooded the first floors of many homes and forced some to await rescue from their attics.

"We're used to cleaning up dead limbs and trash that's floating around," said Ocracoke Island resident and business owner Philip Howard. "But now it's everything: picnic tables, doors, lumber that's been floating around."

Howard said by phone Saturday that flooding at his properties on the North Carolina island is 13 inches higher than the levels wrought by a storm in 1944, which he said had long been considered the worst. He raised his home higher than the 1944 flood level and still got water inside.

"It's overwhelming," said Howard, who owns the Village Craftsmen, a store that sells handcrafted pottery, glass and kitchen items. He said much of the merchandise on the lower shelves is ruined. Pieces of pottery were floating around inside.

Inside his house, the floorboards were buckling and curling up after being warped by the water, he said.

Gov. Roy Cooper said about 800 people had remained on the island to wait out Dorian and it appeared to be the hardest hit. The storm made landfall Friday morning over the Outer Banks as a far weaker storm than the monster that devastated the Bahamas. Yet despite having been downgraded to a Category 1 storm, it still sent seawater surging into homes on Ocracoke, many for the first time in memory.

More than 1,100 Bahamians arrived in Palm Beach, Florida, after being evacuated by cruise ship from their hurricane-battered islands.

The Grand Celebration cruise ship returned to its home port after setting sail Thursday for Freeport, Grand Bahama, to deliver more than 112 tons of supplies and ferry dozens of health workers and emergency crews.

As it approached Canada, Dorian was again picking up strength. The National Hurricane Center in Miami said the maximum sustained winds had increased to 100 mph (155 kph) from 85 mph (140 kph), raising it to a Category 2 storm.

Forecasters said the center of Dorian was expected to move across central or eastern Nova Scotia late Saturday afternoon or early evening, pass near or over Prince Edward Island late Saturday, and then move to Newfoundland and Labrador on Sunday. Outer bands of Dorian already were producing strong winds and heavy rain in southern New Brunswick and mainland Novia Scotia. Meteorologists expected the storm to weaken to a Category 1 hurricane by the time it makes landfall.

Officials in Halifax, the Nova Scotian capital and home to 400,000 people, urged downtown businesses to close by 5 p.m.

"We do not want the citizens of Halifax roaming downtown as the water is coming in," said Erica Fleck, Halifax's assistant chief of community risk reduction.

Hurricanes in Canada are somewhat rare in part because once the storms reach colder Canadian waters, they lose their main source of energy. Hubbard said the last hurricanes to make landfall in Canada were Hurricane Igor and Hurricane Earl in September, 2010.

While tropical-storm force winds buffeted southeastern Massachusetts and could sweep into Maine later Saturday, hurricane-force winds are unlikely to pose any threat to land in the U.S.

In North Carolina, the governor said officials were aware of no serious injuries on the Outer Banks from the storm. People in need of temporary housing were being taken to a shelter on the mainland, said Cooper, who added that points farther north along the Outer Banks also received damage from Dorian. About 200 people were in shelters and 57,000 without power as of mid-day Saturday, according to the governor's office. Emergency officials transported fuel trucks, generators, food and water to Okracoke.

"We just thought it was gonna be a normal blow," Steve Harris, a semi-retired contractor, said Friday. "But the damage is going to be severe this time. This is flooding of biblical proportions."

Harris lost his car to the storm and his air conditioner is damaged, but he said he's blessed that his condominium is on the third floor and he is insured. Of the 11 units in his complex, seven had water in them, he said.

The U.S. Coast Guard began landing local law enforcement officers on the island Friday by helicopter and airlifting out the sick, elderly and others in distress, Hyde County authorities said. Officers were doing door-to-door checks and offering water and food to residents, according to the sheriff's office.

Connie Leinbach, who publishes the Ocracoke Observer newspaper, said sheriff's deputies and other rescue personnel made at least two rescues from attics. She said the Coast Guard was called in to help a man who was having problems with his oxygen.

At least four deaths in the Southeast were blamed on Dorian. All were men in Florida or North Carolina who died in falls or by electrocution while trimming trees, putting up storm shutters or otherwise getting ready for the hurricane. North Carolina's governor on Saturday urged returning residents to be vigilant, as many of the injuries and deaths from previous storms happened during the cleanup process.

As Dorian closed in, more than a quarter-million residents and visitors were ordered to evacuate the Outer Banks, which stick out from the Eastern Seaboard like the sideview mirror on a car. But many just tied down their boats, removed objects that could blow away from their yards, and hunkered down.

Dorian slammed the Bahamas at the start of the week with 185 mph (295 kph) winds, killing at least 43 people and obliterating countless homes. From there, it swept past Florida and Georgia, then sideswiped the Carolinas on Thursday, spinning off tornadoes that peeled away roofs and flipped recreational vehicles.

Still, the damage was far less than feared in many parts of the Carolinas, including historic Charleston, South Carolina, which is prone to flooding even from ordinary storms, and Wilmington, North Carolina, the state's biggest coastal city.

Ocracoke resident and restaurant owner Jason Wells said he lost three vehicles and a golf cart to floodwaters, and he has $5,000 worth of food in a freezer on an island that still lacks power. He said by text message Saturday that he and family members were already bleaching and disinfecting their houses, but he feared weeks could pass before electricity returned to most houses because of wiring problems caused by floodwaters.

"We are a close knit community. We will power on," Wells wrote. "We will persevere. We are family. Time to get to work."