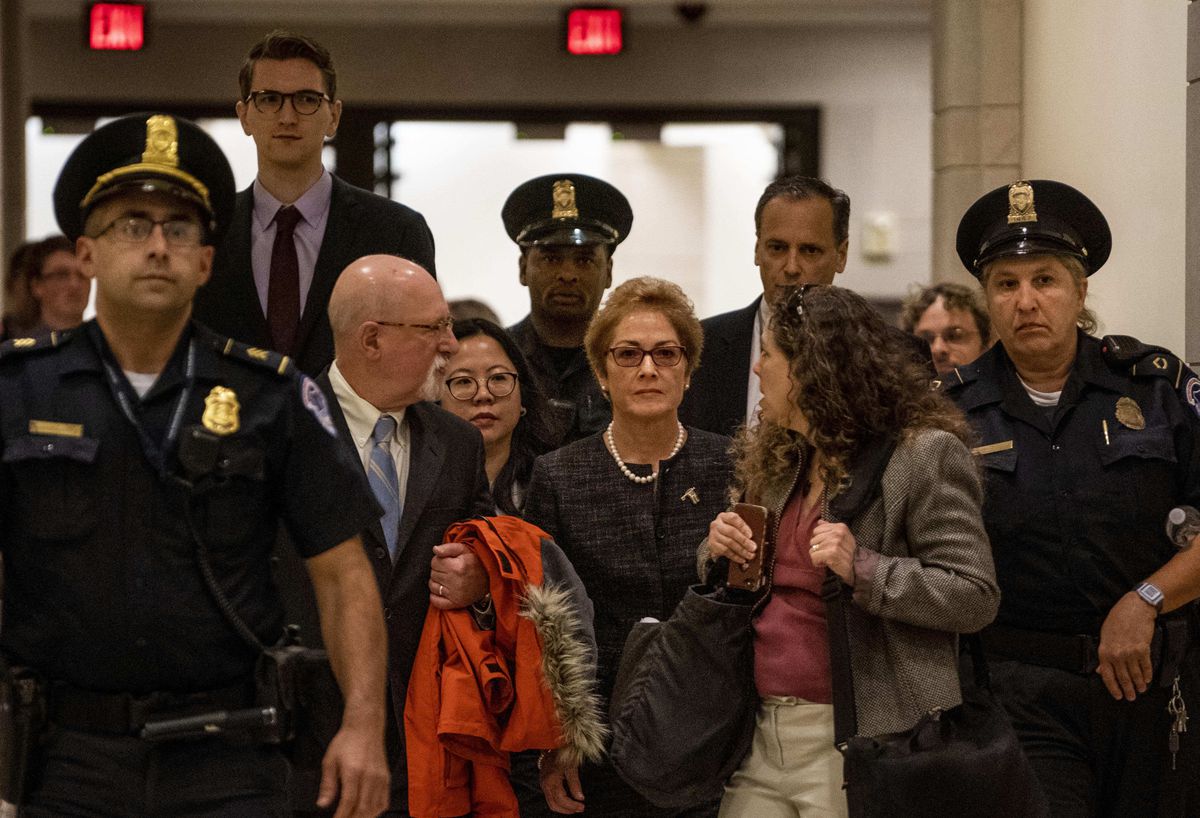 WASHINGTON - The former U.S. ambassador to Ukraine whose abrupt ouster in May has become a focus of House impeachment investigators said Friday in remarks before Congress that her departure came as a direct result of pressure President Donald Trump placed on the State Department to remove her.

The account by Marie Yovanovitch depicts a career Foreign Service officer caught in a storm of unsubstantiated allegations pushed by the president's personal attorney Rudy Giuliani and a cast of former Ukrainian officials who viewed her as a threat to their financial and political interests.

She told lawmakers that she was forced to leave Kiev on "the next plane" this spring and subsequently removed from her post, with the State Department's No. 2 official telling her that, although she had done nothing wrong, the president had lost confidence in her and the agency had been under significant pressure to remove her since the summer of 2018.

In explaining her departure, she acknowledged months of criticisms from Giuliani, who had accused her of privately badmouthing the president and seeking to protect the interests of former vice president Joe Biden and his son who served on the board of a Ukrainian energy company.

Yovanovitch denied those allegations and said she was "incredulous" that her superiors decided to remove her based on "unfounded and false claims by people with clearly questionable motives." She also took direct aim at Giuliani's associates, whom she said could have been financially threatened by her anti-corruption efforts in Ukraine.

The remarkable statements by a diplomat with more than 30 years in the Foreign Service came amid rising dissatisfaction inside the State Department at what is seen as Secretary of State Mike Pompeo's failure to defend his subordinates who have become targets in the Ukraine controversy. Michael McKinley, a career diplomat and senior adviser to Pompeo, resigned from his post this week as resentment in the building has grown.

Trump told reporters Friday that Yovanovitch may be a nice person but that Ukrainian President Volodymyr Zelensky "didn't speak favorably" about her during a July 25 phone call between the two leaders. In a rough transcript of the call released by the White House last month, it was Trump who broached the subject of Yovanovitch, telling his counterpart that she was "bad news." Zelensky responded, "I agree with you 100%."

Trump also seemed to distance himself from Giuliani when asked Friday if the former New York mayor was still his attorney. "I don't know. I haven't spoken to Rudy. . . . He has been my attorney," the president said.

Giuliani told The Washington Post that he was still Trump's lawyer, and he stood by his allegations against Yovanovitch, saying Ukrainians told him that she was "running around the streets saying not to listen to Trump." He declined to say precisely who told him that.

Pompeo dismissed criticisms that he failed to protect vulnerable U.S. diplomats, telling a journalist in Nashville on Friday that "I have their backs."

Yovanovitch’s testimony could increase calls for the president’s impeachment as she detailed her belief that under Trump’s leadership, U.S. foreign policy has been compromised by self-interested actors who have badly demoralized and depleted America’s diplomatic corps.

"Today, we see the State Department attacked and hollowed out from within," she said in prepared remarks obtained by The Post, warning that U.S. adversaries such as Russia stand to benefit "when bad actors in countries beyond Ukraine see how easy it is to use fiction and innuendo to manipulate our system."

Her opening testimony did not, however, reveal new details about Trump's pressure campaign to persuade Zelensky to investigate his political opponents. Nine hours of questioning didn't, either, because of her limited visibility of the actions Trump and Giuliani were taking behind the scenes, some Democrats said after leaving the secure room where her deposition occurred. "She wasn't on that July 25th call," said Del. Eleanor Holmes Norton, D-D.C.

At one point in her testimony, Yovanovitch grew visibly upset as she offered a "gripping and emotional account of abuse of power by the president," Rep. Sean Maloney, D-N.Y., said after walking out of the meeting. After describing the attacks and conspiracy theories raised against her, she asked for a break to compose herself, Maloney said.

According to two people familiar with her testimony, Yovanovitch did not have knowledge the plotting for her ouster directly came from Giuliani or his close associates. Yovanovitch also did not supply the panel with any documents Friday, two people familiar said - unlike former special U.S. envoy Kurt Volker, who during his testimony last week supplied the panels with copies of text messages detailing his conversations with Giuliani, a top aide to the Ukrainian president, and other diplomatic officials.

Several lawmakers stressed that Yovanovitch's testimony was significant because her attendance - under subpoena but in defiance of a State Department order not to show - represents a victory in House Democrats long-running struggle against the Trump administration to comply with summons and requests for information and testimony.

House Intelligence Committee Chairman Rep. Adam Schiff, D-Calif., praised her for being a "champion" of the rule of law abroad and at home, and for "her willingness, when served with compulsory process, to follow the law and testify."

Rep. Tom Malinowski, D-N.J., said Yovanovitch could be important if she becomes an example for other career officials to come forward and disclose wrongdoing. "I think she has set a very powerful and courageous example," he said.

Yovanovitch is one of several current and former diplomats whom the House Intelligence, Foreign Affairs and Oversight committees have identified as witnesses in their probe of whether Trump leveraged U.S. military aid and official diplomatic interaction to pressure Ukraine's president to investigate Trump's political rivals.

Additional witnesses are expected next week, including Fiona Hill, former senior director for Europe at the National Security Council; George Kent, a senior State Department official for Ukraine-related issues; and Gordon Sondland, the U.S. ambassador to the European Union.

Yovanovitch arrived on Capitol Hill with a swagger uncommon for many witnesses who have testified before the panels investigating Trump, appearing for her deposition past its scheduled start time and choosing to walk across the Capitol grounds with her legal team rather than driving up to one of the building's entrances.

According to House Democratic leaders, the State Department attempted to block Yovanovitch's testimony Thursday night, directing her not to attend the voluntary interview, in keeping with a White House letter this week stating that the administration would not cooperate with the impeachment inquiry.

The House Intelligence Committee responded with a subpoena Friday morning, panel leaders said, noting that "the illegitimate order from the Trump Administration not to cooperate has no force."

The exchange - along with an announcement earlier Friday by Sondland indicating that he would appear for a deposition under subpoena next week - suggests that House Democrats may have to issue summonses to interview government officials, particularly if doing so could jeopardize witnesses' employment. With a subpoena in hand, officials who are otherwise willing to testify can circumvent the White House's stated prohibition on cooperation with the impeachment probe.

The White House distributed talking points to congressional Republicans, saying, "We are not concerned with any information Yovanovitch might share, because the President did nothing wrong." But in a potential warning to other officials considering cooperating with the impeachment inquiry, the talking points say that because Yovanovitch did not appear with State Department lawyers counseling her about what she was permitted to say, "there is serious danger that she could breach her obligations as a current employee not to reveal such information without authorization."

"It raises serious questions," the talking points state, as to why Schiff, the Democrats' point man for the impeachment inquiry, "is willing to put career officials in such risky situations while bullying them with legally unfounded threats of obstruction charges."

Yovanovitch was expected to face questions about Lev Parnas and Igor Fruman, two Soviet-born associates of Giuliani's who were arrested Wednesday on charges of campaign finance violations. According to an indictment that federal prosecutors unsealed Thursday, the men were working for Ukrainian officials to remove Yovanovitch from her job.

Yovanovitch had made some enemies in Ukraine through her efforts to bolster the country's National Anti-Corruption Bureau, an institution launched in 2014 and aimed at fighting endemic graft and corruption. The bureau particularly angered Ukraine's recently fired prosecutor, Yuriy Lutsenko, who has accused Yovanovitch of inappropriately interfering in Ukrainian politics, though he subsequently retracted one of his most inflammatory accusations, that she provided him a "do not prosecute list."

In her testimony, Yovanovitch stressed that she never directed anyone to "refrain from investigating or prosecuting actual corruption," according to her prepared remarks.

U.S. officials who worked closely with Yovanovitch said her swift ouster stunned career diplomats who had been planning high-level internal meetings for her that were scrapped because she would no longer be serving in the position. "They fired her in the most dishonorable way imaginable," said one former State Department official who, like others, spoke on the condition of anonymity to discuss internal processes.

Pompeo did not personally notify her of her removal, officials said. That job instead went to Deputy Secretary of State John Sullivan, who Trump said Friday would be nominated as U.S. ambassador to Russia. In her prepared remarks, Yovanovitch said that Sullivan told her "I had done nothing wrong and that this was not like other situations where he had recalled ambassadors for cause."

Sullivan did not respond to a request for comment.

The House panels have issued subpoenas to the White House, Giuliani, his business associates Parnas and Fruman, and several Cabinet-level officials - including Pompeo and Energy Secretary Rick Perry, Defense Secretary Mark Esper and the acting director of the Office of Management and Budget, Russell Vought - requesting materials related to the administration's interactions with Ukraine.

Beyond Yovanovitch, the panels have recorded only one other deposition to date, with former special U.S. special envoy to Ukraine Kurt Volker, who quit his post hours after he was requested to appear for a deposition. At his session this month, Volker turned over a series of text messages he exchanged with Giuliani, a top aide to Zelensky and senior U.S. diplomats including Sondland.

Volker's text messages pertain to the weeks before and after a July 25 call between Trump and Zelensky, in which the American president asked his Ukrainian counterpart to look into the purported involvement of Ukrainians in the 2016 U.S. presidential election and the role that Joe Biden's son Hunter Biden played on the board of a Ukrainian energy company, Burisma.

Democrats have seized on how Trump asked Zelensky during their call to "do us a favor, though" when the Ukrainian president brought up the subject of military aid that had been withheld, according to the rough transcript. Democrats allege that is evidence of a quid pro quo and an abuse of office.

Zelensky won the Ukrainian presidential election in April and took office on May 20, the same day Yovanovitch was recalled.