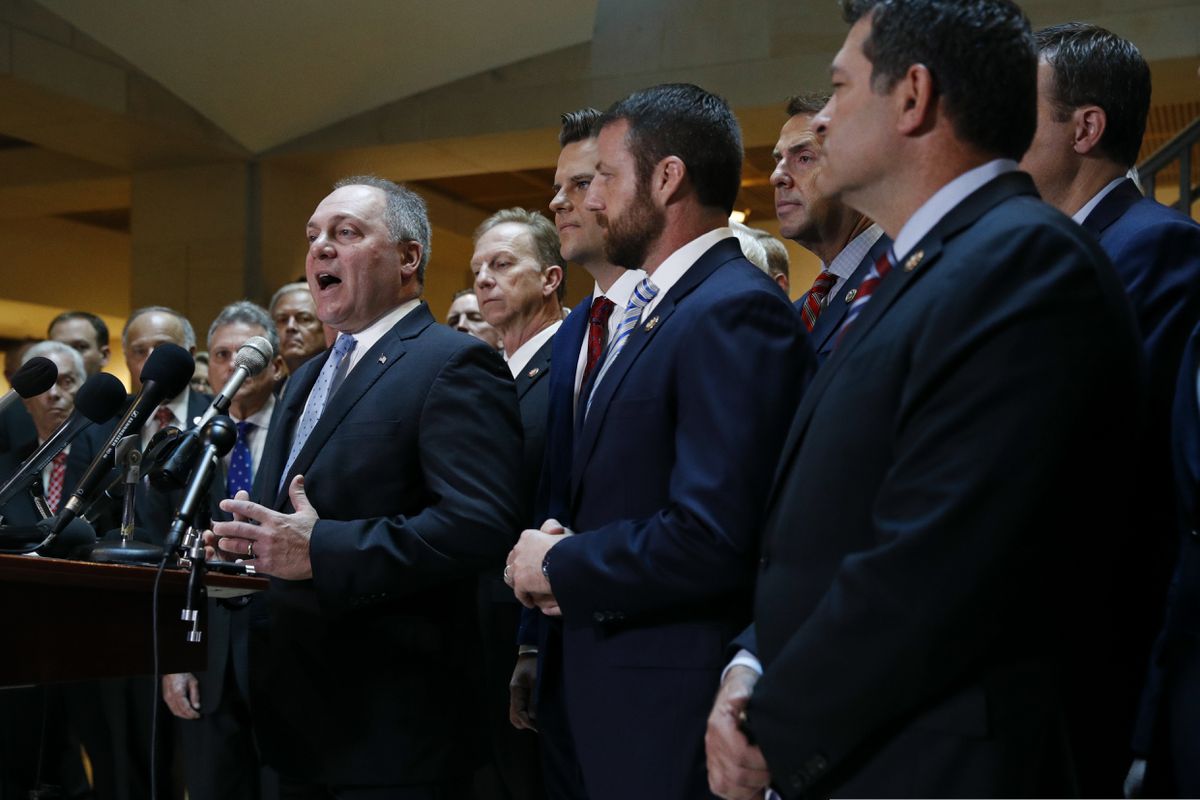 WASHINGTON - House Democrats are preparing to move their largely private impeachment inquiry onto a more public stage as soon as mid-November and are already grappling with how best to present the complex Ukraine saga to the American people.

Over the past three weeks, a parade of current and former Trump administration officials have testified behind closed doors, providing House investigators with a compelling narrative of President Donald Trump's campaign to extract political favors from Ukrainian officials. But on Wednesday, after conservative lawmakers stormed the hearing room and delayed the proceedings for five hours, some Democrats were feeling pressure to advance public hearings in hopes of avoiding further disruptions.

Among the witnesses Democrats hope to question in open session are the acting ambassador to Ukraine, William Taylor Jr., and his predecessor, former ambassador Marie Yovanovitch. Both are seasoned diplomats who, in earlier House testimony, effectively conveyed outrage over a White House plan to withhold much-needed military aid from Ukraine, a long-standing ally battling pro-Russian separatists.

In testimony Tuesday, Taylor also directly contradicted Trump's account of his interactions with Ukrainian officials, making clear that Trump demanded that President Volodymyr Zelensky order an investigation of Democratic presidential candidate Joe Biden and his family in exchange for the release of nearly $400 million in military aid and a meeting with Trump in the Oval Office.

Another top priority for many Democrats is John Bolton, Trump's former national security adviser, who made known around the White House his visceral opposition to the campaign to pressure Zelensky, a campaign directed in part by Trump's personal attorney Rudy Giuliani.

Testimony from Bolton could be particularly devastating for the White House, though it was unclear whether Democrats would subpoena him or when. After Bolton resigned last month, he told The Washington Post that he would "have my say in due course."

Democrats have long been expected to shift to public hearings, which offer the opportunity to build the case against Trump while also building support among American voters.

"It's going to be the difference between reading a dry transcript and actually hearing the story from the people who were in the room," said Rep. Jim Himes, D-Conn., a member of the House Intelligence Committee. "I think the story needs to be told, you know, the story of the abuse of power. . . . People like the various ambassadors who have come to testify need to come tell it."

The move toward the public spotlight comes as Trump and his Capitol Hill allies have cast Democrats' closed-door investigation as a secretive smear campaign against the president.

On Wednesday, House Republicans delayed impeachment proceedings for more than five hours when about two dozen of them, over Democrats’ objections, barged into a secure room where Deputy Assistant Defense Secretary Laura Cooper was set to testify about what happened to the military aid Trump ordered withheld from Ukraine for several weeks this summer.

Some Democrats are concerned that repeated protests by Republicans, similar to Wednesday's disruption, could make it impossible for them to question witnesses and could completely stop the process.

Most of the Republican insurgents are not members of the three investigative committees probing the Ukraine matter. The committee members, including dozens of Republicans, have been taking part in impeachment depositions for weeks, with the chance to cross-examine witnesses. The circuslike display was the latest attempt by Republicans to change the narrative from the substance of the allegations against Trump to their displeasure with the process.

"This is a sham proceeding, and the Democrats don't want the public to see what's going on, because they're using [impeachment] as a political weapon rather than as a tool that is provided for by the United States Constitution," said Rep. Mo Brooks, R-Ala., who participated in the protest.

Democrats argue that past impeachments have also included a closed-door investigative phase before findings are presented to the public and that the secrecy of the proceedings is necessary to preserve the integrity of the testimony, much like that of witnesses before a grand jury. At some point, Democrats expect to release transcripts of witness interviews and pull together a comprehensive report laying out their findings.

"I think everybody just needs to be patient," said Rep. Cheri Bustos, D-Ill., chairwoman of the Democratic Congressional Campaign Committee. "This is, in a sense, a grand-jury proceeding, and then whatever comes out of it, you present to the full body."

In the meantime, however, Democrats are struggling with what to do if Republicans continue to disrupt depositions. While impeachment investigators planned to collect evidence and methodically build their case by interviewing senior members of the Trump administration before moving to public action, Democrats' timeline to go public may be affected by Republican disruptions.

The chief challenges for the Democrats in going public will be finding a compelling roster of witnesses to drive home the case against the president - and making sure they do not mishandle what may be their best opportunity to sell voters on impeachment, with a message that will resonate through the rest of the 2020 election season.

Polls remain in Democrats' favor, with a majority of Americans backing Trump's removal from office. But there is also the matter of selling the case in the Republican-controlled Senate if they hope to successfully oust Trump from office - and to do that, House Democrats are acutely aware they need to make an ironclad case.

Democrats believe that they have at least two smoking guns. One is the rough transcript of Trump's July 25 phone call with Ukrainian President Volodymyr Zelensky in which he pressured the Ukrainian leader to investigate the Bidens and a conspiracy theory about the Democrats and the 2016 election. The second is acting chief of staff Mick Mulvaney's October acknowledgment of a quid pro quo.

"You have to tell the American people the story," said Rep. David Cicilline, D-R.I. "It'll be a combination of documents, a report and some live testimony. And the combination of other things will tell the American people the full story about the president of the United States using the power of his office, or abusing the power of his office, to gin up a bogus investigation against one of his political opponents."

Several Democrats expressed confidence after Taylor's testimony Tuesday that he would be an ideal public witness to lay out the narrative of how the Giuliani-led camp of Trump appointees steered Ukraine policy from U.S. national security objectives and toward delivering political favors for the president, noting that his experience and sincerity as a professional made him an ideal public voice.

Democrats argue that Yovanovitch would be a compelling witness, both for her substantive knowledge of Ukraine and her personal, emotional story of being victimized by Giuliani's actions.

Democrats are more divided about the high-ranking witnesses who have not yet been tested behind closed doors. Many are convinced that Bolton has to be part of the process, but while there is palpable excitement among Democrats about having a handpicked Trump appointee deliver potentially scathing testimony against him, that is also coupled with jitters about how to turn Bolton - who up to this point was more reviled than adored - into a star witness against the president.

Democrats don't have unlimited time to decide how to move forward. House Speaker Nancy Pelosi, D-Calif., and her leadership team still hope to hold an impeachment vote before the holidays, though increasingly Democrats are privately acknowledging the inquiry could easily drag into December. Multiple Democratic officials said they hope to finish private depositions in early November so they can use the two-week work period just before Thanksgiving to have public hearings.

First, however, Democrats have to iron out questions of process that could compromise their ability to present a united front and avoid any air of the turf disputes that dogged the House's Russia-focused investigation earlier this year. Typically, lawmakers are entitled to five minutes each to question a witness - but there are about 100 lawmakers among the three panels running the impeachment probe, far too many to accommodate in a single hearing. Democrats are also acutely concerned about creating a situation in which GOP members who joined Wednesday's protest could hijack an all-important public hearing, muddying their case.

That means leaders will all but assuredly have to take the rare step of persuading lawmakers to sideline their egos and defer management of the hearing to skilled staff lawyers, and potentially the members with prosecutorial or relevant administrative experience. That format would largely mirror the regular process for closed-door hearings, where lawyers chiefly run the questioning but members of both parties are allowed to hop in with queries of their own.

Schiff staffers, including his investigations director, Daniel Goldman, could also do some of the Democrats' questioning. Goldman boasts experience in the office of the U.S. attorney for the Southern District of New York prosecuting Russian organized-crime networks.

But others are less sure about who else would sit on the dais.

One Democrat suggested it was possible that different committees would take the lead on witnesses, depending on which has jurisdiction over the topic. The House Foreign Affairs and Oversight committees have been working in partnership with the House Intelligence Committee on the impeachment inquiry since it commenced with a focus on Ukraine.

There is also a question about whether members should have any opportunity to pose questions in public, with some arguing not only that staff lawyers would stand the best chance of eliciting answers but that it is important to keep the focus on the witnesses. Some lawmakers pointed to how Judiciary Committee counsel Barry Berke was successful in pinning down a combative Corey Lewandowski, Trump's former campaign manager, during a September hearing that was otherwise widely panned.

"There is an advantage to having counsel take the lead in questioning, because you have an uninterrupted thread of questioning," said Rep. Gerald Connolly, D-Va. "Five minutes each is very truncated, and frankly the personal dictates of a member may or may not interrupt the flow."

But Connolly added, "On the other hand, our folks back home want to see that we're doing something, and being at a hearing silent is a frustrating experience for us and for our constituents back home."

Other Democrats were not torn at all. Rep. Gregory Meeks, D-N.Y., said staffers should absolutely take the lead, as they have done in the private depositions. "That way it is as consistent and serious and no one can say anyone is playing politics," he said.

Rep. John Garamendi, D-Calif., agreed, arguing that questioning witnesses is "a very special skill, and frankly it requires a lot of preparation."

The Washington Post’s Elise Viebeck contributed to this report.