Teens are accused of pushing a log off a cliff and killing a woman below. They could be tried for murder. 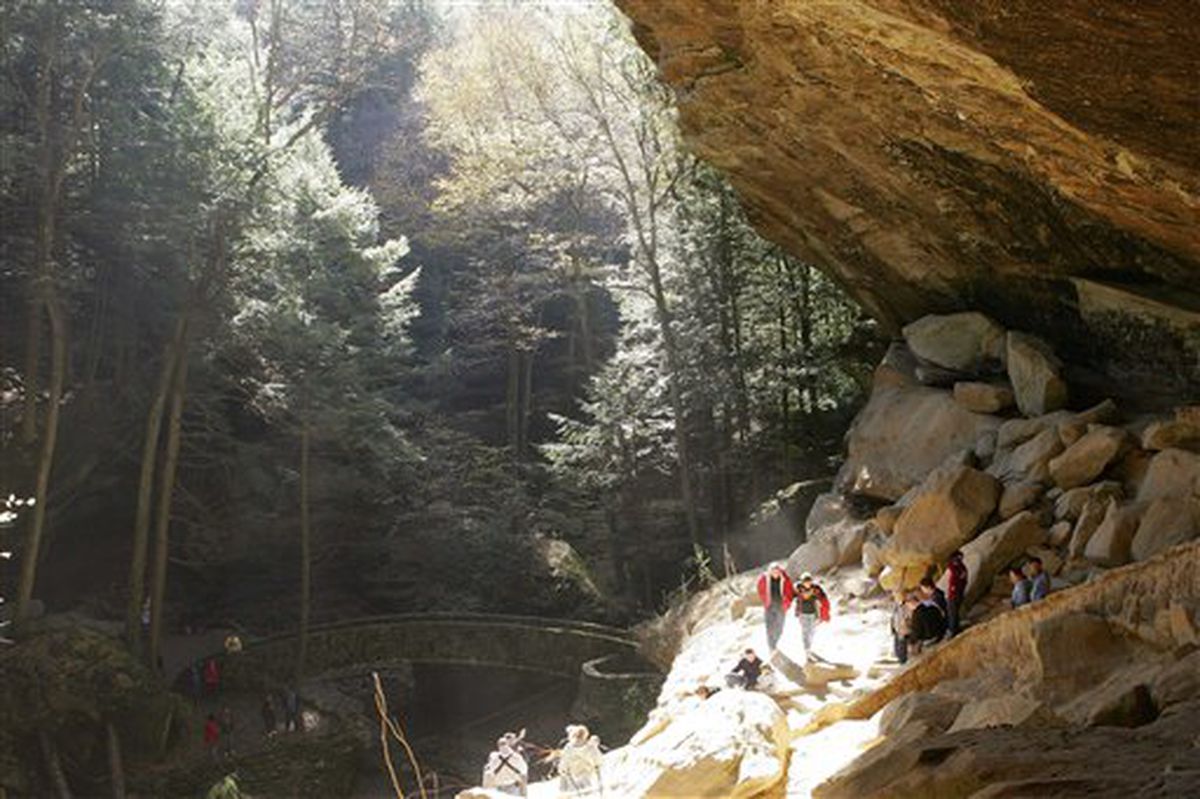 The log struck the 44-year-old mother of four. She died at the scene.

For a month after the Labor Day tragedy, her friends and family begged for information from anyone who had been near Old Man's Cave that day, a picture-perfect spot for hikers in the park where Schafer had been photographing teens. Authorities had determined that the log did not fall naturally, and witnesses told investigators they saw kids on the cliff where the log fell from.

A $10,000 reward was offered to anyone with information leading to conviction.

Nobody came forward, and how the log fell remained a mystery.

Then, on Oct. 10, the Hocking County Sheriff's Office announced it finally had answers. The log did not fall. It was pushed, authorities said, and two 16-year-old boys were responsible.

The teens were arrested and charged with reckless homicide in juvenile court.

Now their charges have been upgraded to murder.

Hocking County Juvenile Court Judge Jonah Saving ruled in probable cause hearings Tuesday that the two teens, who live in Logan, Ohio, can be tried as adults.

In addition to the murder charges, the teens also face charges of involuntary manslaughter and felony assault, reported the Chillicothe Gazette. Their bond was set at $100,000.

Posted by Friends of Victoria Schafer on Saturday, September 14, 2019

The two had separate hearings in which prosecutors argued that the teens knowingly and willfully pushed the log over the cliff, aware of the harm it could cause. The judge agreed that there was probable cause to support the new charges.

"It was Labor Day, and the park was busy, which satisfies the 'knowing' portion of the offense," Saving said, reported the Gazette.

But the teens' attorneys are arguing the opposite, claiming that they did not set out to hurt, or kill, anyone.

"It's an accident and a terrible one," Bob Toy, one teen's attorney, told The Washington Post in an interview. "There's no knowing intent to do harm."

The other teen's attorney, Ryan Shepler, did not respond to a request for comment from The Post but told the Gazette that he does not believe "knowing" the park was busy is the same as "knowingly" killing Schafer.

Officials with the sheriff's office and the Ohio Department of Natural Resources testified at the hearings Tuesday that the log had been removed from a pile more than 40 feet from the edge of the cliff, reported the Gazette.

Miranda Spencer, a friend of the teen boys who was at the park with them the day Schafer was killed, testified during both hearings. In the first hearing for one of the teens, Spencer said that she could not remember who pushed the log over the edge.

But in a later hearing, after Toy refreshed her memory with transcripts of her previous interviews with police, Spencer testified she did know which teen physically threw the log off the cliff.

Spencer told the court that one teen told the other there was nobody below them, though she had told them not to throw the log at all. They did it, she said, "to be funny."

"I know Jaden," Spencer testified, according to the Gazette. "I don't believe that he would ever intentionally hurt someone."

Benjamin Fickel, Hocking County prosecutor, told ABC 6 that it does not matter who actually threw the log, “because of what we know so far is that they both participated.”

Authorities were tipped off to the teenager’s involvement in Schafer’s death when a mother of a local high school student called the tip line to report that one of the teenage suspects sent a text message saying that “he had done something serious at the park with another kid,” Hocking County assistant prosecutor Jorden Meadows told the Parkersburg News and Sentinel in West Virginia in October. A short time later, the boys confessed, she said.

“With their lack of remorse, we felt we needed to send a message,” Meadows said in an interview with the Columbus Dispatch after authorities decided to pursue murder charges later that month. “We’ve seen too many deaths out of the caves.”

The case will be reviewed by a grand jury on Friday, and if they issue an indictment, then the teens will appear in court next week before a new judge in adult court. A trial will follow.

Toy said Schafer was a "lovely woman" who was "tragically killed."

"But nobody intended to do it," he said. "Nobody."

Victoria loved photography, but she loved her family even more. She cherished her four children and her husband, Fritz....

Posted by Friends of Victoria Schafer on Wednesday, October 2, 2019

Schafer, who worked as a human resources professional at a pet-store operator, had started her own photography business several years ago, capturing everything from underwater photos to sports and school portraits. She and her husband of 21 years, Fritz, were raising four teenagers between the ages of 13 and 19 at the time of her death. Maddie, 16, had learned of her mother’s fatal injury from classmates who called to tell her what happened at the park, Schafer’s sister, Catherine Muth, told reporters at a news conference last month. The oldest, 19-year-old John, received the call from his father.

"One thing I know to be true is this: Victoria would simply want the result of all this to be increased safety and awareness at all parks; she'd never have wanted to put these kids' lives - or any other person's life - in danger," her friends and family wrote after the tragedy on the page "Friends of Victoria Schafer."

John Schafer told the Daily News that if his mother's death was the result of a bad decision by two teenagers, he would attend their court hearings to urge the judge not to levy a punishment that would ruin their lives.

"If there's anybody that understands teenagers making mistakes, it's my mom and me," he said. "If it was truly just some kids that didn't know any better or were just being stupid kids, and not anything more than that, I think my mom would understand."

The "Friends of Victoria Schafer" page has not posted on the recent developments in the case.

Schafer's sister, Catherine Muth, released a statement in late October after prosecutors announced they would be pursuing murder charges in adult court.

“While nothing will bring Victoria back, our family is grateful to finally begin to have the answers we have been seeking and to have a better understanding of the actions of others which led to her tragic death,” Muth said in the statement obtained by the Columbus Dispatch. “It is our hope that the information learned will prevent another family from ever experiencing a similar tragedy.”