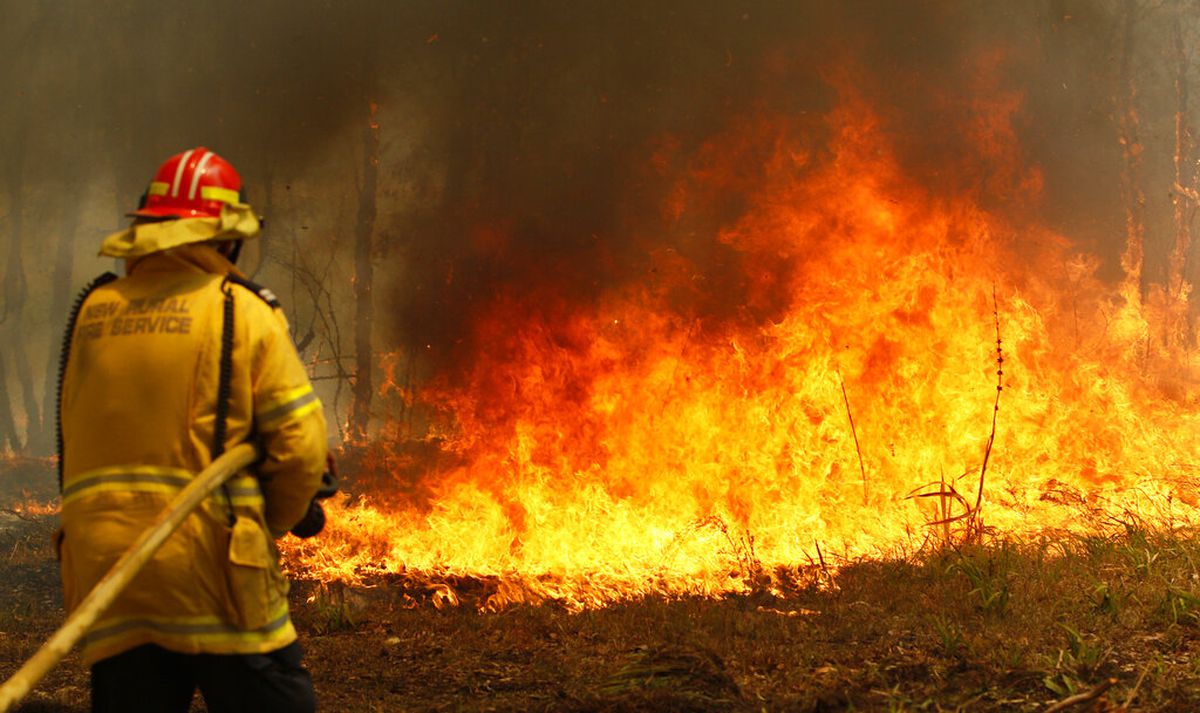 On Tuesday, millions of Australians in and around Sydney all the way north to the Gold Coast face the highest wildfire risk predicted for the region, as an outbreak of deadly bush fires continues to scorch more than a million acres of the unusually hot and drought-stricken country.

A state of emergency is in effect for all of the state of New South Wales for Tuesday as bush fires rage on.

Complicating matters in the Sydney region will be hot temperatures and winds from the northwest for part of Tuesday, before a "Southerly Buster" moves through as a cold front sweeps in from south to north, shifting winds and causing them to crank up to potentially damaging levels of 50 mph. Any bush fires would then shift their movement and could spread quickly and across large distances, raising the risks of hasty evacuations from extraordinarily rapid fire spread. Temperatures are forecast to get into the upper 90s, or upper 30s Celsius before the cold front moves through.

Conditions in New South Wales on Tuesday are being compared to one of the darkest days in Australia bush fire history, known as "Black Saturday," when an outbreak of bush fires killed 173 in Victoria, and destroyed more than 2,000 homes in February, 2009.

In this bush fire outbreak, three people have been killed, and hundreds of structures lost in New South Wales and Queensland.

Hundreds of schools are expected to close preemptively due to the fire risk, according to Australian media reports. Air quality is predicted to be poor in the Sydney area on Tuesday, as smoke from nearby fires carries a dangerously high amount of fine particulate matter into the region. These particles can get lodged in peoples' lungs, where they can aggravate asthma and lead to other health concerns, particularly among the ill, very young, and elderly populations.

Rural Fire Service deputy commissioner Rob Rogers told reporters that the situation is as bad as any he's ever seen, or imagined.

"I've got to tell you, I've been in this industry for 40 years and I have not seen a scenario like this before, I really haven't," Rogers said, according to the Sydney Morning Herald. "If someone came to me and said 'let's do one of the scenario role-plays,' I would be saying, 'lets try to keep this a bit more realistic' ... you just would not expect it."

Firefighters were urging people in risky areas - such as close to the so-called wildland-urban interface where homes and farms jut up against forested areas, to evacuate preemptively since they could not promise enough firefighting assets to dispatch them to every home, farm or office in danger.

The fires are sparking political battles over the role that climate change may be playing in the bush fire crisis. Prime Minister Scott Morrison, who has championed Australia's coal industry and carved out a more contrarian position on climate change, has downplayed any ties to climate change, while environmentalists and opposition parties who contend these fires are in part the consequence of global warming. Australia is one of the world's top coal producers.

However, in the climate research literature, the links between a warming climate and increased bush fire risk in Australia are robust and uncontroversial. The scientific evidence shows clear links between trends in Australian climate and fire danger over time the likelihood of an escalation in fire risk in years to come, although natural climate variability, such as El Niño and other cycles, as well as development patterns play a role as well.

According to a comprehensive 2015 federal climate report, the ongoing bush fires are burning in places in areas of Australia that are likely to see an uptick in the average forest fire danger index and the number of days with severe fire danger. The study pinned these trends on human-caused climate change, in large part because a warming climate can dry out vegetation faster, worsening the influence of droughts.

Studies published since have also warned that one of the clearest findings of climate research is that the fire season will lengthen in large parts of Australia, and that conditions will become more conducive to severe fires as the climate warms and vegetation dries out faster and more extensively.

Australia's fire danger has increased since 1950 across most of the eastern part of the country, the Bureau of Meteorology has found. These trends include areas of southeastern Queensland and parts of northeastern New South Wales, and capture an increase in the frequency and severity of dangerous fire weather.

"Trends towards a lengthened fire season have already been discerned in some areas of the country, with the fire season typically starting earlier in the year in southern Queensland, inland and southern New South Wales, and Victoria," the bureau stated.

The United States is also grappling with the ramifications of climate change when it comes to wildfires, particularly in the West, as spring snow cover melts away earlier in the year, and summers become hotter and drier, particularly in California.

In Australia, winter and spring rainfall was well below average across parts of the country. This is a trend that is related to a predominantly natural climate cycle known as the Indian Ocean Dipole, which involves a pattern of air and moisture transport across the Indian Ocean.

Many locations in coastal New South Wales, for example, saw January to August rainfall totals that were 50% below average, according to the BOM. In some places, drier than average weather dates back to 2017.

A positive Indian Ocean Dipole the past two years has meant drier-than-average conditions in much of Australia, and El Niño, which was present for part of the period between 2017 to 2019, also influenced precipitation patterns. The BOM found that it's unusual to have back-to-back years with a positive dipole pattern, which helps dictate precipitation patterns across South Asia and Oceania.

A positive Indian Ocean Dipole (IOD) occurs when the water is cooler than average off the coast of Sumatra in Indonesia, leading to reduced atmospheric lift there and reduced rainfall over Australia. At the same time, positive Dipole events feature warmer-than-average waters off the coast of Africa, which enhances atmospheric lift and leads to above average rainfall there.

Importantly, this climate cycle, along with El Niño, is evolving as ocean and air temperatures increase in response to growing amounts of greenhouse gases in the air due to human activities, namely the burning of fossil fuels, such as coal, for energy.

Climate trends in Australia show sharp warming and an increase in extreme events. Last summer, for example, was the country’s hottest on record, and the BOM found that climate change exacerbated extreme heat events as well as droughts during the year.