‘Four embassies’: The anatomy of Trump’s unfounded claim about Iran 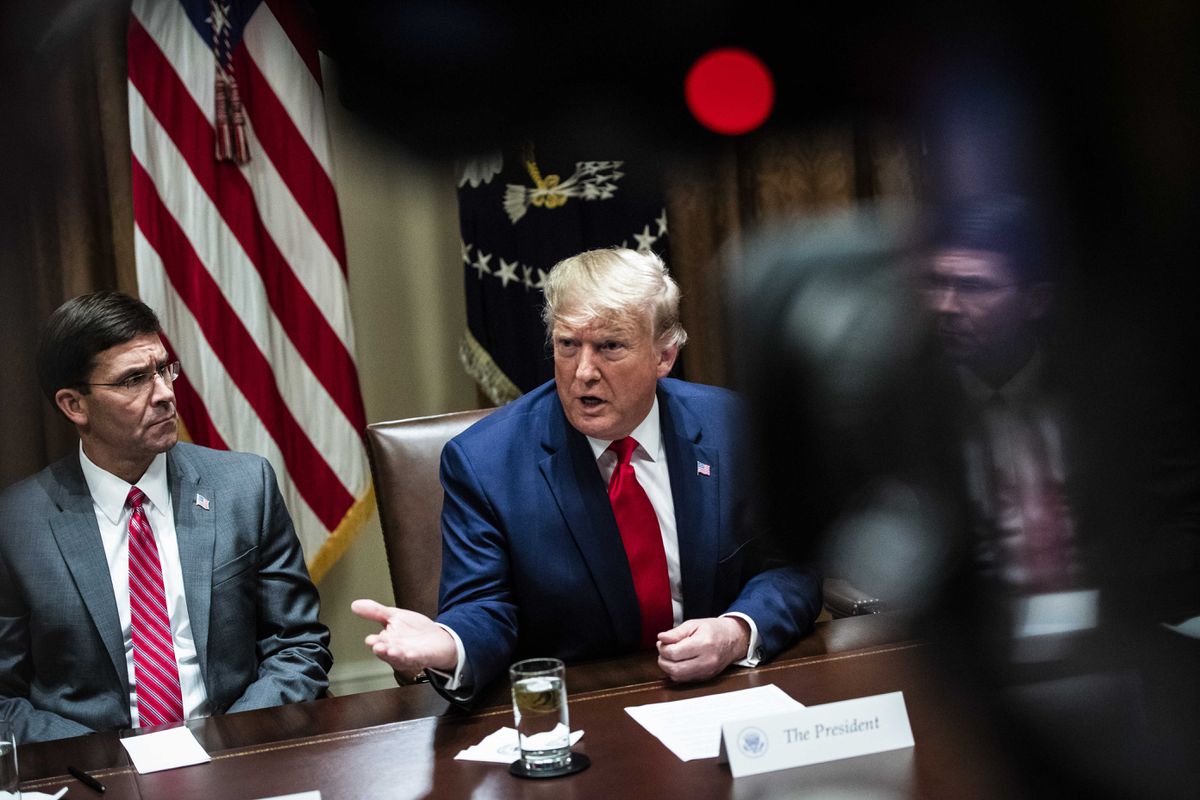 WASHINGTON - The theory was born last Thursday in the Roosevelt Room of the White House, where President Donald Trump stood before men in hard hats and orange construction vests for an environmental announcement and offered a fresh rationale for his controversial order to kill a top Iranian general.

"They were looking to blow up our embassy," Trump said, referring to the heavily-secured Baghdad facility that had become a magnet for protesters.

Later that night, at a raucous campaign rally in Ohio, Trump added to his story. The Iranians, he claimed, were not only planning to attack the U.S. Embassy in Iraq, but also an undisclosed number of embassies in other countries.

And then Trump fleshed out his claim even further. "I can reveal I believe it probably would've been four embassies," he said in an interview Friday with Fox News Channel.

Based on what is known so far, Trump's statement was at best an unfounded theory and at worst a falsehood. At each turn in the commander in chief's rapidly-evolving narrative of why he authorized the Jan. 3 drone strike that killed Iranian Major Gen. Qasem Soleimani, the machinery of government scrambled to adapt and respond.

The result is a credibility crisis for an administration that has long struggled to communicate factual information to the public. At a perilous moment for the nation's security, with the United States at the brink of war with Iran, Trump is unable to rely on trustworthiness to justify his decision to take out Soleimani, both because of his lengthy record of exaggerations and lies and because of his ever-shifting rationales.

In a rare public break with the president, Defense Secretary Mark Esper acknowledged Sunday on CBS's "Face the Nation" that he had not reviewed any such evidence of a plot to attack four U.S. embassies as Trump had suggested. Though he did not directly contradict Trump, Esper's assessment was at odds with that of the president.

Inside the Pentagon and elsewhere in the government, there was skepticism about the president's claim, as well as about Secretary of State Mike Pompeo's statement that the threat from Soleimani was "imminent" and that hundreds of American lives were at risk. One senior administration official said the remarks from both men were unnecessary distractions from what many officials believed was a defensible policy decision.

Almost immediately, other U.S. officials said privately that Pompeo was overstating the intelligence, portraying it as specific enough to say when the strike was going to happen.

U.S. officials, some of whom spoke on the condition of anonymity to describe sensitive intelligence, have said that Trump administration officials believed that Soleimani intended to escalate hostilities toward U.S. interests in the Middle East, to include possible attacks on diplomatic and military facilities.

This "stream" of intelligence, however, was not so specific that it let officials know when and where Soleimani intended to strike, officials said.

Despite Trump's claim that the U.S. Embassy in Baghdad was one of four facilities under attack, some embassy officials there said they did not receive an alert commensurate to the threat Trump described, said people familiar with the situation, who were not authorized to comment publicly.

When officials in Washington or in a diplomatic outpost receive specific credible information about threats to an embassy, warnings are typically sent to the U.S. personnel in the post to be vigilant and take precautions.

"If they had knowledge of an imminent threat, then you would've expected them to notify people," said Ronald Neumann, the president of the American Academy of Diplomacy and a retired career Foreign Service officer.

Following the killing of Soleimani and Iran's public vows to take vengeance, U.S. personnel in the region were on edge and asking questions to colleagues about information related to emerging threats. Some who never received any information about such specific threats were angered and confused when Trump later claimed that the Baghdad embassy would have been attacked, when they had received no such information, said the people familiar with the situation.

Pompeo pushed back Monday against the charge that a notification was not sent, but he did not specify when or how it was transmitted.

"They were not only notified but we took extensive action to do everything we could that they were safe and secure," Pompeo said on Fox News.

A State Department spokesman said Washington sent out a "worldwide security warning to every embassy alerting them of potential escalation with Iran," but did not say when that alert was sent.

The spokesman said that after the U.S. military killed two dozen members of an Iranian-backed militia in Iraq and Syria on Dec. 29, "every" regional security officer "and embassy in the region knew of the potential escalation threat that could be imposed on them."

But there is no indication that embassy employees were warned of a credible threat to the embassy, and the State Department did not respond to questions about whether the embassy in Baghdad took other measures that are typical when a specific threat is uncovered.

Even if evidence of Trump's claim exists, there was no interagency process or decision made to release such information or for the president to say what he said, according to a senior administration official who spoke on the condition of anonymity to candidly discuss sensitive matters.

Attorney General William Barr was the latest to weigh in on the intelligence Monday and portrayed it as alarming but also general in nature.

"I'm not going to get into the specific intelligence. I believe there was intelligence of imminent attack," Barr said, noting that he was consulted before the strike. "But I do believe that this concept of imminence is something of a red herring. I think when you're dealing with a situation where you already have attacks underway, you have a campaign that involves repeated attacks on American targets, I don't think there's a requirement, frankly, for, you know, knowing the exact time and place of the next attack."

Trump tweeted Monday that "the future attack" by Soleimani was imminent - "but it doesn't really matter because of his horrible past!"

Esper and O'Brien have described the intelligence about Soleimani's plotting as "exquisite," a term of art that implies specific knowledge about Soleimani's intentions. The term exquisite is often used to describe satellites and other technical collection methods designed to intercept a target's communications or track his movements.

Esper said this intelligence was only shared with a handful of lawmakers, known as the Gang of Eight, who are routinely privy to highly-classified and sensitive intelligence that is not shared with all members of Congress.

O'Brien, appearing on NBC's "Meet the Press," also described the intelligence as "exquisite," but he broadened the aperture of the threat beyond embassies.

"The intelligence showed that they were looking at U.S. facilities throughout the region, and that they wanted to inflict casualties on American soldiers, sailors, airmen, Marines, as well as diplomats," he said.

O'Brien spoke of the intelligence as a "stream" that had to be restricted to a small number of people. "I'd love to have the intelligence out there now," he said. ". . . But the president's interpretation of that intelligence is very consistent with it."

Subtly, the national security adviser was acknowledging what other U.S. officials have privately said about Trump's statements: The president is giving his opinion about the intelligence, which doesn't necessarily match that of the intelligence community or individual analysts in the government.

A former senior White House official offered another possibility: that one of Trump's advisers speculated about possible attacks on embassies in a briefing with the president.

"I don't believe he would have simply, out of thin air, came up with that unless he was actually told something like that," said the former official. "I'm sure someone told him that that was a possibility, and that stuck in his head."

Added John McLaughlin, a former acting CIA director, "It's not inconsistent with [Trump's] record of making something up when he doesn't have the specifics."

Opinions aside, some lawmakers have said that what limited information the administration has shared has not made the case for a military strike.

"There was no discussion in the Gang of Eight briefings that these are the four embassies that are being targeted, and we have exquisite intelligence that shows these are the specific targets," House Intelligence Committee Chairman Adam Schiff, D-Calif., said on "Face the Nation." Therefore, Schiff suggested, "when you hear the president out there on Fox, he is fudging the intelligence."

Officials have also spent recent days trying to temper expectations now that Soliemani is dead. Killing the Iranian general, some said, may have disrupted his current plotting, but it didn't eliminate the threat.

When CIA Director Gina Haspel was asked to weigh in on a potential strike on Soleimani, she did not expressly advocate for it. Rather, Haspel said the risk of not acting was greater than the risk of acting, officials familiar with her remarks have said.

At the root of Trump's claim about four embassies is his obsession with avoiding a repeat of the 2011 attack on a diplomatic compound in Benghazi, Libya, as he watched protesters swarm the U.S. Embassy in Baghdad late last month.

Trump asked about embassy security on several occasions, according to a senior administration official, and has been determined to make sure no embassy was compromised and has wanted the military to take out anyone who broached one.

“This was the anti-Benghazi,” Trump crowed before his rally crowd in Toledo last week. “We did it exactly the opposite of Benghazi, where they got there so late. All they saw when they got there days later were burning embers from days before. It’s all they saw. We got there very early. We saw what was happening. I saw what was happening. I said what’s that all about? And that was going to be another Benghazi had they broken through the final panels of glass.”