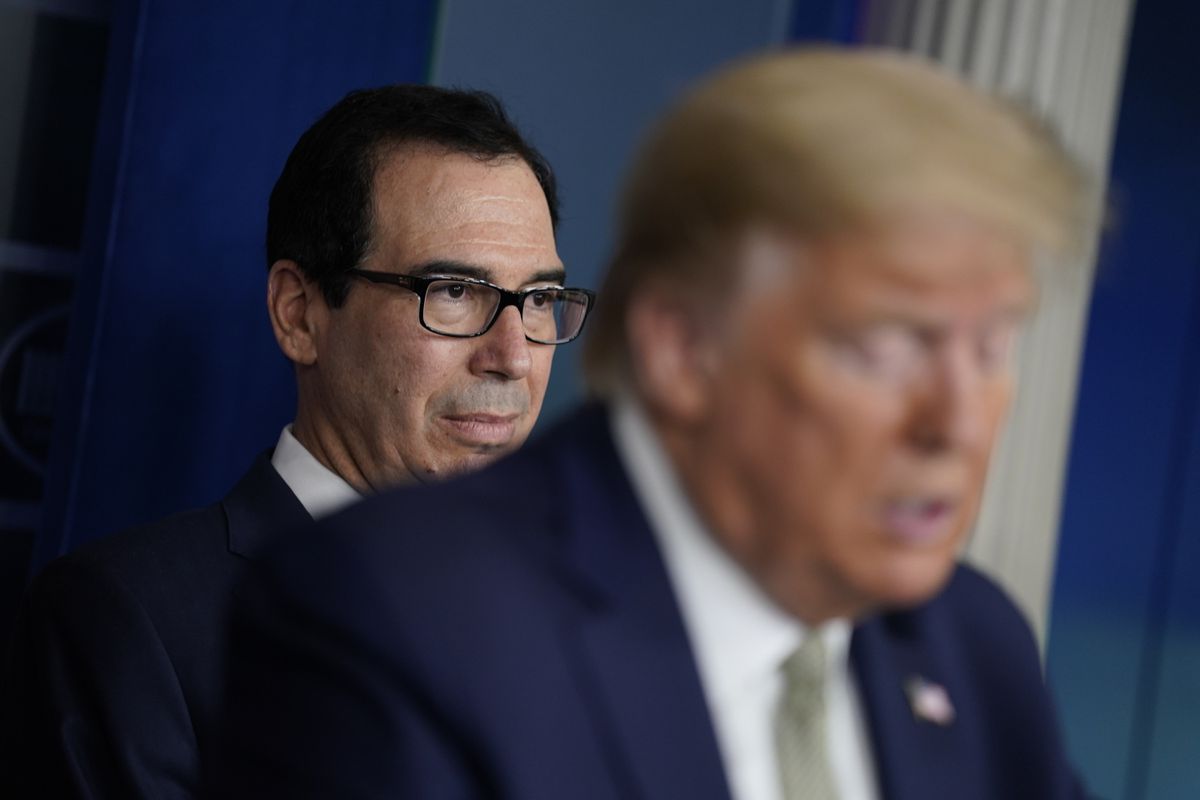 WASHINGTON — In a massive federal effort Tuesday, President Donald Trump asked Congress to speed emergency checks to Americans, enlisted the military for MASH-like hospitals and implored ordinary people — particularly socially active millennials — to do their part by staying home to stop the spread of the coronavirus.

His proposed economic package alone could approach $1 trillion, a rescue initiative not seen since the Great Recession. Trump wants checks sent to the public within two weeks and is urging Congress to pass the eye-popping stimulus package in a matter of days.

As analysts warn the country is surely entering a recession, the government is grappling with an enormous political undertaking with echoes of the 2008 financial crisis.

At the Capitol, Senate Majority Leader Mitch McConnell vowed the Senate would not adjourn until the work was done.

“Obviously, we need to act,” McConnell said. "We're not leaving town until we have constructed and passed another bill."

But first, McConnell said, the Senate will vote on the House’s $100 billion package of sick pay, emergency food and free testing, putting it back on track for Trump’s signature — despite Republican objections. “Gag, and vote for it anyway,” he advised colleagues.

It was a signal of what the GOP leader called the “herculean” task ahead.

[How Anchorage-area businesses and organizations are dealing with coronavirus]

Senators gathered at an otherwise shut-down Capitol as Americans across the country were implored to heed advice and avoid crowds. Young adults, in particular, are being urged to quit going out because even seemingly healthy people can be spreading the virus that causes the COVID-19 illness.

Even so, presidential primary elections unfolded in Florida, Illinois and Arizona. Ohio's was called off hours before the polls were set to open.

After a savage drop at the start of the week, the stock market rose as Trump and aides sketched out elements of the economic rescue package at a briefing. Economists doubted that would be enough to stop millions of jobs losses, even if in the short term.

Bigger than the $700 billion 2008 bank bailout or the nearly $800 billion 2009 recovery act, the White House proposal aims to provide a massive tax cut for wage-earners, $50 billion for the airline industry and $250 billion for small businesses. Two people familiar with he package described it to The Associated Press on the condition of anonymity because they weren't authorized to speak publicly.

The amount that would be sent out in checks Americans is not yet disclosed. The White House said it liked GOP Sen. Mitt Romney's idea for $1,000 checks, though not necessarily at that sum and not for wealthier people.

“This is a very unique situation," said Treasury Secretary Steve Mnuchin, exiting a private briefing of Senate Republicans. "We've put a proposal on that table that would attract a trillion dollars into the economy."

One GOP leader, Sen. John Thune of South Dakota, told reporters afterward it "could be" up to $1 trillion.

Senate Democrats produced their own $750 billion proposal, which includes $400 billion to shore up hospitals and other emergency operations in response to the global pandemic and $350 billion to bolster the safety net with unemployment checks and other aid to Americans.

“The aid has to be workers first," said Senate Minority Leader Chuck Schumer, not what happened in 2008, when the big banks took precedence. Schumer also said it's time to call out the National Guard to provide security as communities reel from the crisis.

The slow-moving Congress is being asked to approve the far-reaching economic rescue as it tries to rise to the occasion of these fast times.

A roster of America's big and small industries — airlines, hotels, retailers and even casinos — lined up for hoped-for aid.

Still, health officials are urging Americans to stay home to prevent an onslaught of cases that could overwhelm hospitals as happened in Italy, among the countries hardest hit.

As Congress considered aid, the Pentagon on Tuesday said it would provide five million respirator masks and 2,000 specialized ventilators to federal health authorities. And Medicare was immediately expanding coverage for telemedicine nationwide to help seniors with health problems stay home to avoid infection.

More than two dozen Senate Democrats urged Trump to invoke the Korean War-era Defense Production Act to increase production of masks, ventilators and respirators, as well as expand hospital capacity to combat the coronavirus. Federal officials said the administration is working with the Army Corps of Engineers to see about erecting temporary hospitals, as is done in the military, to handle an expected surge of cases.

Schumer compared the government response needed to a wartime mobilization.

House Speaker Nancy Pelosi, who marshaled the earlier package through a bipartisan vote last week, fielded a call from Mnuchin on Tuesday morning and another from Federal Reserve Chairman Jerome Powell in the afternoon, encouraged by the Fed chairman’s perspective that Congress could think big with interest rates at nearly zero.

In the call with Mnuchin, she and Rep. Peter DeFazio, D-Ore., chairman of the House Transportation committee, “emphasized that protecting workers' paychecks and benefits was their top priority, and that immediate action was needed,” said Pelosi spokesman Drew Hammill on Twitter.

The debate is sure to revive the sharp divisions over the costly bank bailout and economic recovery of the Obama and Bush eras.

Much about the proposed checks is not known, such as whether the amount would vary by the income of the recipient or whether everyone would get the same sum. Mnuchin said “it's clear we don't need to send people who make $1 million a year checks, OK?”

Economists from both parties endorsed mailing checks of at least $1,000 to all American households as the quickest way to offset the sharp slowdown in economic activity.

"We need to pay people to stay at home," said Heidi Shierholz, a senior policy analyst at the Economic Policy Institute, a liberal think-tank. The group predicted that without a huge stimulus package, the U.S. economy could lose three million jobs by this summer.

Still, some GOP senators were skeptical about the massive aid on the table. “I’m going to be very leery of doing something like in 2008,” said Indiana Republican Sen. Mike Braun.

Angry senators from both parties, who were sent home when McConnell adjourned for the weekend, returned to a changed Washington, as Trump declared a state of emergency, the virus spread and the economy recoiled.

House lawmakers passed their bipartisan legislation and won't be recalled until a new bill is ready.

Despite federal guidelines against so many people gathering, senators had no choice but to convene. Legislating cannot be done from home.