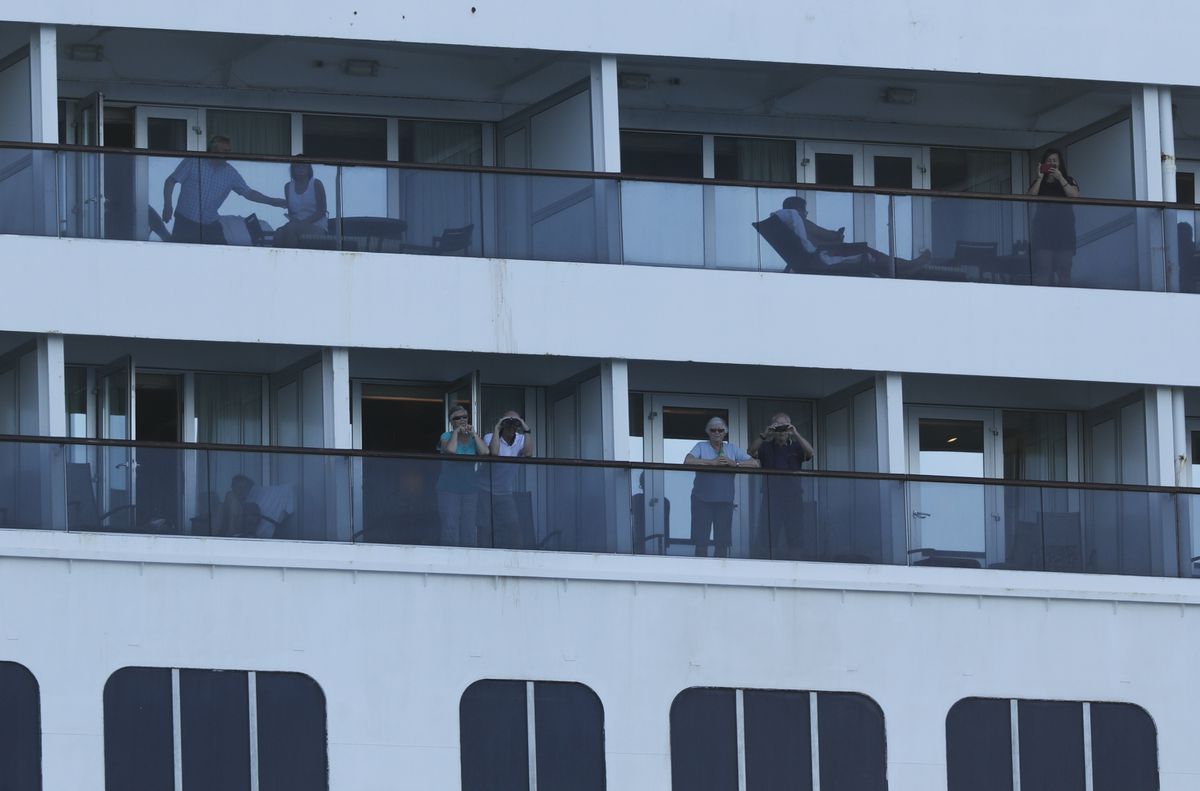 Passengers look out from the Zaandam cruise ship, anchored in the bay of Panama City, Friday, March 27, 2020. Several passengers have died aboard the cruise ship and a few people aboard the ship have tested positive for the new coronavirus, the cruise line said Friday, with hundreds of passengers unsure how long they will remain at sea. (AP Photo/Arnulfo Franco)

Passengers look out from the Zaandam cruise ship, anchored in the bay of Panama City, Friday, March 27, 2020. Several passengers have died aboard the cruise ship and a few people aboard the ship have tested positive for the new coronavirus, the cruise line said Friday, with hundreds of passengers unsure how long they will remain at sea. (AP Photo/Arnulfo Franco)

FORT LAUDERDALE, Fla. -- A Holland America cruise ship, carrying four bodies and scores of patients with coronavirus-like symptoms, has been given permission to cross the Panama Canal, allowing them to continue their journey toward Florida, the cruise line’s president said Sunday.

The Zandaam and Rotterdam, where some passengers were transferred, may be heading to Fort Lauderdale or Miami.

But Gov. Ron DeSantis appeared on Fox News on Monday morning -- and he wasn’t happy.

"We cannot afford to have people who are not even Floridians dumped into South Florida using up those valuable resources," he said, adding he is in touch with the White House over the fate of these ships. "We view this as a big, big problem and we don't want to see people dumped in southern Florida right now."

Both ships had crossed the canal by Monday morning.

"We recently received confirmation from the Panamanian government that both ships have been allowed access to Panama Canal to make our way east toward Florida," Holland America president Orlando Ashford said in a video shown to passengers and crew on Sunday night.

Valerie Myntti and her husband remained locked in their rooms Sunday, unable to leave the Zandaam because her husband reported that he had a cough.

"This is a humanitarian disaster and we need immediate attention," said Mynitti, a Minnesota resident who owns a house in Boca Raton. "Who are we (America) in times of an incredible crisis if we don't reach out in incredible generosity? In a crisis you can see how the men are divided from the boys."

The wait staff is from the Philippines, Thailand and Indonesia, many of whom are sick and need medical help, she said.

"This was a grand adventure that turned deeply tragic," she said.

Ellen Kennedy, spokeswoman for Port Everglades, said late Sunday afternoon no official decision had been made about where the ships would go.

Although initially stating that anyone with coronavirus would not be allowed passage through the canal, the Panama Canal Authority seemed to reverse course in a statement, saying late Saturday it "supports all efforts being made to ensure an expedited return home for cruise passengers and crew on Holland America's Zaandam."

The Zaandam was anchored outside Panama Canal waters, where healthy passengers were being transferred Sunday to Holland America's Rotterdam.

Myntti said the captain told passengers both ships were expected to enter into the canal Sunday night. The captain did not tell them where the final destination would be, although her family has been in touch with a congresswoman in Minnesota who said it will likely dock in Miami.

"Conditions are that all curtains and windows are covered and no one allowed on verandas," said Rotterdam passenger Cliff Kolber. "We do not know final destination."

The spokesman for the cruise line would not give an updated figure for the sick or give more information about the one American who is among the dead.

But the American was identified by his niece as Jeffrey Hagander, a Washington state resident, who died from a suspected heart attack or aneurysm -- not coronavirus.

LeAnn Morris Pliske, of Fort Lauderdale, said when she first heard about the ship bound for Fort Lauderdale she thought "oh that's terrible -- we don't want that here." Then she learned her aunt and uncle were on board.

"These are innocent people caught up in a nightmare. They are on 24-hour lockdown in their cabins. Have you ever been locked in one room for more than a week?" she said. "Seems like jail to me. My poor aunt is in the same stateroom she was sharing with her husband whom she watched expire on the floor despite the crew's efforts at revival. And she has to sit there, 24 hours a day, until some country will let the ships dock."

The cruise ship, on a South American journey, was first denied entry into Chile. Since then, four people died, two just tested positive for the new coronavirus, and the number of passengers and crew with flu-like symptoms has ballooned to 138.

Several Broward County commissioners were alarmed at the idea of the Zaandam docking at Port Everglades.

Commissioner Michael Udine said early Sunday that Port Everglades notified county commissioners late Saturday with its mandates for the passengers including: All illnesses and conditions must be accurately disclosed and documented; the cruise line, at its expense, will provide all protective equipment to all responders; temperature readings are required for all disembarking crew and passengers; and the cruise line, at its expense, will arrange for private ambulance transportation, among other requirements.

To minimize exposure, passengers are allowed off the ship with only one piece of luggage with essential items. The cruise line would sanitize all other luggage, according to Port Everglades regulations.

And, "no less than 24 hours in advance of the start of debarkation, the cruise line will present a security plan for review and approval ... how passengers will debark orderly, safely and in compliance with current health advisories (i.e. social distancing). Failure to maintain good order may result in an immediate suspension of the debarkation until the situation is under control," according to the guidelines.

Udine said the ship's pending arrival would be discussed at Tuesday's scheduled county commission meeting. It will take the ship 72 hours to get to Port Everglades after it passes through the Panama Canal.

Fort Lauderdale Mayor Dean Trantalis also spoke out against the ship coming to a community already experiencing a rapidly increasing spread of COVID-19.

"There are Navy bases on the Eastern seaboard where this ship could dock and be dealt with in a much more controlled environment," Trantalis said. "The problem here is that Port Everglades sits in the very middle of a vast urban area. There are neighborhoods to the north, south and west of the port."

If the ship does come here, Trantalis says foreign nationals should be triaged and put on planes destined for their own country as soon as possible.

"Sick Americans must be taken to hospitals that are not already facing the possibility of being overwhelmed," he said. "And, apparently healthy American passengers must be taken to secure quarantine destinations."

County Commissioner Mark Bogen says he has another proposal: Let the passengers off at Port Everglades, then take them by bus to the Homestead Air Reserve Base in Miami-Dade County to be quarantined.

"We protect Broward County residents and let these people off the ship," he said of his idea. "The feds put up the resources ... That protects Broward residents, it doesn't put a strain on our resources and it lets the people come in."

And U.S. Rep. Ted Deutch, a Democrat who represents most of Broward County north of Interstate 595 plus southeast Palm Beach County, was asked about the ship by a Fort Lauderdale caller during a telephone town hall Sunday afternoon.

He said "this is not just a situation" where the ship should be allowed to dock and people told to self-quarantine when they get off. "It's not safe for them; it's not safe for our communities."

He said "there is sufficient time" before the ship may arrive at Port Everglades to develop a reasonable plan.

"You cannot tell the ship to stay at sea forever, but also do it in a thoughtful and transparent way that helps to protect the lives of people in South Florida," Deutch said. "That needs to be the goal."

Gino Santorio, Broward Health's president and CEO, said in an email to the Sun Sentinel that "should a ship with sick patients dock in Fort Lauderdale, we will work with the port, local agencies and health partners to ensure cruise passengers receive the appropriate care."

A Miramar couple said early Sunday they were given permission about 8:30 a.m. to be transferred to the Rotterdam via a tender.

Cliff Kolber and his wife, Doris, have been holed up in their room for a week. Cliff Kolber was rejoicing Sunday morning at the news.

"We are coming home!" he said.

After so many days at sea, they are anxious to get home.

"We have permission to go through the canal," Cliff Kolber said. "We don't know when. The canal authorities made an exception for humanitarian reasons. So Broward should too. We've had four people die. We do not know if any more have died. Broward's got to let these people in."

Being allowed passage "shortens the time dramatically for the sick to get medical assistance," Kolber said. "A huge, huge thank you to the Canal Authority for making this exception. Now the -- hopefully only one -- remaining obstacle: Broward County. But I am hoping they understand lives are truly at stake here."