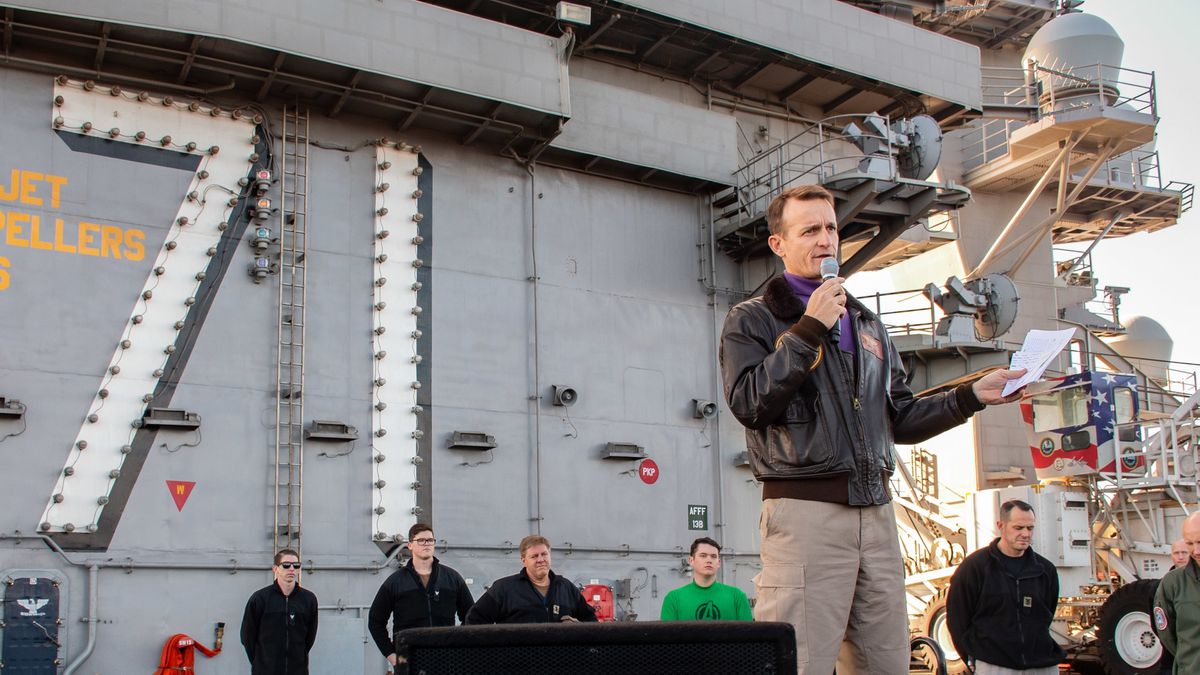 After days of chaos and sickness, sailors aboard the USS Theodore Roosevelt listened on Monday as the Navy's top political official took to a loudspeaker and fumed about how wrong it was that their captain had raised the alarm about the Navy's handling of a coronavirus outbreak on his ship in a letter that leaked to the media.

Acting Navy secretary Thomas Modly told the sailors that Navy Capt. Brett Crozier, relieved of command on Thursday, committed a "betrayal" by writing the letter and distributing it to some people who were not in his chain of command. Modly left open two possibilities.

"It was my opinion that if he didn't think information was going to get out into the public in this information age that we live in, then he was either A, too naive or too stupid to be the commanding officer of a ship like this," Modly said. "The alternate is that he did it on purpose, and that's a serious violation of the Uniform Code of Military Justice, which you are all familiar with."

The fiery speech, sprinkled with obscenities, plunged the Navy and the Trump administration deeper into a political crisis and prompted calls from Democratic lawmakers for Modly's resignation. It also promised to keep the plight of the Theodore Roosevelt under the microscope, now that Crozier and 172 more of its crew of 4,800 have tested positive for the virus.

Crozier's removal has drawn widespread attention, especially after videos of sailors cheering him as he left the ship circulated Friday.

In his remarks, Modly raged against the media, saying it "has an agenda and the agenda that they have depends on which side of the political aisle they sit."

And he criticized former vice president Joe Biden, the leading Democratic presidential nominee, saying that his allegation that the removal of Crozier was "close to criminal" was inaccurate and that "what your captain did was very, very wrong."

A Navy official said in an emailed statement on Monday morning that Modly's remarks, initially published by The Daily Caller, were "intended to be private, between the secretary and each member of the crew." The official and others spoke on the condition of anonymity because of the sensitivity of the issue.

But after an audio recording of the remarks leaked a couple of hours later on the website Task & Purpose, Modly doubled down.

"The spoken words were from the heart, and meant for them," Modly said in a statement. "I stand by every word I said, even, regrettably any profanity that may have been used for emphasis. Anyone who has served on a Navy ship would understand. I ask, but don't expect, that people read them in their entirety."

Among sailors on the ship and some of their family members, Modly's speech was met with disbelief.

Margalis Fjelstad, whose daughter is among the Theodore Roosevelt's sailors who have tested positive for the virus, said she was "sad and offended at the crass, unsympathetic, hostile and bitter response" by Modly.

"His emphasis shows that his public image seems to be his greatest concern and makes obvious his unsuitability for the job he is filling in currently," she said.

Modly's speech followed a tumultuous month in which sailors began testing positive for the coronavirus after a multiday port stop in Vietnam that had been approved by Adm. Philip Davidson, the top U.S. commander in the Pacific. It marked 25 years of relations between the United States and Vietnam, as the Pentagon seeks to deepen ties in the region in the shadow of China.

While President Donald Trump said over the weekend that "I guess the captain stopped in Vietnam," the decision was directed by more-senior Navy commanders. It was defended last week by Modly and Adm. Michael Gilday, the chief of naval operations, as being made while there were no reported cases within hundreds of miles.

According to relatives of sailors on board the vessel, crew members weren't issued any particular warning about the possibility of contracting covid-19, the disease the virus causes, even as people on shore in Vietnam were wearing face masks in certain places to avoid getting the virus. Less than a week after the ship left Vietnam on March 9, the nation's government mandated that people wear face masks in public spaces.

Modly said in an interview with conservative radio host Hugh Hewitt last week that the Navy didn't know who was "case zero" on the ship, and that the outbreak might not even have originated in Vietnam.

"They're flying in and out from all over the place," Modly said. "You know, this could have been contracted by a crew member who was in San Diego on leave before he arrived on the ship. We just don't know."

Whatever its origin, the outbreak became apparent within days.

On March 24, Modly informed the public that three individuals aboard the Theodore Roosevelt had tested positive and been evacuated from the carrier. He said others aboard the vessel who had contact with them had been identified and quarantined. "This is an example of how we are able to keep our ships deployed at sea and underway, even with active covid-19 cases."

Soon, Modly's confident portrayal of the Navy's handling of the situation aboard the aircraft carrier would be undercut. According to one relative of a sailor aboard the ship, many crew members didn't find out about the coronavirus cases until reading media reports.

For many, the revelation was unnerving. The social distancing that health experts had begun advising in the United States was all but impossible aboard the carrier, where crew members are housed in tight spaces, share restrooms and dining facilities, and often bunk together.

As the crisis mounted, the Navy leadership grouped the crew into those who were deemed essential to continue operating the carrier and those who were considered nonessential.

Many of those deemed essential were piled into a gym aboard the carrier and given cots to sleep on.

But according to the relatives of two sailors who were moved to the gym, crew members weren't tested or screened for the virus first. Soon enough, positive cases of covid-19, the disease caused by the novel coronavirus, began showing up among the group that was put there. Those crew members were told they would soon be moved to hotels on Guam, even as they crowded together for meetings, in contradiction to public health guidance. ​

Crozier and his superior officers, meanwhile, were struggling to reach a consensus on a plan of action, according to three people familiar with the discussions.

Among them were Rear Adm. Stuart Baker, who was embarked on the ship as its strike group commander, and Adm. John Aquilino, the commander of the U.S. Pacific Fleet. Both admirals favored smaller mitigation efforts than Crozier wanted because of concerns about taking the carrier out of action and jeopardizing the mission, while Crozier wanted a more aggressive effort up front in the hope that it would protect his crew's health and allow the ship to return to sea more quickly.

On March 30, Crozier sent his letter to Navy officials. While Modly described it at one point as a "blast-out email" to 20 to 30 people, a person interviewed said many of the people who received it were on Crozier's staff. Baker and at least one other admiral were not on it.

"The characterization that he did not go through the chain is not accurate," the friend of Crozier's said. "He did not route it to them for distribution because they were not buying in on the plan."

Crozier said in the letter that while the Theodore Roosevelt could set sail at any time, he was requesting that 90% of the crew be removed for testing and quarantining and the disinfecting of the ship.

"We are not at war. Sailors do not need to die," Crozier wrote. "If we do not act now - we are failing to take care of our most trusted asset - our Sailors."

The following day, the letter leaked and was published by the San Francisco Chronicle, angering senior Navy officials still sensitive to any perception that they might put a mission before the well-being of sailors. After the death of 17 sailors in two ship collisions in 2017, the service promised it would listen to ship captains who raise concerns about whether they are ready to sail.

On Wednesday, Gilday said at the Pentagon that the Navy wasn't "looking to shoot the messenger" in Crozier's case. But Modly sounded less committed to keeping the captain on.

A day later, Modly announced that he had directed the removal of Crozier and that he already had been thinking of doing so on Wednesday.

Word of Crozier's removal was met by the crew of the Theodore Roosevelt with a mixture of shock, anger and disappointment, according to family members and one sailor still aboard the ship.

"We were excited to see what else he could have brought to the table as far as being a great leader," said one enlisted sailor.

In an emotional send-off, hundreds of sailors crowded into an aircraft hangar on the ship as Crozier exited early Friday, chanting his name as he exited off a gangway alone.

The visuals, captured by numerous sailors on video, put senior U.S. officials on the defensive.

Rep. Adam Smith, D-Wash., chairman of the House Armed Services Committee, said he disagreed with the way Modly has handled the outbreak.

"His decision to relieve Captain Crozier was at best an overreaction to the extraordinary steps the Captain took to protect his crew," he said in a statement.

Rep. Ruben Gallego, D-Ariz., a Marine veteran, said Modly "spectacularly disqualified himself as an effective leader" of the Navy.

"President Trump or Secretary Esper should fire him," Gallego said.

Trump, asked about the controversy at the White House on Saturday, said he supported Crozier's dismissal but noted that he didn't make the decision.

The president said Crozier's letter was "terrible" and not appropriate.

Modly left to visit Guam over the weekend, seeking to quell the outcry.

Asked Monday evening about Modly's statement, Trump said he "hadn't heard it exactly," but he called it "strong."

The president said sending the letter was a "mistake," but then he suggested that Crozier's career might not be over.

"With all of that said, his career prior to that was very good, so I'm going to get involved and see exactly what's going on there, because I don't want to destroy somebody for having a bad day," he said.

The Washington Post’s Missy Ryan and Julie Tate contributed to this report.