Even where virus accelerates, lockdowns are cracking open 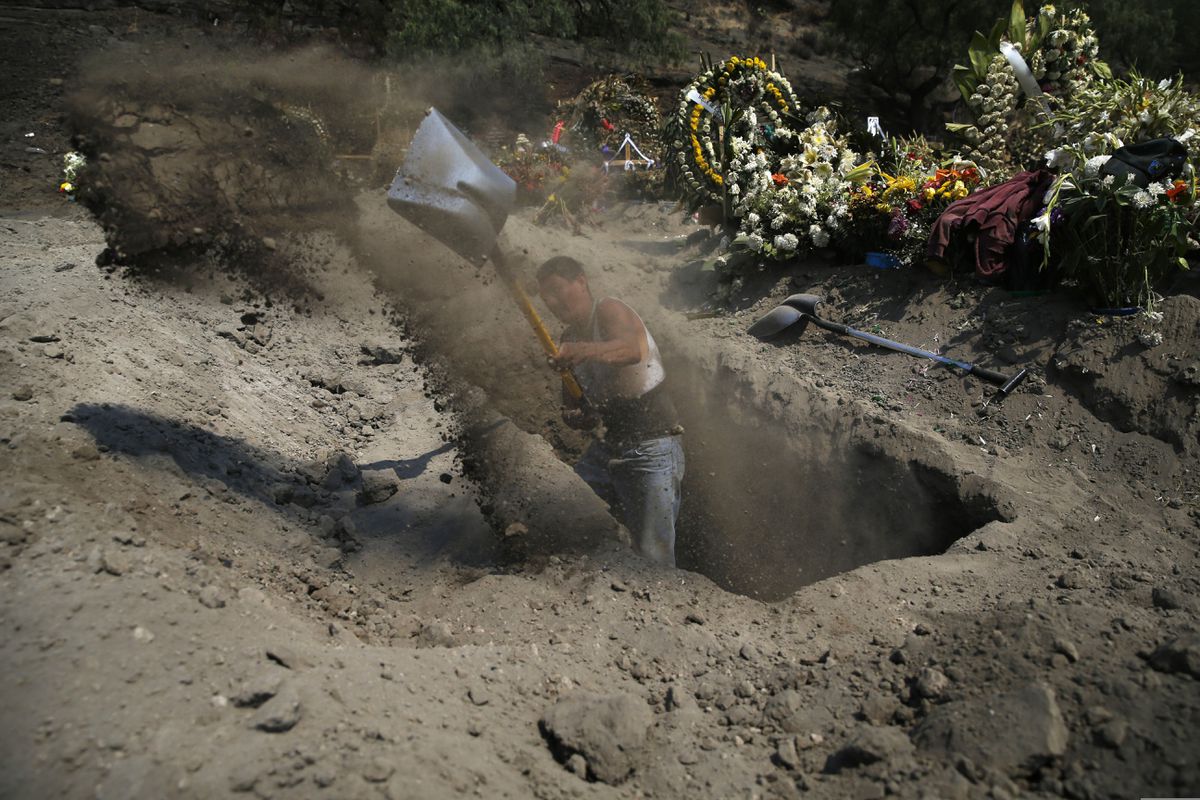 A worker digs a new grave at a newly inaugurated plot at the Valle de Chalco Municipal Cemetery, built to accommodate the rise in deaths amid the new coronavirus pandemic, on the outskirts of Mexico City, Thursday, May 21, 2020. (AP Photo/Marco Ugarte)

A worker digs a new grave at a newly inaugurated plot at the Valle de Chalco Municipal Cemetery, built to accommodate the rise in deaths amid the new coronavirus pandemic, on the outskirts of Mexico City, Thursday, May 21, 2020. (AP Photo/Marco Ugarte)

NEW DELHI — The coronavirus pandemic accelerated across Latin America, Russia and the Indian subcontinent on Friday even as curves flattened and reopening was underway in much of Europe, Asia and the United States.

Many governments — even those where the virus is still on the rise — say they have to shift their focus to saving jobs that are vanishing as quickly as the disease can spread. In the United States and China, the world's two largest economies, unemployment is soaring.

The Federal Reserve chairman has estimated that up to one American in four could be jobless, while in

China analysts estimate around a third of the urban workforce is unemployed.

But the virus is roaring through countries ill-equipped to handle the pandemic, which many scientists fear will seed the embers of a second global wave.

India saw its biggest single-day spike since the pandemic began, and Pakistan and Russia recorded their highest death tolls. Most new Indian cases are in Bihar, where thousands returned home from jobs in the cities. For over a month, some walked among crowds for hundreds of miles.

Latin America’s two most populous nations — Mexico and Brazil — have reported record counts of new cases and deaths almost daily this week, fueling criticism of their presidents, who have slow-walked shutdowns in attempts to limit economic damage.

Cases were rising and intensive-care units were also swamped in Peru, Chile and Ecuador — countries lauded for imposing early and aggressive business shutdowns and quarantines.

Brazil reported more than 20,000 deaths and 300,000 confirmed cases Thursday night — the third worst-hit country in the world in terms of infection by official counts. Experts consider both numbers undercounts due to widespread lack of testing.

“It does not forgive, it does not choose race, or if you are rich or poor, black or white,” Bruno Almeida de Mello, a 24-year-old Uber driver, said at his 66-year-old grandmother’s burial in Rio de Janeiro. “It’s sad that in other countries people believe, but not here.”

She had all the virus’s symptoms, but Vandelma Rosa’s death certificate reads “Suspected of COVID-19,” he said, because her hospital lacked tests. That means she didn’t figure in the death toll, which nevertheless on Thursday marked its biggest single-day increase: 1,181.

President Jair Bolsonaro has scoffed at the seriousness of the virus and actively campaigned against state governors’ attempts to limit movement and commerce.

Bolsonaro fired his first health minister for supporting governors. His second minister resigned after openly disagreeing with Bolsonaro about chloroquine, the predecessor of the anti-malarial often touted by U.S. President Donald Trump as a viable coronavirus treatment.

Mexican President Andrés Manuel López Obrador downplayed the threat for weeks as he continued to travel the country after Mexico’s first confirmed case. He insisted that Mexico was different, that its strong family bonds and work ethic would pull it through.

The country is now reporting more than 400 deaths a day, and new infections still haven’t peaked.

Armando Sepulveda, a mausoleum manager in suburban Mexico City, said his burial and cremation business has doubled in recent weeks.

“The crematoriums are saturated,” Sepulveda said. “All of the ovens don’t have that capacity.” Families scour the city looking for funeral services that can handle their dead, because the hospitals can’t keep the bodies, he said.

Meanwhile Mexico’s government has shifted its attention to reactivating the economy. Mining, construction and parts of the North American automotive supply chain were allowed to resume operations this week.

Russian health officials registered 150 deaths in 24 hours, for a total of 3,249. Many outside Russia have suggested the country is manipulating its statistics to show a comparatively low death rate. The total confirmed number of cases exceeded 326,000 on Friday.

The governor of the German region of Saxony, Michael Kretschmer, suggested that his country could bring in Russian patients, as it has those from European Union countries as a gesture of “solidarity.”

China announced it would give local governments 2 trillion yuan ($280 billion) to help undo the damage from shutdowns imposed to curb the spread of the virus that first appeared in the city of Wuhan in late 2019 and has now infected at least 5.1 million people worldwide, according to a tally by Johns Hopkins University.

The Bank of Japan said it would provide $280 billion in zero-interest, unsecured loans to banks for financing small and medium-size businesses.

Nearly 39 million Americans have lost their jobs since the crisis accelerated two months ago. States from coast to coast are gradually reopening their economies and letting people return to work, but more than 2.4 million people filed for unemployment last week alone.

Much of the country remains unlikely to venture out to bars, restaurants, theaters or gyms anytime soon, despite state and local officials across the country increasingly allowing businesses to reopen, according to a new survey by The Associated Press-NORC Center for Public Affairs Research.

That hesitancy could muffle any recovery from what has been the sharpest and swiftest economic downturn in U.S. history — comparable only to the Great Depression almost 90 years ago.

In an eerie echo of famous Depression-era images, U.S. cities are authorizing homeless tent encampments, including San Francisco, where about 80 tents are now neatly spaced out on a wide street near city hall as part of a “safe sleeping village” opened last week. The area between the city’s central library and its Asian Art Museum is fenced off to outsiders, monitored around the clock and provides meals, showers, clean water and trash pickup.

Nathan Rice, a 32-year-old who is camping there, said he’d much rather have a hotel room than a tent on a sidewalk.

“I hear it on the news, hear it from people here that they’re going to be getting us hotel rooms,” he said. “That’s what we want, you know, to be safe inside.”

Despite an often combative approach to scientists who disagree with him, Trump’s approval ratings have remained steady, underscoring the way Americans seem to have made up their minds about him. A poll from The Associated Press-NORC Center for Public Affairs Research says 41% approve of his job performance, while 58% disapprove. That’s consistent with opinions of him throughout his three years in office.

In Congress, Republicans are staking out plans to phase out coronavirus-related unemployment benefits to encourage Americans to go back to work, although it’s not clear when there will be jobs to return to. The Senate also began efforts to fast-track an extension of a popular small business lending program.

European countries also have seen heavy job losses, but robust government safety-net programs in places like Germany and France are subsidizing the wages of millions of workers and keeping them on the payroll. Tourism, a major income generator for Europe, has become a flashpoint as countries debate whether to quarantine new arrivals this summer for the virus’s two-week maximum incubation period.

Spain’s National Statistics Institute published its tourism report Friday showing columns of zeros for overnight stays, average length of stays and occupancy rates in April. Spain is Europe’s second most popular tourist destination, after France, and an economic recovery without visitors is all but unthinkable.