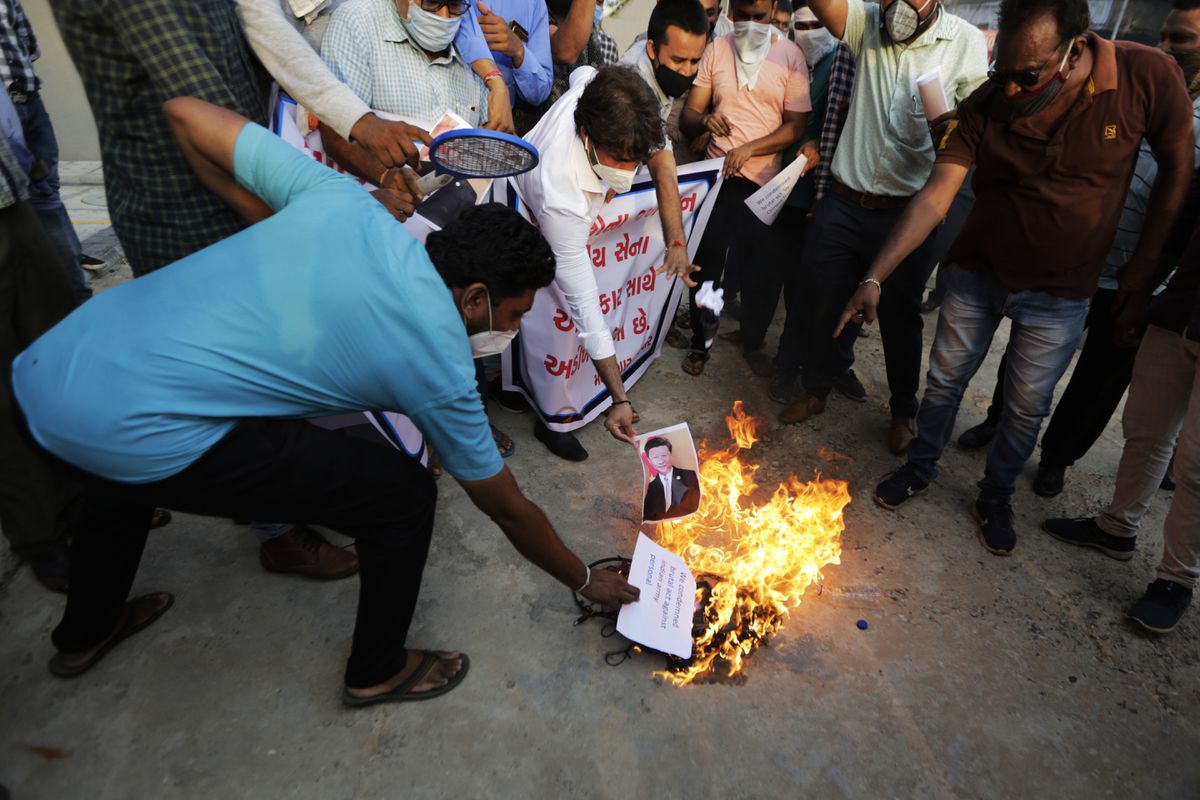 An Indian man burns a photograph of Chinese president Xi Jinping during a protest against China in Ahmedabad, India, Tuesday, June 16, 2020. At least 20 Indian soldiers, including a senior army officer, were killed in a confrontation with Chinese troops along their disputed border high in the Himalayas where thousands of soldiers on both sides have been facing off for over a month, the Indian army said Tuesday. (AP Photo/Ajit Solanki)

An Indian man burns a photograph of Chinese president Xi Jinping during a protest against China in Ahmedabad, India, Tuesday, June 16, 2020. At least 20 Indian soldiers, including a senior army officer, were killed in a confrontation with Chinese troops along their disputed border high in the Himalayas where thousands of soldiers on both sides have been facing off for over a month, the Indian army said Tuesday. (AP Photo/Ajit Solanki)

NEW DELHI - Twenty Indian soldiers were killed in clashes with Chinese troops high in the Himalayas, the Indian army said Tuesday, marking the most serious conflict between the two nuclear-armed neighbors in decades.

The deaths occurred in the mountainous region of Ladakh where India and China share a disputed - but largely peaceful - border. No Indian soldiers have been killed in clashes on the frontier between the two countries since 1975, experts say, and no casualties of this magnitude have occurred since 1967.

The world's two most populous nations, India and China are both rising powers that view each other warily. Apart from a war in 1962, they have tended to resolve periodic flare-ups along the border through negotiation.

In recent weeks, however, tensions between the two countries have spiked. Indian and Chinese troops engaged in physical brawls that left dozens injured at two points along their 2,200-mile frontier.

Analysts say that Chinese troops have also moved to establish a presence in four areas claimed by India near the unofficial border in Ladakh, leading to a tense standoff involving thousands of troops from both countries. Senior military officials have held meetings in the area to try to resolve the issue.

Instead, the clash on Monday night marks a grave escalation. India at first said that three soldiers had died in a "violent faceoff" that caused "casualties on both sides." Later Tuesday, the Indian Army said in a statement that 17 more Indian troops who were "critically injured in the line of duty" had "succumbed to their injuries." It did not say how they were killed. The troops of the two armies in the area subsequently "disengaged," the statement said.

Col. Zhang Shuli, a spokesman for the Chinese military, said there had been a "fierce physical conflict, causing casualties." He accused India of crossing the unofficial border between the two countries - known as the "Line of Actual Control" - to "launch a provocative attack." India blamed the conflict on China's attempt to "change the status quo" in the area.

The clash comes at a time when China is flexing its muscles across the region amid a global pandemic. In recent weeks it has confronted Malaysian and Vietnamese vessels in the South China Sea and twice sailed an aircraft carrier through the Taiwan Strait. China also unilaterally moved to seize new powers over Hong Kong.

Like other countries in the region, India views China's rise with disquiet. In recent years, India has drawn closer to the United States, partly due to shared concerns over China's growing influence.

Most of lengthy frontier between India and China is neither marked in real life nor delineated on any maps shared by the two countries. Instead, the Indian and Chinese armies send patrols up to what they claim is the Line of Actual Control and then retreat. Altercations have ensued but rarely serious ones.

What occurred last month is qualitatively different, analysts say. Instead of expanding patrol arcs deeper into Indian-claimed areas as they have done in the past, Chinese troops have "taken physical possession by occupying territory," said Ashley Tellis, a former senior George W. Bush administration official and longtime India expert.

Chinese troops have crossed several kilometers into territory that India claims at several different points in Ladakh, according to analysts and media reports. In particular, reports say, they have occupied an area in the Galwan River valley that overlooks a strategically crucial road for India. Monday night's deadly clashes took place in the Galwan valley, the Indian Army said.

India has limited options for responding to what it considers Chinese incursions. "Any attempt at physical eviction is going to lead to major conflict," said Tellis. Instead, India is likely to try to negotiate a withdrawal while blocking any future intrusions, he said.

Unlike that flare-up, there is no immediate local trigger for the current conflict, said D.S. Hooda, a retired general who previously commanded the Indian army forces in Kashmir. While India is building a road in the area, it has been under construction for a decade, Hooda said, and is already in use. Instead, China's recent moves are part of a "bigger game plan," he said. "They obviously want to pressurize India."

Last month, President Trump said that the United States was "ready, willing and able to mediate or arbitrate" what he described as a "raging border dispute" between India and China. Neither country accepted the offer.

It is unclear exactly what prompted Monday's conflict or how the injuries were caused. One of the Indian soldiers who was killed was a father of two serving in an artillery regiment, according to his family.

Hu Xijin, editor of the nationalist state-run newspaper, the Global Times, said on Chinese-language Weibo that his sources told him there had been Chinese casualties in the clash, but he did not specify if there were any deaths or give further details.

"I want to tell Indians: do not misjudge China's restraint as weakness, and never be arrogant before China," he said. "China does not want conflict with India, but it is never afraid of conflict."

Song Zhongping, a Chinese military analyst and former lecturer at the People's Liberation Army Rocket Force University of Engineering, accused India of engaging in a series of premeditated escalations "to distract from their domestic political situation." China needs to "try the best methods to resolve the issue by diplomatic means, but also prepare militarily for the worst outcome."

Earlier this month the Chinese military staged a drill that moved thousands of paratroopers "within hours" from central Hubei province to a remote Himalayan mountain range. The exercise, which was publicized by the PLA, was designed to send a message that China was able to rapidly deploy reinforcements to the Indian border and fight in low-temperature and low-oxygen conditions, according to state media.

Indian analysts said that China's actions were another sign of its aggressive intentions in the region. There is a "new edge" to China's attitude, said Nirupama Rao, a former Indian ambassador to China. "This assertiveness, this readiness to throw [away] internationally accepted behavior to advance their claims and interests, it's worrisome for so many countries."

Shih reported from Seoul. The Washington Post’s Lyric Li in Beijing contributed to this report.