Heat is turbocharging fires, drought and tropical storms this summer 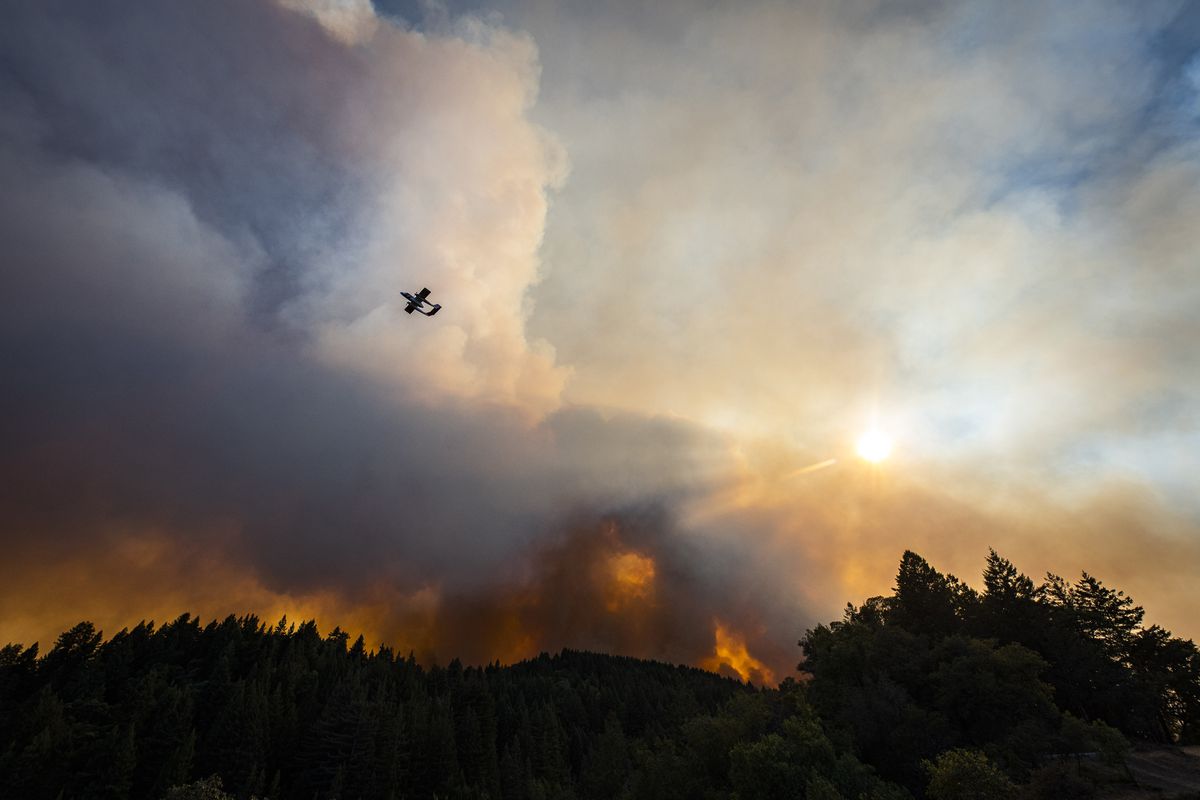 A Cal Fire air attack plane flies over the Walbridge blaze near Healdsburg, Calif., on Thursday. Photo by Stuart W. Palley for The Washington Post

A Cal Fire air attack plane flies over the Walbridge blaze near Healdsburg, Calif., on Thursday. Photo by Stuart W. Palley for The Washington Post

SAN FRANCISCO - First came the lightning, with cracks of thunder that woke Hope Weng from sleep. “I thought it was someone wheeling out one of the garbage bins,” the 23-year-old said. Then came the wildfires, mixing with the unbearable heat that was tough to escape in her unairconditioned Mountain View apartment. “I’m hot and I want to let the window open to let in cool air but the air also smells like fire.”

At least 140 western weather stations notched record highs in the last 10 days as a thermometer in Death Valley hit 130 degrees Fahrenheit, one of the highest temperatures measured on Earth. Eighty million U.S. residents are under excessive heat advisories. More than 35 wildfires are raging in California, burning 125,000 acres in the San Francisco Bay Area alone, threatening 25,000 businesses and homes this week. Parts of the country are suffering drought conditions. And in the Atlantic Ocean, a marine heat wave is fueling what is becoming an unusually active storm season.

Scientists say there is no doubt that climate change is driving the extreme weather, increasing the threats to property and life. "Yeah, it's summer, and summer is hot, but this is different," the National Weather Service tweeted. "These are dangerous conditions."

Conditions are made even more perilous by the worst pandemic in a century. Tens of thousands of people are trying to escape wildfires and extreme heat at a time when they are also asked to wear masks and keep a distance from strangers. And as a hurricane season turbocharged by heat gets underway, the virus promises to complicate responses.

In Colorado, four wildfires are scorching forest, and half the state is experiencing severe to extreme drought, according to the U.S. Drought Monitor, creating dry brush that's primed to ignite. The Pine Gulch fire 18 miles north of Grand Junction, sparked by lightening on July 31, is already the state's second-largest in history.

On the other side of the country, the Atlantic Ocean is about two to three degrees warmer than average at points across the Eastern Seaboard, raising concerns that a marine heat wave could make hurricanes more powerful.

Scientists are worried that the 2020 hurricane season could rival 2005, the record-breaking year that produced Katrina, Rita and Wilma and exhausted the Greek alphabet to name the total number of them, all the way up to Zeta.

"With warmer water there is just more energy there for the storms," said Glen Gawarkiewicz, a senior scientist for the Woods Hole Oceanographic Institution. "The things can get up to category 3 very quickly and that makes emergency response difficult when the storms intensify more rapidly."

The 2020 hurricane season is only now reaching its traditional busy period but there have already been 11 named storms. Forecasts suggest more than 20 more storms are coming, including as many as six hurricanes at the intensity levels of category 3 or higher. On Friday, two more systems were developing in the Atlantic Ocean and the Caribbean Sea.

While the Atlantic Ocean was relatively cool in the early spring, temperatures rose this summer - causing a temperature spike known as a marine heat wave from southern Maine to Georgia.

"We found marine heat waves have been increasing in both their intensity, and their duration," said Vince Saba, lead climate scientist at the National Oceanic and Atmospheric Administration Northeast Fisheries Science Center. He and other researchers have analyzed satellite data dating back to 1981 to examine long-term trends in ocean temperatures off the Eastern Seaboard.

As the Atlantic has warmed, unusual species have been showing up further north. Groups of Portuguese man 'o war, which usually congregate in tropical and subtropical waters, washed ashore on Fire Island, off Long Island. An angler caught a juvenile cobia, a sport fish popular in the Southeast, off Rhode Island's Block Island. In July, a man fishing off Nantucket caught a houndfish, a warm-water species that may never have been caught before along the Massachusetts shore.

"This year is strange, in a nutshell," Saba said.

High temperatures can cause dehydration, low blood pressure, dizziness and muscle spasms. If the body's thermoregulatory system becomes overwhelmed, cells will begin to break down and essential organs will fail.

According to the Centers for Disease Control and Prevention, more than 8,000 people in the United States died of heat-related symptoms between 1999 and 2010. Nearly all the deaths happened between May and September, with July and August accounting for the highest toll, 65 percent.

Most heat-related deaths happen in cities and occur among non-White people, according to the CDC. The states with the highest death rates, the agency said, are Arizona, Texas and California, accounting for 43 percent of the total.

Officials in Maricopa County, Ariz., where the mercury has hit 115 degrees a record-breaking eight times this summer, are already investigating at least 243 deaths linked to heat illness - 111 more cases than were recorded at this point last year.

"This is climate change," said Susan Clark, a heat expert and director of the Sustainability Initiative at the University of Buffalo. "This increased intensity and frequency of temperatures and heat waves are part of the projections for the future . . . There is going to be more morbidity and mortality [from heat.] There are going to be more extremes."

The oppressively hot and relentlessly dry conditions in Western states are the result of a massive "heat dome," a wall of high pressure that's sucking moisture from the soil and preventing clouds from forming.

Climate change has already raised average temperatures in many Southwest cities by 2 degrees Celsius, which is 3.6 degrees Fahrenheit. Conditions aren't much better on the muggy East Coast. Delaware, Maryland, New Jersey and New Hampshire each experienced their hottest July on record this year.

In New York City, where glass and concrete traps the sun's energy and create a "heat island," officials opened fire hydrants and set up misting stations during week-long stretches of 90 degree temperatures.

When temperatures spike, the most vulnerable people suffer the most, said environmental justice activist Chandra Farley, director of the Just Energy program at the Atlanta-based Partnership for Southern Equity.

Black and Latino Americans are more likely to live in neighborhoods with lots of industry and few trees, which contributes to the heat island effect. People living on low incomes are less able to afford air conditioning.

Living at or near poverty in an urban hot zone during a pandemic is made even worse when wildfire and hurricanes become a threat.

With California experiencing extreme fires yet again, the region's electrical grid operator and the utilities have switched off power to hundreds of thousands of homes to prevent sparking that could lead to more fires.

"If there's anything I've learned it's that Mother Nature is a very formidable adversary and only a fool would underestimate the power of what can happen," said Bill Smith, the recently named chief executive of Pacific Gas & Electric, which declared bankruptcy last year after facing $30 billion in liability for fires, including the Camp Fire that killed at least 85 people.

Every day, Smith gets a seven-day weather forecast looking at the wind and moisture and actions that might protect the utility's infrastructure and prevent its equipment from starting a fire.

So far this season, PG&E has cut back vegetation along 1,500 miles of power lines, installed insulated conductors, cameras and fiberglass poles in areas susceptible to fire. It has also installed nearly 600 switches that will enable the utility to turn off power to smaller areas in what Smith called a more "surgical" response to fire.

Yet this week, the utility was ordered by the regional grid operator to help with rolling blackouts that affected more than 400,000 people in the midst of the state's heat wave, Smith said.

"I hold my breath going into wildfire season," said Smith, who spent most of his career working for AT&T before joining the PG&E board last year. "I was on a call with investors and somebody asked how comfortable are you with the preparation for the wildfire season. I said I can't use the words comfortable and wildfire in same sentence."

There is also distress in Colorado.

Four fires are underway, one of which has shut down part of I-70, the main highway connecting eastern and western Colorado. The number and intensity are unusual. Between 2002 and 2019, wildfires in Colorado destroyed an average of 82,778 acres of land every year. So far, just these four fires have burned 181,816 acres of land, or an area about four times the size of the District of Columbia.

"As a fire scientist, I can say fires are really responsive to warming," said fire ecologist Jennifer Balch, who directs the Earth Lab at the University of Colorado-Boulder. "With just a little bit of warming, we're seeing a lot more burning. We have twice as much burning now as we were seeing in the early 1980s."

Even in the normally cool state of Washington, at least four wildfires are burning and temperatures spiked to levels rarely seen.

On Sunday, throngs of Seattle residents rushed to its shores to cool off from the 98-degree heat, the hottest its been in 11 years, since it hit 103 degrees in July of 2009, according to the National Weather Service measurements at the Seattle-Tacoma International Airport.

"I remember thinking, I moved here because I like the cool!" said Seattle resident David Ziff, who was taking a work call in his car because it had air-conditioning.

The Seattle Fire Department reported three fatal drownings during a 10-day stretch of warm weather, when people jumped off boats into Lake Washington and didn't resurface. The drownings are a rare number for such a short period of time, said Seattle Fire spokesperson Kristin Tinsley.

It's not uncommon for the northwest city to get a small heat wave each summer, but many people found themselves unprepared for Sunday's furnace blast. The city is one of the least air-conditioned in the country, according to the U.S. Census Bureau, and with pandemic concerns keeping many restaurants and cafes shuttered, residents had no choice but to stay at home.

"I normally walk around a lot," said Samantha Steele, as she read a book by the lake on Tuesday after the worst of the heat was over. In years past, she would have gone to a nearby coffee shop to savor the air conditioning, but social distancing protocols kept her home.

"So I stayed inside," she said, "under my ceiling fan."