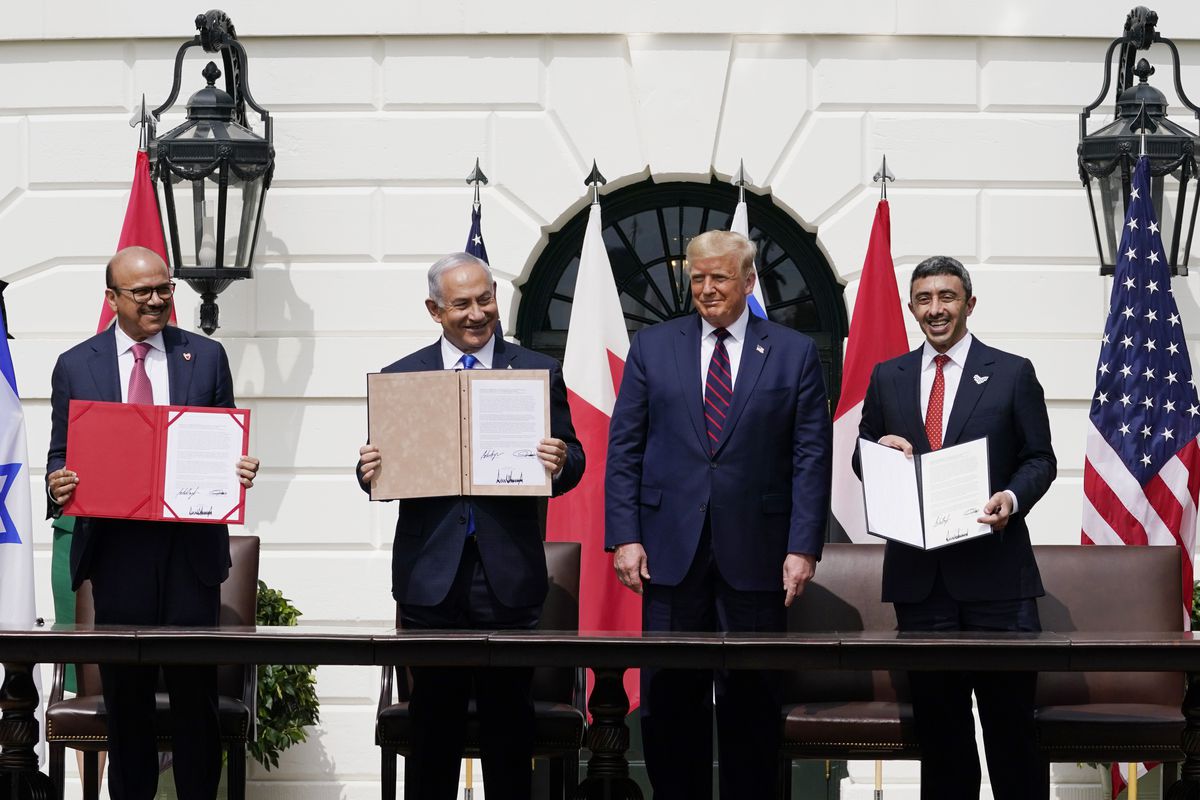 WASHINGTON - President Donald Trump presided over a White House signing ceremony Tuesday in which Israel established formal ties with two Arab states, the United Arab Emirates and Bahrain, in what Trump calls the flowering of his Middle East peace plan.

The agreement, called the Abraham Accord in honor of the three Abrahamic religions rooted in what is now Israel and surrounding lands, lays the ground for diplomatic, economic and other ties between Israel and two Persian Gulf neighbors.

“We’re here this afternoon to change the course of history. After decades of division and conflict, we mark the dawn of a new Middle East,” Trump said, addressing a crowd on the South Lawn from a podium set up on the balcony above. “Thanks to the courage of the leaders present, we take a major stride toward a future in which people of all faiths and backgrounds can live together in peace and prosperity.”

Israeli Prime Minister Benjamin Netanyahu attended the ceremony, but the UAE and Bahrain chose to send their foreign ministers rather than heads of state or government. That, along with precautions against the spread of the coronavirus, denied Trump the chance to fully re-create the historic group handshakes that were the symbolic capstone of past White House peace ceremonies.

Nonetheless, the agreement is historic on its own. The last Arab state to make peace with Israel was Jordan, in 1994. Egypt was the first, in 1979. The agreement is also significant for relegating the Palestinians to the sidelines. Palestinian leaders have rejected the Trump peace efforts for three years and have called the two Arab nations traitors to their cause.

Neither the UAE nor Bahrain is at war with Israel, so the document is not a peace treaty in the formal sense. But until now, both Persian Gulf states had officially considered Israel to be illegitimate.

Arab states in the Persian Gulf have edged closer to Israel over the past decade, largely in response to a shared desire to blunt Iranian influence in the region.

On Tuesday, Trump once again expressed a desire to strike a deal with Iran over its nuclear program after earlier in his administration ripping up an accord reached by Tehran with the Obama administration to curtail Iran’s nuclear ambitions. Trump and administration officials say that agreement did not do enough to prevent Iran from building a weapon or to curtail its aggressive behavior in the region.

“I really believe Iran wants to make a deal,” Trump said during a meeting in the Oval Office with Netanyahu ahead of the signing ceremony. “I want Iran to be a great country.”

Trump separately welcomed the foreign ministers and Netanyahu in Oval Office meetings, two of which were opened to reporters. UAE Foreign Minister Abdullah bin Zayed told Trump that the deal offers a chance for more cooperation in the region, and more between the United States and UAE.

“You have the key to the heart of the Jewish people,” Netanyahu replied.

Trump predicted that five more countries could soon fallow suit and recognize Israel. He declined to name which they may be.

A Trump administration official, briefing reporters Monday, declined to spell out what the documents being signed would say, adding that the texts would not be available until after the White House ceremony.

The official spoke on the condition of anonymity under rules set by the White House, though the official himself said he did not see why that was necessary.

The White House sent out hundreds of invitations, and far more guests attended than allowed under the District of Columbia’s coronavirus protocols. As with political events at the White House during the Republican National Convention last month, the Trump administration does not consider itself bound by those rules.

Israel has seen coronavirus cases spike in the late summer, and Netanyahu’s management of the pandemic prompted protesters to chant “Your time is up!” outside his home last month. It was some of the fiercest criticism he has faced in more than a decade in office.

Guests at the White House ceremony were encouraged to wear masks, but they were not required to do so, the senior administration official said.

“It will be on the South Lawn, which is obviously a pretty vast space,” the official said.

Some of the guests who attended the event did not wear a mask, and seats were set up next to one another rather than being spaced apart.