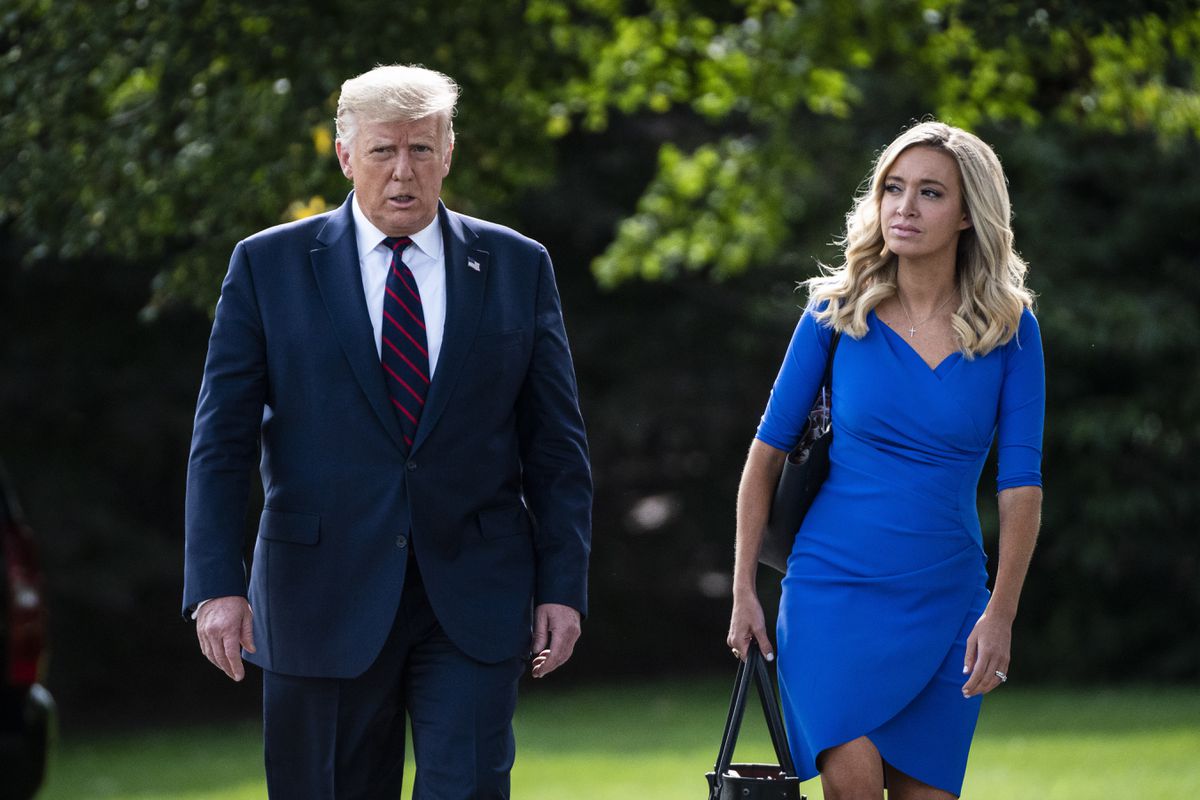 President Donald J. Trump walks with Press Secretary Kayleigh McEnany to board Marine One and depart from the South Lawn of the White House on Tuesday, Sept 15, 2020 in Washington, DC. Washington Post photo by Jabin Botsford

President Donald J. Trump walks with Press Secretary Kayleigh McEnany to board Marine One and depart from the South Lawn of the White House on Tuesday, Sept 15, 2020 in Washington, DC. Washington Post photo by Jabin Botsford

WASHINGTON - President Donald Trump on Wednesday called on congressional Republicans to support a massive economic relief bill with “much higher numbers” and stimulus payments for Americans, abruptly proposing an entirely different plan from what the Senate GOP sought to advance in recent days.

His Twitter post and subsequent comments at a news conference could reframe talks that have stalled for more than a month, and put new pressure on leaders in both parties. They come at a moment when House Speaker Nancy Pelosi, D-Calif., is facing a backlash from some House Democrats, including lawmakers in tough reelection races, over congressional inaction on new economic relief.

Speaking at the White House on Wednesday evening, Trump expressed support - but not an explicit endorsement - for a $1.5 trillion plan unveiled Tuesday by the bipartisan Problem Solvers Caucus in the House. The proposal includes a new round of $1,200 stimulus checks to individual Americans, a provision omitted from an approximately $300 billion plan Senate Republicans tried unsuccessfully to pass last week.

“I like the larger amount, I’ve said that,” Trump said. “Some of the Republicans disagree but I think I can convince them to go along with that because I like the larger number. I want to see people get money.”

Trump stopped short of saying he would approve every detail of the Problem Solvers plan but said, “Something like that,” and, “We’re getting closer.”

Congressional leaders in both parties have already rejected the Problem Solvers proposal - Republicans because it costs too much, and Democrats because it doesn’t go far enough.

It wasn’t immediately clear how Trump’s comments would affect the state of play on Capitol Hill, where bipartisan talks have been stalled for more than a month. But it seemed possible that his renewed interest in a generous aid deal could open the door to a new round of talks.

There were some additional signs of movement Wednesday. Pelosi and Treasury Secretary Steven Mnuchin had their first phone conversation in more than two weeks about coronavirus relief legislation, although it was not extensive, according to Pelosi’s spokesman.

A growing number of House Democrats continued to expressed the desire for action on legislation of some kind before Congress goes on recess early next month through the election. And Pelosi and Senate Minority Leader Charles Schumer, D-N.Y., seized on Trump’s new position and suggested it validated their approach.

“We are encouraged that after months of the Senate Republicans insisting on shortchanging the massive needs of the American people, President Trump is now calling on Republicans to ‘go for the much higher numbers’ in the next coronavirus relief package,” Pelosi and Schumer said in a statement. “We look forward to hearing from the president’s negotiators that they will finally meet us halfway with a bill that is equal to the massive health and economic crises gripping our nation.”

In his Twitter post Wednesday, Trump mischaracterized Democrats' position by saying they were “heartless” for not wanting “to give STIMULUS PAYMENTS to people who desperately need the money, and whose fault it was NOT that the plague came in from China. Go for the much higher numbers, Republicans, it all comes back to the USA anyway (one way or another!).”

Democrats had, in fact, supported these additional stimulus payments, which were part of a $3 trillion bill the House passed in May. That measure never became law because the White House and Senate Republicans rejected many other parts of the legislation, including aid to states. In the Senate, Republicans were unable to unify around a $1 trillion bill in July that also included another round of stimulus checks, because so many of their members opposed spending even that much.

Last week, the Senate GOP tried to advance an approximately $300 billion bill without stimulus checks, but Senate Democrats blocked it, calling it inadequate.

The framework produced by the Problem Solvers caucus, which is made up of 25 Democrats and 25 Republicans in the House, includes some provisions the White House would likely reject, including $500 billion in aid to cities and states - although that is less than the nearly $1 trillion Democrats had supported. In addition to new stimulus checks, it would renew a lapsed $600 weekly enhanced unemployment benefit, while adding a stipulation important to Republicans that no one should receive more than 100 percent of their previous wages.

And, the $1.5 trillion proposal includes automatic “boosters” and “reducers” based on covid hospitalization and vaccine metrics, that could potentially add $400 billion to the cost of the bill, or reduce it by $200 billion.

“There’s some things I disagree with but I’m sure they could be negotiated,” Trump said.

Rep. Tom Reed, R-N.Y., a leader of the Problem Solvers, had kept the White House in the loop on the proposal.

“I think our proposal triggered a change in conversation,” Reed said in an interview earlier Wednesday. He noted that the coronavirus talks were “stuck in gridlock and at least now we see folks both at the House, Senate and White House individuating they’re willing to have a conversation and get back in the room.”

And on Tuesday, eight Democratic House committee chairs released a joint statement saying the proposal “falls short of what is needed to save lives and boost the economy.”

Nevertheless some lawmakers saw signs of hope. Sen. Roy Blunt, R-Mo., said a deal could be reached but that lawmakers probably needed an agreement by the end of September.

“We need to get busy finding out what we can all agree on,” he said, acknowledging it would have to be higher than the $1 trillion bill Senate Republicans released in July.

Blunt pointed to the provisions in the Problem Solvers plan allowing it to get smaller or larger depending on certain metrics.

“Maybe the escalator clause concept gives everybody a little something to brag about,” Blunt said. “There’s a deal there. I think it would be really a shame if we don’t figure out how to grab hold of it.”

Congress is scheduled to be in session through early October, and it must also pass a spending bill to avert a government shutdown Oct. 1.

Multiple efforts to revive the economic relief talks have failed in the past, but Pelosi has recently come under pressure to take new action.

“I am hopeful that as leadership registers the anxiousness of members, both Democrats and Republicans, to get something done, that they will be responsive to that,” Rep. Stephanie Murphy, D-Fla., a leader of the moderate Blue Dog Coalition, told reporters Wednesday.

Trump senior adviser and son-in-law Jared Kushner on Tuesday said a deal might not come together until after the November election. Trump’s comments Wednesday suggested he wanted the matter dealt with urgently, however.

Congress passed, and Trump signed, the $2 trillion Cares Act in March, which sent $1,200 checks to millions of Americans as a way to try to contain some of the economic fallout from the coronavirus pandemic. Those checks went to more than 100 million Americans, and Trump signaled Wednesday that he wants to send another round of such checks, something Democrats have long supported.

Pelosi has said repeatedly that Democrats would offer concessions to their May proposal and agree to a more narrow package that was around $2.2 trillion. But Senate Majority Leader Mitch McConnell, R-Ky., said earlier this week that $2.2 trillion was still too high.

Despite the pressure Pelosi is now confronting, she has indicated no willingness thus far to back down and agree to a lesser deal.

“We have come down, but the needs of the American people - we can only go so far,” Pelosi said Wednesday on MSNBC. “We cannot have a Sophie’s Choice of feeding some children and not others, housing some people and not others.”