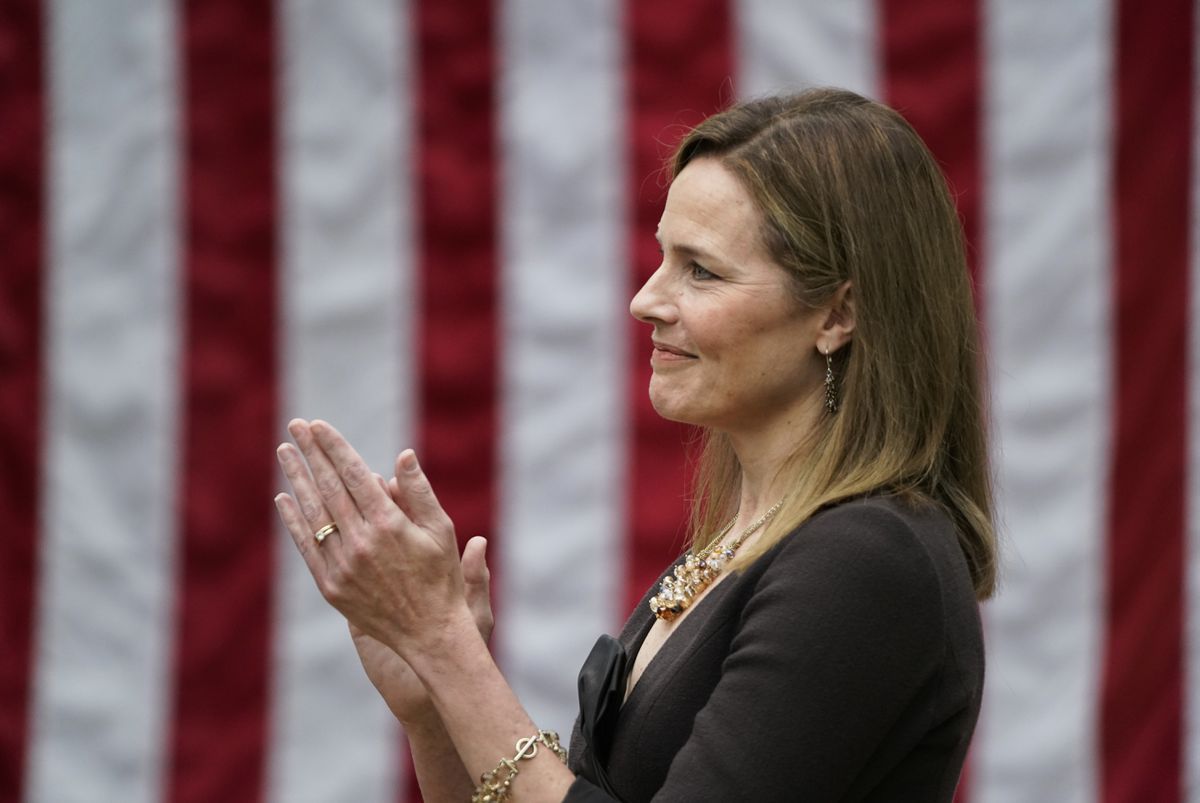 Judge Amy Coney Barrett applauds as President Trump announces her nomination to the Supreme Court on Saturday night at the White House. MUST CREDIT: Washington Post photo by Jabin Botsford

Judge Amy Coney Barrett applauds as President Trump announces her nomination to the Supreme Court on Saturday night at the White House. MUST CREDIT: Washington Post photo by Jabin Botsford

Like Scalia, for whom she once clerked, she is a committed Roman Catholic as well as a firm devotee of his favored interpretation of the Constitution known as originalism. Those qualifications delight many on the right but dismay liberals and others who fear her votes could result in the chipping away of some laws, especially the Roe v. Wade decision legalizing abortion.

In remarks moments after Trump named her, with her husband and their seven children looking on, Barrett paid homage to Ginsburg.

“I will be mindful of who came before me,” she said, citing Ginsburg’s career as a trailblazer for women’s rights. “She not only broke glass ceilings; she smashed them.”

But Barrett also highlighted how she is, in her approach to the law, a polar opposite to Ginsburg.

She said of Scalia: “His judicial philosophy is mine, too.”

Her nomination sets Barrett on the path to help conservatives hold sway over the court for decades. It’s as sure to energize the president’s base as it is to galvanize his foes heading to Election Day. Senate Republican leaders have said they have the votes to confirm her this year, likely before November’s election.

Beyond the election, Barrett’s elevation could bring a national reckoning over abortion, an issue that has bitterly divided many Americans for almost half a century. The idea of overturning or gutting Roe v. Wade, the landmark 1973 decision, has been an animating political issue exploited by both sides.

Her writings and speeches show a commitment to originalism, a concept that involves justices endeavoring to decipher original meanings of texts in assessing whether someone’s rights have been violated. Many liberals say that approach is too rigid and doesn’t allow the Constitution’s consequences to adjust to changing times.

On abortion, questions have arisen about Barrett’s involvement in organizations that vigorously oppose it. But she has not said publicly she would, if given the chance, seek to scale back rights affirmed by the high court.

Barrett has been a federal judge since 2017, when Trump nominated her to the Chicago-based 7th U.S. Circuit Court of Appeals. But as a longtime University of Notre Dame law professor, she had already established herself as a reliable conservative in Scalia’s mold.

She gained a reputation as a Scalia clerk in the late 1990s as bright and adept at picking apart poorly reasoned arguments. Ara Lovitt, who clerked with her, recalled at her investiture ceremony for the 7th Circuit that Scalia had high praise for her.

On Saturday, Barrett also referenced the close friendship between Ginsburg and fellow opera lover Scalia, saying Ginsburg showed that justices can disagree on principles “without rancor in person.”

Before becoming a judge, Barrett discussed how court precedents provide welcome stability in the law. But she seemed to leave the door open to the possibility of reversing ones about which there remained sharp disagreement.

“Once a precedent is deeply rooted,” a 2017 article in the University of Pennsylvania Journal of Constitutional Law, which Barrett co-wrote, said, “the Court is no longer required to deal with the question of the precedent’s correctness.” But it added: “None of this is to say that a Justice cannot attempt to overturn long-established precedent. While institutional features may hinder that effort, a Justice is free to try.”

Barrett and her husband, Jesse Barrett, a former federal prosecutor, both graduated from Notre Dame Law School. Their seven children include two adopted from Haiti and one with special needs.

Trump said Saturday that Barrett would be the first female justice to serve with small children. Looking at her kids in the front row, the president said: “Thank you for sharing your mom.”

Barrett would be the only justice on the current court not to have received her law degree from an Ivy League school. The eight current justices all attended either Harvard or Yale.

If she is confirmed, six of the nine justices will be Catholic.

How her religious beliefs might guide her legal views became a focus for some Democrats during bruising confirmation hearings after Barrett’s 7th Circuit nomination. That prompted Republicans to accuse Democrats of seeking to impose a religious test on Barrett’s fitness for the job.

At Notre Dame, where Barrett began teaching at 30, she often invoked God in articles and speeches. In a 2006 address, she encouraged graduating law students to see their careers as a means to “building the kingdom of God.”

She was considered a finalist in 2018 for the high court before Trump nominated Brett Kavanaugh for the seat that opened when Justice Anthony Kennedy retired. Even some conservatives worried her sparse judicial record made it too hard to predict how she might rule, concerned she could end up like other seemingly conservatives who wound up more moderate.

Three years on, her record now includes around 100 opinions and dissents, in which she often illustrated Scalia’s influence by delving deep into historical minutiae to glean the meaning of original texts.

In a 2019 dissent in a gun-rights case, Barrett argued a person convicted of a nonviolent felony shouldn’t be automatically barred from owning a gun. All but a few pages of her 37-page dissent were devoted to the history of gun laws in the 18th and 19th centuries.

When she was nominated to the appeals court in 2017, Barrett reported assets of just over $2 million, including her home in Indiana worth nearly $425,000, and a mortgage with a balance of $175,000.

In the two previous years, Barrett received $4,200 in two equal payments from Alliance Defending Freedom, a conservative Christian law firm, her financial report shows. In 2018 and 2019, she participated in 10 events sponsored by the Federalist Society, which paid for her transportation, meals and lodging in several cities.

Barrett was raised in New Orleans and was the eldest child of a Shell Oil Co. lawyer. She earned her undergraduate degree in English literature in 1994 at Rhodes College in Memphis, Tennessee.

She also clerked for Laurence Silberman for a year at the U.S. Court of Appeals for the District of Columbia Circuit. Between clerkships and entering academia, she worked from 1999 to 2001 at a law firm in Washington, Miller, Cassidy, Larroca & Lewin.