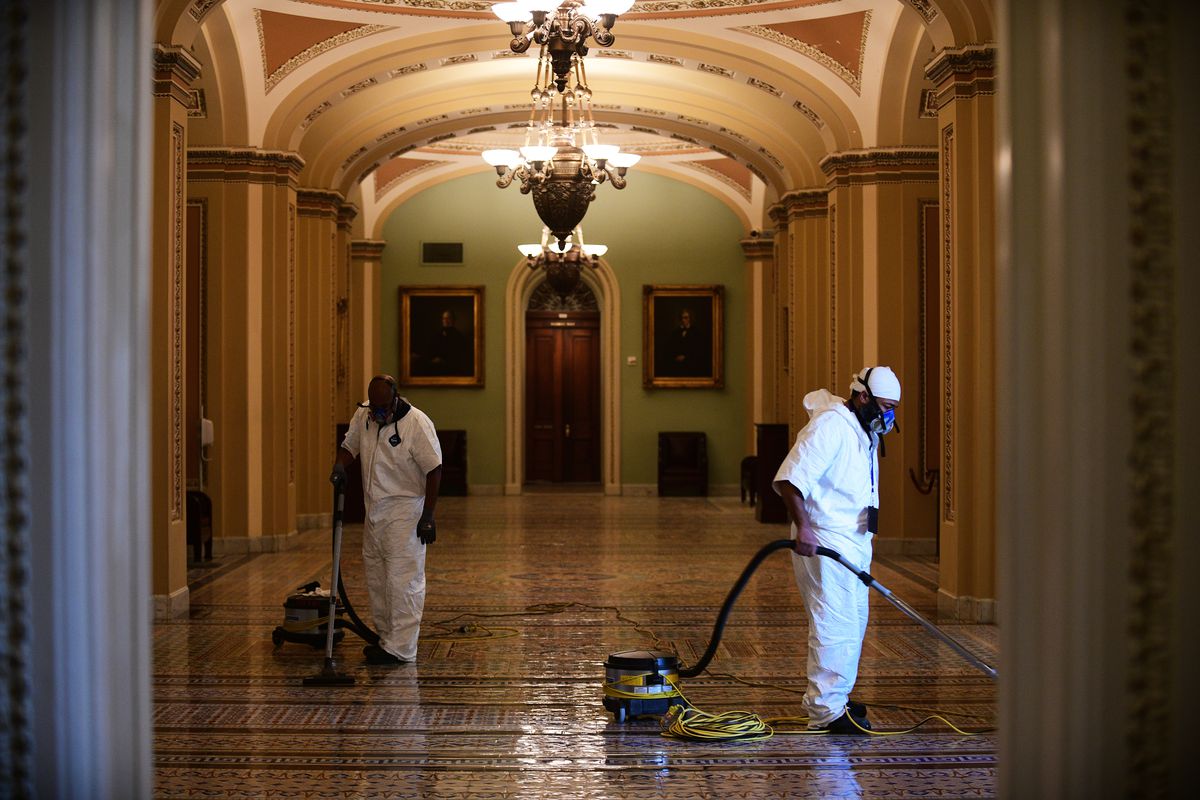 Workers clean the inside of the Capitol building one day after it was stormed, invaded and vandalized by rioters. Photo for The Washington Post by Astrid Riecken

Workers clean the inside of the Capitol building one day after it was stormed, invaded and vandalized by rioters. Photo for The Washington Post by Astrid Riecken

WASHINGTON - It was after the House had reconvened Wednesday night, and after Rep. Andy Kim, D-N.J., had voted to certify the Arizona vote for President-elect Joe Biden, that he decided to take a walk. He exited the House chamber through doors with bashed-out glass windows. He walked to the middle of the Rotunda and looked around at the remnants of the riot that had engulfed the Capitol hours earlier. There were American flags and splinters of historic furniture scattered with gloves and cigarette butts and the powdery residue left behind by fire extinguishers. The meaningful mixed with the mundane.

Kim was overwhelmed with sadness at the desecration of what he considers the most beautiful building in the country. “Under that great dome was just ransacked, just garbage and debris everywhere, all of it all over the statues, all over the floor,” he says. “It was really painful to see this room and this building that I love so much hurting.”

So he got a trash bag, and started to pick it up.

He cleaned up car keys, and Trump flags, and water bottles - as well as some alarming items such as body armor. There were some police posted nearby. “I asked the officers if it was theirs, and they said no,” says Kim. He says he found a manufacture date on the armor: It had been bought just weeks earlier, as if for this very occasion.

Kim kept cleaning. He cleaned the Rotunda, Statuary Hall, the crypt. It was 1 a.m. The litter was a testament to the violence. “There was some metal furniture that was broken, which was pretty amazing to me,” he says. “These are like, metal benches that were just broken to pieces.”

A lot of things were broken to pieces, or pilfered, or defaced. Windows and door frames. The placard above House Speaker Nancy Pelosi’s door. Camera equipment owned by the Associated Press. A photo of the late congressman and civil rights leader John Lewis, with a quote about the necessity of getting into “good trouble,” that had stood on an easel outside of the office of House Majority Leader Steny Hoyer, D-Md.

The office of the Senate parliamentarian was ransacked. A bust of President Zachary Taylor was smeared with what appeared to be blood.

Missing: Laptops from the offices of Sen. Jeff Merkley, D-Ore., Pelosi and others. Mail. Paperwork. Records that the Department of Justice referred to cryptically as “national security equities.”

“If anyone cleaning up the Capitol (or any of the hallways we were quickly moving through) spots a blue eyeglasses case with gold-rimmed glasses in them - let me know,” tweeted PBS correspondent Lisa Desjardins.

Seven pieces of historically significant art were covered in “corrosive gas agent residue,” according to a spokesperson for the Committee on House Administration, which has oversight over the House curator and the Architect of the Capitol. Those gas-doused artifacts - including a marble statue of Thomas Jefferson, marble busts of House speakers Joseph Gurney Cannon, Joseph W. Martin Jr., Thomas Brackett Reed and Champ Clark and portraits of James Madison and John Quincy Adams - were being sent to the Smithsonian for assessment and restoration. A 19th-century gold mirror in Speaker Pelosi’s office was smashed and will be repaired, per the spokesperson.

“On the West Front, the teams identified graffiti on the building near the Inaugural Stands and two broken Olmsted light fixtures,” said a spokeswoman for the Architect of the Capitol in an email. “Statues, murals, historic benches and original shutters all suffered varying degrees of damage - primarily from pepper spray accretions and residue from tear gas and fire extinguishers - that will require cleaning and conservation.”

The Capitol is a place of business but also a museum. When a window has been broken, a replacement can’t just be ordered from Home Depot. “All original materials will be used in repairs where possible,” said the spokeswoman.

During the riot, precious artifacts were paraded around as props and prizes. A Florida man in a ski cap made off with the House speaker’s lectern. A photograph of the man with his quarry quickly became iconic, a symbol of the mob’s audacity in taking what they wanted without bothering to hide their identities. (The Bradenton [Fla.] Herald later identified the man as 36-year-old Adam Christian Johnson, a furniture maker and stay-at-home dad.) A listing for the lectern briefly appeared on eBay, commanding bids of at least $56,000 before it was taken down. (“Stolen items are illegal and not allowed on eBay,” a company spokeswoman said in an email.) The postings were a hoax: The lectern, as well as a gavel, were recovered undamaged, reported the spokesperson for the Committee on House Administration.

The Antiquities Trafficking and Heritage Anthropology Research (ATHAR) Project kept a lookout online for rioters’ stolen “souvenirs.” Katie Paul, the group’s co-director, says she saw postings for the lectern on Facebook Marketplace, where the sale of stolen goods is prohibited.

“Especially with federal charges coming, people are likely going to want to get this material out of their possession,” says Paul. “But it also is going to be worth money, particularly since it’s now from a historical event.”

Because of the historic nature of the Capitol riot, the mob not only destroyed historically important artifacts but created them. As cleanup crews tended to the Capitol’s exterior on Thursday, another type of worker was sifting through the mess for salvageable items.Frank Blazich, a curator from the National Museum of American History collected signs and other ephemera from the scene. Among the objects: a sign that read, “Off with their heads: Stop the steal.” Other leavings, including pro-insurrection stickers and flags found inside the Capitol, will be preserved along with artifacts like the speaker’s damaged name plate in the House and Senate collections and shared with national museums, including the Smithsonians, said the Committee on House Administration spokesperson.

Jane Campbell, president of the U.S. Capitol Historical Society, a nonprofit chartered by Congress to inspire " informed patriotism,” says she was angry and heartbroken watching Wednesday’s events unfold on television from her Capitol Hill home.

But as soon as the siege ended, Campbell switched into historian mode. Her organization is collecting first-person accounts, videos and social media posts for what will become a digital archive of the riot. She also hopes that much of the physical detritus of the day will be saved.

“As a historian I want everything preserved,” Campbell says. “I think the people who did the attack on the Capitol are insurrectionist, immoral and bad news all the way around . . . but if they left stuff behind, it should be preserved and studied later. We have to look at, ‘What did we learn?’ "

Many members of the Capitol’s janitorial staff are people of color, and it did not go unnoticed by people scrolling through photos of the destruction online that Black and Latino custodians - plus one first-generation Korean American congressman - were the ones picking up a mess left behind by a mostly White group that included, among others, a man carrying a gigantic Confederate flag.

That didn’t enter Rep. Kim’s thoughts until later. He thought of his parents, and how they came to this country.

“When I see the Capitol defaced, I see the values and the opportunities that gave my family a chance in this country disrespected,” he says. “This building is bigger than all of us. It deserves our respect.”