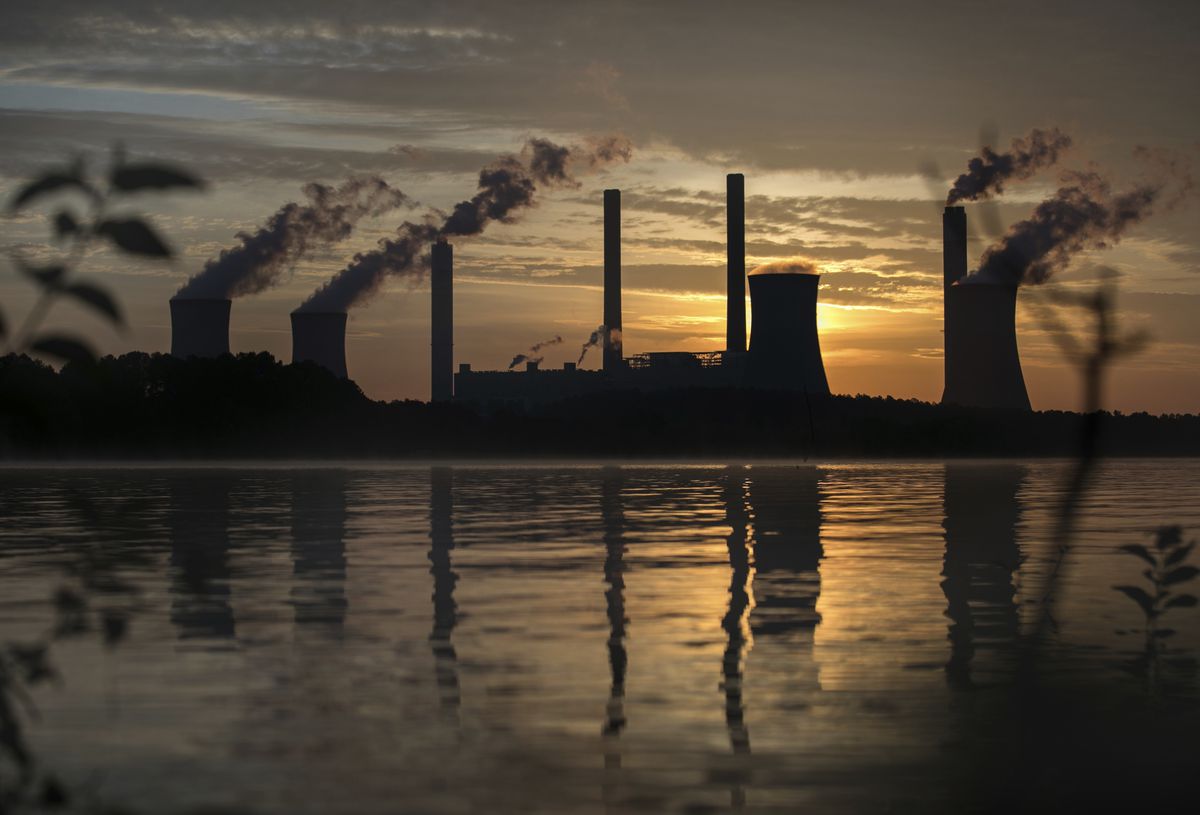 FILE - In this Saturday, June, 3, 2017 file photo, the coal-fired Plant Scherer, one of the nation's top carbon dioxide emitters, stands in the distance in Juliette, Ga.. (AP Photo/Branden Camp, file)

FILE - In this Saturday, June, 3, 2017 file photo, the coal-fired Plant Scherer, one of the nation's top carbon dioxide emitters, stands in the distance in Juliette, Ga.. (AP Photo/Branden Camp, file)

For the energy and auto industries, the impact could be far-reaching.

Biden aims to reduce harmful emissions from cars, trucks and SUVs. Oil and gas operations are being scrutinized as well — from how companies extract resources from the ground to the safety of pipelines that distribute the fuels. The new president aims to transition the country to 100% renewable energy for electricity generation by 2035 and net-zero emissions in the overall economy by 2050.

His campaign website promises to develop “rigorous” new fuel economy standards and eventually make all light- and medium-duty vehicles electric, though it provides no time frame. During his campaign, Biden also spoke about restricting oil and gas drilling on federal lands and reducing methane emissions from oil and gas operations.

Many experts agree that Biden’s actions could help the nation achieve ambitious climate goals and further enhance the renewable energy sector, driving job growth. Others say they worry more that stricter regulations could hurt companies struggling to recover from the pandemic, which decimated demand for fuel.

Hours after his inauguration Wednesday, Biden directed federal agencies to immediately review regulations and executive actions taken in the past four years that threatened public health or the environment. Ultimately, his success will require surmounting opposition in the energy industry as well as in Congress.

“Yes, we have a blue wave, but it’s a pretty thin wave with a 50/50 split in the Senate,” said Stewart Glickman, senior equity analyst at CFRA Research. “Still, this is the first presidency that is actively trying to discourage fossil fuel development while promoting renewables.

Here is look at some energy issues Biden plans to tackle:

Methane, the main component of natural gas, frequently leaks from oil and gas wells and pipelines. As it does, it exerts a powerful warming effect on the atmosphere. Methane accounted for 10% of the nation’s greenhouse gas emissions in 2018, according to the U.S. Environmental Protection Agency. And the oil and gas industry produced nearly 30% of the country’s methane emissions.

Under President Barack Obama, oil and gas operations were required to inspect equipment built or modified after 2015 twice a year for methane leaks and fix leaks that they found. Trump weakened those rules. Now, Biden is expected to restore Obama-era methane regulations. He may also extend those requirements to those older wells, which could put some operators out of business.

“Texas’ Permian Basin is one of the largest sources of methane emissions in the world,” noted Emma Pabst, an advocate with Environment Texas. “Reinstituting these rules will have a significant impact on our state’s climate and environment. Requiring oil and gas companies to address methane leaks along the production line sends a clear message that our Environmental Protection Agency is no longer giving out free passes to pollute.”

Trump’s decision to loosen methane regulations was opposed even by BP, Chevron Shell and ExxonMobil and other major oil and gas companies because they had invested heavily to reduce methane emissions. If Biden were to just reverse Trump’s rule and restore Obama’s methane regulations, it would have little impact. That’s because many big companies already tightened their methane leak prevention techniques.

But Biden may extend the methane regulations to older wells. That worries independent producers, especially those that operate “stripper wells” that produce just a barrel or two of oil a day, that the expense of controlling methane leaks could put them out of business.

“We are very concerned about, especially for our members, our independent producers, that if there’s a heavy Washington-bound approach that handcuffs the industry from finding solutions to this methane question, that would be a mistake,” said Dan Naatz of the Independent Petroleum Association of America.

Low-producing stripper wells could become uneconomical through high compliance costs if these rules were expanded, and the move would certainly face legal challenges, said Parker Fawcett, an analyst for S&P Global Platts.

The new administration intends to undo one of Trump’s biggest changes: His gutting of Obama-era fuel economy and greenhouse gas emissions standards for automobiles through 2025. But the regulatory slog could take a couple of years unless Trump’s rollbacks are thrown out by the courts. Biden will also likely reverse Trump’s decision to revoke California’s ability to set its own pollution standards.

David Friedman, a former acting administrator of the National Highway Traffic Safety Administration, one of the agencies that sets such auto standards, said he thinks it will take until the 2023 model year for stricter standards from Biden to take effect. The Trump administration cut Obama-era standards for model years 2021 to 2025 from 4.7% annual fuel efficiency gains to 1.5%, weakening one of the nation’s biggest efforts to fight climate change. Trump contended that the changes would make cars more affordable and safer. Both points were disputed by environmental groups.

The rollback was largely supported by the auto industry, though Ford, BMW, Volkswagen, Honda and Volvo backed California for what amounted to 3.7% annual fuel efficiency increases. Many in the industry think the agreement with California is where bargaining will begin with the Biden administration.

Automakers have long maintained that they would have trouble meeting Obama-era standards if they aren’t rolled back. The industry has said it supports increased standards but that because people are buying less-efficient SUVs and trucks, it would have trouble reaching the Obama numbers. Last year, 76% of the new vehicles sold in the U.S. were trucks and SUVs.

During the 2019 model year, 11 of 14 major automakers had to rely on regulatory credits because they didn’t meet standards, according to EPA figures. Gas mileage declined and pollution went up in 2019 for the first time in five years.

The industry knows change is coming and is hoping for a settlement. It is “committed to working with President Biden and his team on our shared goals of reducing emissions and realizing the benefits of an electric future,” said John Bozzella, CEO of the Alliance for Automotive Innovation, a trade group.

Friedman, now with Consumer Reports, says the industry already has the technology already to meet the Obama-era standards, even without a plethora of battery-powered electric vehicles that are coming to market. A Consumer Reports analysis of Trump’s rollback found that it would increase fuel costs during the life of an average new vehicle by $3,200.

“There’s a lot of room to for this administration to lead this country forward, save consumers money and clean the air,” Friedman said.

Biden directed the Interior Department to halt all leasing for oil and natural gas exploration in the Arctic National Wildlife Refuge. But his ambitions were broader. He also ordered a 60-day moratorium on new oil and gas leasing and drilling permits on federal land, as part of a review of Trump-era rules that were designed to accelerate such activity.

Some energy analysts suggested that the moratorium could be just the first step in a much larger agenda to end drilling on federal land.

Speculation alone had already sparked a flurry of activity. In the waning months of the Trump administration, companies began stockpiling permits to drill on federal land, and the federal government sped up approvals to help the industry.

“All a leasing ban will do is shift production to Saudia Arabia and Russia, which have far less-stringent environmental controls than American producers,” Naatz said.

Among his first executive orders, Biden revoked the permit for the Keystone XL pipeline, the 1,700-mile pipeline that was to carry oil from Alberta, Canada to the Texas Gulf Coast. Keystone XL began shutting down construction, and the company said it would eliminate more than 1,000 jobs in coming weeks.

The pipeline had been a symbol of struggle between the goals of preserving jobs and curtailing global warming. Trump had presided over an expansion of the nation’s oil and gas pipeline network. But legal setbacks chipped away at his progress.

Biden’s plans to apply a swift hammer to Keystone XL and reverse Trump administration roll-backs indicate that “any hope of Biden moderating his posture towards the industry once in office are now dashed,” said Fawcett, the analyst for S&P Global Platts.

Environmentalists and Native American tribes had opposed the pipeline, arguing that new infrastructure for fossil fuels would worsen climate change. “We should invest in infrastructure that helps us build a cleaner and healthier America, not infrastructure that ties us to the dirty energy sources of the past,″ said Matt Casale of U.S. PIRG, a federation of nonprofits.

The American Petroleum Institute assailed Biden’s actions on Keystone as a step backwards that would hurt union workers.

“Pipelines are the safest, most environmentally friendly way to transport energy, and the economy cannot recover at full speed unless we deliver reliable energy from where it is to where it is needed,” said Mike Sommers, the institute’s CEO.

The president directed the Interior Department to review rules that are designed to prevent blowouts on offshore oil rigs. The Obama administration had adopted safety measures after the BP Deepwater Horizon disaster that killed 11 and spilled 134 million gallons of oil into the Gulf in 2010.

After that tragedy, Obama required companies to test blowout preventers, which are designed to seal a well in case of a blowout, every 14 days. Trump relaxed that standard to every 21 days. But deep-water exploration has expanded in recent years, even as safety inspections declined.

Environmentalists have been pushing for more frequent inspections, said Nancy Kinner of the University of New Hampshire’s Coastal Response Research Center and Center for Spills and Environmental Hazards.

“The new administration’s whole thought on this is really to go back and look at that and make sure it’s rigorous enough,” Kinner said.