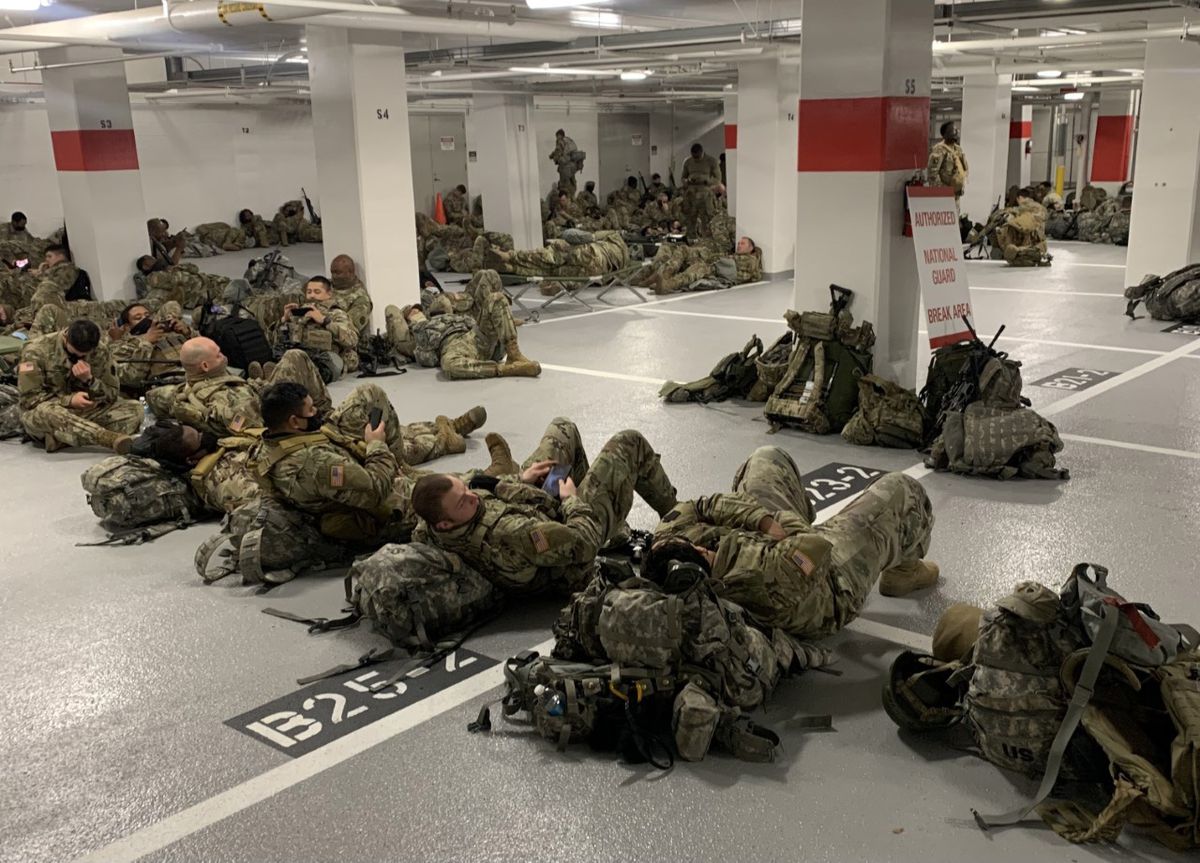 WASHINGTON - Hundreds of National Guard members forced from the U.S. Capitol and into a parking garage Thursday night were allowed to return indoors to rest, defense officials said Friday, after photos of soldiers lying on concrete prompted outrage from lawmakers.

The abrupt transfer came Thursday afternoon with no explanation, two soldiers told The Washington Post. The troops were using space at the Capitol to relax in between guard shifts, but relocating to the parking garage put them in close quarters with moving cars, exhaust fumes, few toilets and troops potentially infected with the coronavirus, the soldiers said.

The D.C. National Guard said Thursday that the Capitol Police moved the Guard members off the grounds as foot traffic from lawmakers and other officials increased in the area, but that was contradicted by acting Capitol Police Chief Yogananda Pittman, who said in a statement Friday that “police did not instruct the National Guard to vacate the Capitol Building facilities.”

National Guard officials did not resolve the contradiction in a Friday statement but denied allegations made on social media that the request originated from lawmakers.

The Guard members have hotel rooms, but soldiers are on duty for a day or two, working shifts a few hours at a time, and cannot easily return to their hotels, many of which are in Virginia and Maryland. So they nap wherever they can - on concrete, indoor tennis courts or carpeted floors.

Two soldiers who spoke to The Washington Post estimated that hundreds of troops were moved to the garage as officials struggle to find places to put thousands of service members. Nearly 26,000 National Guard members arrived after the Jan. 6 Capitol riot to help secure Wednesday’s presidential inauguration. More than 10,000 remain on duty, while 15,000 others were slated to return home in the coming days, defense officials said Thursday.

“I’ve ordered the immediate return of all New Hampshire National Guard from Washington DC. They did an outstanding job serving our nation’s capital in a time of strife and should be graciously praised, not subject to substandard conditions,” New Hampshire Gov. Chris Sununu, R, said Friday in a tweet, though it is unclear if troops from his state were already set to return.

The two soldiers, who are noncommissioned officers in the Maryland National Guard, said troops inhaled exhaust fumes, shared few toilets with hundreds of soldiers and struggled to sleep under the harsh fluorescent lights.

“I’ve never in my entire career felt like I’ve been booted onto the curb and told, ‘Figure it out on your own,’ " said one of the soldiers, who said he had served in Iraq and Afghanistan. Both spoke on the condition of anonymity because they were not authorized to speak with reporters.

“This is absurd,” said the other soldier, who said one of his men was nearly struck by a car.

Some Guard members said the conditions were not as bad as suggested on social media. One member of the Wisconsin National Guard said they have rested in the garage between their shifts for days. It is uncomfortable, but there are not many places to easily put thousands of soldiers in the District, he said.

“I have told those who run the security of the Capitol that it can never happen again, and I pledge to every National Guard member that it will not happen again,” Senate Majority Leader Chuck Schumer, D-N.Y., said from the Senate floor Friday.

The chairman of the Capitol Police officers’ union, Gus Papathanasiou, said Friday that since Jan. 6, 19 officers have had confirmed positive tests for the coronavirus. He said the Capitol Police chief’s office had provided the information on the number of cases. A spokeswoman for the Capitol Police did not respond to messages seeking comment Friday.

Both Maryland soldiers said austere quarters are realities of the profession. But these conditions, they said, unnecessarily hamstring their duties. Their spaces have few electrical outlets to charge smartphones, they said, which are used for mission planning and to keep in contact with one another.

One portable toilet used by soldiers was overflowing onto the sidewalk, a photo obtained by The Post shows.

A defense official, speaking on the condition of anonymity because of the sensitivity of the issue, said on Friday that there is planning underway that would have some 7,000 Guard members at work in Washington through at least mid-March. That plan was first reported on Friday by Military.com.

The official said that coronavirus cases among the thousands of Guardsmen continue to climb, pushing some of them into isolation in hotel rooms in the region. The D.C. National Guard was aware of at least 170 cases as of Friday, with more positive results expected.

One of the Maryland soldiers said he personally knows several others who have been infected. He laughed when asked by a reporter to describe protocols in place to mitigate spread of the virus.