Analysis: On a day of legal wrangling, the trauma of Jan. 6 becomes the centerpiece of Trump impeachment trial 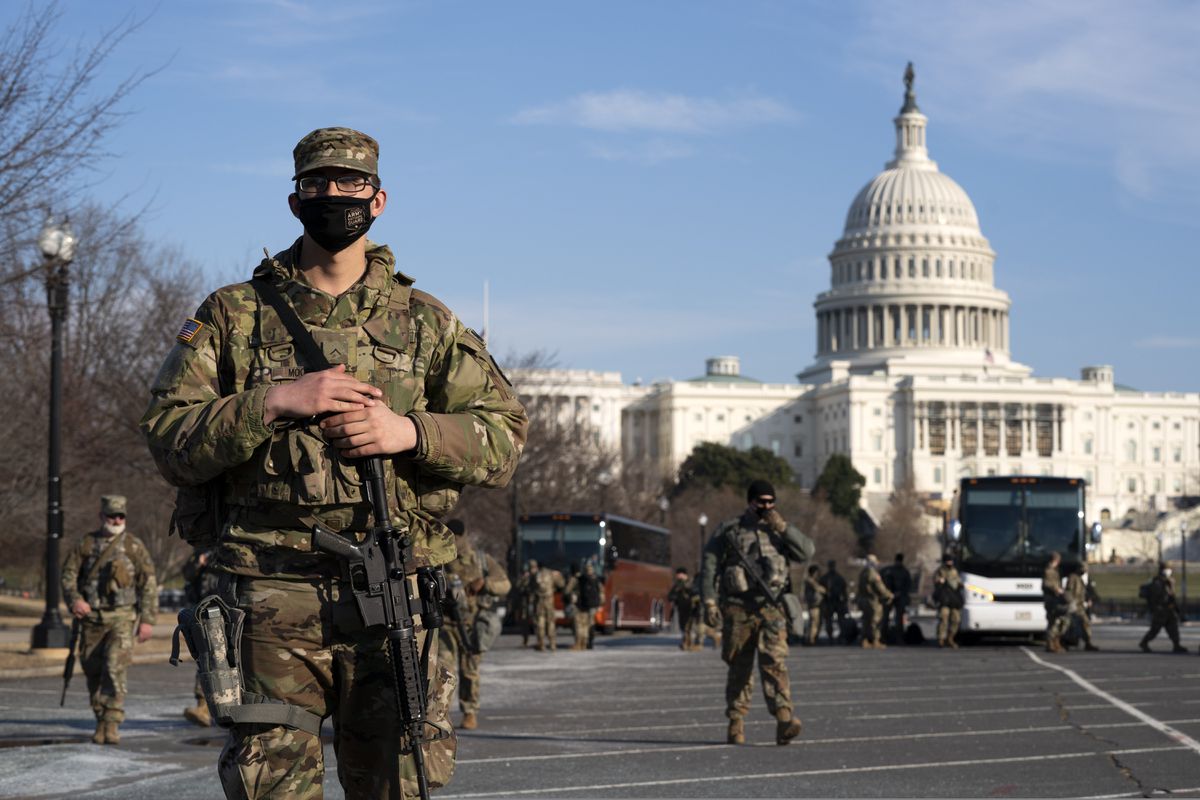 Members of the national guard patrol the area outside of the U.S. Capitol during the impeachment trial of former President Donald Trump at Capitol Hill in Washington, Tuesday, Feb. 9, 2021. (AP Photo/Jose Luis Magana)

Members of the national guard patrol the area outside of the U.S. Capitol during the impeachment trial of former President Donald Trump at Capitol Hill in Washington, Tuesday, Feb. 9, 2021. (AP Photo/Jose Luis Magana)

The second impeachment trial of former president Donald Trump opened Tuesday heading toward what seemed a preordained conclusion. But as the day revealed, the events that led to this moment - Trump’s efforts to overturn an election and his role in inciting a mob that attacked the Capitol - will have left an indelible mark on his presidency and on the history of the country, no matter the trial’s outcome.

The first day had been set aside for what some anticipated might be a dry constitutional argument over whether the Senate had the authority to conduct a trial for a president who is no longer in office. That debate did provide the backdrop, but the horrors of Jan. 6 became the emotional centerpiece and highlight of the day - and, no doubt, the days to come.

House managers, led by Rep. Jamie Raskin, D-Md., presented a powerful opening argument - asserting with historical documentation and contemporary legal analysis that the Senate must go ahead with the trial, lest it create a “January exception” to impeachment that could allow future presidents to rampage at will in their final days n office without fear of being held accountable.

More compelling, however, was the video Raskin offered up to the senators in the first minutes of his presentation, a wrenching highlight reel of the brutality of the storming of the Capitol interspersed with what Trump said and tweeted during and after the attack, along with his final, moving reflections of being in the Capitol that day with members of his family.

There will be more of that in the coming days, more video highlighting the anger of the mob; the viciousness of their assaults; the killing of a Capitol Police officer; the scores of other law enforcement officers who were injured; as well as the fears of lawmakers and their staff members trapped in the Capitol as the marauders roamed the corridors, breaking down doors, smashing windows, rummaging through personal papers and breaking into the Senate chamber.

Americans - and the senators acting as jurors - will also be reminded of the worst of what might have happened, from the possible decapitation of the government’s top leadership to the potential for hostage-taking, even to more wanton destruction of America’s symbol of democracy. And they will be told repeatedly what Trump said and did, not only on Jan. 6 but in all the days after Nov. 3 as he sought to subvert the outcome of an election won by Democrat Joe Biden.

All of it will be done not just to replay the events of Jan. 6, but to appeal as much as possible to the consciences of Republican senators who were in the Capitol during the attempted insurrection, to ask them to set aside any feelings they may have that all this is merely a partisan attack by the Democrats, as Trump’s attorneys contend, and instead to hold the former president accountable.

The record of Trump’s presidency is replete with misconduct - the chaos and volatility of his behavior, the ever-changing cast of advisers who could not restrain his worst impulses, the lies and distortions, the attacks on political adversaries, the efforts to undermine public institutions and democracy itself.

This trial, however, will highlight Trump’s conduct after he was defeated, and just how dangerous his actions turned out to be. No president ever did what Trump sought to do, and that, ultimately, is what brought about his second impeachment and the demands for accountability, including that he be disqualified from ever holding federal office again.

The first day underscored how different this trial will be when compared with the first one that ended just a year ago. The sacking of the Capitol, an attack that was broadcast live to a shocked nation and that members of Congress witnessed firsthand, bears no comparison to arguing a case involving a telephone call between Trump and the president of Ukraine and a brazen demand that the Ukrainian leader dig up dirt on Biden in exchange for badly needed aid to that country.

In that trial, there were no videos, no tape recordings of that or any other phone call, little direct testimony about what Trump said or meant - though there was considerable evidence offered up by those around him that was damning.

Here, the record is full, from the videos the House managers have been putting together to the audio of a phone call between Trump and Brad Raffensperger, Georgia’s secretary of state, in which Trump badgered Raffensperger to find enough votes to overturn the election result in his state.

The opening day of this trial also proved a mismatch between the House managers and Trump’s legal team. In addition to highlighting the attack on the Capitol, the House managers methodically sought to demolish the argument that a former president cannot face an impeachment trial. Even Trump’s team acknowledged the quality of the House managers’ argument.

In contrast, Bruce Castor, Trump’s lead attorney, offered a rambling and unfocused argument that fell well short of a direct rebuttal. David Schoen, another member of the Trump team, was left to argue that the Constitution does not allow for a former president to be subjected to a trial once out of office. Beyond that, he claimed that Democrats were looking to disqualify Trump from future office because they feared he would run again and win in 2024.

The assertion that the Senate cannot try the former president offers a convenient escape hatch for Republican senators who might be privately appalled by Trump’s role in the attack on the Capitol but who are not willing to vote publicly to convict him for those deeds.

Most Republican senators tipped their hands two weeks ago when 45 of them voted to support a motion by Sen. Rand Paul, R-Ky., challenging the constitutionality of the trial. On Tuesday, Republicans held firm again on this question, with 44 voting to say that such a trial is not constitutional. But 50 Democrats and six Republicans voted to proceed, with each side now having 16 hours to make their arguments about the substance of the impeachment article declaring that Trump incited an insurrection.

In the first trial a year ago, just one Republican senator, Mitt Romney of Utah, voted to convict Trump on one of two counts. There could be more Republican votes for conviction in this trial than a year ago, though no one is predicting that there will be enough to threaten the former president with conviction.

In the days immediately after Jan. 6, Republicans were pointed in their criticism of Trump’s words and actions, even if they were reluctant to support impeachment. Since then, Trump has consolidated his position as leader of the Republican Party. That, too, is part of his legacy, a continuing hold on his party in the face of not one but two impeachments.