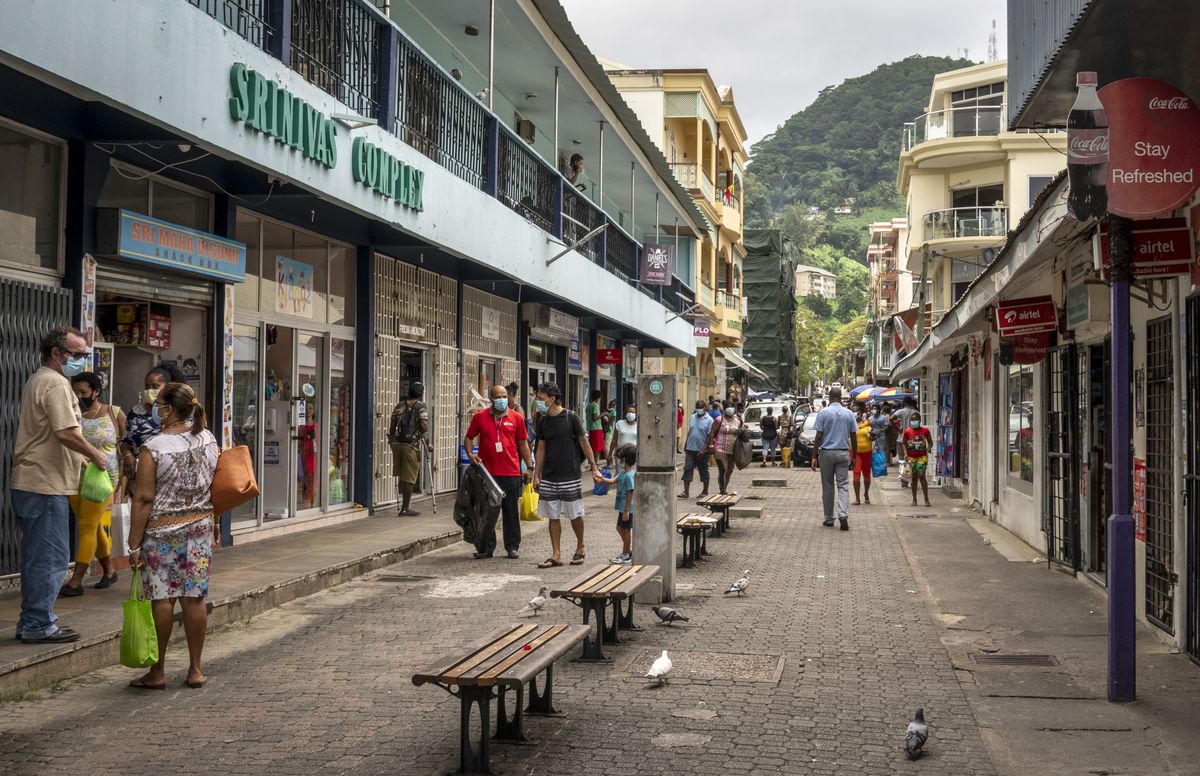 Pedestrians wear masks as they walk on a street in the capital Victoria, Mahe Island, Seychelles. (AP Photo/Salim Ally)

Pedestrians wear masks as they walk on a street in the capital Victoria, Mahe Island, Seychelles. (AP Photo/Salim Ally)

As the Seychelles began to offer free coronavirus vaccinations early this year, President Wavel Ramkalawan told reporters that the country was planning to reach herd immunity within weeks.

It was an ambitious target for a small, geographically isolated island nation in the Indian Ocean. But with its economy heavily reliant on tourism, the country called in favors to attain a vaccine supply from regional allies, including India and the United Arab Emirates.

The effort initially seemed to be a success. The Seychelles stands as the most vaccinated nation on Earth, with more than 60% of its population fully vaccinated, more than other vaccine giants such as Israel and Britain, and almost twice the United States’ rate of vaccination.

But that success has been undermined this week as the Seychelles has found itself with its largest number of new coronavirus cases per capita, and has been forced to reinstate a number of restrictions.

Though the number of new cases is relatively low - peaking at an average of just over 100 new cases a day - they are a big deal in a country with a population of less than 100,000. On a per capita basis, the Seychelles outbreak is worse than India’s raging surge.

In a small country, even a small number of cases can be overwhelming.

With the country’s main treatment center for covid-19 patients nearing capacity and doctors and nurses among the sick, the Seychelles announced the return of coronavirus restrictions, school closures and limited opening hours for shops and restaurants.

“These are an upward trend,” said Public Health Commissioner Jude Gedeon at a media briefing Tuesday. “We do not know how long it will last, but this will depend on what measures are taken and how the new measures are respected.

The Seychelles situation is being watched all over the world for what it says about the effectiveness of vaccines.

“It is providing a critical case to consider the effectiveness of some vaccines and what range we have to reach to meet herd immunity,” said Yanzhong Huang, a senior fellow for global health at the Council on Foreign Relations.

Huang noted that other nations that had vaccinated large proportions of their populations, including Israel and Britain, had seen significant drops in new daily cases.

Sherin Francis, chief executive of the Seychelles tourism board, said that while much of the population was vaccinated, there were pockets that were not.

Government data released this week found that of 1,068 active cases, around 65% involved residents who were either completely unvaccinated or had received only one dose.

Francis emphasized that even people who have been vaccinated can get infected. “Vaccines are very effective at preventing serious illness and death; they are less good at preventing infection,” Francis said.

So far, the number of deaths in the Seychelles attributed to the virus is relatively low - 28 out of more than 6,000 cases. But the surge in new cases may also confirm that the vaccines being used in the country have comparatively low effectiveness.

Roughly 60% of the doses administered in Seychelles are vaccines made by the Chinese company Sinopharm that were donated to the Seychelles by the United Arab Emirates. The remaining doses are of the vaccine developed by AstraZeneca and produced by the Serum Institute of India.

In many ways, Seychelles government negotiations for vaccine supplies were savvy and speedy. But the country has ended up using two vaccines that appear to be less effective against symptomatic covid-19.

The World Health Organization had recently estimated the efficiency of the Sinopharm vaccine at just over 78% for adults under 60, with little data on its success with older patients.

The UAE has asked some who received the Sinopharm vaccine to return for third doses, citing low immune responses, though officials said only a “very small number” need to do so.

Meanwhile, U.S. trials of AstraZeneca have found that the vaccine is 79% effective overall. Both vaccines are considerably lower in effectiveness than the vaccines developed by Pfizer and Moderna, which use mRNA technology and have reported effectiveness rates of around 95%.

Jennifer Huang Bouey, an epidemiologist who works with the Rand Corp., estimated that given what was known about the Seychelles’ vaccine rollout and the vaccines used, less than 49% of the population could be assumed to have immunity conferred by vaccines.

“Less than half of the population is protected by the vaccine,” Huang Bouey said. “It is still far below the community-level protection requirement.”

The return of tourists

That rise in cases arrived after something else: the return of tourists to the Seychelles. But so far, the evidence linking the two is unclear.

After almost a year of strict border controls, the Seychelles announced early this year that it was opening back up to tourists beginning March 25. The government said there would be no quarantine requirements and that visitors would not need to be vaccinated, though they would need to show negative PCR tests taken less than 72 hours before travel.

It was an important move for the Seychelles, which relies on tourism for about a quarter of its economy. Economic output declined by 13.5% in 2020, largely because of steep drops in tourism revenue, according to the World Bank.

While the number of new daily coronavirus cases has more than doubled since tourism restrictions were removed, only 10% of positive cases are among visitors to the island, according to Sherin.

Even so, the rise in new cases threatens to upend the country’s reopening to tourism. In one recent dispute, vaccinated Israeli travelers publicly complained of “false positive” coronavirus tests that disrupted their stay.

“While applying restrictions, care has been taken to ensure that the visitor experience is not affected and that our visitors are still able to enjoy an uninterrupted holiday in Seychelles,” said Francis, adding that the country was able to guarantee PCR tests with results within 24 hours.

Huang Bouey said that while vaccines can help prevent deaths, there was increasing agreement among medical professionals that they alone could not stop new cases or outbreaks.

“Quarantine, mask-wearing and crowd-avoiding should be part of the public health strategy,” she said.

Senaratne said it was possible that the Seychelles’ ongoing outbreak could drive away tourists and that the government was undertaking a “delicate balancing act between health and wealth management.”

“Covid-19 has starkly outlined the vulnerabilities of an island nation that remains highly dependent on tourism,” she said, adding that the country would need to diversify its economy. “While we hope the spread of the virus will be curbed in the short term, we cannot help but look uneasily towards the future.”