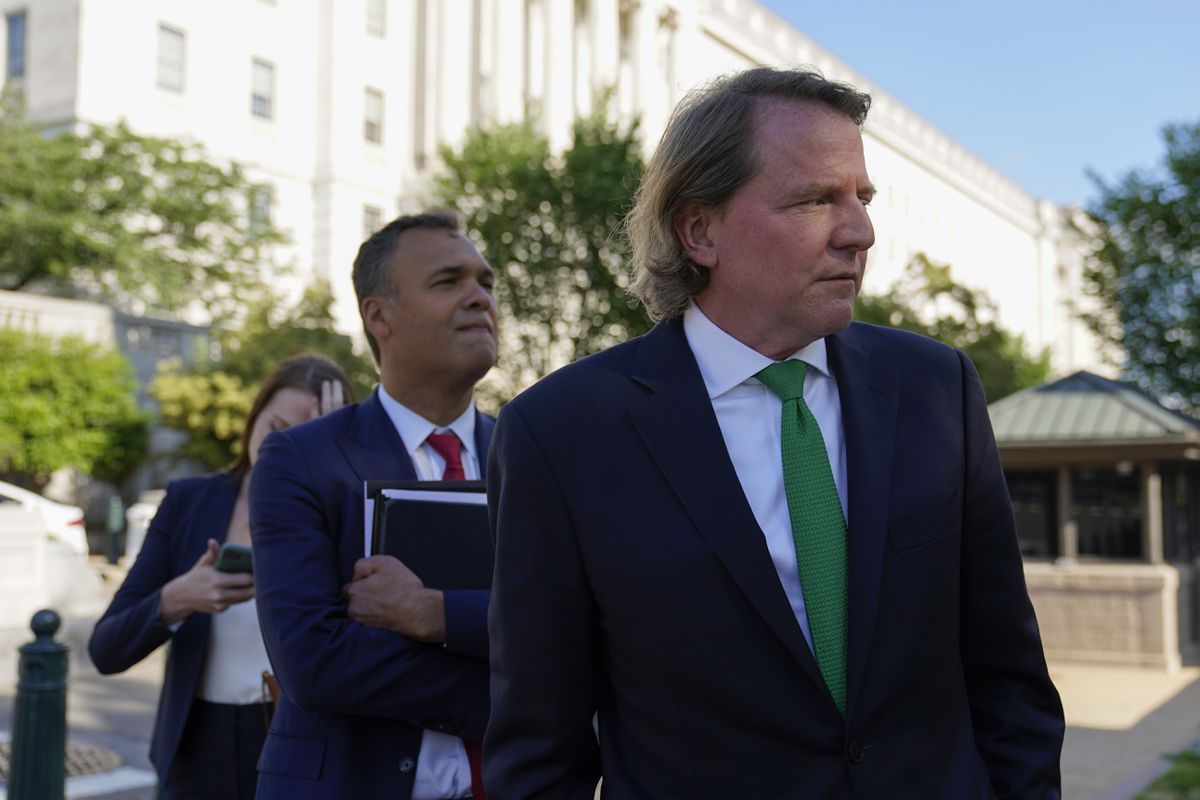 WASHINGTON - Former White House counsel Donald McGahn told lawmakers last week that he was seeking to avoid “a chain reaction that would be not in anyone’s interest” when he ignored President Donald Trump’s direction to fire the special counsel investigating Russia’s interference in the 2016 election, according to a transcript of his closed-door testimony released Wednesday.

The exchange, which clung closely to the accounts McGahn gave to former special counsel Robert Mueller III as part of his Russia probe, came after a two-year court battle for McGahn’s testimony. McGahn was one of the first White House officials House Democrats subpoenaed in 2019 in connection with Trump’s first impeachment, but the administration resisted. His appearance on Capitol Hill on Friday was the product of a deal between lawmakers and the Biden administration that ended any further appeals.

In Mueller’s 2019 report, McGahn, the witness it cites most frequently, revealed how Trump had asked him to help orchestrate Mueller’s firing, and later, to lie about it. During his interview with lawmakers, McGahn neither disputed any of his previous statements - nor downplayed how serious the implications would have been had he obeyed. But McGahn repeatedly and oftentimes testily refused to elaborate on points he made in Mueller’s report, pleading that his memory of events from more than four years ago was hazy.

“You’re putting me back four years and trying to remember what was going through my mind,” he protested at one point in the interview, which lasted almost eight hours. “I think the report gives more than I remember sitting here.”

Still, with a copy of the report before him, McGahn did explain his reasoning behind certain key actions, beginning with why he never called Rod Rosenstein, the deputy attorney general at the time, to discuss removing Mueller.

“If I, as counsel to the President . . . conveyed an urgent message about the need for the Special Counsel to not be permitted to serve because of conflicts, that could cause Rosenstein to think he was being ordered to do something that he would find contrary to his oath of office,” McGahn said, according to the transcript.

He also acknowledged to lawmakers that he was concerned about potential legal liability if he worked to have Mueller removed.

“I did not want to insert myself into something that would cause me to be my own - that would compromise my own ability to remain as counsel,” McGahn said.

But as McGahn identified Trump’s directive as a potential “point of no return,” even likening it to the Nixon administration’s “Saturday Night Massacre,” he refused to condemn Trump or impugn the former president’s actions as illegal.

“I don’t recall the President ever wanting anyone to go against the law, no,” he told lawmakers.

When asked why he finally resigned as White House counsel in October 2018, McGahn still made no reference to the strain in his relationship with Trump, the subject of extensive news coverage at the time. Instead, he replied simply, “It was time to leave.”

Despite his disciplined and at times bristling refusal to pillory the former president, glimpses of McGahn’s disappointment with his onetime boss nonetheless came through. At one point, a counsel for the Democrats asked McGahn about his reaction upon learning that Trump had referred to him as a “lying bastard.”

“Disappointing,” McGahn replied. “Because it’s not true . . . because I’m not a lying bastard.”

McGahn also rejected an opportunity to describe Mueller’s team as biased or out to get Trump - a narrative Trump has repeatedly advanced. Asked about his interactions with the prosecutors and investigators, he said they had been “very professional, very respectful.”

“With the folks I dealt with, I didn’t get a sense that the fix was in with respect to what was going on or not going on in the White House,” he said.

Democrats and Republicans who listened in on McGahn’s interview were bitterly divided over its significance.

“All told, Mr. McGahn’s testimony gives us a fresh look at how dangerously close President Trump brought us to, in Mr. McGahn’s words, the ‘point of no return,’ " House Judiciary Committee Chairman Jerrold Nadler, D-N.Y., said in a statement accompanying the transcript’s release.

But in a separate memo, Republican committee staffers characterized McGahn’s testimony as an effort “to rehash the facts and re-litigate the conclusions” of Mueller’s report that ultimately showed “that President Trump and his Administration acted appropriately, ethically, and within legal bounds.”

“Don McGahn testified he observed no collusion with Russia, no obstruction of justice, and no criminal activity during his time as White House Counsel,” the GOP memo reads. “The testimony of McGahn - whom the Democrats called the ‘most important witness besides President Trump in their investigation’ - affirms the President’s reasonable frustration with the probe.”

It is unclear what happens on the heels of McGahn’s testimony. It is too late for his interview to inspire or substantiate obstruction of justice charges against Trump, as it might have if McGahn had responded to the subpoena for his testimony when it was issued. Because McGahn’s testimony took place behind closed doors, it is also unlikely to have the political impact that might have resulted from similar, public testimony.

Still, in recent days, lawmakers have undertaken bipartisan discussions about how to strengthen the efficacy of congressional subpoenas.

McGahn’s is the third case in recent years in which a presidential administration has frustrated Congress’s attempts to secure testimony by claiming a sweeping degree or privilege or immunity. Last year, House Democrats introduced a bill to expedite the consideration of congressional subpoenas in federal courts as part of a package of reforms to reduce presidential abuses of power.

The legislation, presently the subject of discussions with the White House, has yet to be put to a vote in either chamber of Congress.