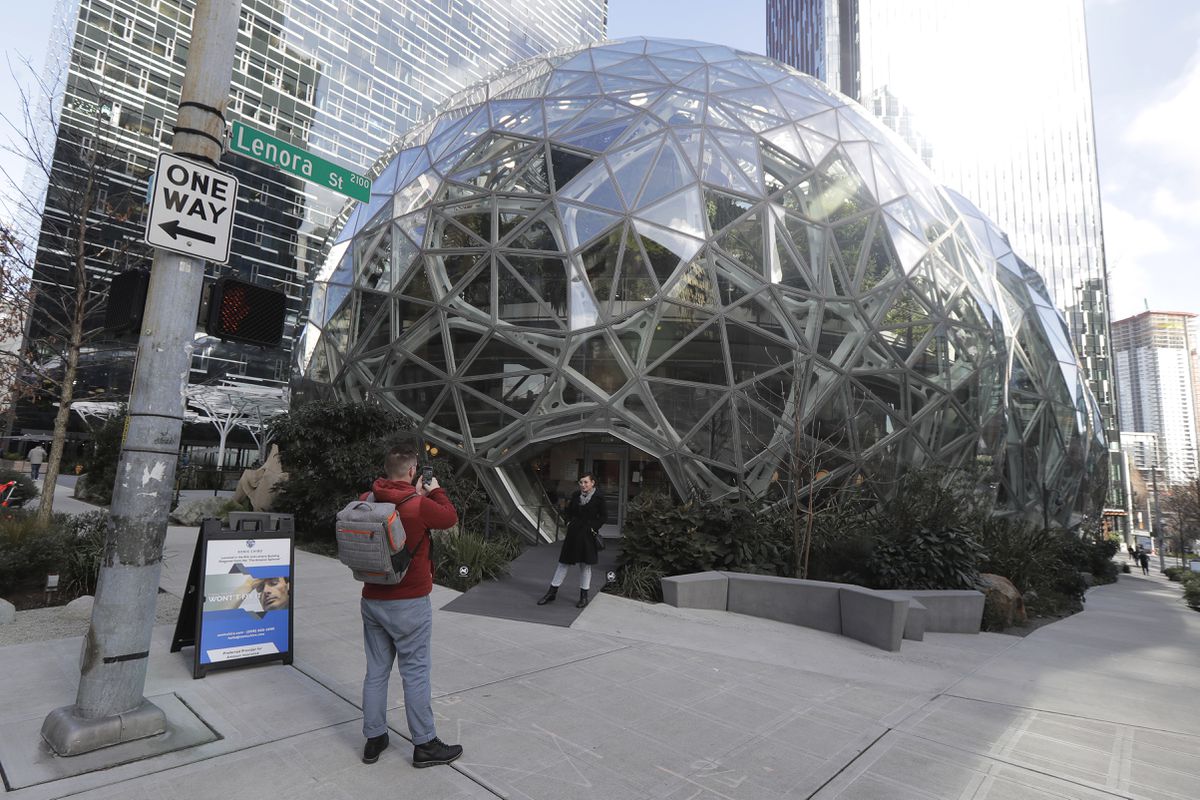 A tourist takes a photo of his partner in front of the Amazon Spheres at the company headquarters in Seattle. (AP Photo/Ted S. Warren)

A tourist takes a photo of his partner in front of the Amazon Spheres at the company headquarters in Seattle. (AP Photo/Ted S. Warren)

SEATTLE -- Amazon systematically attempts to channel 6% of its office employees out of the company each year, using processes embedded in proprietary software to help meet a target for turnover among low-ranked office workers, a metric Amazon calls “unregretted attrition,” according to internal company documents seen by The Seattle Times.

The documents underscore the extent to which Amazon’s processes closely resemble the controversial management practice of stack ranking —in which employees are graded by comparison with each other rather than against a job description or performance goals — despite Amazon’s insistence that it does not engage in stack ranking. The documents also highlight how much of Amazon’s human resources processes are reliant on apps and algorithms, even among the company’s office workforce.

The policies described in the documents reviewed by The Seattle Times apply to the company’s office workforce, who comprise a minority of Amazon’s roughly 950,000 U.S. employees. Amazon’s warehouses replace workers much more frequently, The New York Times has reported: Before the pandemic, annual turnover rates at Amazon warehouses reached 150%.

Amazon said some of the documentation reviewed by The Seattle Times was not created by the company’s central human resources team and contains outdated terminology. But it did not dispute that the documents describe Amazon’s internal policies.

“We do not, nor have we ever, stack ranked our employees. This is not a practice that Amazon uses,” said spokesperson Jaci Anderson, in an email. She said the goal of the company’s performance review process is to “give employees more information and insights to continue to grow in their careers at Amazon.”

Experts familiar with Amazon’s processes disagreed with the company’s stance that it does not stack-rank employees. Previous reporting by Business Insider has also found that Amazon grades employees on a curve.

Amazon’s performance-review system “forces [the company] to find the flaws in people as opposed to looking at their strengths,” said longtime tech industry recruiter Chris Bloomquist, co-founder of Seattle’s The Talent Mine. “If I have 10 brilliant people, but the least-brilliant person is fireable? That’s stupid.”

The company’s insistence that it does not practice stack ranking is “a bold-faced lie,” Bloomquist said.

Many companies have abandoned stack ranking in recent years after employee backlash. Critics of the system contend it contributes to pay and promotion discrimination, generates a toxic workplace culture and harms innovation. Microsoft ditched the practice in 2013. GE, whose former CEO Jack Welch is known as the originator of the stack ranking system, abandoned it in the early 2000s.

An Amazon Web Services director, who asked not to be named because he is not authorized to speak to the media, said the company resumed tracking how many low-ranked employees left the company in part to prompt managers to devote time to addressing underperformance issues among their subordinates.

“It’s the old stack ranking with a new, automated twist to it,” said Anna Tavis, a New York University professor of human capital management, responding to a description of the documents’ contents. “They’re automating the most important management function: employee development and coaching, helping people get better and perform.”

Amazon recommends that managers of teams of more than 50 people distribute performance ratings on a curve, with 20% of employees rated “top tier,” and the lowest-performing 5% rated “least effective,” according to images of presentation slides for a training given to managers seen by The Seattle Times. The presentation is undated but appears to be from late 2020 or early this year, based on slides describing the 2021 performance review timeline.

Through the company’s internal personnel dashboard, called Ivy, Amazon’s human resources department requires managers to “initiate documented coaching” with low-ranked employees or else see the issue elevated to their boss, according to the presentation.

Ivy is “the single most-trafficked site” within the company, with three million hits daily, according to a recent Amazon job posting. Ivy launched roughly 18 months ago, according to Anderson, but its existence has not been previously reported.

The presentation cautions managers to “avoid unnatural acts that would undermine the fairness or credibility” of the performance review system, such as “adjusting performance or potential ratings to shift [a higher-ranked] employee to Least Effective just to meet a recommended distribution.”

Managers should also “avoid comparisons to other employees (for example, ‘stack ranking’),” the presentation advises. Anderson also said the company’s guidance is for managers to evaluate employees against the performance standard.

However, managers calculate a 28-point “overall value” score for each of their subordinates by grading them based on two rubrics: a seven-point scale for how well they fulfill responsibilities of their role, and a four-point scale for how their potential for achievement compares with other employees, according to the presentation and to an internal memo, labeled “Q12021 Talent Evaluation Packet,” seen by The Seattle Times.

The memo instructs managers to ask, “When thinking about this employee’s future contributions compared to others, where would you place them?” On the rubric, 1 is “below average” and 4 is “exceptional.”

A tool in Ivy divides employees into five performance rungs based on their 28-point score and provides “tailored discussion guides” to support conversations about compensation and promotion, according to the presentation.

Amazon’s performance ratings are primarily used to determine how annual raises are distributed, the AWS director said. In his experience, managers aren’t penalized if they fail to adhere to Amazon’s 20%-at-the-top, 5%-at-the-bottom rating distribution. “It isn’t realistic to pay everybody at the top of the [salary] band, so the rating exercise helps managers make data-based compensation decisions,” he said.

Still, he voiced concern that there weren’t enough checks and balances to prevent managers from giving lower rankings to good employees in order to meet the curve, a practice Business Insider has reported sometimes occurs.

Ivy allows managers to adjust employees’ 28-point performance scores in the same tool that checks whether a team’s scoring distribution matches Amazon’s recommended curve for employee rankings, according to the presentation. The Seattle Times reviewed correspondence from a former Amazon manager in which he described adjusting employee ratings to make sure enough of his subordinates were ranked “least effective” to match the company’s targets.

The “exit ramp” terminology refers to a managed pathway out of Amazon to meet “unregretted attrition” goals, according to a former Amazon employee familiar with the presentation.

Amazon said the presentation seen by The Seattle Times was not developed by the company’s central human resources team. The “exit ramp” terminology is outdated and no longer in use, Anderson said. And underperforming employees are still able to access information about their perceived strengths, which Amazon calls “super powers,” Anderson said.

If low-ranked workers do not improve after the documented coaching, they are funneled into Focus, according to the presentation. A separate Amazon human resources document seen by The Seattle Times shows that the company expects 35% of workers placed in Focus to leave the company, and that Amazon tracks Focus entries in the context of its “unregretted attrition” goals.

Employees who fail Focus are placed in a last-ditch performance improvement plan, called Pivot, that gives workers the option of accepting a buyout or trying again to improve. If they choose to try to improve and fail, their severance payment is lowered, according to a 2019 Pivot entry form obtained through a public records request. Employees can appeal that outcome, but if they appeal unsuccessfully, their severance payment is lowered again.

Within Amazon, sentiment towards the company’s performance review process is mixed. Some employees say the company’s practice of scoring workers against each other and pressuring out the lowest performers improves the overall level of competency.

“Performance improvement conversations are never easy, especially for new managers,” he said. “The idea is to provide data, and the path to addressing the gaps.” He said he would describe Amazon’s employee management system as stack ranking, but said he didn’t think the term deserves a bad reputation.

Other Amazon employees have said the company’s performance review process remains challenging and antithetical to workers’ career development. One former manager, who asked not to be named in order to maintain relationships with people still at the company, said she recently left Amazon in part because annually advocating to save her subordinates’ jobs was “exhausting,” she said.

“When you have to ‘Sophie’s Choice’ your employees, it’s not cool,” she said.