Alaskans should remember Sumner with Seward 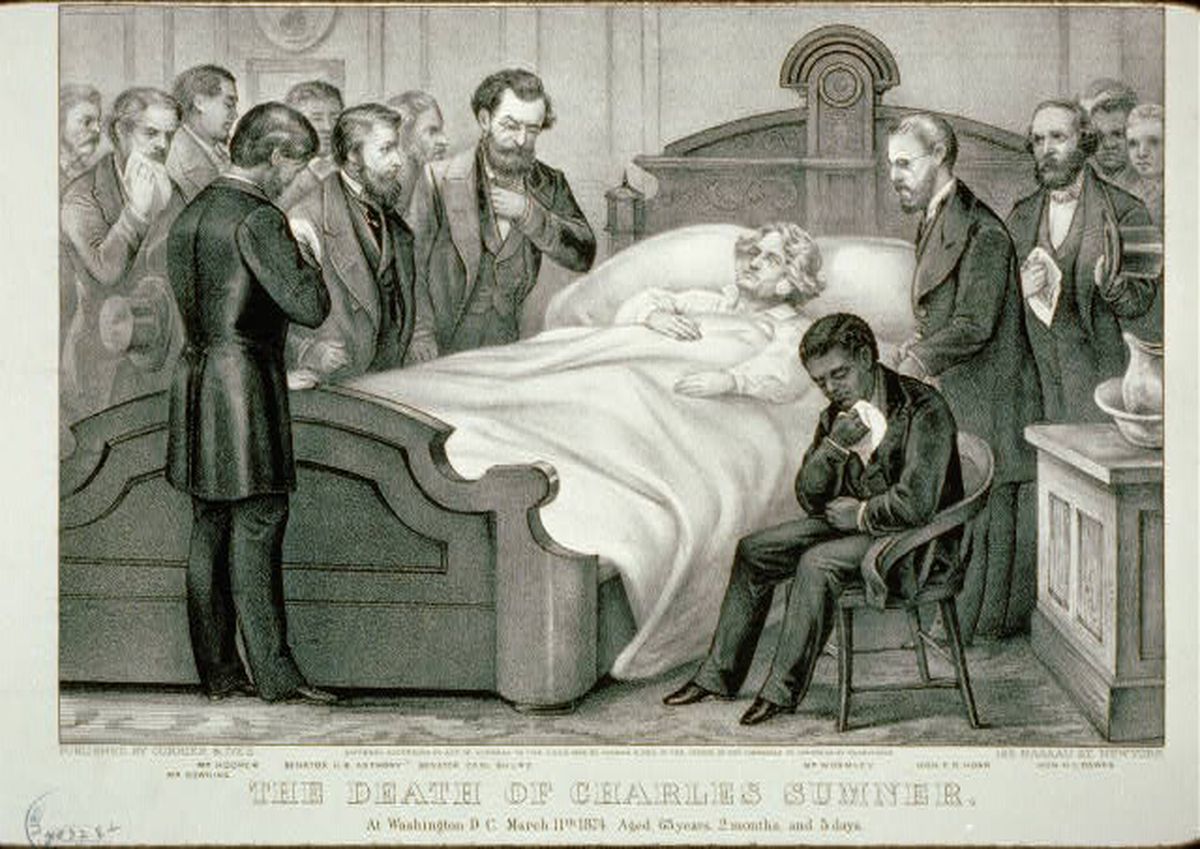 A Currier and Ives print of the scene at the death of Sen. Charles Sumner in 1874. (Library of Congress)

A Currier and Ives print of the scene at the death of Sen. Charles Sumner in 1874. (Library of Congress)

When he died of a heart attack on March 11, 1874, 143 years ago this month, Charles Sumner, the Massachusetts senator who had shepherded the Alaska Purchase Treaty through Senate ratification, lay in state in the Capitol rotunda, only the second senator to be so honored (the first being Henry Clay).

That was not because of his critical, but often overlooked, role in facilitating the Alaska purchase. It was rather a tribute to his long and fiery career as an uncompromising champion of abolition, and full civil and property rights for former slaves.

It was something of a surprise he should have been so honored, for Sumner had fallen out of favor with President Grant and his administration. Sumner wanted to go much faster with Reconstruction of the South than Grant.

But what most created enmity between the two Republicans was Sumner's opposition to U.S. acquisition of the island of Santo Domingo. Grant had submitted a Santo Domingo treaty to the Senate, which Sumner, still chair of the Foreign Relations Committee, regarded as ill-advised, and probably colored by corruption.

It had been negotiated in secret (not by Seward, who retired in March 1869), and Grant had deployed U.S. Navy ships, without Congressional authorization, to intimidate dissent on the island while the talks proceeded.

Sumner investigated, and advised against ratification. Unsurprisingly, the Senate went along with his recommendation, as it almost always had. The honor accorded him in death was a testament to the respect in which he was held by his colleagues, and the country.

[Myths about Alaska purchase have a long reach]

Sumner's role in defeating the Santo Domingo treaty is related to his work for acceptance of the Alaska treaty three years earlier. A large man with a giant intellect, Sumner was his own man, unwilling to play political sychophant.

He did his own study, which was thorough and informed, and followed his own reasoning, wherever it might lead. Had he determined the Alaska purchase was not a good idea, there would have been no Senate ratification of Seward's treaty, and no one can tell what the future of Alaska might have been.

When he learned of the Alaska negotiations (late on March 29), Sumner was noncommittal, and advised against immediate submission of the treaty. But he quickly set out to educate himself.

He called for everything available with which he could inform himself about Russian America. There was a lot. There had been over 60 Russian naval voyages to North America, most of them had carrying scientific investigators, and they all had filed detailed reports.

There were as well numerous reports and papers by English, Spanish, German and French who had been to the Russian possessions and had left assessments.  Sumner read them all, copies of most of which were held by the Library of Congress, others by the new Smithsonian Institution.

Sumner was accomplished in all the languages he needed for his task, except Russian, for which he used translators. Clerks told of wagonloads of books being sent over to Sumner's Washington, D.C., home.  After weeks of study, he became convinced the purchase was a good idea, both for Seward's reasons, its strategic importance, and because he was persuaded of Alaska's own potential in resources.

Now fully supportive of Seward's judgment, Sumner converted his committee, which made a "do pass" recommendation to the full Senate.

When the measure came up for the vote, he reportedly gave a two- or three-hour speech in favor, outlining Alaska's potential (it was not recorded; a long Sumner summary was later published in the Congressional record). His primary emphasis was Alaska's role in facilitating access to Asian markets.

He also stressed that the purchase would rid the continent of an autocratic state. And he addressed the economic potential of the region. His arguments carried the day.

Allies of Grant in the Massachusetts Legislature had succeeded in a censure vote against Sumner for his radical Reconstruction views. On March 10, 1874, his supporters managed to overturn the censure, with Sumner in the chamber. He died the next day.

For his critical role in the U.S. purchase of Alaska, Charles Sumner deserves far more recognition in Alaska than he has received.