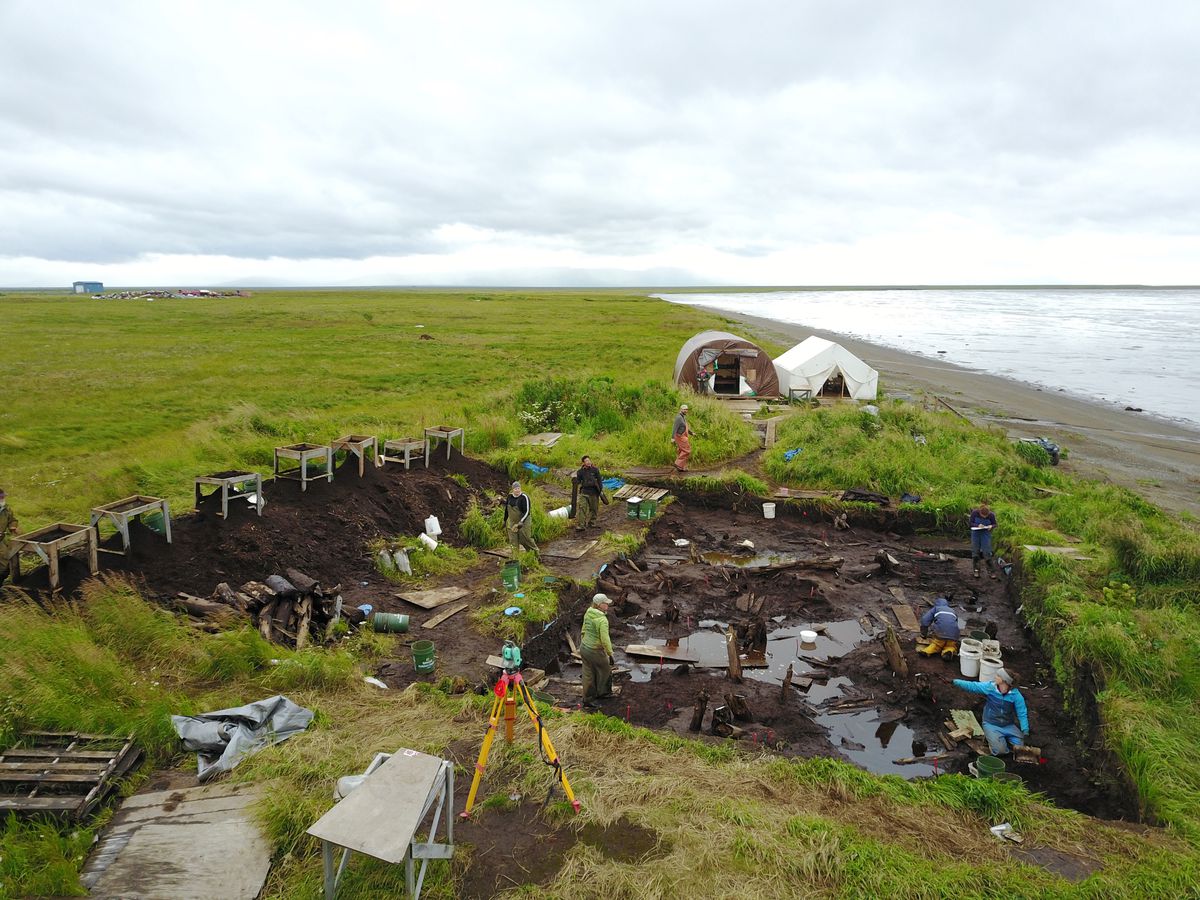 The Nunalleq archaeological site sits next to the Bering Sea near Quinhagak. (Sven Haakanson)

The Nunalleq archaeological site sits next to the Bering Sea near Quinhagak. (Sven Haakanson)

The attackers set fire to the dwelling on the Bering Sea coast more than 350 years ago, trapping people and dogs inside.

Yup'ik oral tradition tells of  fierce battles between villages that took place hundreds of years before the Russian period in Alaska, with incidents similar to this brutal episode.

There is no written account of those who lived and died, but there is a unique archaeological record preserved in tens of thousands of buried items, a priceless puzzle of Alaska history whose assembly is a race against time as permafrost disappears and the shoreline erodes near the village of Quinhagak in Southwest Alaska.

"We found this burned floor with all this burned stuff on it, riddled with arrow points  — absolutely riddled," archaeologist Rick Knecht told Archaeology magazine. "We also found the bodies of people who were dragged out of the house, along with the long grass ropes that were used to do so."

There were women, elders and children who were probably alive when they were taken out of the house and killed outside.

There is much more to this story than the massacre, which took place on a site where people lived for hundreds of  years, starting in about 1300.

It is a tale of survival consisting of customs, traditions and celebrations that people like to remember as well as periods of conflict and confrontation.

[The rush to save Yupik treasures]

Left behind was a treasure trove of items that would have deteriorated rapidly had they been exposed to the air and water — even for relatively short periods.

"We have uncovered grass baskets and mats made when Shakespeare walked the Earth, but when we take them out of the ground the grass weaving still retains a trace of its green color and we have been amazed by the variety and intricacy of the woven patterns," Knecht said to one interviewer.

There are wooden dolls, as well as masks, spears, knives, carvings of wood and ivory and other fragile relics that survived by the grace of permafrost. The very first object uncovered at the site was a wooden doll that still had its original paint.

The site, about 70 miles southwest of Bethel, was occupied at various times from about the 14th to the 17th century, Knecht believes. The crews found multiple layers of old dwellings as they dug into the soil.

For eight years, he and others have been racing against erosion and melting permafrost to retrieve tens of thousands of objects from the site before they are lost forever.

Climate change has brought all this to the surface in more ways than one. The recovery project began after wooden objects began appearing on the shore in 2007, and the village corporation asked Knecht for assistance.

The bodies of victims discovered at the site were turned over to the village for burial. Tens of thousands of items ranging from doll masks to ivory carvings were taken to the University of Aberdeen in Scotland for cleaning and preservation. During each six-week summer excavation season, a worker would uncover a couple of hundred items per day, all of which had to be processed and preserved.

Much of the work has been funded through a grant from the Arts & Humanities Research Council of the United Kingdom.

Now these valuable artifacts are to make a return trip as Quinhagak plans to open the Nunalleq Culture and Archaeology Center next spring.

Starting a local museum is one thing. Developing long-term plans to keep it open for decades is something else because even the land beneath the village, about five miles from the excavation site, is at risk from climate change.

The permafrost created a buried museum, one in which conditions for preservation were ideal for all time.

Or so it seemed.

Frozen ground kept wood and other organic material from deteriorating and protected every item from exposure. Security against theft was not a concern and there was no need to pay for maintenance.

The climate is changing and permafrost is no longer a reliable means of preservation. Rising temperatures and declining sea ice coverage have led to bigger storm surges, with shoreline erosion having already consumed a portion of the dig site.

"Artifacts in the ground form a kind of equilibrium with their environment, frozen or not, which changes when they are exposed," Knecht said.

Village leaders say they will try to create what the permafrost and the ice can no longer provide — a means of preserving part of the past. Knecht said that any artifact in human hands has a limited shelf life, "whether at the largest museums or in a village culture center."

Having the artifacts in the village means they will "have the greatest potential to contribute to the overall quality of life, which is really all we can ask of a material thing," Knecht said.

The village center is going to be a enormous challenge for a community of 600, given the need to control the storage environment and limit changes in humidity and temperature. The corporation is converting an old preschool into a storage and museum site with plans for round-the-clock security.

Maintaining reliable infrastructure that preserves items for decades and allows for dependable long-term management are among the issues that make museums costly.

"If anything happens, it's going to be on me, and that makes me very nervous," said Warren Jones, chief executive officer of the village corporation.

It’s easy to understand his anxiety. Matching the preservation power of permafrost is a tall order.